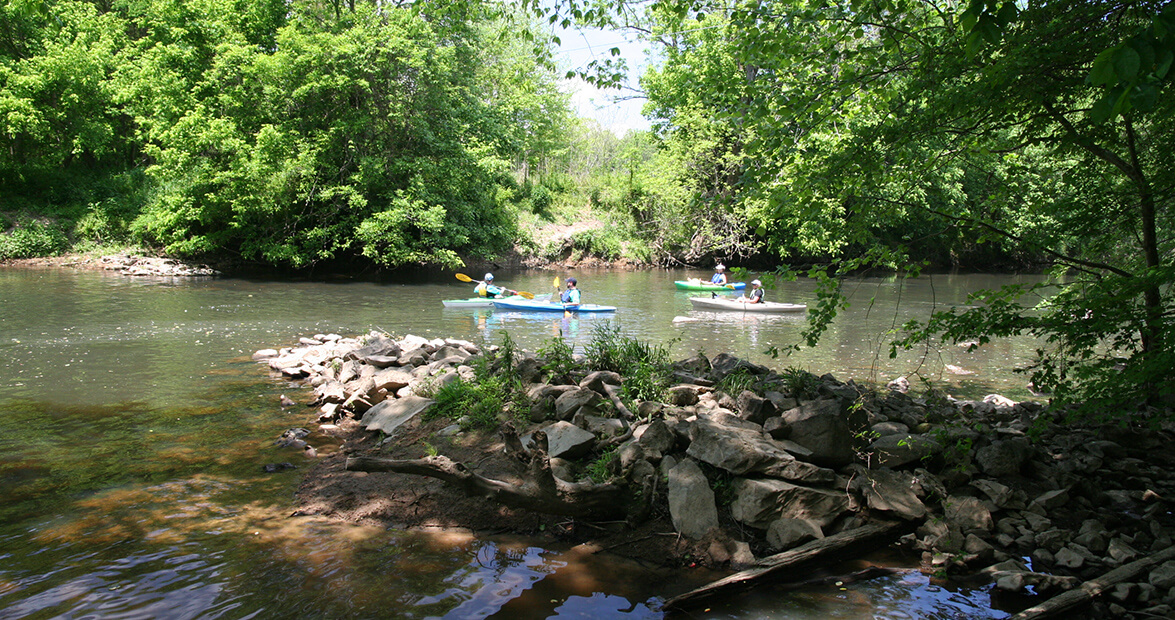 Jacob Matheny would like you to know that he swims in the Haw River nearly every day. While folks who did so decades ago often emerged tinged with dyes from textile mills, Matheny climbs its banks affected only by its natural beauty.

“There are people who still think it’s really polluted, but in the eight years I’ve lived here, I have seen great improvement,” says Matheny, the director of operations and a guide at Haw River Canoe & Kayak Co. in Saxapahaw. “There is a lot of wildlife, too, especially in Alamance County. There’s just no place like it where you can get so completely away from the hustle and bustle by barely leaving town.”

The Haw River has long been a magnet for drawing people to the Piedmont. The area was first occupied by Native Americans, who ate fish from its clean waters and relied on rich soil to grow crops. European settlers later harnessed the Haw’s power for commerce, building the area’s first grist mills. Textile mills followed, along with pollution that soiled the river’s once pristine reputation. Mills flanked the river by 1850 and remained active until around 1980.

In 2006, so many people were convinced that pollution had caused irreparable damage to the Haw that typical conservation practices garnered little community support, recalls Brian Baker.

“It just wasn’t valued the way a resource needs to be to gather people around the issue,” says Baker, founding coordinator of Haw River Trail Partnership, the lead restoration agency, and now director of Alamance County’s Recreation and Parks Department. “The key to that was getting people out to the river.”

Restoration is now being achieved through a partnership of local governments committed to improving the river’s health. Not only have formerly at-risk plants and wildlife returned to the area, but also new businesses have opened that support recreational use of hiking trails and paddling paths. An environmental education center, to be located in a former textile mill, is under development.

“Our goal from the beginning was to make the Haw River relevant to this community again, to bring it back to what it’s always been, which is the economic and cultural center of Alamance County,” Baker says. “It’s not going to replace industry here, or the interstate, but it is an economic driver. Long term, the recreation resource will be as important to job creation as anything else.” 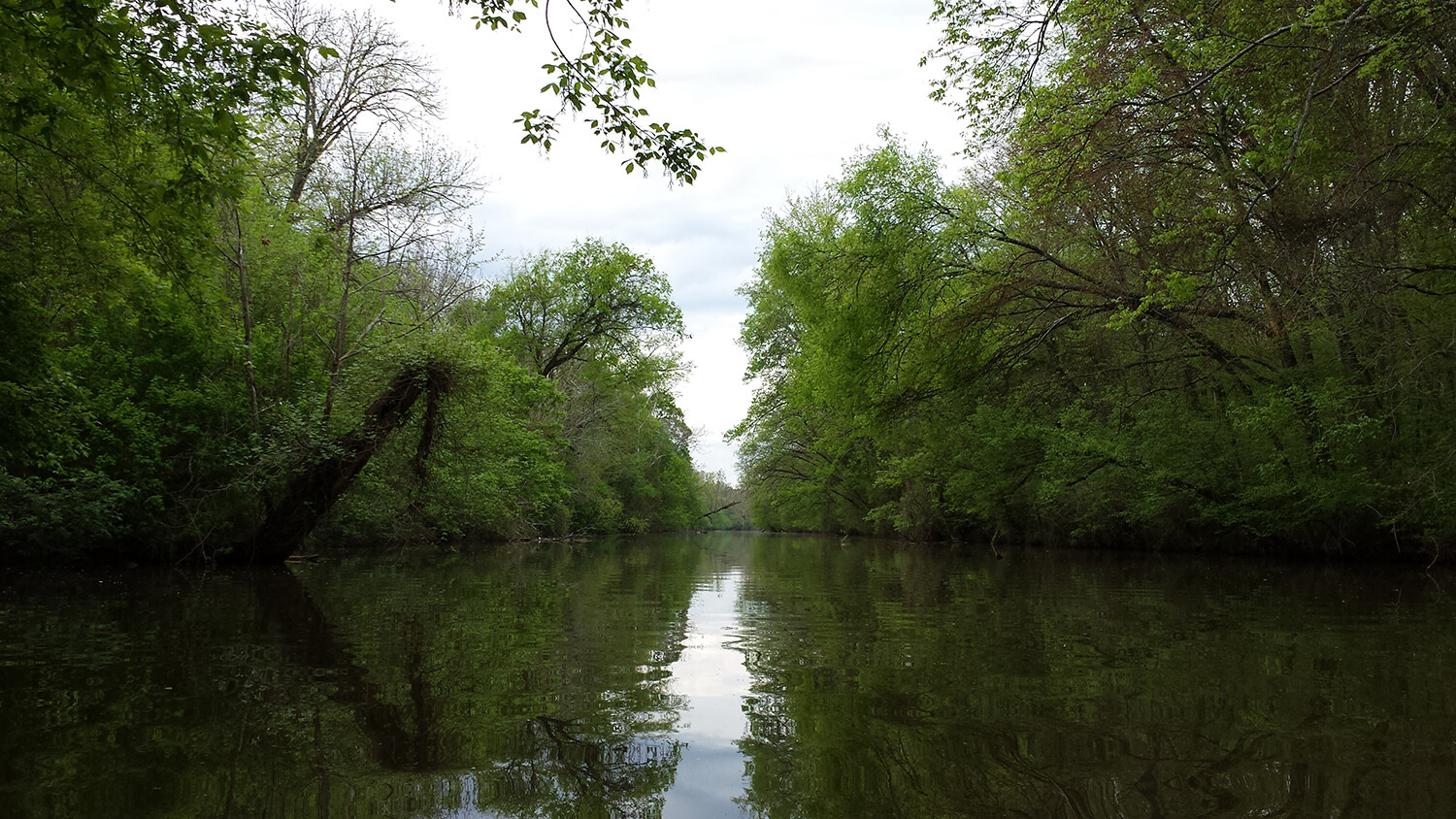 Gary Gerringer opened River Run Outfitters in Burlington eight years ago, when paddlers across North Carolina and beyond began to enjoy the Haw’s improved and lightly trafficked waters.

“People always say how surprised they are by how clean and beautiful it really is,” says Gerringer, a local who remembers going home with red, yellow, or blue skin after a day of childhood splashing. “When mussels come back to the river, you know it’s clean. They can’t survive in funky water.”

“It’s a daily process, but I’d say there is renewed respect for the Haw,” Gerringer says. “If more people clean up as they go, we’ll all be better off.”

Janet MacFall, a professor of environmental studies at Elon University, agrees. With support from students, she has been researching the river since 1999. Early efforts developed assessments and plans used to guide preliminary conservation work, as well as establish the collaborative Haw River Trail Partnership.

“The Clean Water Act (1972) was magic,” says MacFall, who currently is examining the chemistry of agricultural pollutants from tributaries of the Haw River. “Because they don’t have the memory of what things were like before regulations, it’s hard for young people now to imagine what the water was like.”

MacFall is personally invested in the future of the Haw River, as she lives on a horse farm along its banks in Saxapahaw. “I’m very fortunate,” she says. “It gets more beautiful here every year.”

Brenda Wichmann, coordinator of the Haw River Trail Partnership, is also enchanted by the river. She encourages active exploration of the Haw River Trail, which winds 70 miles from Haw River State Park to Jordan Lake State Recreation Area. The upper river is flat and narrow but broadens as it meanders south, picking up speed with rocky rapids and picturesque falls.

“You can choose to relax and enjoy the scenery or really go for it,” Wichmann says. “Either way, you’ll see how clean it is and understand why eco-tourism has become so important for this region.” 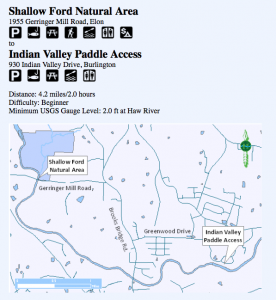 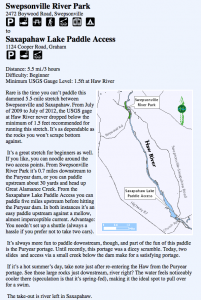 Matheny, who guides hundreds of boaters each season, suggests two paddle paths for novices. One is the Shallow Ford Natural Area to Indian Valley Paddle Pass; the other is Swepsonville River Park to Saxapahaw Lake Paddle Access. These and other paths, along with a river gauge that describes their difficulty level, can be viewed online at hawrivertrail.org.

“Shallow Ford is a cool stretch that’s usually paddleable all year,” says Matheny, adding that the suggested paths are equally appealing for experienced paddlers who enjoy a leisurely pace for appreciating nature. “Up top, it’s narrow with lots of rhododendron and mountain laurel. Downriver, it takes on a different nature with a few outcroppings and rapids.”

The Swepsonville path is a flat-water trip with no current. There’s one portage where boaters need to get out of the water and carry their craft around an old pump house, but Matheny promises the views are well worth the effort. Both paths take about three to four hours, with kayak rentals averaging about $30 to $50.

The middle to lower end of the river, from around U.S. Highway 64 to Jordan Lake, attracts paddlers who enjoy more of an active whitewater experience. “It’s really great after a big rain,” says Bob Brueckner, conservation chair of the Carolina Canoe Club. “There’s one place I go between the Bynum dam and the old pedestrian bridge. If you can catch it at the right water level, it’s a great place to learn. I go there to practice whenever I can.”

Katie Gensel adores every twist and turn of the Haw. The Grants and Communications Coordinator with the Alamance County Recreation and Parks Department, she had such a great time on her first paddle there this year that she bought a kayak the very next day — and another later for her husband.

“I’m still working on getting him out on moving water, but we go out there as often as we can,” says Gensel. “It can be a pain to load up a kayak and drive hours for water access, but there are so many safe and easy access points here on the Haw. It’s a natural beauty, and it’s a great treasure for our area.”