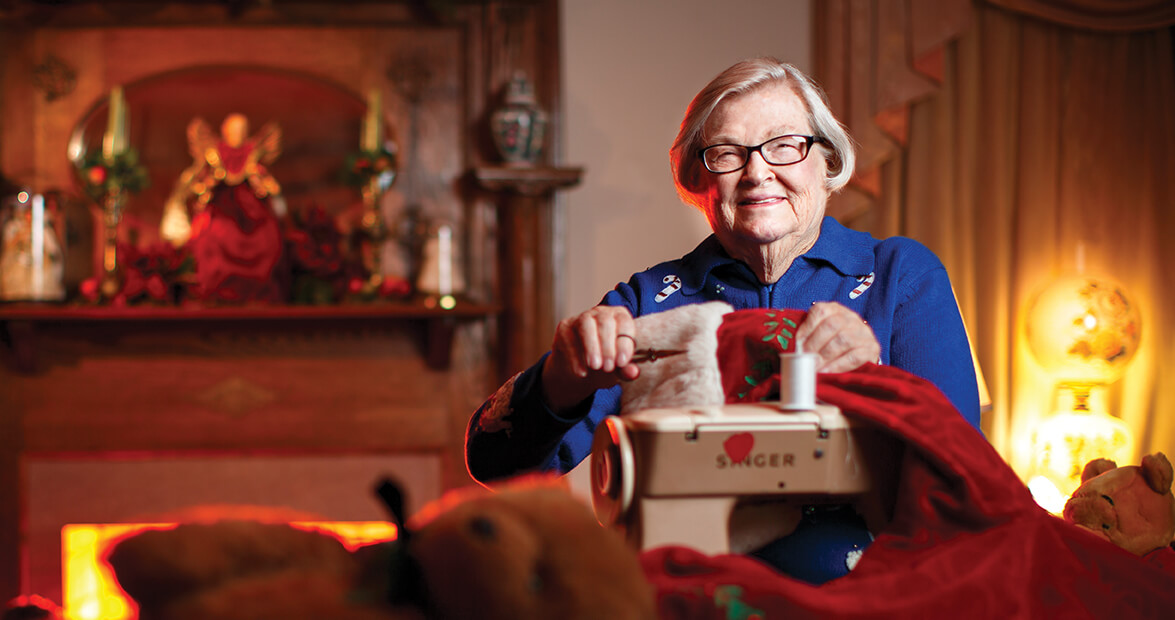 Eva Rae Swing Clark’s worn, wrinkled hands effortlessly guide a sprawling piece of red velvet trimmed with white fur through her trusty Singer. The room is bursting with Santas, prayerful angels, cuddly teddy bears, and other Christmas knickknacks, and Clark looks serene in the midst of the colorful chaos. She has a job to finish — by a nonnegotiable deadline, too — and no one understands that more than the plump, pink-cheeked fellow with wire spectacles and a white beard who’s watching over her shoulder.

“Sometimes I have to let out the seams and make Santa’s pants a little bigger for him,” Clark says, and they both chuckle. The 80-year-old woman from Lexington has been Santa’s personal seamstress for the past two decades, making and mending his suits for the busy Christmas season. This particular Santa is not just any town Santa, but High Point’s Cliff Snider, a 54-year veteran of the ho-ho-ho trade and the first (and only) North Carolinian inducted into the International Santa Claus Hall of Fame.

No doubt the stylish suits in Snider’s closet have had a hand in his success. Clark has been sewing for more than 70 years, and spent much of her adult life teaching students to sew in her home-economics classes in Moore County. “I started sewing when I was 5 or 6 years old,” she says, “and I never really quit.”

In Clark, Snider has found a kindred spirit, someone who enjoys getting creative with Christmas traditions as much as he does. Together, they have designed suits in countless themes. “I like the fact that I have something nobody else has,” he says. “It gives me a little something different to offer.”

Clark’s first sewing efforts were clothes for her cats and dolls. As a teenager, she made her own Easter dress; as an adult, she made her own wedding dress and children’s clothes; and once, she even made a leisure suit for her husband. But nothing could prepare her for making the ultimate suit, one durable enough to withstand all forms of Christmas cheer — from present-hauling to parades — and festive enough to stitch itself into the memories of children. 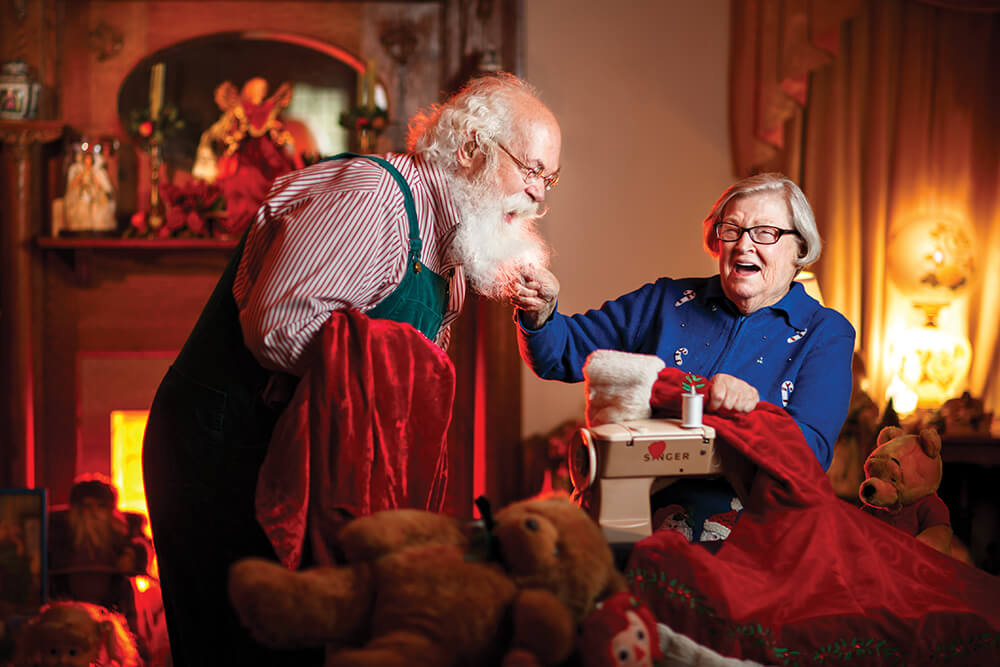 Snider, who donned his first Santa getup at age 15, started out with a cheap suit that looked about as genuine as the fake beard he used to strap onto his face, but as his portrayal of Santa evolved, so did his beard (it’s the real deal) and his taste in Santa suits. A graphic artist and fine-art publisher by trade, he found off-the-rack Santa suits uninspired: “I already had two of those, but I wanted something with custom materials and custom details.”

He met Clark in the mid-1990s at a holiday show in Lexington. “When I found out she was a seamstress, I asked her if she could make a Santa suit for me, and she said she would give it a try,” he recalls. “It turns out she’s quite an artist, too. I would just sit there and tell her what I wanted, and she’d sketch it out and then make it for me.”

“When Santa showed up wearing that suit, people saluted.”

For that first Santa suit, per Snider’s request, Clark created an outfit with a Victorian look. At first, her sewing machine balked at the thick, plush velvet, and she struggled with the furry white trim, but when she finally finished and Snider tried it on, he couldn’t have been more pleased. From that moment on, Snider simply told Clark what he wanted — an embroidered coat, for example, or an SC monogram, or a pocket, or a suit adorned with small, shiny jewels — and she delivered, always in time for the big season. It was like Christmas in reverse, with Santa receiving all the gifts.

“I wanted her to make me a Scottish suit, too,” he says with a chuckle, “but my wife drew the line at me wearing a kilt.” Clark did make Snider a robe from a 100-year-old crazy quilt that had belonged to Snider’s grandmother and mother.

“I just knew the quilting police were going to come after me when I started cutting up a crazy quilt,” Clark says, “but Cliff said he knew that his mother and grandmother would be quite honored.”

Perhaps the most memorable Santa suit Clark made for Snider was the patriotic one she created quickly — in the twinkle of an eye, it seemed — following the terrorist attacks on September 11. The suit, featuring red-and-white striped pants and a navy, fur-trimmed jacket embellished with white stars, was inspired by an 1863 drawing of Santa Claus by political cartoonist Thomas Nast, in which Santa wore a similar costume.

“I had this inspiration that that’s the suit I needed to wear in that year’s High Point Christmas Parade,” Snider says. “I felt like I needed to make a statement of patriotism.”

With the parade scheduled for late November, Clark didn’t have anywhere near the usual six months it takes her to complete one of Snider’s suits, but, sensing the importance of the moment, she got it done. She remembers riding in the car to Charlotte, sewing the stars on the jacket while her husband drove. “The trip from our house to Charlotte is exactly one hour, and I was able to sew one star on the jacket in that hour,” she says. “So one hour, times however many stars there were, that’s how many hours it took me just to put the stars on the jacket.”

There were 34 stars on the jacket, representing 34 states in the Union at the time of Nast’s drawing. “I probably made 50 cents an hour on that suit,” Clark laughs.

Snider loved the end result, as did everyone who saw it. “I never will forget it, because we were all devastated by 9/11,” he says. “When Santa showed up in the parade wearing that suit, people were actually saluting. At that time, we were all about America and protecting America and honoring the flag, and I felt like that suit represented all of that.”

That year, Clark didn’t have a chance to watch Snider waving to the crowd, but she’s seen him in action in other Christmas parades. She remembers seeing him in one of her suits on a billboard at Myrtle Beach, promoting an upcoming holiday show. Last year, she saw him pop up on holiday marketing promotions at Walmart and other retailers.

“It’s really exciting when I see something like that, knowing he’s wearing one of my suits,” she says. “Even if it’s just a picture, I get excited when I see it.”

Clark delights in bringing Snider’s ideas to life, and she’s happy to make necessary alterations as needed — “maintenance,” she calls it — when he’s eaten too many preseason cookies.

She admits, however, that her time as Santa’s seamstress is winding down. The bulky fabrics have become almost too heavy for her to lift, and her hands aren’t as nimble as they used to be. “As I get older, I’ve found a self-threading sewing machine very helpful,” she says.

Snider is quick to point out what a blessing Clark has been to him. “Other Santas see my outfits and want to know where I got them,” he says. “A few of them have even contacted Eva Rae, but she respectfully declined — she decided one Santa suit a year was about all she could handle.”

Which suits this Santa just fine.