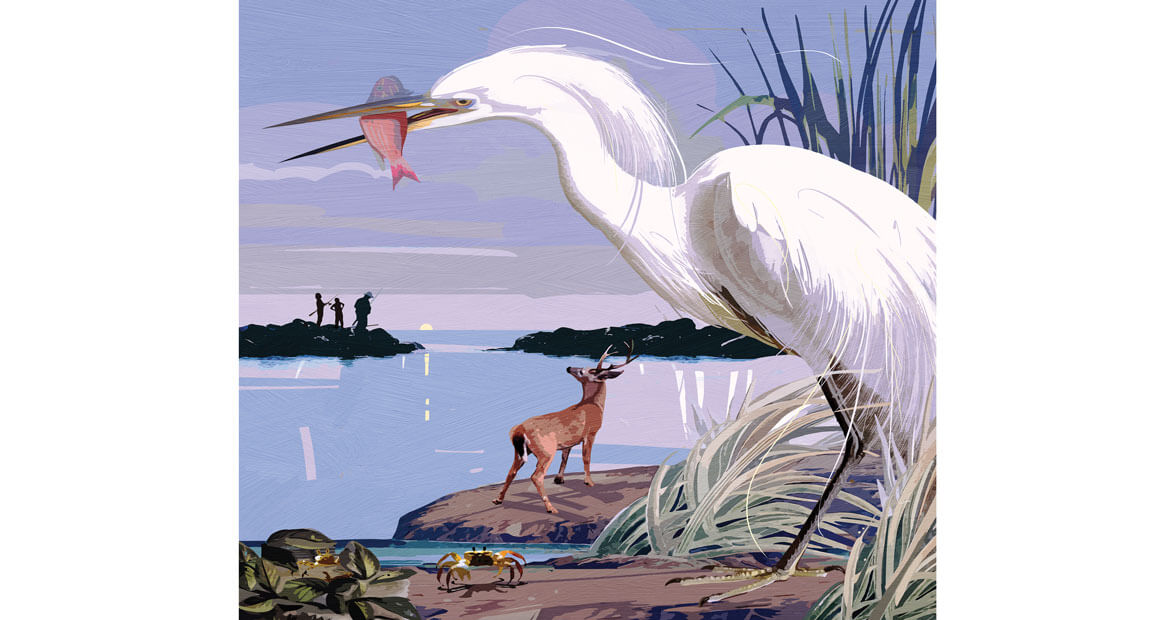 The boat launch at the end of U.S. Highway 421 is regularly full of tanned pleasure-seekers toting coolers of beer and fishing gear, and trailers unloading large boats. Few of them are heading to Zeke’s Island, a small, marsh-dotted patch of land at the scrubby end of Pleasure Island. My sister, Bronwyn, and I arrive thinking we’ll catch a ferry to the island or just take the long way around and walk. A deeply bronzed woman sitting by the dock gives us a funny look when I ask what time the ferry shows up. We’re going to have to row our way out there, she explains.

The island is separated from the Fort Fisher State Recreation Area by an inlet that leads to a series of marshes; a mile or so east is the beach on the Atlantic and a different area called Zeke’s Island Estuarine Reserve. Sea turtles nest there all summer, and there are fishing contests in the surf every October. If you walk far enough down that beach, you’ll hit the eastern side of Bald Head Island. But Zeke’s Island is too far to reach by foot, so it sits apart, silently.

In 1963, my stepfather, David (Bronwyn’s father), was 7 years old. One fall day, he, his 10-year-old brother, Sam, and their father set out for Zeke’s. They carried three fishing rods, a tackle box, and a bucket to keep anything they might catch. It was a trip they made regularly, walking along a jetty built in the late 1800s by the U.S. Army Corps of Engineers. The Rocks, as the wall is commonly known, separates the basin from the Cape Fear River and was a popular place for harvesting oysters in the 1960s, long before the area was closed for such business.

Bronwyn was familiar with her father’s story; she had heard it during one of the many weekend gatherings at our grandmother’s house a few miles up Highway 421 from Zeke’s. But I hadn’t heard the tale until she and I planned to set out on an adventure of our own. I had recently moved back to North Carolina, and the idea of poking around an uninhabited island seemed a good way to reconnect with the coastal memories and landscape of our childhood.

Water swept over The Rocks, jagged and slick. Now, it was fully dark.

As the lore goes, no one else was on the island that day in 1963. While the others fished, David spent most of his time exploring. Zeke’s is a haven for egrets, herons, ibises, ducks, foxes, raccoons, and deer. No one was checking a watch. But as the day waned, it soon became apparent that they’d stayed too long. The tide was up, and their options at that point were tricky: take a slippery, dangerous walk back over The Rocks as the water rose, or venture farther into the island to spend the night with Zeke’s significant mosquito population. As darkness set in, they chose to risk the walk across the jetty.

Today, we’re hoping to avoid a similar fate. Setting off just after lunch, we have plenty of daylight to burn. Our kayak launch entertains most of the people in the parking lot and leaves me caked in the pudding-like mud that lines the shore. To the right: the jagged jaw of The Rocks, reminding us of what could happen.

We paddle against the wind for half an hour before we reach what we think is Zeke’s shore. A few squadrons of gulls and terns start shouting. In retrospect, they may have been laughing: We’ve beached ourselves on a sandbar at low tide. We get out and lug the kayak some 50 yards to another section of water to start off again. Drenched by now in sweat, sand, and sunblock, we feel less like we’re exploring and more like we’re training for some sort of military exercise. There’s nothing to do but paddle on.

Zeke’s must have been otherworldly that evening decades ago, with the nocturnal sounds of creatures all around, hidden in the shadows. David, Sam, and their father left their bucket and tackle on the island and got in a line, holding fishing rods between them. David was in the middle; his father walked behind him. Water swept over The Rocks, jagged and slick. By then, it was fully dark, with no moonlight to see a clear path. Gingerly, the trio made their way back, slipping occasionally but not falling in.

Bronwyn’s recollection of the story looms over our own trip when we reach the island and leave the kayak. It’s eerily still, that slithering North Carolina summer quiet that isn’t so quiet once you realize the cicadas have been chiming the entire time. Giant, spindly-legged spiders nest between shrub leaves; sand wasp traps — those perfect funnels in the sand that ensnare unsuspecting insects — dot the ground under the trees; crabs scatter from the marsh reeds. We look for a clear path to somewhere. It seems pretty easy to get stuck here.

The first path we find fizzles at an old bonfire site littered with beer cans, so we stick to the shoreline, stepping over a city of crabs toward the riverside beach. Animal tracks appear in the sand, most likely fox or coyote, predators of the sea turtles that lay their eggs on the beach by Zeke’s Island Reserve.

As we walk toward another stretch of the jetty, the foam from the brackish water of the Cape Fear skitters across the sand, blown into tiny rolling balls. Bronwyn points out that they look like bit players in a Pixar film, in a hurry to advance a plot somewhere. A long path of concrete rolls out to the island’s tip, and to our left is a series of marsh lagoons. White egrets stand silently in the water, protected from predators by reeds and sharp rocks. We sit for a moment, baking in the late-afternoon heat. We imagine what it would be like to be stuck here.

When David, Sam, and their father finally reached the shore, their car — a VW Bug — was submerged about halfway up its wheels in water from the tide. Their hearts sank — it was a long walk back to their home outside of Wilmington. Just then, headlights came around the bend toward the parking lot. It was their mother, who had come looking when they didn’t get back in time for dinner. She didn’t say anything in the car, but the boys were sure that she would give their dad unshirted hell later for putting them in that situation.

Neither Bronwyn nor I ever met her grandfather. He died 11 years after the fishing trip in ’63, but his wife remained in Carolina Beach. Bronwyn, our brother, and I spent much of our childhood in these waters and on these roads, breathing this hot air, and squinting into the horizon from the beach. And if her grandfather hadn’t decided to make that dark trek on those rocks, we wouldn’t have come to see this island ourselves, tracing the path of the people who raised us.