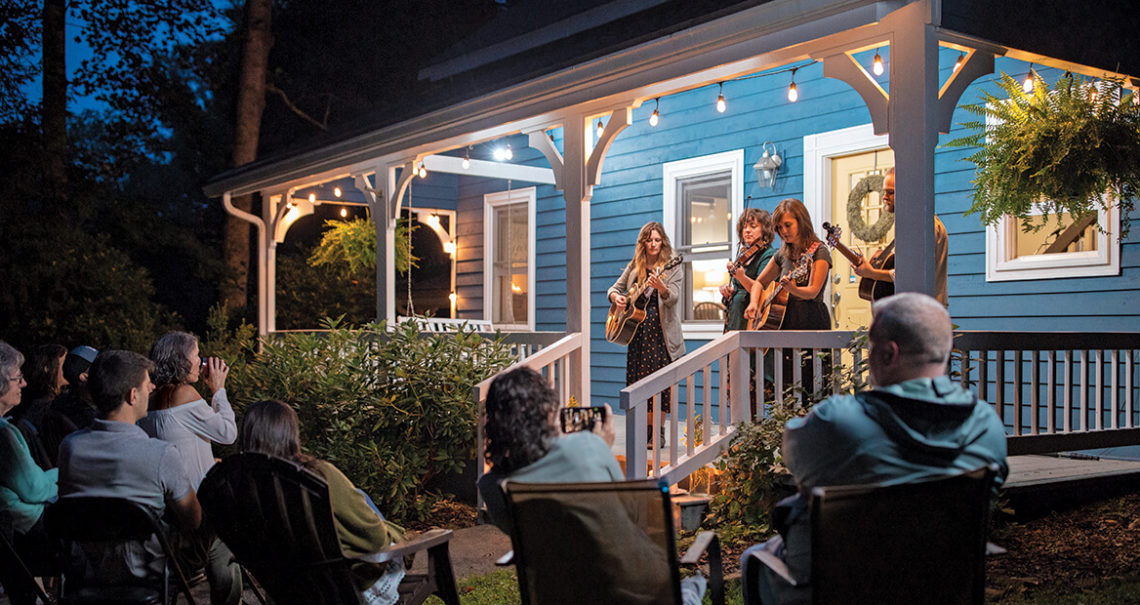 The sweet hum of an acoustic guitar, a feathery soprano voice, and a chorus of buzzing cicadas trickle out from behind the eggplant purple Craftsman-style home in Greensboro’s Fisher Park. Around dusk on Olive Street, people toting potluck dishes and bottles of wine follow the seductive sounds to a narrow asphalt driveway leading to a fenced-in backyard. There, under a canopy of oaks, magnolias, and crape myrtles, about 100 people sit in rows of chairs facing a wooden pergola lined with tiny lights.

The acoustic guitar and voice belong to Laurelyn Dossett, a North Carolina singer who’s written songs for groups like the Carolina Chocolate Drops and lent her writing and performing talents to numerous plays and radio shows including NPR’s A Prairie Home Companion. Wearing a black dress and brown wedge sandals, she’s performing a concert behind the home of her friends Sue Hunt and Jim Halsch. The couple has been staging intimate house concerts in their living room or backyard for the past seven years. They call their series Music at Big Purple.

Earlier, Laurelyn welcomed the audience with a chipper Hey, neighbors! as she strummed the first chords of her opening song, a ballad called “The Vision and the Call,” in which she sings lines like “the snow white-throated sparrow throws her head back and she sings.” Jim had introduced the singer with a few lines of his own, but it wasn’t necessary: Most of the people gathered here are familiar with Laurelyn and her music, just as they are with Jim and Sue and their big backyard. “I know a lot of you are here because of friends, and I thank you so much,” Sue said during her own introductory remarks. “We have so much fun with this, and we feel really honored to have these amazing musicians come into our backyard and play music and share their love of art.”

Concerts held at people’s homes seem to be everywhere across North Carolina, from this backyard in Greensboro to a front yard in Boone, small gatherings in a North Wilkesboro loft space to suit-and-tie affairs at a tony modern home in Chapel Hill. But the idea of house concerts is hardly new. In the 17th and 18th centuries, composers performed for nobility in the parlors of private homes. Jazz was popularized at Harlem house concerts known as “rent parties,” because they helped their hosts raise money for their bills. And Appalachian fiddlers and Piedmont blues guitarists have gathered on porches and in backyards for impromptu jam sessions for a century or more. As Ken Gorfkle, who hosts piano recitals at his Chapel Hill home, says, “The original house concerts were classical: Schubert, Mozart, Beethoven, Chopin — they all played in homes. It wasn’t until Liszt became such a rock star that they wound up creating larger venues.”

In our current century, as music-loving Baby Boomers and Gen Xers have outgrown the blur of downtown weekend nightlife, the number of house concerts is on the upswing. Older music enthusiasts, in particular, find gatherings of friends and family at private homes to be a rewarding alternative to loud clubs or big arenas. For many, this is the way music was always meant to be experienced: intimately, with the people we know and love, people with whom we can sing and clap together without embarrassment, in settings that allow us to get to know the artists behind the music and to hear the stories that inspired beloved songs. It’s that sense of fellowship that draws Tom Hyde and Tracey Ross to Big Purple. “You bring food to share, the hosts are wonderful, and everything they take in goes to the artists — that means a lot,” Tom says. He waves his hand around. “And just look at this beautiful space!”

After Laurelyn finishes her ballad, she announces that the music and lyrics she wrote a few years ago for the Preston Lane play Bloody Blackbeard will be taking her to Alaska later in the week for a theater workshop. As she plays a song from the production, the folks watching from the lawn appear genuinely happy for her.

“There’s a special relationship between the artist and the audience at a house concert,” Laurelyn says. “Typically, it’s people who really want to listen carefully and who want to support and encourage artists. There’s just a warm reciprocity that doesn’t always exist in commercial venues.”

For information on upcoming concerts, call (336) 302-3728 or visit facebook.com/musicatbigpurple.

A line of well-dressed music lovers snakes down the driveway of Ken Gorfkle’s home in a wooded Chapel Hill neighborhood. In the foyer, guests remove their shoes before entering a living room with high, sloped ceilings and shelves filled with books on art, philosophy, and literature. The elephant in the room: a stunning nine-foot Bösendorfer Concert Grand piano. Nearby, world-renowned classical virtuoso pianist Marc-André Hamelin prepares to give a recital of the very same program of Scriabin, Prokofiev, Feinberg, and Schubert that he will perform later in the month at Carnegie Hall in New York City.

Ken can hardly contain his excitement. At 72, the real-estate developer has loved classical music for as long as he can remember. But when he got his Bösendorfer two years ago, he felt compelled, maybe even called, to share his passion. “It got delivered and I’m playing on it and I’m feeling that I need other people in the world to hear this piano. It’s a work of art in every way,” he says. He sought advice on booking musicians from a professional promoter whom he’d gotten to know at events like the Southeastern Piano Festival in South Carolina. Soon, Ken was luring top musicians to his Chapel Hill Piano Salon.

Tonight, Marc-André gives an extraordinary performance, his fingers gliding over the keys like feathers lighting upon leaves of grass. Every move — his arms, his shoulders — is as graceful as a ballet dancer’s. And the emotion on the faces of the people gathered around the piano is palpable. Ken sits in the front row, eyes closed during soft passages, watching with fierce concentration in moments of intensity. “It’s just so intimate, and it’s so personal — the music is so present,” he says. And that’s the way it is for everyone in the room. At a typical music hall, the first row is several feet from the stage; in Ken’s living room, the back row is a mere 17 feet away from the piano. “The farthest seat in my living room,” he says, “is closer than the closest seat at Carnegie Hall.”

For information on upcoming concerts, call (336) 678-8888 or visit chapelhillpianosalon.com.

In North Carolina, the current house-concert trend began slowly but steadily in the late 1990s, when a DJ at Duke University radio station WXDU decided to do here what he’d seen done so successfully in the San Francisco Bay Area. Instead of booking artists at local clubs, he had them play in the homes of volunteer music lovers. The Durham nonprofit 40 Acres Concerts was born, and by the early 2000s, it was booking primarily artists performing alternative country, Americana, folk, and bluegrass, among other roots-music genres. The timing was right: North Carolina had a hot Americana music scene then, with bands such as Raleigh’s Whiskeytown making waves nationally and older folk-music veterans like Alice Gerrard teaching at Duke. Young upstarts, including the Triangle-area singer-songwriter Tift Merritt and the Carolina Chocolate Drops, performed early 40 Acres house concerts before going on to bigger national careers. The 40 Acres concept was compelling: position the artists at the center of a living room, with no stage and no amplifiers, and have them play their songs, chat casually with their fans, and maybe sell a few CDs. Two decades later, 40 Acres continues to promote new artists in private spaces around the Triangle.

Inside a loft space in a 1923 hosiery mill that’s been converted into condos, 31-year-old Joseph “Zack” Brewer is putting out chips, dip, and beer for 20 or so of his friends and family members. At the back of the space, in front of a large window, singer-songwriter Arsena Schroeder of Charlotte tinkles the keys of a small electric piano. Later in the evening, she will perform an intimate set of music from her latest album of soulful folk songs. Arsena hosted her own house-concert series in Charlotte back in 2014, and she still loves to perform in homes. “The difference between playing a house concert and a club concert is night and day,” she says. “At a club, you have to please the promoters. At a house concert, you’re able to connect with a community. You’re playing more for family and friends.”

Zack is relatively new to house concerts. He opened his condo for music in July 2019 out of necessity. Earlier in the year, he had tried to get a Pennsylvania singer booked in a club in the area. He had connections in Boone and North Wilkesboro, and he loved the singer’s music, but he couldn’t persuade any venue owners to bite. “I had told her, ‘I will commit to putting together a show for you if you’ll come here,’” Zack recalls. He felt stuck.

Then he looked around the narrow but large living area of his condo, at its warm hardwood floors, its high ceilings with exposed pipes and ductwork, its low-hanging lights: It was beautiful. And Zack said to himself, Heck, why not do it here?

For information on concerts, call (336) 262-6128 or visit facebook.com/KeyCitySessions.