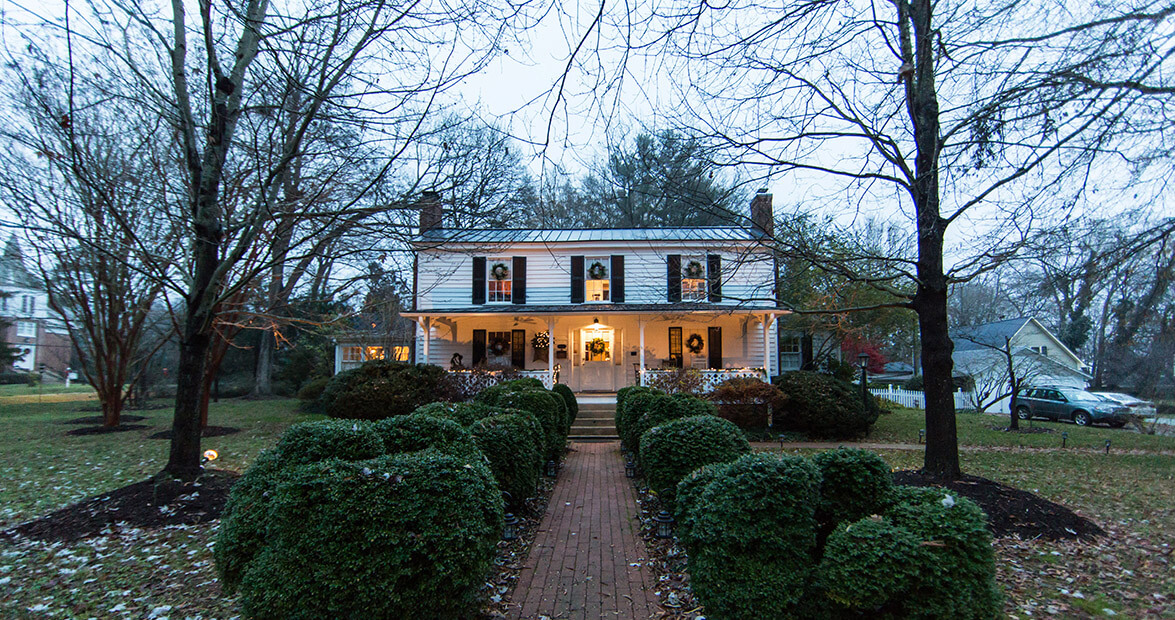 When Ken and Linda Ostrand moved to North Carolina from Pennsylvania, they were looking forward to warmer winters, but they didn’t realize just how warm their newfound town of Hillsborough and their neighbors would be.

“We had a 10-year plan to move farther South, so we wound up in rural Virginia,” Ken says.

“Yeah, for three years because then we had a really bad ice storm,” Linda adds. “We said, ‘Screw the 10 years. We’re going to move right along with our plan,’” she says with a laugh.

It was eight years ago when the couple heard about Hillsborough in a rather serendipitous way. They spent a week combing North Carolina in search of a town to live in that appealed to their love of history. They enjoyed visiting all over, but no town called strongly to their sensibilities. That is, until …

On the last day of their journey, they stopped at a boutique in Pittsboro where someone suggested that they visit Hillsborough, less than a half-hour drive away. It wasn’t on any of the maps they were using, but when they arrived, the Ostrands immediately found the feeling they had been searching for. 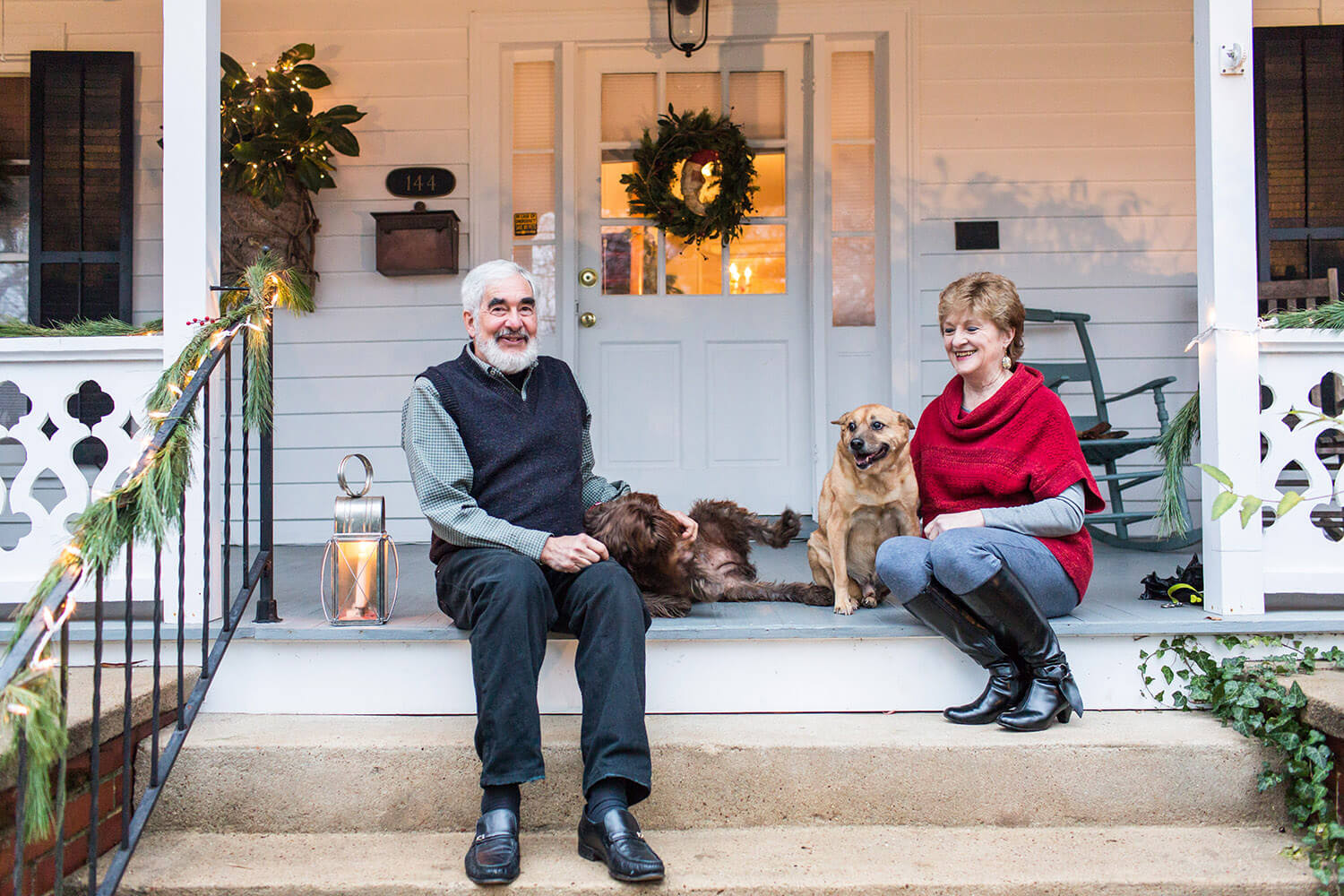 With its quiet streets and old buildings — some of which predate the Revolutionary War — the charms of Hillsborough remind the Ostrands of Williamsburg, Virginia, in many ways.

But unlike Williamsburg, where many costumed interpreters leave town at the end of each day, Hillsborough has an enduring communal heartbeat, shared by more than 6,000 residents, that “lub dubs” just as loudly as it did when the town was the seat of North Carolina government — for one year, back in 1781.

“Everybody was just friendly when we got here,” Linda says. “People said hello to you whether they knew you or not.”

This is the sort of place, Linda says, where you’ll see the mayor picking up and moving aside forgotten newspapers that have collected at the end of a neighbor’s driveway when they’ve gone on vacation. 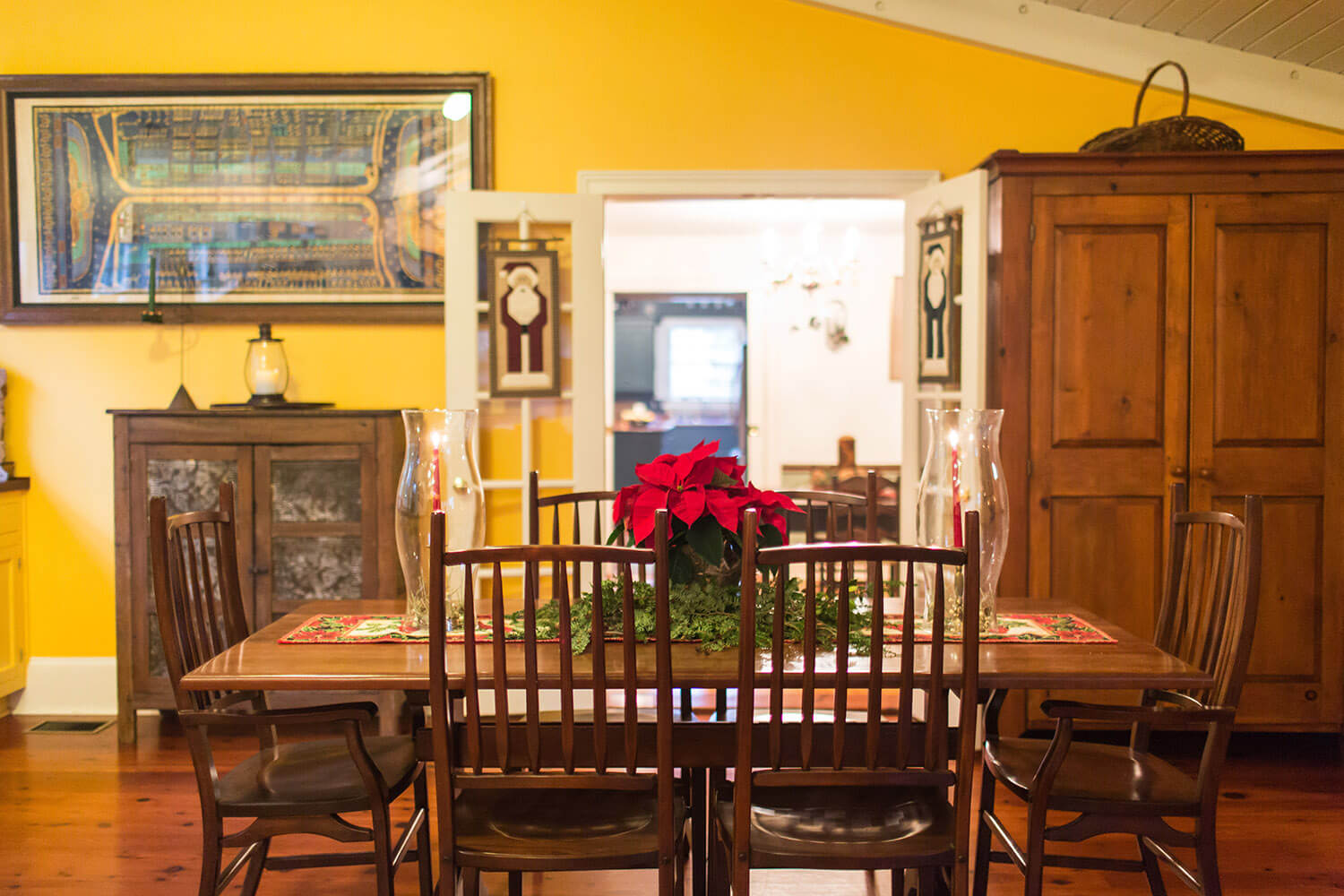 During their first six years here, the Ostrands lived on the outskirts of Hillsborough. Ken was hoping to move into town, but that took some convincing on Linda’s end.

Linda has long been infatuated with old houses, their souls and histories.

When they began their hunt, the historic Ashe House, which is just around the corner from the main drag of Churton Street, was for sale. It spoke to the Ostrands immediately.

“It’s got funny little quirks about it,” Linda says. “The floors shift a little bit. The nails are all hand-wrought. You see these little things in the house and it’s just magical.”

Built around 1840, it served as the home for the descendants of Governor Samuel Ashe. In its earliest manifestation, it had just four basic rooms, two upstairs and two downstairs, each with their own fireplace. Over the years, the house has expanded and received several additions, including a kitchen, bathrooms, and much later, a large gathering room.

There’s a saying that, “The only thing that works in an old house is the owner,” but Linda doesn’t like repeating it. Sure, there are always repairs to keep up with, but the peace an old home offers far outweighs its maladies.

“You still get a sense of the peace it offers. It gives you a sense of what we’ve lost,” she says. “Anytime you can get a little snippet of that back again, it’s really nice.”

With a strong reverence for days gone by, Ken and Linda like to keep the overall feel of the home true to the period in which it was built. 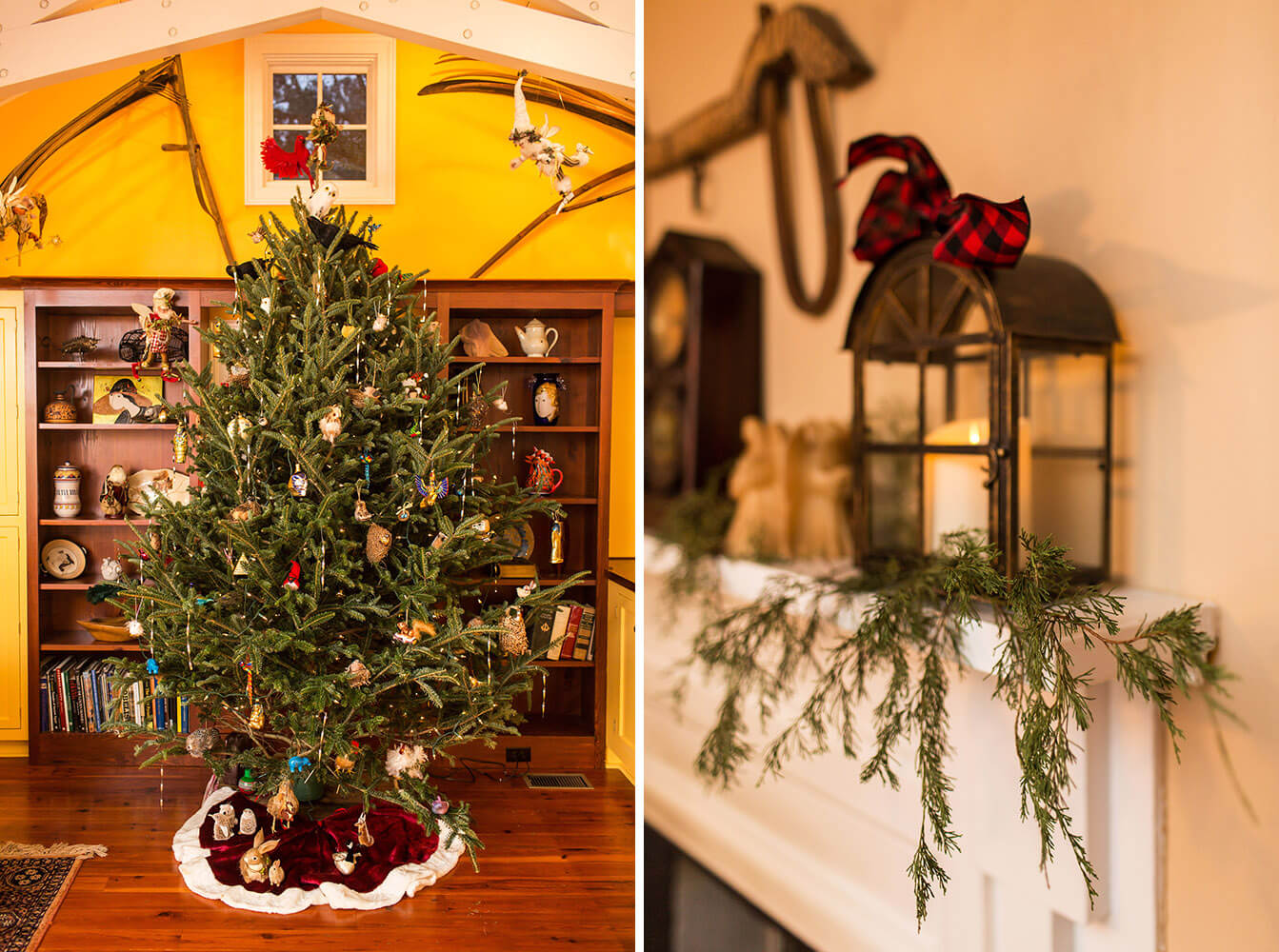 During the holidays, they gather pine boughs and other greenery from the woods and use them to grace the banisters and mantels. They put candles in each room, the flames dancing delicately and casting shadows against the walls. The Christmas tree, with its modern ornaments and lights, is relegated to the gathering room, the newest part of the house.

An old home like this one provides the excuse to indulge in simplicities of the past, and the Ostrands take full advantage.

Each week, they host a soup night with neighbors in the front parlor, which is lit only by the soft glow of candles for the evening. By closing off the doors to the room, the couple keeps the real world out, and yes, that means your cell phone, too. It takes only moments for guests to melt into their chairs.

And when an ice storm caused much of the neighborhood to lose power, the Ostrands invited everyone over to warm their bones and sip hot tea. While most people would see such an outage as an inconvenience, it was a welcome occasion in this instance.

“If the power had stayed out, well, we have a fireplace in there that could keep them warm all night,” Ken says. 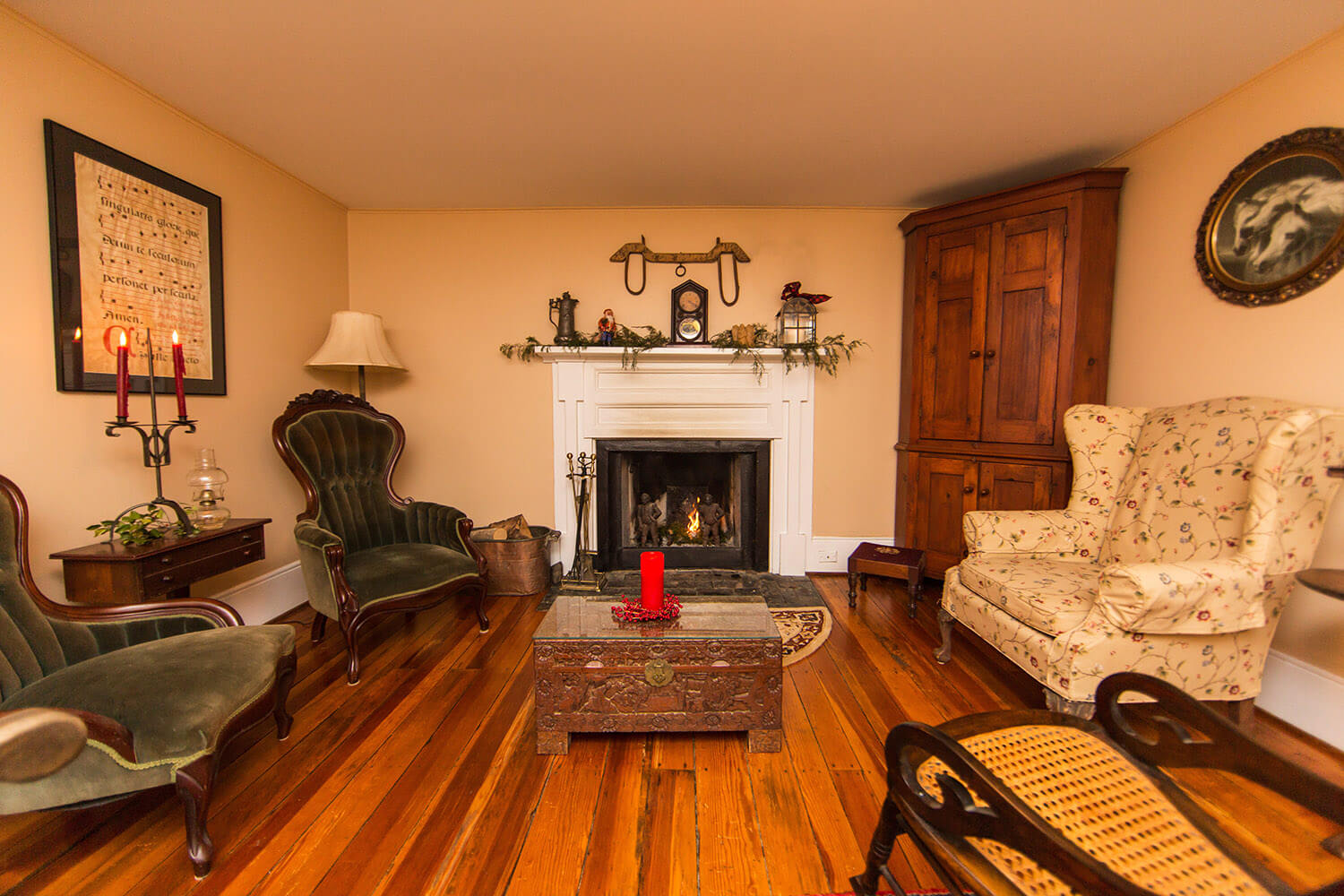 “I cook on the open hearth, so I actually could have cooked dinner, but the darn lights came back on,” Linda adds. “Jeez.”

It’s the old in this house, in this town of Hillsborough, that has the ability to bring meaning to what’s new, what’s important. Gatherings among friends and neighbors aren’t limited to the holiday season; here, they happen year-round.

What’s responsible for the magic in this place? Linda has a good idea:

“I think it’s the combined love — I don’t think love is too strong a word — and appreciation of the people who live right here.” 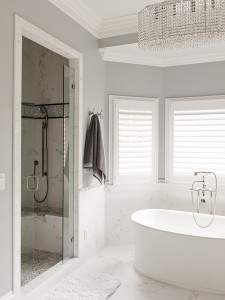 Andrew Roby is the premier custom residential contractor in the Carolinas, serving communities from the mountains to the coast. Specializing in custom homes, remodeling, kitchen and bath renovations and handyman services, Andrew Roby “makes it home” for clients through exceptional quality, craftsmanship and customer service for life.