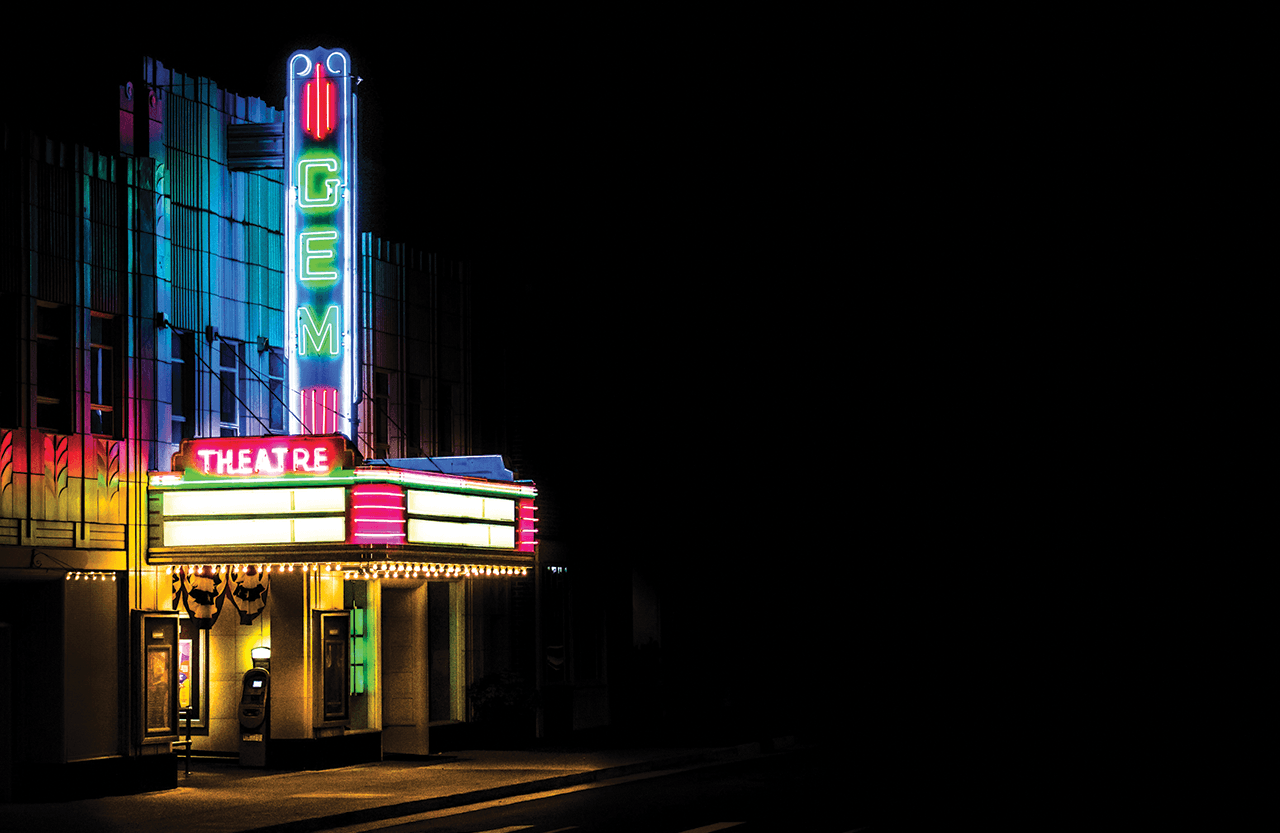 Glittering chandeliers, neon signs, gilded handles, ironwork, velvet, and plush carpet that looks as if it came out of the Taj Mahal — these are all features of movie theaters built before 1960. Enter one, and the theater will transport you into another place, a fantasy castle built with an aura of glamour and imagination.

In North Carolina, and throughout small towns across the country, Saturday-morning serials and first-date anxieties played out in hometown theaters, accentuated with melt-in-your-mouth buttered popcorn, gummy candy treats, and sweet soda that at some point inevitably spilled, careening down the sloping auditorium floor to the edge of the stage, whose heavy velvet curtains were  trimmed in gold and adorned with ornate sashes.

There was a time when the right number on your ticket stub could win you a goldfish or a set of dishes. Our theaters held magic.

Such is the setting of the Earle in downtown Mount Airy. In the 1950s, my friend Howard Greenwood’s mother worked at Lamm’s drugstore across the street from the theater, and Howard and his sister — being the recipients of free movie passes upon occasion — walked the two blocks hand-in-hand to their mother’s workplace from their elementary school. They had 10 cents for popcorn and a nickel apiece for a soda. These first and third graders felt a sense of independence, being trusted to go to the movies with no adult supervision. Howard says he still remembers scooting closer to his big sister Brenda during the parting of the Red Sea scene in The Ten Commandments. 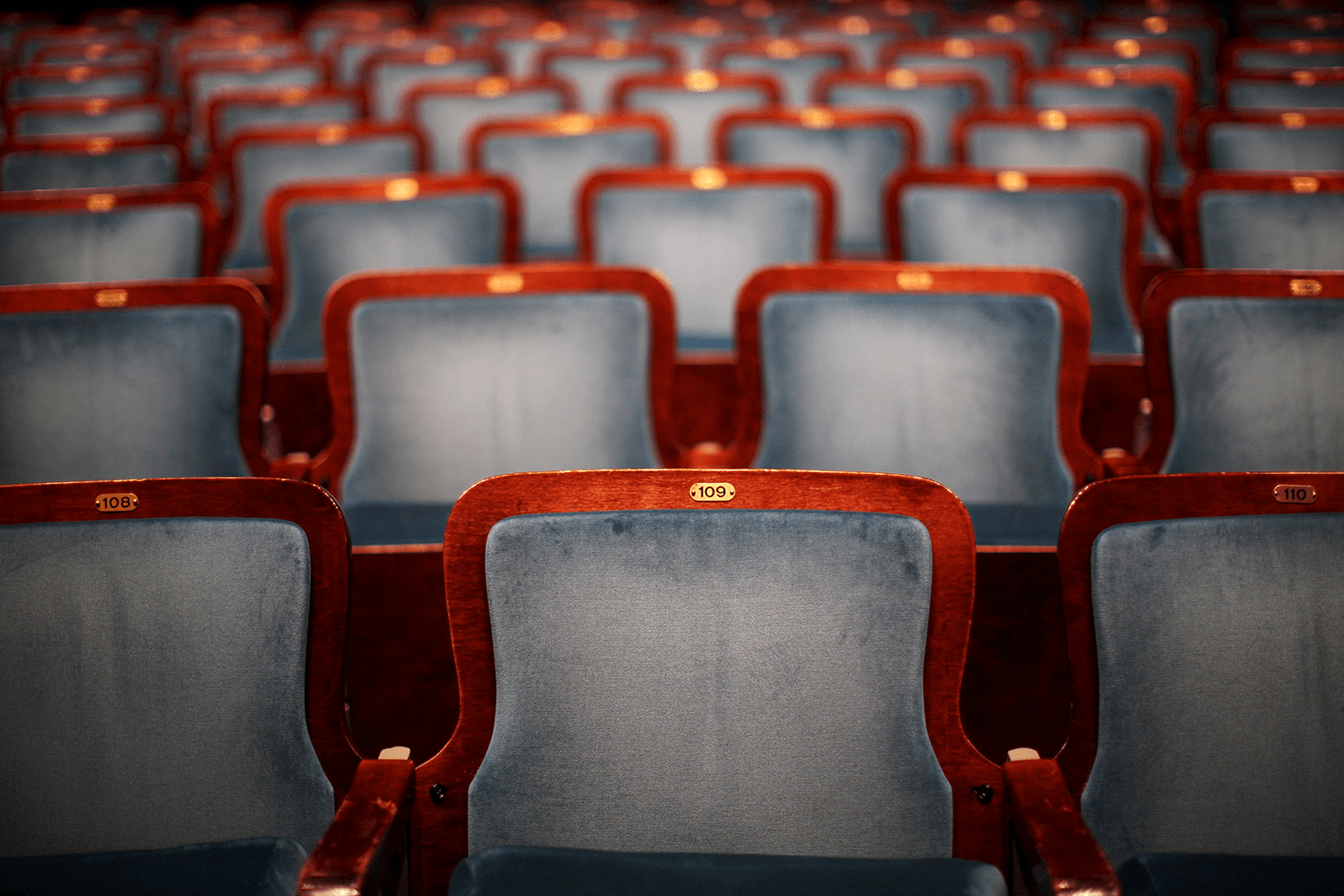 Thirty years ago, a photography instructor gave me the assignment to light a dark interior. I responded by photographing my hometown theater, and I’ve been hooked on these glorious spaces ever since. Vintage theaters and the enchanting illusions within transport us to extraordinary places, just like the movies have always done. And I’ve learned that they all have a story. At the Graham Cinema in Graham, you hear corny jokes in addition to the movie times if you call the recorded message. At the Kirby Theater in Roxboro, a beautiful lobby mural depicts the local landscape of area textile mills and farms. Even theaters that have been closed 50 years have a story. Talk to Michael Slaughter, owner of the DPC Pawn & Gun Shop across from the Person County Courthouse in Roxboro, and he’ll tell you the history of The Palace, a theater that sat two doors down from his store. He’ll point to a painting of a stained-glass window with the words “The Palace” inscribed on the building front. To everyone who grew up here, that painting represents the hope that this once-magnificent theater, with its extraordinary, curved, and decorated pressed tin ceiling, will someday reopen.

The Turnage Theater in Washington has seen that hope realized: The Beaufort County Arts Council purchased the theater and this year reopened its doors; it’s now home to the arts council and the public may again enjoy this magnificent building. Within hours of the sale going through, word on the street was that the theater had been saved, thrilling town residents who had feared the theater’s demise. My recent visit to Washington was on the day of the sale, and the only person who didn’t tell me about the theater was our server at dinner, but I told her.

In Spruce Pine, the Carolina 2 sits and waits for the same fate. Its stage and seats have been restored, and because the town is flooded every summer with people from around the world who come to workshops at the nearby Penland School of Crafts, the locals are hopeful that someone will fall in love with the area and the theater and will complete its restoration.

In Tarboro, the Colonial Theater, with its glass chandelier still hanging in front of the ticket booth, stands as a testament to determination as well. The 1919 building is owned by the Edgecombe County Veterans’ Military Museum in downtown Tarboro; on the side of the theater, a block-long mural depicts America’s wars. A Friends of the Colonial Theater group has not completed the renovation inside — but that hasn’t stopped them from having musical tributes to U.S. troops while their fund-raising efforts continue.

Choosing a favorite among these is impossible, but a true treasure is the Gem Theatre in Kannapolis. When I visited the town on a weekday morning, I had little hope of seeing the inside — until a school bus pulled up in front. I realized that the theater was opening for a special showing of The Lorax for the children in town. I raced to the door, beating the kids inside, and quickly asked for permission to take some photographs before the movie started. Art Deco architecture is a favorite of mine, and this theater, with its curved door handles; round windows; and detailed, carved-stone facade, epitomized that era.

And across the state in New Bern, another gem sits underneath the Masonic lodge, tucked into the far south corner of the building on a street so unassuming you might miss it. The Masonic Theatre served the New Bern community from 1805 until 1974. Before its time as a theater, the Masonic served as the place for civic gatherings and plays, concerts, vaudeville acts, and even a hospital when Union forces occupied New Bern during the Civil War. Frances Jaiman, a local resident and supporter of the renovation effort for the theater, even showed me the secret passage with stairs and a dirt floor that led from the back of the building to behind the stage — perfect for a town filled with so much history.