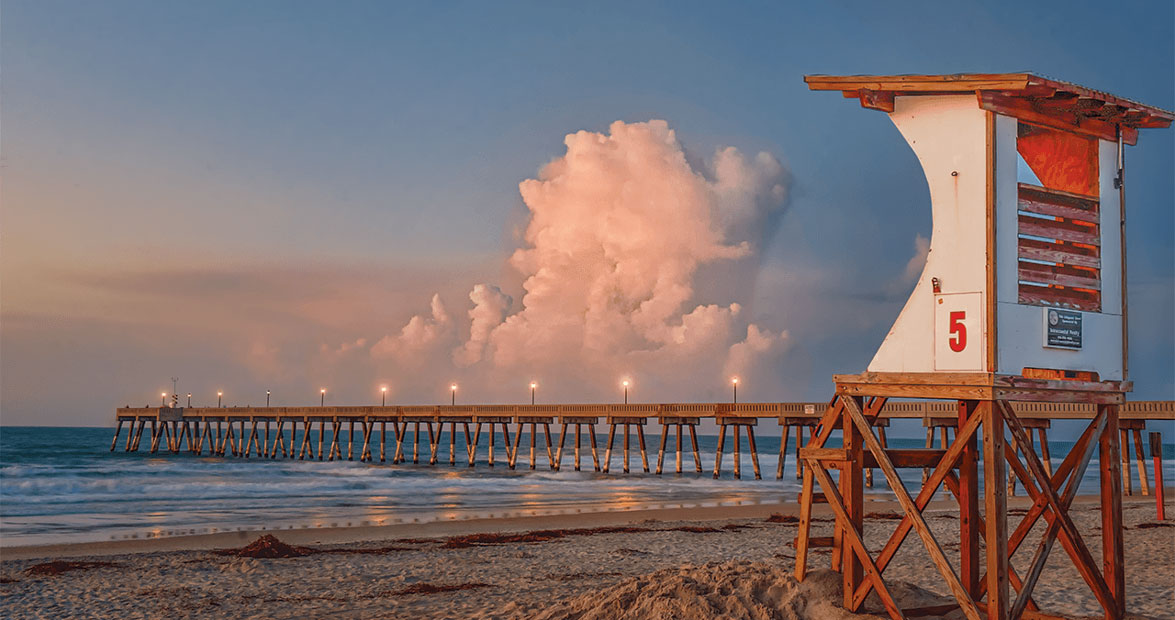 By late afternoon, you’d know. A scratchy tingle across the shoulders, the shiny stretch of reddened tautness. By supper, you were in the full throes. The seared skin behind your knees, hinged on a stool or chair, was agony. To shift in your seat meant painfully pulling the flesh of your thighs across paint-clogged wicker, or plastic that had somehow become adhesive since breakfast, movements you’d never even been conscious of hours before. Shivery chills raised the hair on your arms and called for a sweater, but anything against your skin — anything at all, even the accidental graze as someone passed the cocktail sauce — was excruciating. Your sister stabbed your shoulder to watch a quick bloom of paleness grow red again beneath her finger. You looked at the bowl of feathery white shreds of crabmeat, edible treasures that only hours before you’d coaxed from their hiding places with intricate instruments, leaving your fingers whitened and wrinkled, and thought you might throw up if you ate a single bite.

Of course there was Sea & Ski (though you’d have preferred Coppertone. Coppertone was much cooler, with its distinctive smell and brown tube), but not nearly enough of it. And you’d jerked away from the application anyway, eager to return to your drip castle before the tide came in. Eager to return to riding the waves sideways on the faded blue canvas raft with the bright yellow rubbery ends, which had been repaired just that morning with the kit of precut patches applied with glue smelling deliciously of Magic Markers. Eager to return to the game of gin with your cousin, played with thick, heavy cards that, though impossible to adequately shuffle, never blew away from the clever magnetized board. Eager to return to your towel on the sand, to Nancy Drew and The Clue of the Dancing Puppet to see if she and Ned Nickerson would ever kiss, simultaneously longing for and hoping against that moment.

And you’d stood under the umbrella, hadn’t you, out of the sun? Stood with your father while he pulled a Schlitz from the Scotch cooler, whose rounded brown- and black- and red-plaid metal sides were pockmarked with dents and silvery scratches inflicted by a rusty bottle opener permanently knotted to the plastic beige handle. You’d knelt beside the cooler, used the “church key” to puncture a perfect triangle in your can of V8, and chugged down that cold, salty, viscous liquid like elixir from the gods, while nearby your mother sunbathed, wearing bulbous black plastic eye-guards across the bridge of her nose. When you’d laid on your back, letting the sun dry your bathing suit, hadn’t you pulled a towel across your face as protection? You’d opened your eyes inside the heated terry cloth to watch little amoebas swimming across your vision, thinking, this is the closest I’ll ever come to seeing an atom.

And you’d had to go crabbing, hadn’t you? The activity was made for you, for the necessary silent patience of kneeling on the splintery boards and slowly, slowly bringing up the weighted, twine-tied chicken neck from the murky depths below the dock. Watching the chicken skin float whitely in the slight current, a curved claw attached. The slightest change in steady tension, and with a swift scuttle, the prize would vanish. A sudden whomp! from beneath with the net and you’d slammed the captured creature into the plastic bucket. And again. And again, occasionally kicking the bucket to watch the crabs clatter atop each other, threateningly raising and extending their pincers. Forgetting all the while how your bathing-suited back was exposed, vulnerable, utterly naked, until later when, standing at the stove, horrified with what-have-I-wrought realization at the frantic clickityclickity clawing of the crabs visibly boiling to death beneath the clear glass lid, the fiery escaping steam assaulted your cheeks and upper arms and … you knew, at 7 years old, and 8, and 10, and 12.

And now there was nothing for it but the wretched night ahead, mitigated only at the outset, when the Solarcaine bottle was fetched from the fridge and your mother squirted a thick, cooled stream of aromatic cream whiter than snow, whose mentholated scent was as familiar as calamine, across the unrecognizable expanse of heat-radiating flesh that only this morning was your back and was now, quite literally, untouchable. She smoothed it, summer’s salve before there were gels and sprays, and adjusted the nearby fan, and you lay there waiting for the manufactured breeze to oscillate its way back to wash over you, praying for the deliverance of sleep, and that you wouldn’t have to turn over in the middle of the night, when even the thin fabric of your nightgown would tug painfully at scorched skin.

Here were the beach vacation options: You rented a cottage, or stayed with family who owned a house, or stayed in a motel. We did them all at one time or another. From Rutherfordton, the coast — any coast — was a haul, and my sister and I colored “Beach or Bust” signs and taped them to the station-wagon windows. In those heedless, unregulated days, we passed the long hours on the highway on a mattress my parents fitted in the Way Back, our own kingdom behind a moat of luggage and groceries in the middle seat. One of the two times I nearly strangled my sister to death took place on one of those trips, as we craned and crawled over one another and viciously competed to be the first to claim, “I see the ocean! I see the ocean!” Beyond emporiums with outdoor wares of Styrofoam cooler stacks and flapping towels pinned to rigged clotheslines, the residences finally appeared, bearing plaques with divine names spelled out in ropes or shells: Shore Enuff, Run-on-Inn, and the one I never tired of, Dun Roamin’. (“It’s ‘Finished Roamin’,’ ” my father would correct, just as he always corrected the possessive punctuation of The Franklin’s, a practice I helplessly, faithfully practice today.) The rental cottages were one-storied, on stilts, with dark, paneled interiors; straw rugs; galley kitchens; crank-out windows fogged with brine; a television with tin-foiled rabbit-ear antennas; and a cabinet crammed with Sorry!, Scrabble, a Ouija board, Monopoly, and, if you were lucky, The Game of Life, with all its plastic cars and pink or blue people-pegs intact. Sand was everywhere: in your scalp and in your cereal, a gritty embedded presence in the soap of the outside shower and, of course, between the sheets, rasping like sandpaper as you crossed and uncrossed your (sunburned) limbs. You really could only get seafood at the sea in those days, though a fluorescently lit restaurant with raw-board floors and the questionable name of Sanitary Fish Market did nothing to allay my I-only-eat-grilled-cheese-sandwiches fears.

Then, at 14, you visited a friend from camp. No more enforced rest periods. No more putt-putt on green felt saturated from rain (because, of course, you only played putt-putt when it had been raining and there was nothing else to do). Instead, you zipped across the sound in a small Boston Whaler your friend navigated as competently and effortlessly as a bicycle. Instead of being on the beach, you spent the day hanging out on a yacht-club pier, then rinsing off in a dim, ancient bathhouse illuminated only by sunlight slanting its way through imperfectly aligned wooden slats. Overhead, new friends squatted in the rafters, smoking, light-years ahead in confidence and insouciance. By day, you wore baby-doll bathing suits; by night, you wore hot pants and Dr. Scholl’s sandals and halter tops you’d made from folded bandannas and lengths of ski ropes. You swayed and sang along to Junior Walker & the All Stars and eyed boys across the concrete floor of a bar you were permitted to enter with someone’s older brother. “Can’t we go on the beach?” you eventually begged, because you were a mountain girl, dying to jump a wave, find a sand dollar, stay a child. “Sure,” your friend said, and turned back to the jukebox.

So you walked the next day, walked and walked, contentedly alone and free to sing aloud, protected by the noisy constancy of the waves from the humiliation of being overheard. You wore precautionary zinc oxide and a shirt, because a burnt child dreads the fire, and you tried to slow time before the beach party planned for that evening that you dreaded just as much.

But by late afternoon, you knew. Not the back this time, or the shoulders, or the thighs, or the nose, but the forgotten tops of your feet. Tender, taut, fiery, raw, and for that night and a week afterward, too distended for shoes of any description, too painful to even stand without wobbling. You stayed home, lying on the (sandy) floor, and clumsily alternated your poor, swollen feet between basins of ice water and air-conditioning vents. It would be my final sunburn, and it had saved me one final year from growing up.

“Stock market still going up and down? Arabs still fighting the Jews?” my father routinely asked anyone who bothered with a newspaper at the beach, his way of saying that nothing ever changes. And some things don’t. There’s still only one way to build a drip castle: through your fingers, with just the right consistency of soggy sand. To catch a crab, you need only chicken necks and a net. You’ll never find the perfect butterfly wings of a periwinkle shell unless you walk the beach, peering, stooping, reaching.

But most things do change.

One family trip to Nags Head, my mother bemoaned the loss of something she called “Old Nags Head.” Over and over: “Old Nags Head has gone.” Who cared? I just wanted to see the biggest sand dune in the world. Similarly, I see now, every summer at the beach my father would reread his copy of Sloan Wilson’s A Summer Place. He’d whistle the movie’s famous theme song and suggest I read the novel, too. But to my mind, books with cracked spines and no dust jackets were on a par with Dickens, and besides, I was too engrossed in The Godfather, intrigued by my father’s claim that one character was meant to be Frank Sinatra. Who cared about watching A Summer Place on television? I cared about trying to sneak, underage, into Summer of ’42 with someone I had a crush on.

But now I know. I understand why my father clung to his ritual reading, why my mother mourned for listing, unpainted beach cottages. These tangibles represented personal memories; they forever crystallized a feeling and an experience and a vanished era. My children don’t yet understand why I solemnly croon along to “What Does It Take?” But they will.