Cash money for babysitting and weed-pulling was all well and good, but at 18, I was finally, legally, officially (if seasonally) employed as a waitress at a mountain resort near Elkin. For two weeks, I’d been lifting, lowering, and carefully rotating handled trio tubs of “Butter, sour cream, or bacon bits?” in my right hand and “Thousand Island, blue cheese, or Italian?” in my left. Now, I held my first typed, crisp, perforated proof of labor — and something had gone terribly wrong. Someone named FICA was apparently entitled to a chunk of my paycheck. My father’s grinned observation was, “Welcome to the big leagues.” Three months of the 6 a.m. breakfast shift (“Strawberry, grape, syrup, powdered sugar?”) stretched before me like a sentence.

But by the time you’re a real adult with a year-round job, your efforts get officially, federally recognized — as they have been since 1894 — with a day off from your toils. While not exactly sweet revenge, that first Monday in September, dedicated to lazing instead of laboring — and being paid for it — is still pretty sweet. 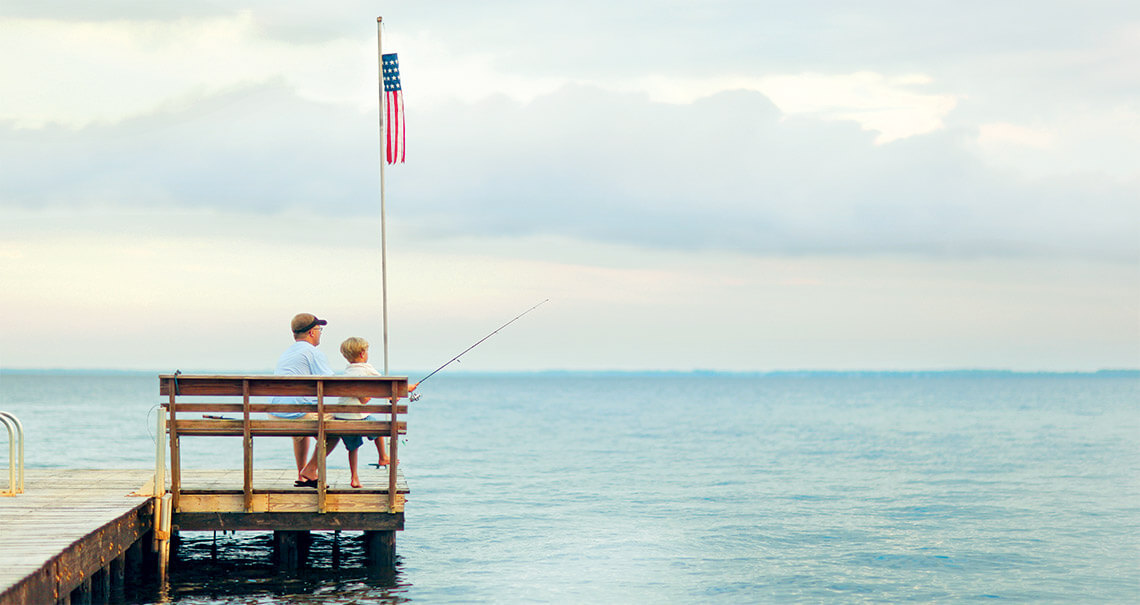 Observing the unofficial end of summer doesn’t require a festival or parade. If you’re fortunate enough to have the first Monday in September off work, a day of leisure fishing is celebration enough. photograph by © KELLY KNOX/STOCKSY UNITED

And while storm windows and leaf-raking, puffy jackets and frosted windshields are still far away, you know. You know that this sandcastle will likely be the last one you build, that this hike will be the last one before yellow leaves float by in the stream, that the okra will shortly give way to pumpkins at the farmers market. Evenings on the terrace, you hear the oom-pah of high school band practice rather than the baseball stadium’s muffled announcer. The local swimming pool will be drained to a gaping white hole and shutter its snack stand. And wasn’t the last breaking wave you boogie-boarded just the tiniest bit chillier? Whatever its official capacity as a national holiday, you know that, unofficially, Labor Day marks summer’s end.

Ironically, the very busyness that Labor Day seems to demand — new movies, new teachers, new clothes, sporting event schedules, fall getaway plans, the gamut of gearing up for a new season — can overshadow a day meant for relaxing. Don’t let it. Instead, devote the holiday to recollecting, to fondly looking back at another glorious North Carolina summer you were allotted.

Remember the accomplishments. You taught a teen to slalom, to pitch a tent, to do a flip from a diving board. You helped a child ride a two-wheeler or discover a four-leaf clover while the dew still dampened the grass and his hands were still sticky with strawberry juice. Your first stab at making homemade hush puppies was a success, if you say so yourself, and so were your attempts at throwing a bait net. You’re pretty sure no one else had ever happened upon that particular waterfall in that sun-dappled stream.

Remember the guilty pleasures that somehow only summer permits. That extra scoop of mint chocolate chip or large order of seasoned fries. The beach books whose plots you’ve already forgotten but which spirited you away to England or California while your bare toes kept the glider gently to- and fro-ing. Who cares? War and Peace will still be there next summer. The night you opened all the windows for the breeze, never mind the air-conditioning humming through the vents. The daily trip to the Dollar Store with the grandkids for Big League Chew and Blow Pops. 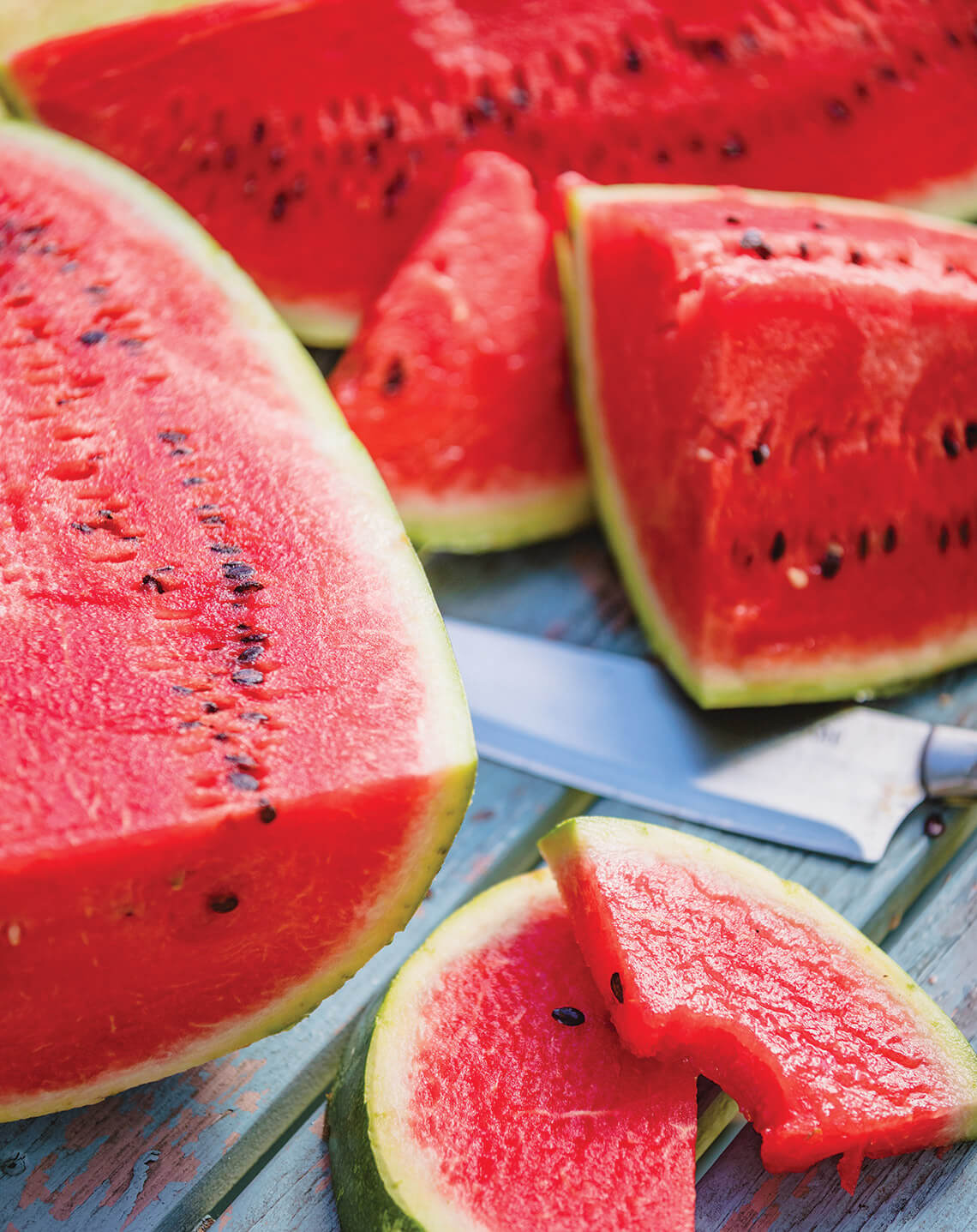 If summer has a flavor, it just may be the sticky-sweet juice of a ripe late-season watermelon. Cold and crunchy, each bite is a delicious reminder of the joy of the season. photograph by Baxter Miller

And, oh, the people who populated your summer! Reunions, at last, with cousins, or the folks next door who always rent the same week as you. Giggles around the grill, teasing around the table, charades and scavenger hunts and Scrabble and Old Maid. Watermelon seed-spitting contests. Singing, finally, around a campfire, belting out “The Star-Spangled Banner” from a bleacher with your best buddies, or a one-hit wonder from a barstool on a pier. The nights on the porch, feet hoisted to the railing, a lap filled with a drowsy child, or a dog, or a paper plate limp with shrimp shells and cocktail sauce. The conversations that went nowhere but meant everything.

There was that pesky summer cold, sure, a big toe sliced by an oyster shell, a week without the charger you forgot to pack. Mere nuisances compared to summer’s splendor, the luscious mouthful of a juicy peach swiped from a sun-warmed windowsill, the high, wide shade of a towering tree in full leaf, a bright riot of petunias and geraniums in a pot, the lazy current below your inner tube or canoe. A rumpled, over-washed seersucker suit for Sunday church, the huge June moon.

On this day commemorating labor and effort and industriousness, remember, finally, before evening falls and the cookout coals crumble to ash, the grand, lovely slowness that is summer. Its lengthy, languid, idle days, its endless sunshine on mountain peaks and glittering beaches and glassy lakes. Be glad, and worry not.