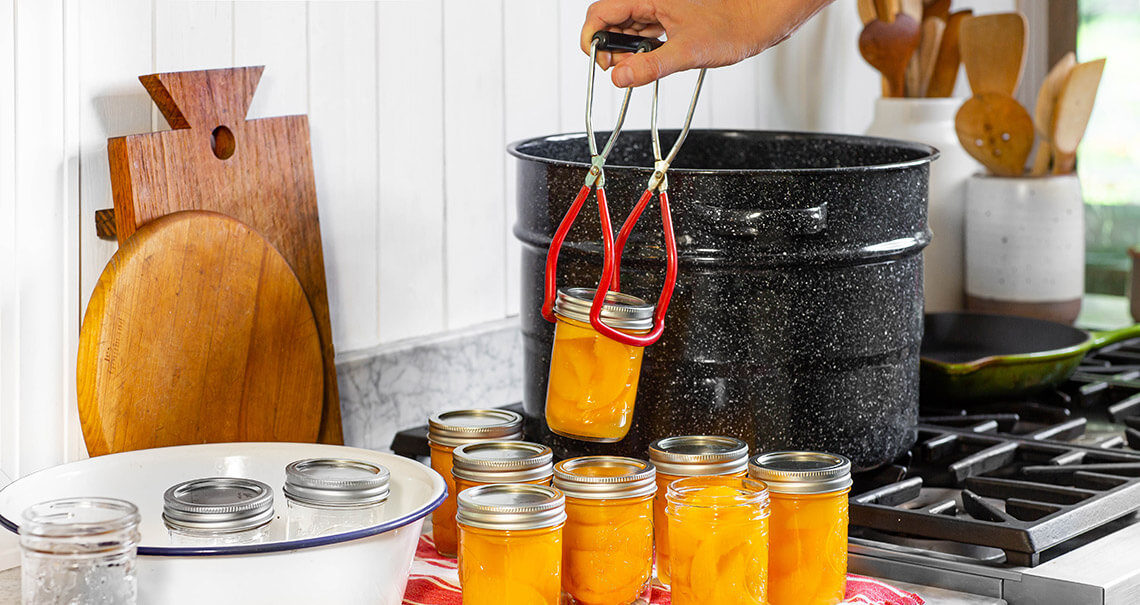 You can preserve the past and preserve a house; you can preserve your grandmother’s wedding dress, or a tress in a locket, or a four-leaf clover between the pages of a book. But I equate “preserving” with food. In a jar. In someone’s kitchen, not in a factory. (Credit where it’s due: Factories have gotten pretty darn good at preserving; there’s a store-bought hot okra pickle that I’d put up against those of anyone else who’s, um, putting up okra pickles.) What’s lost in those rows of grocery jars is the process of preservation itself, that all-hands-on-deck, daylong affair.

On jelly-making day, my sister and I were assigned the task of picking grapes from our vines, competing with vicious, territorial yellow jackets feasting inside the split skins. Indoors, the kitchen was hot, humid, and cloudy with steam from the water simmering in huge pots, the sterilizing jars rattling like a handful of marbles, and grapes boiling on another stove eye. I longed to be allowed to spoon off the viscous violet froth and knock it to the counter, where it gathered in folds and piles like purple lava — a Willy Wonka creation gone south. Hours later, my mother melted wax to seal the jars, and months later, at breakfast, my sister and I would compete again, this time with each other, over who got to press out the thick wax and reveal the dark purple literal fruit of our labors. 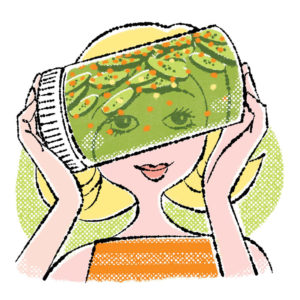 Stewed corn was even more labor-intensive and time-sensitive, since everyone knows that Silver Queen will quickly turn to starch in the fridge, so it must be picked and preserved in a single day. Shuck, silk. Then, a sharp knife had to be drawn down every single row of kernels, tiny as baby teeth, on every ear, to split them before scraping — no whole kernels permitted. Turn the knife to the flat edge and re-scrape, so the pale corn milk puddled on a plate. Butter, salt, double boiler. No sugar, no cream, and, heaven knows, no pepper, so the lemon-white concoction with a nearly indescribable texture — more solid than grits but runnier than a squash casserole — isn’t discolored with pepper specks. Then came the “From the Kitchen of …” labels, which I’d proudly ordered from the Miles Kimball catalog as a gift for my mother. Later, from the dark nighttime kitchen would come slight, hollow pock noises: the metal rounds of Mason jar lids sealing their rubber grip.

There were the fads and trends, of course. Dilly beans were up there with stewed corn in meticulousness. Before the availability of haricots verts, dilly beans meant picking or finding, one by one, a batch of skinny, immature string beans, prone to growing an inch in a day. Thick beans don’t pickle well, and if you miss “stringing” the bean before pickling, some future eater will need a toothpick. And since we’re talking cocktail preserves, here’s to the ’70s hot pepper jelly, mounded upon many a slab of cream cheese, and an easy intro for beginner preservers.

For her chowchow, my mother scoured antiques stores and junk shops in search of a crockery vat big enough to hold the relish makings. In my memory, the minced, stinky, fermenting contents sat on the counter for days on end before being ladled into jars. And clearer than any Fourth of July recollection is the summer afternoon when I ambled through my godmother’s house and passed the sink filled with floating baby cukes, on their way to becoming her famous bread-and-butter pickles. It was a delicacy so special that after she died, I couldn’t bear to open the last jar she’d given me, turning it over and over like a snow globe, watching the spices float dreamily among the slices.

As a child, you can’t appreciate preservation that doesn’t result in something sweet to spread on toast. The very appearance of pickled peaches — pale peeled balls in amber liquid, with spiky cloves clustered at the bottom — forestalled any taste test until one Thanksgiving in my 30s. Now, it’s Katie bar the door! when those golden globes appear. My mother and I barter annually over the tomato relish that one of her friends makes for Christmas presents. New Year’s black-eyed peas are just pointless without a healthy dollop.

Still, of all the preserved foods that I’ve savored, there’s one that I’ve never been able to rediscover or re-create. No doubt senses sharpen and memories exaggerate with time, but if there’s a taste and texture sensation equal to a particular past experience with a watermelon rind pickle, I haven’t found it. The rind was crunchy as a dill, but thicker, tougher, so the chew lasted longer. Yet the inside was tender as chess pie. It was, purely and simply, candy: a sweet, shiny, irregular chunk of edible emerald. If you have that recipe, you know, preserved somewhere, would you share?