The first time I saw the Map Shop, in 2002, I was cruising along South Kings Drive toward East Morehead Street in Charlotte. I’d just moved back to North Carolina from New York City and didn’t yet have my bearings. I was lost. Growing up in Asheboro, I drove to Charlotte many times, and the city always seemed strange and foreign, even harder to navigate than New York or Los Angeles. The layout of Charlotte’s streets makes no sense. You can be at the corner of Sharon Road and Sharon View Road, driving toward Sharon Amity Road — and wondering who in the world “Sharon” is. You can finish 18 holes at the Harry L. Jones Sr. Golf Course on Tyvola Road, drive over to the Foxcroft Wine shop on Fairview Road, pick up your kids at Providence Day School on Sardis Road, take them over to Rama Road Elementary on Rama Road, and then to Idlewild Elementary on Idlewild Road — and be on the same strip of pavement the entire 12 miles. One road, multiple names. One name, multiple roads. That’s Charlotte.

To get around the Queen City in the pre-GPS era, you needed a map. When I lived in New York, I always kept a subway map stuffed into my back pocket in case I got lost exploring Upper Manhattan or Coney Island in South Brooklyn. And during my time in Los Angeles in the early ’90s, my trusty Thomas Guide — the big, fat, ubiquitous spiral-bound set of maps of the entire L.A. region that sat, dog-eared, on the back seats of every car in the city — was my bible. So when I spotted The Map Shop perched above the intersection of Morehead and Kings, I took a hard left and swung into the parking lot. I needed a map of Charlotte, and I needed one pronto. 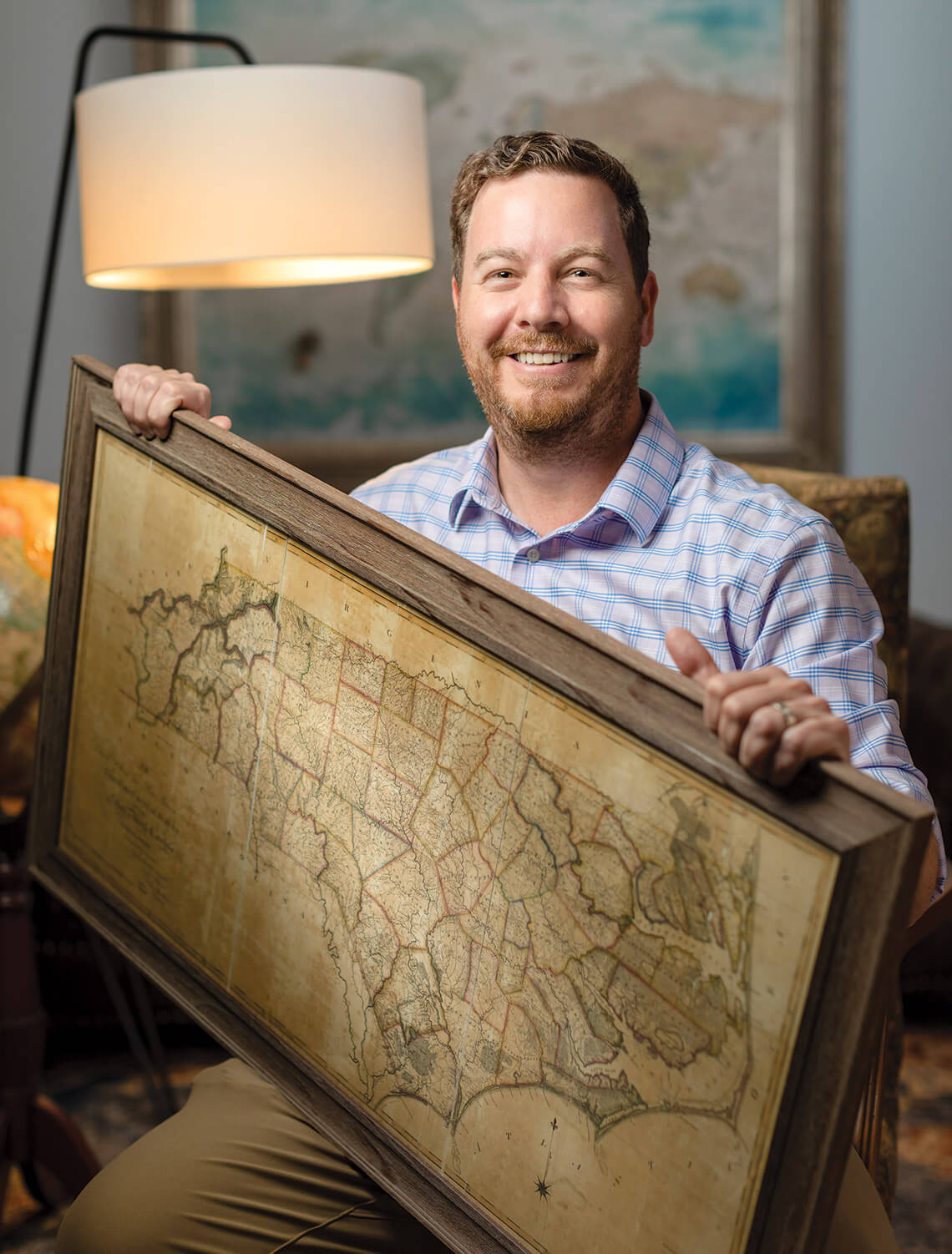 Mapmaker Tony Rodono and his wife, Katie, are the newest owners of The Map Shop. They moved the business to its current location. photograph by Jerry Wolford & Scott Muthersbaugh

Mention The Map Shop to anyone who lived in Charlotte between 2000 and 2020, and they’ll know exactly what you’re talking about. At some point, everybody’s passed by its navy blue awning, floor-to-ceiling windows, and big sign that shouted “The Map Shop” as though it were trumpeting the Second Coming. It was impossible to miss, even for those who never set foot inside. “Ah, yes, The Map Shop,” a coworker later said to me with a knowing smile when I brought it up in conversation. “I’ve always meant to stop and check it out.”

When I walked through The Map Shop’s doors, it was like I’d entered the Magic Kingdom. It was a playground of cartography: large and small globes in multiple colors; maps of the world in all different perspectives, from the standard Mercator projection (showing the typical shapes of land masses seen on most maps) to the Peters projection (which shows more accurate land mass sizes and proportions). There were maps of North Carolina and of the United States; classroom maps and custom-made maps, framed and laminated. There were nautical charts, hiking maps, sightseeing guides, travel books, and map-related gifts. And there were racks upon racks of road maps charting areas from Charlotte to the Central Alps. The place was packed with maps — about 7,000 of them.

Patrice Northrup was in her early 40s when she started working at The Map Shop in 1992. Back then, the store was located in a strip mall on South Boulevard and was a satellite of The Map Shop in Greenville, South Carolina. The job was perfect for Patrice, who had studied geography at Valparaiso University in Indiana. She and her husband, Ted, became fast friends with Steve and Janie Marlow, who owned the store. When the Marlows decided to sell the Charlotte location three years later, the Northrups jumped at the opportunity. Ted was finishing up his MBA at the University of North Carolina at Charlotte and had written a 30-page marketing case study on the business, showing that sales could be increased by a factor of five, maybe even 10. “So when we bought the business,” he remembers, “we said, Well, let’s just take that case study and work it.”

With Patrice’s background in geography and art and Ted’s business and tech acumen, the Northrups started doing their own cartography and in-house manufacturing of maps. They developed a website early on, in 1997, to market and sell their products to customers outside the Charlotte area. But the decision that would make The Map Shop iconic in Charlotte was based on something that every small-business owner knows is key: location, location, location. In 2000, the Northrups moved the shop into the prominent rectangular building at the corner of Morehead Street and Kings Drive. “It turned out to be a really great location for us,” Patrice says, with not a little bit of understatement.

One of the Northrups’ vendors, Tony Rodono, who sold artistic maps to The Map Shop, had a thriving online business in which he made custom maps of people’s college towns or favorite sports stadiums. When the Northrups decided to retire in 2016, Tony seemed a logical choice to carry the torch. “We really wanted The Map Shop to keep going, if possible, because there have been many, many map stores all over the country that have closed,” Patrice says. Besides, they really liked Tony and his wife, Katie. “Tony’s a real go-getter,” Ted says. “I mean, you meet Tony, and you can just see the energy level there.” If anybody could keep the place going, they thought, Tony was the guy.

In a quiet business park about a five-mile drive southwest of the spot where The Map Shop once stood as a beacon in Charlotte, Tony shows me around the store’s new location — a 5,000-square-foot space off Clanton Road in South End. He moved The Map Shop here in 2020, seeking extra room to make the three-dimensional maps that came with his acquisition of Hubbard Scientific, the largest manufacturer of raised-relief maps in the United States. The Map Shop’s playground-like showroom still exists at the front of the building, but it sits quiet today, with only muted chatter coming from a row of cubicles where cartographers and online salespeople sit. When Tony and Katie relocated the business, they fully intended to keep the store’s showroom open to folks who enjoy basking in the presence of 3D landscapes, who see beauty in the lines of a detailed road map and history in the shapes and typography on old globes. Then Covid hit, and the Rodonos closed The Map Shop’s doors to the public. “We moved in July and planned to reopen the showroom when we were able,” Tony says. “But then our e-commerce business really spiked during shutdowns, and we’ve had the fortunate problem of trying to keep up with online demand ever since.” 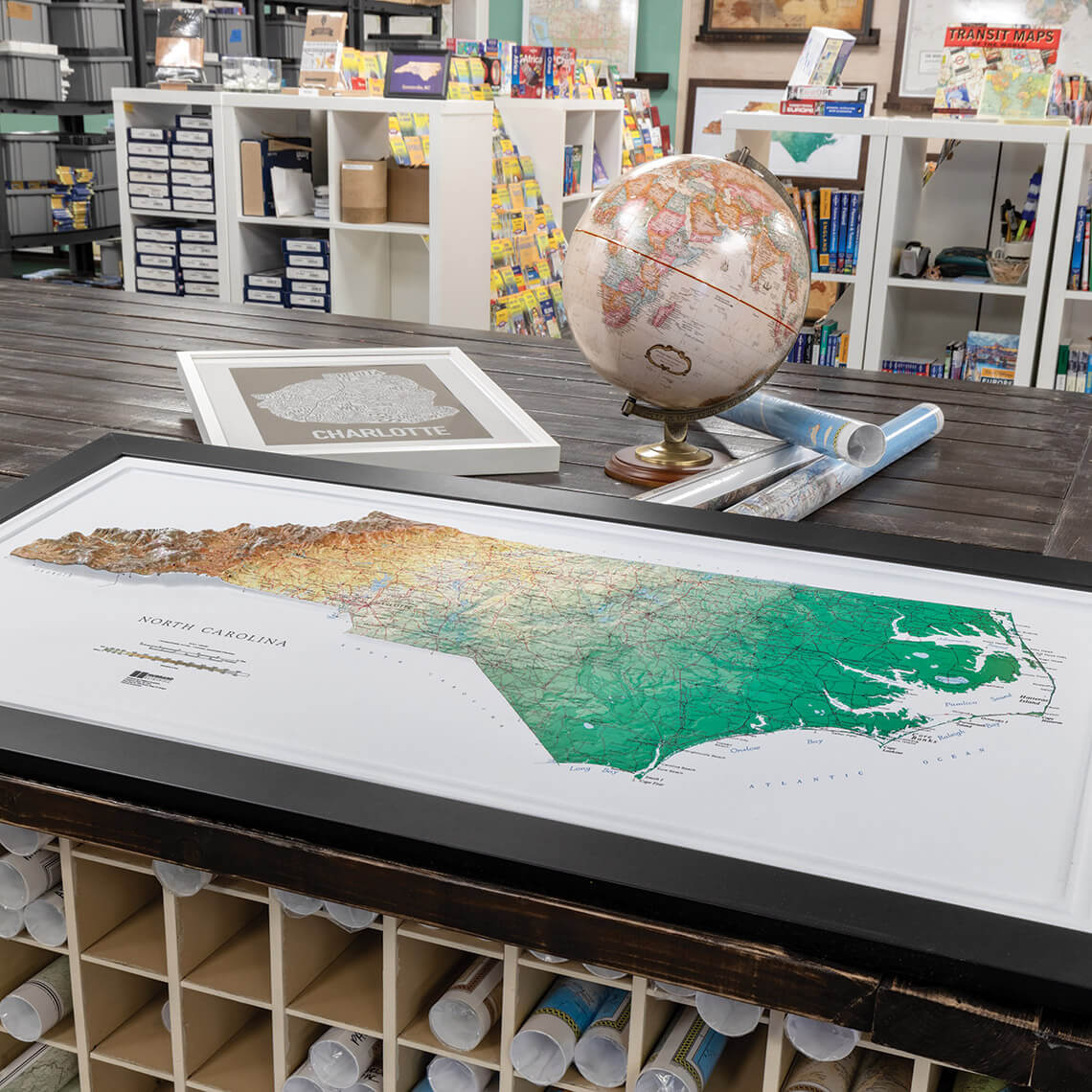 The latest iteration of The Map Shop still boasts maps of many kinds, including raised-relief maps. photograph by Jerry Wolford & Scott Muthersbaugh

He leads me to the back area, where Danny Seckel, one of the shop’s 12 employees, is hunched over a hot press, creating a raised-relief map from a Hubbard Scientific mold. “Danny’s really good at homing in on the science of making sure that this thing is the perfect temperature,” Tony says. “Not so hot that it expands beyond the terrain that’s underneath it.” Behind Tony are shelves and shelves of old raised-relief molds, including ones of the Great Smoky Mountains, the Blue Ridge Parkway, and places way far away from North Carolina. Tony runs his fingers across the ridges of one of the molds and becomes philosophical about why people gravitate to maps. “I think to really understand the story of a place, looking at a range of historical maps will, if not necessarily give you all the answers, at least lead you to ask the right questions.”

The fact that maps come with stories is one of the reasons why Tony believes that The Map Shop will always have a place in Charlotte — whether perched at a prominent intersection or not. People may look to their GPS apps to get from Asheville to Brevard or from Greenville to the Outer Banks, but to understand why those routes look much different today than they did a hundred years ago requires the study and appreciation of old maps. “One element that I really miss about the store being open is the stories,” Tony says. “You never knew at any given time who was going to walk in and have a story to tell. And everybody who walks in, they have a story — right off the bat, you know, probably similar to the story you had when you first walked in: I’m lost, and I don’t know how to get where I’m going.”

On that day back in 2002, when I first stepped into The Map Shop’s previous location, someone — I don’t remember who; it could have been Patrice, it could have been Ted, or it could have been one of their clerks — directed me to the spiral-bound Professional Drivers’ Street Atlas: Charlotte & Mecklenburg County. I kept it in the back seat of my VW Golf until I learned those chaotic streets by heart. I loved my Charlotte-area atlas. We went all over the place together, me stopping in parking lots to thumb to the page that would lead me to the McGill Rose Garden on the edge of downtown or to the Big Rock Nature Preserve way down near the South Carolina state line. Using it reminded me of those long trips from Asheboro to Kure Beach during my childhood, watching my mom awkwardly fold a North Carolina road map into smaller squares in order to zoom in on Rockingham or Lumberton to get her bearings. My Charlotte-area atlas showed my girlfriend and me how to get to the Five Points area next to Johnson C. Smith University in Historic West End, and up to the northeastern part of the city for events at UNC Charlotte. It showed me the way to my doctors’ appointments and to dinner parties with friends.

When I transitioned to GPS, life became easier, but it wasn’t necessarily better. I missed my old atlas of paper maps. GPS apps, with their computerized voices and demands that we must take the most practical route possible, are impersonal, inflexible, cold. They lack stories. Paper maps — the kind you open up in a big atlas or spread out on a picnic table or tack to your wall, like the North Carolina map that I have on the back of my cubicle at the office — are like friends. They work with us, not for us. They gently show us the way