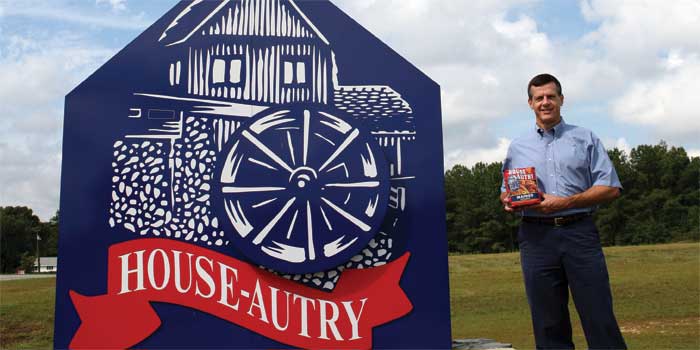 Inside House-Autry Mills, you expect to see a team of grandmothers on the assembly line, all of them rosy cheeked and pudgy, dressed in gingham aprons, armed with wooden spoons, and turning out enough hush puppy mix to fill a fleet of tractor-trailers.

In truth, House-Autry’s Johnston County home looks more like a research laboratory or a hospital on the inside: no butter-smeared cookware, no splotches anywhere, no grandmothers dipping a finger into the mix. Much of the plant is automated. Computers do a lot of the work.

But there’s nothing modern about the scent. After 200 years, House-Autry’s breader and mixer operation still smells like the peppery skin of a drumstick or the spice-rack aroma of a shrimp rub. Even with forklifts going past, workers in hard hats, you can’t help but think of dinner, except when you’re thinking about lunch.

“You get used to it,” says Tim Johns, House-Autry’s vice president of operations. “People tell you, ‘You smell like something good cooking.’ ”

House-Autry has made cornmeal in North Carolina since 1812, the era of James Madison and Francis Scott Key. The first batch came after the House family migrated from England and sent their grinding stones up the Cape Fear River by ferry then to Newton Grove via oxcart.

Inside the modern headquarters in Four Oaks, framed photographs tell how the original mill was made of longleaf pine, its wooden pegs carved by hand. This black-and-white scenery is a strategy that permeates the product: The dinner you eat today is the heirloom left by 200 years of Southern cooks, people who found a thousand ways to make pork and corn taste good.

Drive through Four Oaks, and home-cooked-food signs jump out at you like ambassadors for the town: Shirley’s Country Cooking, Kings — Home of Good Cooking, the Wellons Street strawberry stand.

In the grocery store aisles, House-Autry competes with more modern concoctions like Shake ’N Bake, a Kraft food bread-crumb brainchild that dates back a mere 47 years, built on the idea that frying is bad.

But you don’t Shake ’N Bake in an iron skillet, and you don’t work from a dog-eared recipe with a gravy stain slopped on the page, and you don’t enter the results in the State Fair. You don’t even brag on the outcome or pass it around to neighbors. You just talk about how much easier it was and how much time you saved.

“When you eat House-Autry food, it reminds you of growing up,” says Craig Hagood, the company president. “We don’t try to be fancy. We try to do comfort food.”

You could argue that cornmeal is cornmeal. But the difference with House-Autry, Hagood says, is that it’s Southern on purpose.

Fry a chicken with Quaker cornmeal, and it just doesn’t taste like something you eat in Johnston County. No offense to the white-haired, blue-hatted gentleman on the Quaker box, but he’s more of an oats guy. If you’re looking for a plate of crunchy, buttermilk-fried okra, you don’t look to a Pennsylvanian for advice.

‘The South is everywhere’

For all the modern machinery in the House-Autry plant, the centerpiece is still the grinding stones, 11 of them weighing about a ton apiece. Making cornmeal this way, smashing it with slow-moving, round stones, keeps more of the hull and germ of the kernel intact, giving the meal a courser texture and richer flavor.

The market for nostalgia food is nationwide, Hagood says, even in low-calorie, vegan-happy California. “You’d be surprised,” he says. “They eat a lot of fried chicken. The South is everywhere.”

Situated near interstates 95 and 40, House-Autry ships Southern cooking in any direction.

That variety shows that even though the taste for slow-cooked, cooked-with-love dishes remains, the company’s knack for keeping meat moist and breads rich goes beyond the 1812 palate.

Added spices are another important House-Autry modernization, says Lisa Prince, who organizes recipe contests for the State Fair. Back in the day, she explains, you added them all yourself. Now the packages come preseasoned, saving time that the House family’s 19th-century customers had to spare.

The spices are flavorful, but they’re not overwhelming. You don’t lose the shrimp in the breading. It still tastes like a fish — just given a little more instant oomph that your grandmother slathered on slowly.

“You’re still getting that quality,” Prince says. “It’s stone ground. But they’ve made it so it’s quicker for you. They’ve moved on with the times.”

The House-Autry cornmeal you eat today is prepared, at least partially, by robots. But they’re down-home robots, programmed with the knowledge of what makes a thigh juicy, what makes shrimp crackle.

For all the modern machinery, House-Autry still stocks its test kitchen with iron skillets and fills its spice room with sacks of garlic powder, hot Cajun spice, turmeric, chives, and thyme. Walking through it is like falling into an all-you-can-eat buffet, a place you line up for every Sunday.

“If we can get tried, we’ll get repeated,” Johns says confidently.

Any grandma worth her skillet would agree.