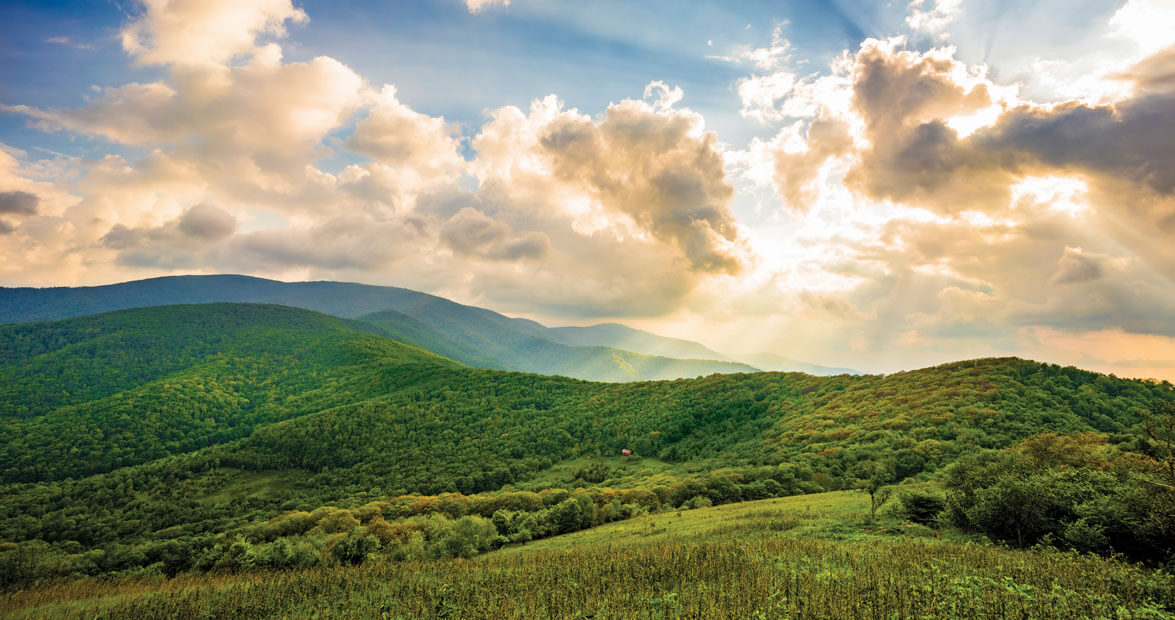 Just beyond the shadow of the Overmountain Shelter, at the edge of the Appalachian Trail, several Episcopalian pilgrims from Greensboro are reclining on their packs. It’s the sort of glorious morning that winds up on postcards — a sea of tulip poplar and black locust trees beneath a faultless blue sky — and these hikers are intent on enjoying every moment. They’ve walked St. Cuthbert’s Way in England and the Camino de Santiago in Spain, but they’ve come to this highland gap because, as one puts it, “a few days up here are as good as a few weeks of normal vacation.” They arrive wanting nothing less than “to find God,” and as they laugh and joke about the tame deer they encountered that morning — they named her Felicia — it appears they’ve found just what they were looking for.

If the Overmountain Shelter isn’t exactly the geographical heart of North Carolina’s Appalachian Mountains, it might well be the spiritual center. Long a place of confluence, the shelter — a red barn with a loft that can sleep 30 hikers — remains both a gathering point and a place of departure. A place where local turkey hunters in coveralls make conversation with bearded thru-hikers from Wisconsin; where ultrarunners in flimsy shorts encounter flocks of bird-watchers necklaced with expensive optics. All of it beneath a sky so open and vast you might be forgiven for imagining that you’re hiking in, say, Colorado, not western North Carolina.

The Barn is a backdrop for photos nearly as often as it’s a shelter for hikers.

The shelter sits in Avery County, on a notch of the Appalachian Trail, roughly halfway between Carvers Gap and Hump Mountain. “The Barn,” as hikers call it, was built in the early 1970s as a hay barn and became a hiking shelter a decade later. But the site’s significance extends all the way back to the American Revolution. Here, patriots traveling into the Carolinas to fight the British paused before marching down what is now the Overmountain Victory Trail, a crescent-shaped footpath that extends from Sycamore Shoals in east Tennessee down into South Carolina. When these rugged frontiersmen helped defeat the Loyalists at Kings Mountain, people wanted to know where they had come from. They reported, “From over the mountain,” and became known as — what else? — the “Overmountain Men.”

People are still coming from “over the mountain” — and above it and below it, too. The Episcopalian pilgrims shoulder their packs slowly, seemingly reluctant to leave. “Another seven miles,” one says, “and it’s back on the hamster wheel.” And with that, they start down the trail, but not before several take a last, almost wistful glance back at The Barn. 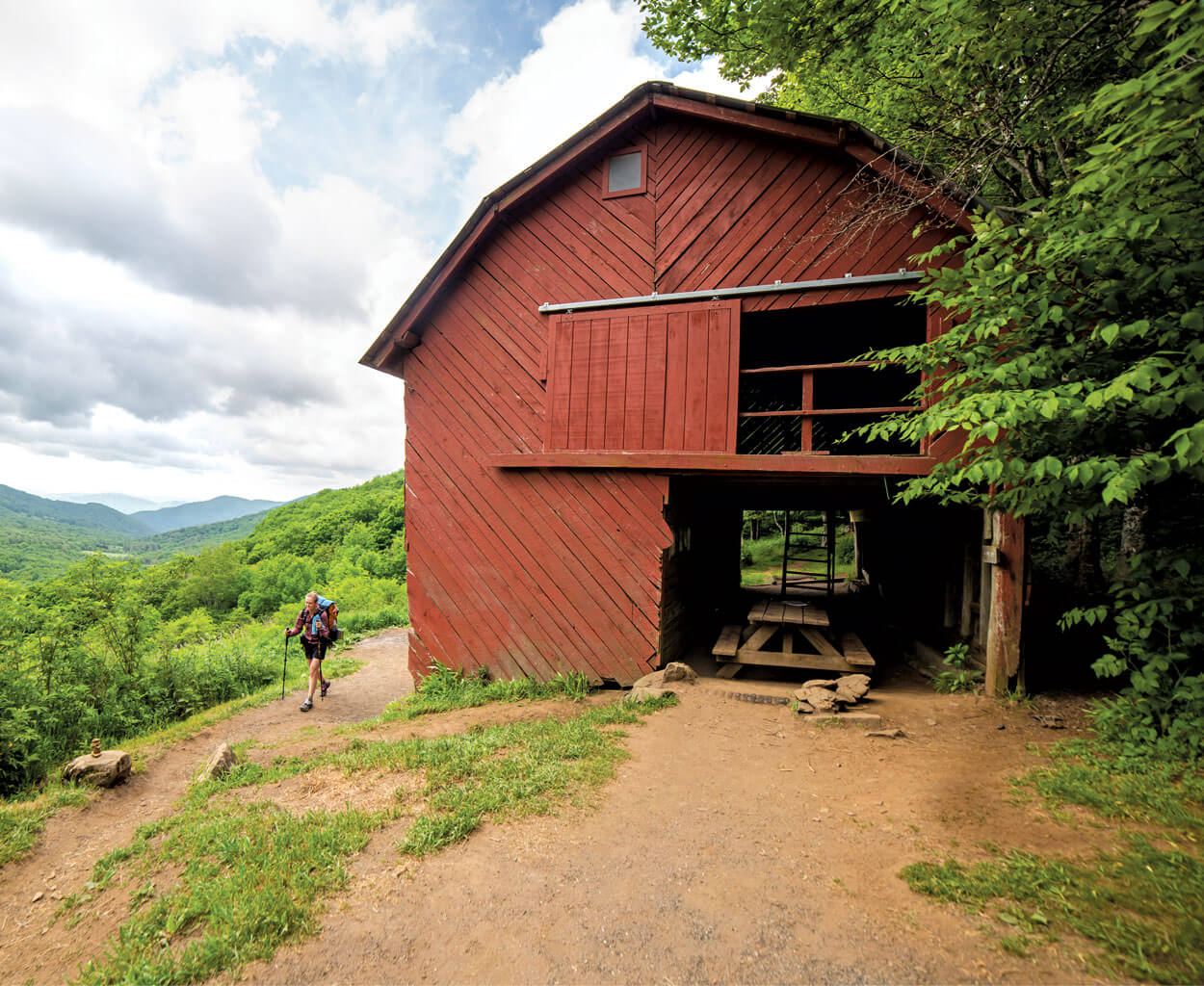 Among hikers and other visitors, the shelter is known as The Barn. It’s one of 250 shelters on the Appalachian Trail. photograph by Jack Sorokin

The Barn is one of more than 250 shelters that dot the Appalachian Trail from Georgia to Maine. The shelters provide hikers a place to rest, while reducing the environmental impact that individual tent sites would create. You could depart Springer Mountain and, 383 miles later, find the Overmountain Shelter down on your right, a red flicker through the fir and buckeyes. South from Mount Katahdin, it’s a shade more than 1,800 miles away. A shorter approach is to follow Roaring Creek Road, off U.S. Highway 19, to its gravelly terminus, park by a creek — yes, it’s roaring — and start up the mountain.

Along the way, you’ll encounter wild juxtapositions of wealth and beauty and struggle, all cheek-to-jowl. The winding road exposes clapboard farmhouses accessible by bridges decked with house siding; a trailer burned to its frame; sheets of ragged insulation flying like torn flags; and a graveyard of heavy machinery: scrapers and excavators, fire trucks and Mack trucks, a giant articulated dump truck, its bed raised skyward. Above it all rise palatial homes of shimmering glass and beams, colossal things that appear large even from a distance. If the contrast is not exactly beautiful, it is real. If it’s not exactly Chamber of Commerce-approved, it is authentic, and, believe it or not, it’s the perfect gateway to not only a place, but also a culture.

Appalachia is too often characterized as either a region of poverty and harsh realities — all moonshine and meth — or a place viewed through the kind of rose-colored lenses that refract grannies and biscuits, a Cracker Barrel gift shop come to life. To visit the Overmountain Shelter is to be dissuaded of either extreme. You are as likely to encounter someone from Avery County as someone from New England, to find field biologists from nearby Appalachian State University as families out for a day hike. The human diversity in this ancient place is rich, but not as rich as the flora and fauna. This is the most biodiverse region east of the Rockies, according to the Greater Appalachian Conservation Partnership. When it comes to forest diversity, only China is comparable.

Here, you can feel how deeply geologic time tangles with human time.

The land is lovely, often lushly so, but beneath the wildflowers and blueberry bushes is a craggy world of steep inclines and rocky outcroppings. The hike from the parking lot to the shelter is pure ascent, switchbacks that edge pastures and a creek before intersecting the AT. The land’s steady rise is colored a vibrant green. This path is the very one that the Overmountain Men marched in September 1780. Nearly 1,000 men made the difficult trek south, arriving in South Carolina, where British commander Major Patrick Ferguson waited with his 1,000 Loyalists perched on Kings Mountain west of Charlotte. That the Overmountain Men managed to take entrenched positions should come as no great surprise: These were flinty frontiersmen marshalled by tough leaders like John Sevier. A rival of Andrew Jackson, Sevier was a tavern keeper, a farmer, and a politician. But mostly, he was a fighter, and while his legacy is debated, his reputation for ferocity isn’t.

Geography demanded that the men cross here, at Yellow Mountain Gap, which is slung between the heights of Roan and Hump mountains. But their path feels symbolic, too: part of a deeper history of conflict. According to legend, the Catawba and Cherokee fought so fierce a battle atop the five-mile Roan Mountain ridge that the rhododendrons turned the red of spilled blood. Come June, the blooms are so vibrant that the area is as full of photographers as wanderers. That means The Barn is a backdrop for photos nearly as often as it’s a shelter for hikers.

Countless Instagram feeds show the beloved barn from all angles in all seasons, and the people, too, from all walks of life, who gather around this unassumingly beautiful place: the folks in sleeping bags and hammocks and tents, feet propped on tree stumps, fingers laced behind their heads in the universal pose of relaxation. It’s a magnetic site. You could pass by The Barn and not stop. But why would you do that? And if you stop, why not linger? 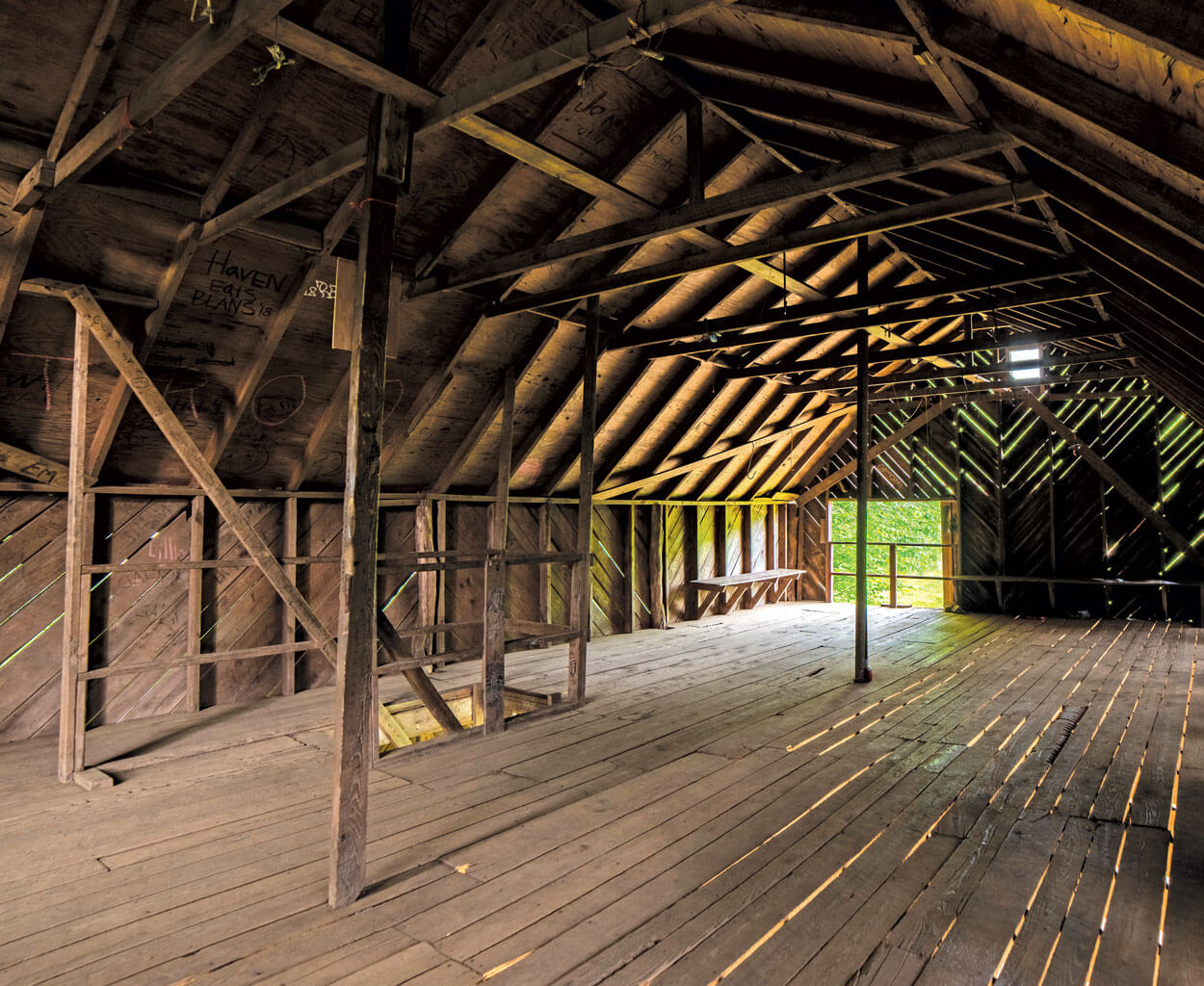 The barn’s loft can house up to 30 hikers for the night. While accommodations are rustic, the shelter does have one amenity: a privy. photograph by Jack Sorokin

Two thru-hikers who spent the night in the loft are now engaged in that endless task known to backpackers worldwide: packing and repacking gear. A moment later, a man and his young son come south down the trail just as an elderly couple emerges from the tree line, traveling north. The collective silence among them is awe as much as good manners. The Barn is a modest building — two stories of red planks and broad beams — humbled all the more by the grandeur of the mountains. Here, you can feel how deeply geologic time tangles with human time.

But there’s no need to say that, not when the sun is rising over the eastern valley, the needles of the spruce trees so bright they appear to glow, the breeze so soft that you wonder if you’re imagining it. The hikers shoulder their packs and turn toward Maine, but not before one last look at the Overmountain Shelter and the mountains that cradle it. “It’s good to know there’s still a place like this,” one says just as he’s leaving. It’s even better to know that with any luck, and with history on our side, there always will be.