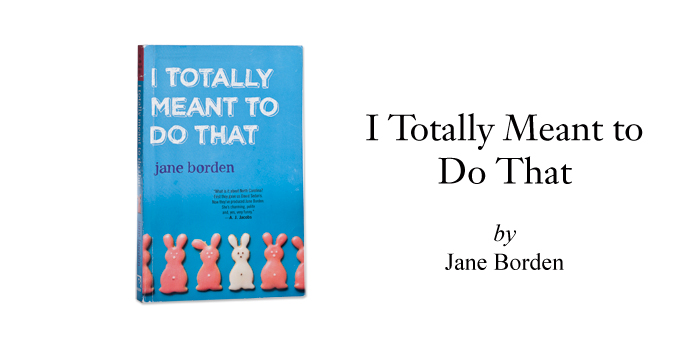 Jane Borden — bona fide Southerner, sorority sister, and debutante — graduates from the University of North Carolina at Chapel Hill and moves up to “northern territory,” aka New York City. The move in itself is not unusual. “Coveys of college grads recycle themselves in overpriced adapted two-bedrooms,” Borden explains. “We treat our time in New York like a rite of passage, a year spent in the woods.” But Borden ends up staying well beyond the expected year or two. She becomes, in effect, a New Yorker. I Totally Meant to Do That is a collection of hilarious essays documenting her transformation.

Yet it’s not a complete transformation — it can’t be. Yes, Borden is a New Yorker, but she remains a Southern girl from Greensboro. And the inherent conflict involved with embracing two different individualities infiltrates every one of her experiences. It’s your basic identity crisis, times a thousand. On traveling back to North Carolina for numerous weddings, she writes, “It’s as if each airplane is a passageway between two realms that are, to me, opposites, mirror images. And if that is the case, then every time I travel from one of my home/destinations to the other, the mirror image of me … must be traveling at the exact same time but in the opposite direction.”

As the years pass, the decision of where to permanently settle becomes increasingly pressing. Should she stay in New York City, living a life of freedom, excitement, and grunge, or return home to a life of beauty, family, and claustrophobia? As readers, we travel Borden’s journey with her, and when we put aside the book at last, it is with a feeling of pleasant exhaustion, as if we, too, have bounced like a Ping-Pong ball between two opposed worlds — and have somehow found common ground.