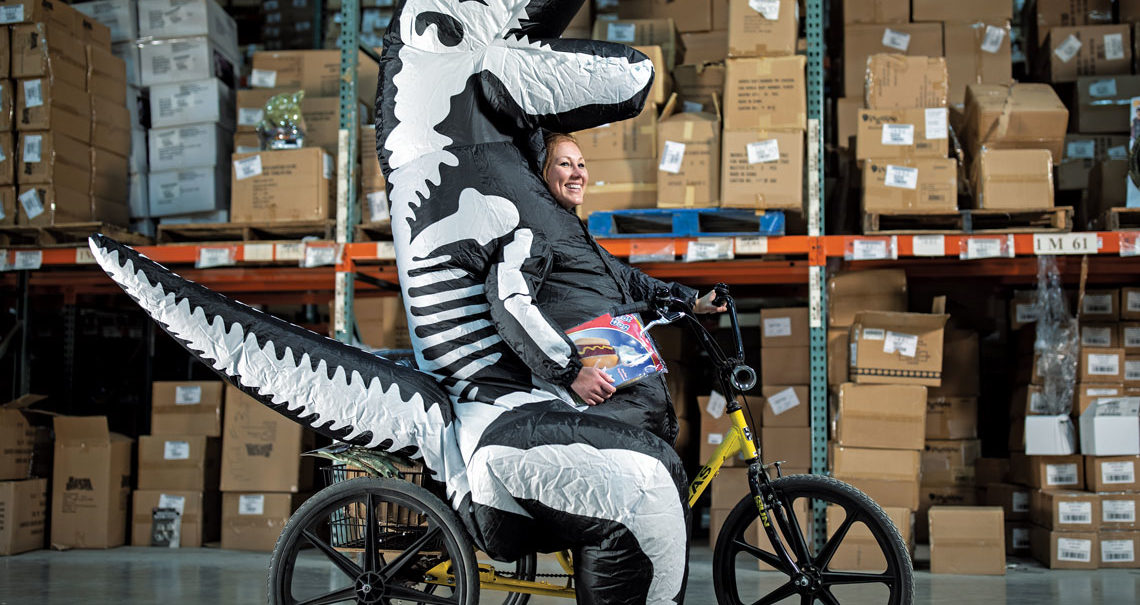 Watch this short film about the magic of Morris Costumes, and subscribe to the Our State YouTube channel for more great videos.

Amid a sea of subdivisions in Charlotte’s University City, a sprawling white building sits on 65 acres. There’s no fancy landscaping, no fountain or statues. The only signage is carved into a wooden bench sitting on the sidewalk. If it weren’t for the cars in the parking lot and the trucks at the loading dock, you’d deem the white building abandoned — maybe even haunted.

But venture inside, and you’ll discover workers fetching mermaids, cowboys, witches, superheroes, and more from shelves reaching 30 feet high. Turn one way, and there’s a cart of Santa hats. Turn another, and — boo! — there’s a seven-foot-tall mechanical dragon. What might seem like a Brigadoon of make-believe is the 300,000-square-foot distribution center for Morris Costumes, where up to 20,000 costumes ship out daily during the fall. 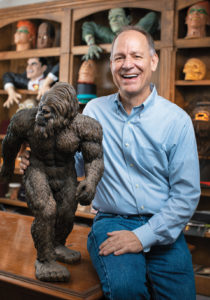 Scott Morris’s collection of Bigfoot memorabilia, inherited from his dad, is a reminder of the gorilla suit that helped make Morris Costumes famous. photograph by Jerry Wolford & Scott Muthersbaugh

Scott Morris and his sister, Terri Bate, run the company that their parents, Philip and Amy Morris, started 55 years ago — now the largest costume distributor in the world. Philip, who died in 2017, grew up in Kalamazoo, Michigan, near the fairgrounds, where the traveling showpeople dazzled him. When the circus was in town, he’d carry water to the animals for 25 cents a bucket just to be in the environment. By the time he was 8, he was performing magic tricks at the Elks Lodge.

High school sweethearts, Philip and Amy traveled around Canada, Mexico, and the United States performing in ghost shows and circuses. Philip was known as Dr. Evil on stage and TV — yes, the character in the Austin Powers movies was named after him — while Amy performed with him and handled costumes.

“At that time, I had started sewing for a lady who made dance costumes,” recalls Amy, now 84. “Her phone rang constantly. When I say constantly, I only worked part-time, and probably it would ring six times, asking if they rented costumes.”

In 1965, the Morrises were doing a show in Chicago when Amy happened to see an ad about a costume shop closing — and everything clicked. The couple purchased the shop’s inventory and began renting costumes from the basement of their Charlotte home on Kistler Avenue.

According to family lore, a couple of years later, a pair of filmmakers, Roger Patterson and Bob Gimlin, bought one of Philip’s custom gorilla suits and used it in a grainy clip depicting “Bigfoot” walking through the woods in Northern California. This legendary hoax catapulted Philip’s popularity, as well as that of Morris Costumes.

Today, the retail store resides in a 20,000-square-foot space on Monroe Road, just minutes from the Kistler Avenue basement. Amy works at the store five hours a day, seven days a week during the high season. “I love Halloween,” she says. “I love the excitement of the customers coming in and hopefully feeling like they got serviced properly and warmly.” Recently, she helped a couple find costumes for a bumblebee and a rose. “Nobody had ever, ever, ever put that combination together.”

Mermaid, cowboy, witch: Inside this Brigadoon of make-believe, you can be whatever you want to be.

In the Morrises’ store, you can be whatever you want to be, including a dancer, which is another chunk of the family’s business. Before the Halloween rush, dance students flurry in to be fitted for their shoes for the year and to peruse an entire wall of dance tights.

Up in University City, Scott and Terri oversee the distribution center. During the months leading up to Halloween, Scott’s wife, Denise, works there as well. Terri’s sons, Sean and Brandon Morris, work at the retail store and warehouse, respectively, and oversee the seasonal stores.

“It’s a family business, and everybody does everything,” Scott says — including cutting the grass. “I spend a lot of nights here during Halloween. I’ve got a little room over here that looks like a dorm room.”

Sitting in his office that’s peppered with a sumo wrestler costume, a Chewbacca outfit, and skeleton samples, Scott talks about his business philosophy. “A lot of owners, they don’t get dirty, and you would never see all of these boxes in their office,” he says. “That’s just become our heritage of how we’ve become successful and how we get employees.”

Terri agrees. “I think that unless you’re going to do a job yourself, it’s really hard to tell somebody else how to do the job or to understand what they’re doing or to help them,” she says. 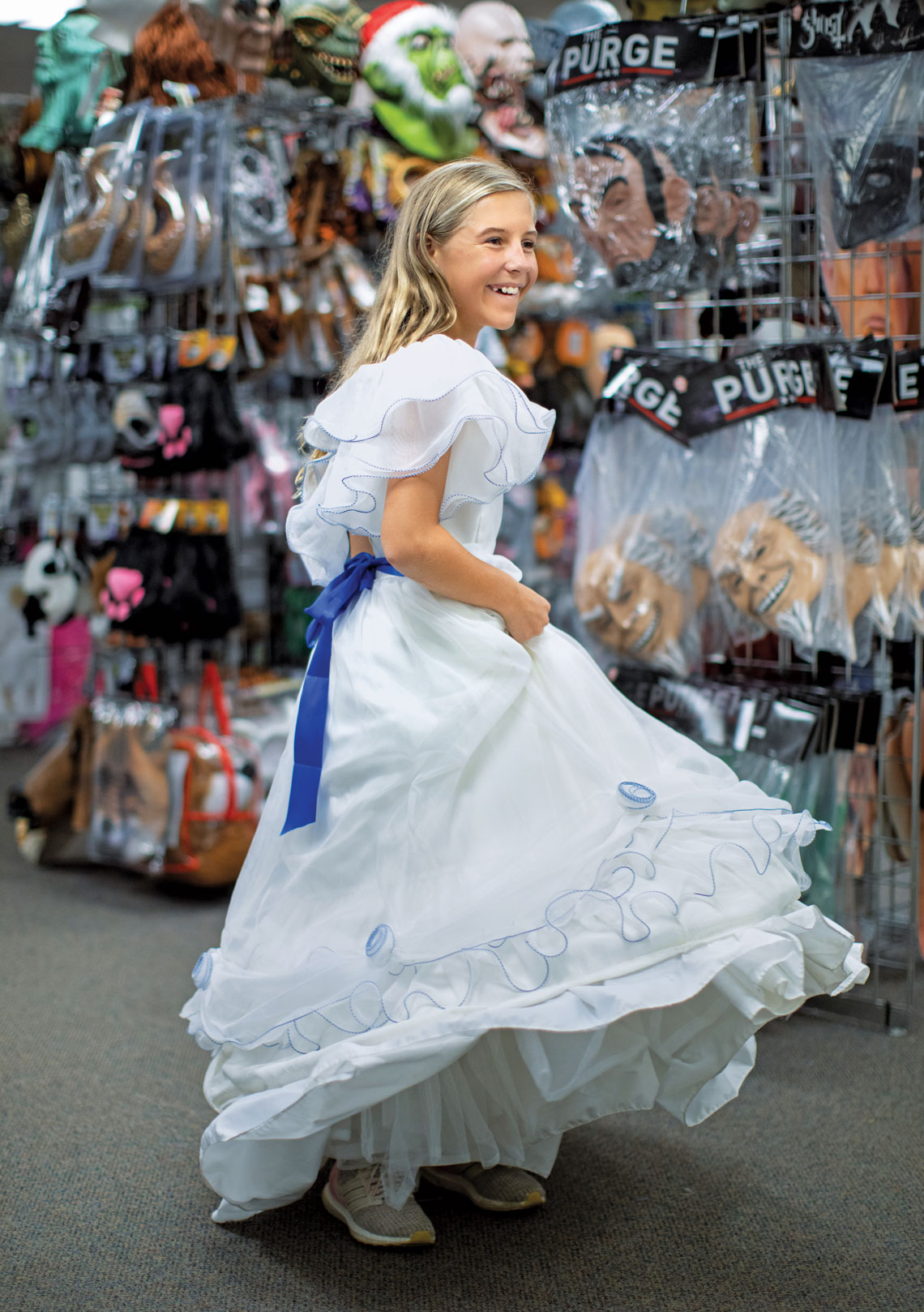 As children, Terri performed in her dad’s shows — a picture of her holding two tiger cubs at the circus hangs in the office — while Scott gravitated to sales. “I was always working the concession stand and doing the business side of it. That’s what I like, and that’s what has driven us to where we are today,” he says. The family now owns five temporary Halloween Express stores in the Charlotte area, serves as the franchisor of Halloween Express for approximately 150 stores across the country, and runs face-painting kiosks at Bank of America Stadium during Carolina Panthers games.

“We spend a lot of time thinking about where the market is going and trying to stay in front of it,” Scott says. “I look at it like a chess game from the standpoint of how do you move around pieces, just trying to win every day.”

As another truck drives away filled with costumes, it looks like the Morris family is winning while enjoying working together. When people call to see if they’re interested in selling, Scott goes back to his business philosophy. “You know as soon as I do sell, they’ll tell me I can’t cut the grass.”