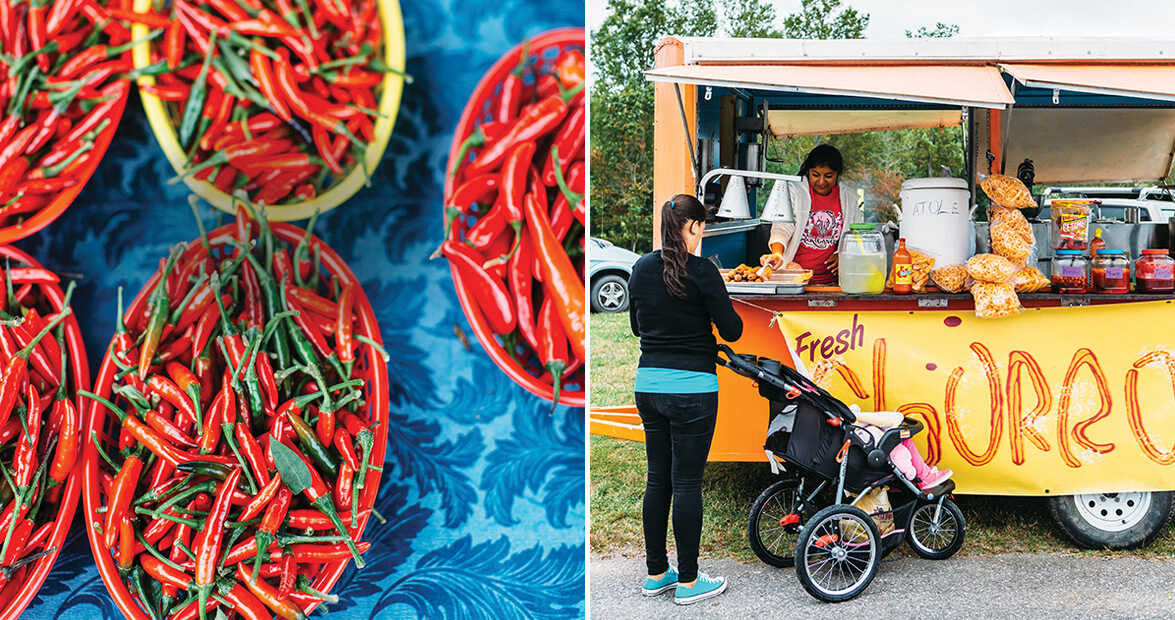 The early sun makes the empty midway sparkle, lighting up shuttered stands that, when open, sell funnel cakes and deep-fried Oreos. When the fair’s in operation, the Tri City Baptist Church and the Hildebran Lions Club dish out ham biscuits and pie slices here. This morning, however, I peel back the layers of foil and banana leaves on my still-warm tamale and pinch off a bite of soft masa.

Every Thursday morning, at the Hickory American Legion Fairgrounds in Newton, a sprawling flea market, full of fold-out tables and pop-up tents, takes over. That’s where Elizabeth Perez Ańoiue has sold homemade pork and chicken tamales for three years, along with Oaxaca queso fresco, Mexican crema, and, on this morning, fresh camarones (shrimp). Bulk-size bottles of Valentino hot sauce sit beside big bags of salty, crunchy chicharrones (or duros, as they are sometimes called). Originally from Mexico, Ańoiue now lives outside of Winston-Salem and drives the hour to Newton to set up her stand before dawn.

“People set up as early as 5 a.m. and stay according to how hot it is,” explains Bobby Winebarger, who, until recently, ran the fairgrounds and the flea market. At the beginning, 14 years ago, there were many more chickens and goats for sale. You can still find them today, among the entrepreneurs selling everything from wholesale produce to toiletries, antiques to DVDs. While the flea market has grown in size over the years, Winebarger remembers it always being diverse, and now, as we talk, the strains of bluegrass fiddle weave over new bachata by a band named Aventura.

That diversity comes, largely, due to the region’s roots in manufacturing. Nearby Morganton was founded in 1784 and served as a regional railway stop, aiding the growth of the local lumber and textile industries. At the turn of the 20th century, French Waldensians from Italy settled in the Morganton area and helped fill the demand for labor. Starting as early as the mid-1970s and continuing to today, Hmong refugees from Laos and indigenous Maya from Guatemala, among other immigrant groups, settled the region and found jobs with ease in nearby knitting mills, poultry processors, and machine parts factories. 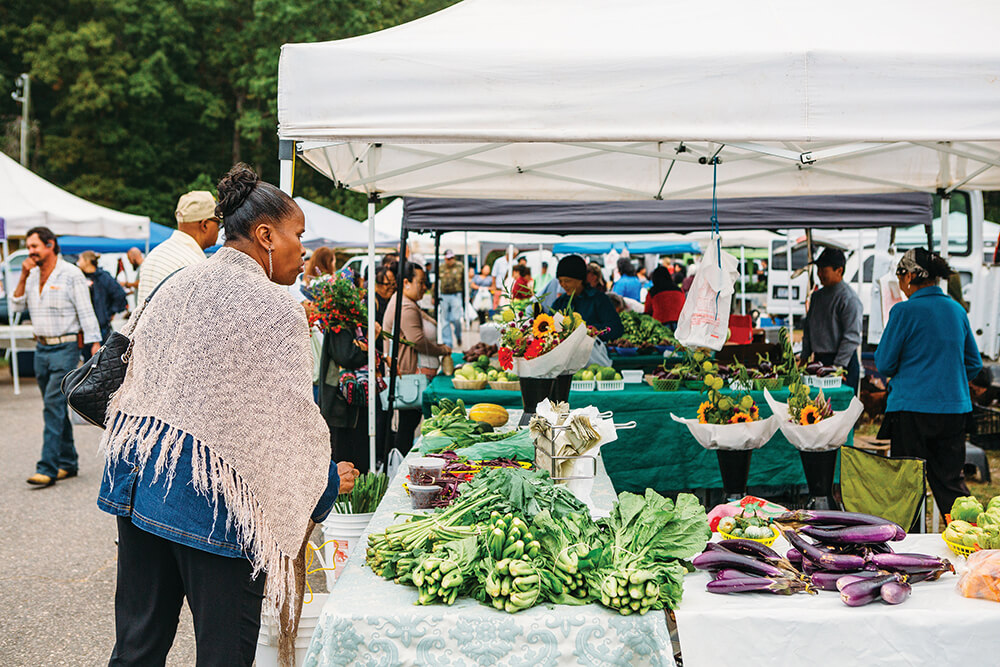 The Hickory American Legion Fair, now in its 104th year, runs for a week in September. On Thursdays during the rest of the year, the fairgrounds are awash in a patchwork of colorful tents and fresh produce. photograph by Tim Robison

Winter melons and chayote are spread beside round green-and- white-striped eggplants and bags stuffed with crimson chilies.

Those newcomers brought their food and farming traditions with them. Mai Vue, one of the many Hmong who sell at the Fairground Flea Market, comes each week from Lincoln County, where she runs a 10-acre farm with her husband. At her stand, winter melons and chayote are spread beside round green-and-white-striped eggplants and bags stuffed with crimson chilies. Vue explains that the smaller varieties are the spiciest, and then shows off half-gallon Ziploc bags packed tightly with golden-hued rice. This is sticky rice, grown on Vue’s land, and processed entirely by hand. Vue spent all day yesterday shaking and filtering the husks off the grains in preparation for the market. For the Hmong and others from Laos, a new crop of sticky rice is the sweetest of foods. At this morning market, Vue trades bags with other farmers to compare subtle variations in flavor and hulling skill.

Today, North Carolina is home to the fourth-largest Hmong population in the United States. In 1975, when the royalist government in Laos collapsed at the end of the Vietnam War, thousands of Hmong fled to this country as refugees. The first families to settle in the area arrived in Marion in 1976. Today, more than half of the state’s Hmong population lives in Caldwell, Catawba, Burke, and Alexander counties.

The mountains and soil of western North Carolina resemble the terrain of Laos and northern Thailand, and many Hmong began to farm in their new home. Services like the Cooperative Extension Program at North Carolina A&T State University and Rural Advancement Foundation International are helping them move from their traditional slash-and-burn farming techniques to something more sustainable.

As newer communities take root in North Carolina, public spaces like the fairgrounds are evolving. In November, Hmong Carolinas will host its New Year festival on the grounds for the fourth year in a row. But every Thursday, this flea market offers a portrait of the New South, with all of its wonderful, worldly flavors.