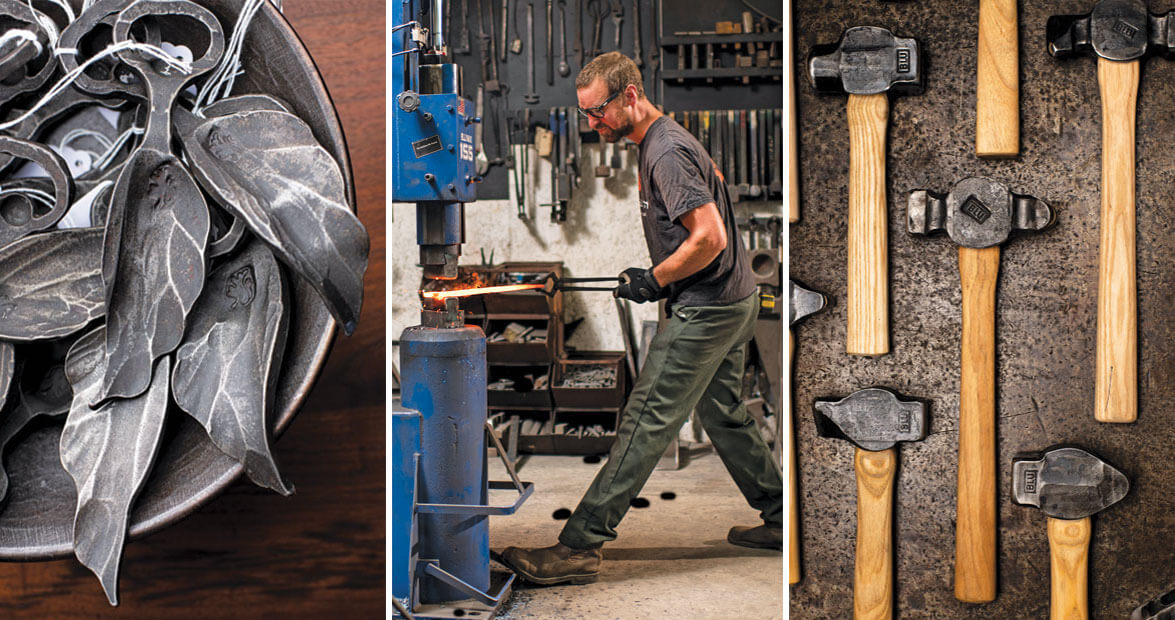 A bearded man in goggles and earplugs leans over a blacksmith’s forge and carefully slices a hole into a hunk of glowing, red-hot steel. Behind him, the rat-a-tat-tat of a pneumatic power hammer plays like percussion along with the whirring and buzzing and grinding of other machinery. This modern blacksmith is making hammers inside of Oak Hill Iron’s 6,750-square-foot shop in the rolling hills northwest of downtown Morganton. Dean Curfman, Oak Hill’s founder and co-owner, stands a few feet away, explaining what the blacksmith is doing: It’s a process called slitting and drifting, he says. “We start out with a block of steel, then we hot-punch a hole in it, drive drifts in it, and then shape the head.” He points to a fully made hammer: “That’s what we end up with.”

Hammers are hardly the only things that Oak Hill Iron ends up with. The company’s tool-making component, Big Blu Hammer Manufacturing, also makes tongs, chisels, anvils, and other instruments used by blacksmiths around the country. But what Oak Hill is perhaps most famous for, at least in North Carolina, is the extraordinary metal artwork you can find all across the state. In Morganton alone, Oak Hill’s footprints are everywhere. Walk into Fonta Flora Brewery on Union Street and order a cold craft beer: The forged iron tap handles that the bartenders pull were made at Oak Hill. Dean and his team made 12 of the benches that are scattered around downtown, the 13 iron sculptures that serve as dividers in the parking lot behind the Oak Hill Iron + Wood showroom on South King Street, and the iron gate at the entrance to an alleyway across from MAD Paperback Book Exchange.

Oak Hill has made highway markers for Wilkes and Caldwell counties, a 12-foot-tall wagon wheel for the town of Hickory, and a 30-foot-long train silhouette for Valdese’s Town Hall. And that’s not including all of the railing that Dean has made for private homes, or the fireplace screens that look almost Cubist, like something Picasso might have created if he’d been a blacksmith in the North Carolina foothills. “Everything he does is art — everything,” says Dean’s wife and business partner, Lynn, a designer who also oversees Oak Hill’s merchandising and showroom. 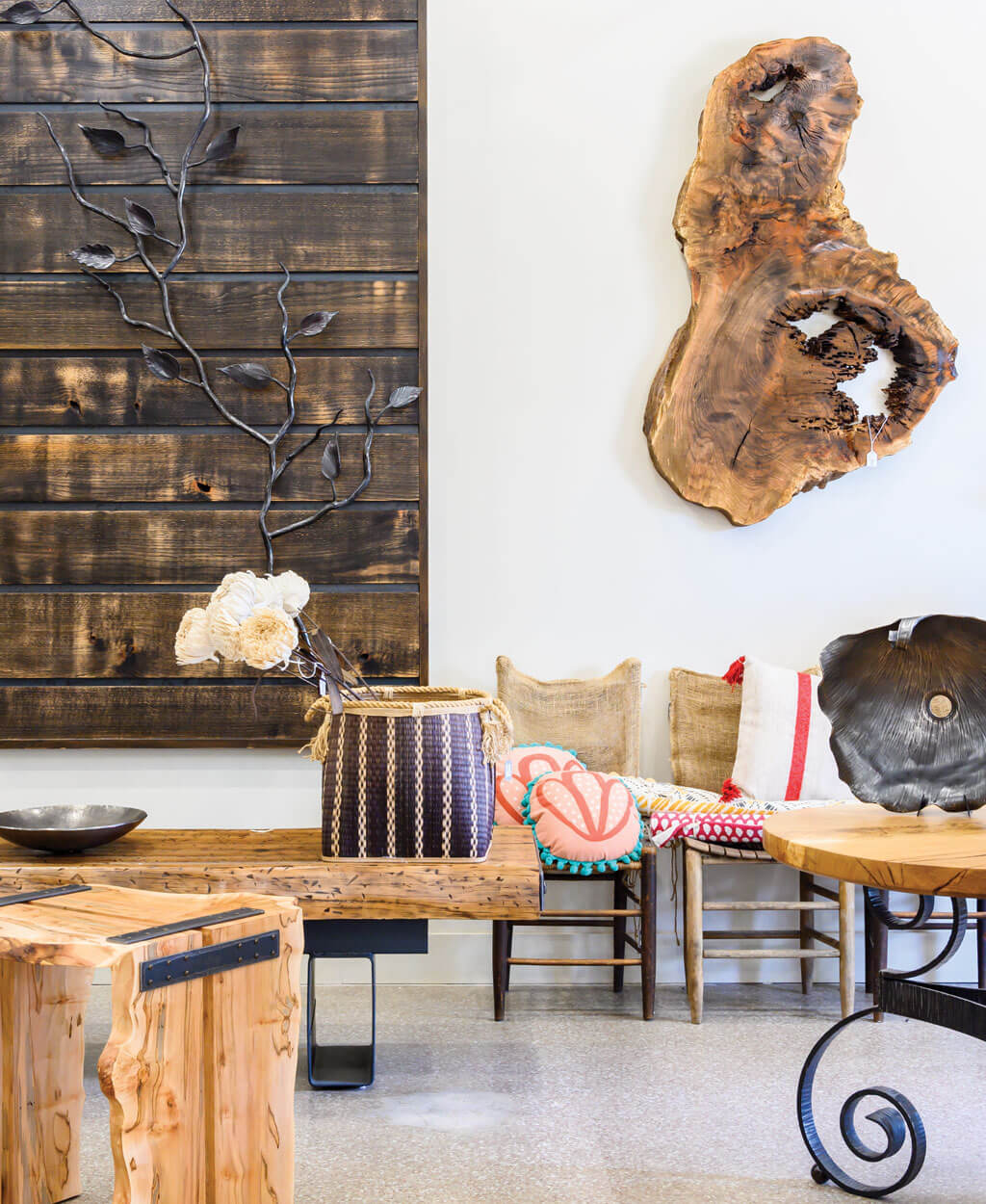 Dean has been making things — and making things to make things with — since he was a teenager. Born and raised on a Pennsylvania dairy farm, the 59-year-old metal artist began working in construction at 17 and had his own building supply center and construction company by his early 20s. He was drawn to blacksmithing when he realized that he could make tools himself for a lot less than if he bought them. By 1986, he’d grown tired of the cold Pennsylvania countryside and moved to the more moderate Morganton area, where he purchased a 140-year-old, two-story farmhouse on 25 acres of land. Ten years later, he opened Oak Hill Iron. Dean met Lynn while working on the same home renovation project in 2009. She’d spent the previous 20 years working in furniture merchandising. The pair began collaborating, and in 2011, they married.

Lynn brings her eye for design to Dean’s creations, and she played a role in Oak Hill’s expansion into woodworking in 2013. “We’d seen a bunch of trees that had come down, and the limbs had been sawed off for firewood, but the trunks were headed to the dump,” she says. At the time, natural-edge furniture designs — tabletops and other pieces that retain the shapes of the original wood — were growing in popularity, and the style fit well with Dean’s rustic metal art. “We thought, ‘What would happen if we started sawing wood here?’”

“I’ll draw something and ask her, ‘What does this look like?’ and she’ll give me an honest opinion.”

Back at the shop, Dean makes his way through the metalworking area and reaches a door at the back. It opens to reveal a massive pile of tree trunks and a shed stacked with slabs of lumber. He pans his tattooed arm from his sawmill building at the edge of a dusty gravel road to his woodshop and three kilns, one of which he built himself. “This is a solar kiln,” he says. “It’s low and slow, but the sun takes care of everything. It’s very energy-efficient.”

The energy at Oak Hill today is an equal balance of Dean’s and Lynn’s talents. In the decade since she joined the team — which includes 12 other blacksmiths, woodworkers, and office personnel — the line between art form and function has blended seamlessly. “When we go look at a job,” Dean says, “I’ll draw something and ask her, ‘What does this look like?’ and she’ll give me an honest opinion: ‘That looks awesome,’ or ‘That looks like crap.’ And if she says it looks like crap, she can tell me why. She knows what she’s talking about, because she went to school for it. I have it innately.” And that combination works well, whether Oak Hill is making hammers for other blacksmiths or beautifully detailed railing for a spiral staircase in a high-end condo.