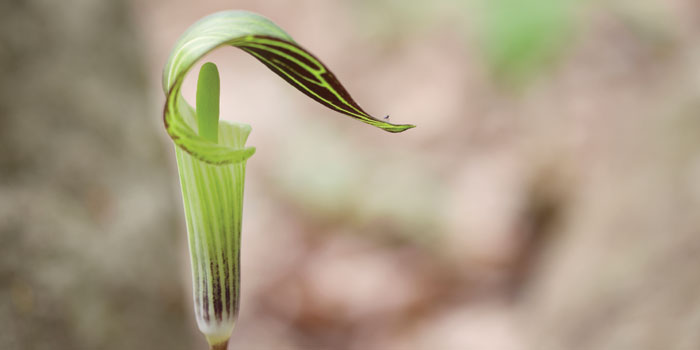 Jack-in-the-pulpit is hard to explain. For something so common — the native plant grows statewide — it’s pretty peculiar.

Its name describes its shape, most of the time. The spike sticking up in the center of the plant is a spadix. Someone, sometime, somewhere named it Jack. The tube surrounding the spadix is a spathe. Someone once thought it looked like a pulpit with a canopy overhead. So we now know this plant as the Rev. Jack preaching from his pulpit.

But if you go seeking the Rev. Jack in late summer, you won’t find him. That time of year, the plant’s name is irrelevant. The green spathe withers and falls away, revealing a cluster of bright red berries that looks like a handful of Red Hots candies.

As complicated as it looks, jack-in-the-pulpit, Arisaema triphyllum, is easy to grow. The plant prefers damp, moist soil, but it’s flexible. When Tom Harville, a native-plant enthusiast and former president of the N.C. Native Plant Society, began transforming his Cary yard into a natural woodland, jack-in-the-pulpit plants were one of his first choices.

“I put them in the worst place,” Harville says. “My yard is high and dry and red clay where they aren’t supposed to grow, but they’re doing well.”

Some of the plants are solid green, but others have white or dark purple stripes.

“It’s a deep, dark maroon,” Harville says of the purple-striped variety. “It has tiny sparkles in it. It almost looks like a custom car guy got ahold of it and painted it.”

Maybe someday, someone, somewhere will add to the story and give him a name, too.

The jack-in-the-pulpit root has its own story. Indians boiled the root and ate it as a vegetable. Boiling is essential to break down the calcium oxalate crystals contained inside. “If you try to eat it raw,” Harville says, “it feels like somebody put a whole wad of needles down your throat.”