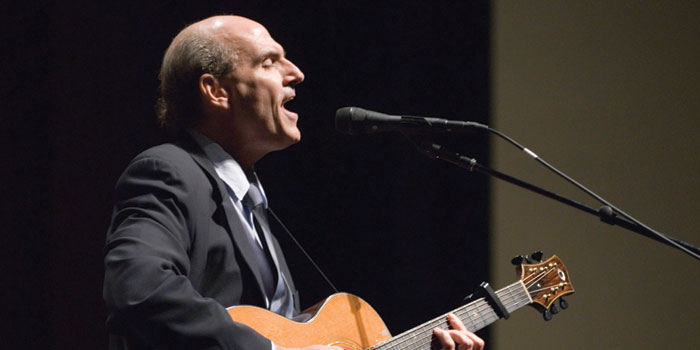 North Carolina’s official state song, the five-verse power-rouser “The Old North State,” was adopted as such by the General Assembly of 1927. I’m sure “The Old North State” is a fine song. I’ve perused the lyrics: They defend the state against defamers, celebrate the inner beauty of Carolina girls, and employ the word “Hurrah!” 20 times, all things I am proud to put my support behind. So I mean no disrespect when I say this, but I have never in my life heard “The Old North State.” James Taylor’s “Carolina in My Mind,” on the other hand, has snuck into my ears at least a thousand times. It has followed me across the country for years like some nostalgic albatross, appearing when least expected. On car radios. At weddings. In grocery stores. On television shows. The thing is everywhere. And it’s beautiful, memorable, and finely wrought; and wistful, sweet, and haunting; and even a little dark at times. Just like our state. And, if it were up to me, it would be our official state song. Because when I hear “Carolina in My Mind,” Carolina actually is in my mind.

North Carolina rightfully lays claim to Taylor as our own. At age 3, he moved here with his family from Boston, Massachusetts, settling in a Chapel Hill home up a wooded rise from Morgan Creek. His father worked at the University of North Carolina’s School of Medicine, serving for a time as its dean. As a teenager, Taylor moved north for a fragmented and somewhat disastrous stint in boarding school (read: mental breakdown), came home for a spell at Chapel Hill High, moved to New York City, picked up a nasty drug habit, then returned to North Carolina again in an effort to sober up. During these trying times, North Carolina remained for Taylor a geographic remedy.

For Taylor, landing a record deal of any sort at this point must have seemed earth-shattering, but when he moved to London in 1967 and did indeed sign a record deal, the event was perhaps singular in the changes it foretold: Taylor was the first American on the new label Apple Records, founded and run by a small band out of Liverpool called the Beatles. The Beatles. The most popular band in the world. And so Taylor soon found himself in London’s famed Trident studios, where his new label bosses were in the next room over recording The White Album.

Surrounded by what were surely some of his idols in the best studio in the world, did Taylor take this opportunity to write a song called “Carolina Will Never Be in My Mind Again Because I’m the Hottest Thing in the World?” No. In this first blush of success, Taylor’s mind turned away from the splendor of achievement and trained itself on home. In this almost shocking betrayal of youthful dreams come true, Taylor wrote “Carolina in My Mind” — an unadulterated batch of homesickness distilled into song.

The lyrics reflect the incongruity of it all: The song’s bridge — you know the one, with that oblique allusion to a “holy host of others” — is both a reference to John, Paul, George, and Ringo, those demigods of pop, and an acknowledgement that even they could not keep Taylor’s mind off home.

The whole idea is so audacious he even includes in the lyrics an apology.

I habitually get the song’s name wrong. I’m often tempted to call it “Carolina on My Mind.” But Carolina isn’t just on Taylor’s mind, it’s in it. And that small word — in — changes things. Because for those of us lucky enough to claim this humid pie slice of a state as our own, North Carolina isn’t just experienced by our senses — it actually becomes our senses. Conditioned by longleaf pines, pulled pork, Cheerwine, basketball, and hurricanes, our brains become so imbued by home that once we cross state lines, the rest of the world appears to us filtered through some unshakable and smoky North Carolina lens. Other places may appear beautiful, for sure, but it’s impossible for a North Carolinian to not, at some point, long for life to come back into focus through our permanent native spyglass. I guess this is how homesickness works for anyone from anywhere, but that’s only a guess. I can only vouch for North Carolina. So is it presumptive of me to say this is what a 19-year-old North Carolina songwriter was getting at when he found himself in England, missing his father, his dog Hercules, and his pumpkin collection back in Chapel Hill? Heck no. It didn’t matter that James Taylor was hanging out with The Beatles. The bigger issue was that he wasn’t in North Carolina.

“Chapel Hill, the Piedmont, the outlying hills, were tranquil, rural, beautiful, but quiet,” he told Timothy White in the 2001 biography Long Ago and Far Away. “Thinking of the red soil, the seasons, the way things smelled down there, I feel as though my experience of coming of age there was more a matter of landscape and climate than people.”

See? You can hear Taylor edging around that idea that Carolina isn’t just on his mind. The place is in his mind. James Taylor’s neurons might as well have been made of red clay.

Say what you will about James Taylor (not that there’s much to say — he has avoided the tabloids successfully for close to three decades, a sign of true celebrity sanity if you ask me), but he’s almost impossible to dislike. Maybe you’ve heard him too many times, maybe he’s just too palatable for a certain sensibility, but most complaints formed about Taylor seem essentially based on the fact that he is such consistent musical balm. That midrange nasal drawl is somehow also rich and soothing. It’s like honey. And maybe you don’t like honey, I get it, but if you think you don’t like Taylor, or more specifically “Carolina in My Mind,” I challenge you to really listen to it.

Start with the original version, the first single off Taylor’s 1968 debut. There’s no getting around it — it sounds like The Beatles, and there’s good reason why. That bass line, so sinewy and melodic, sounds just like Paul McCartney because it actually is Paul McCartney. The backing vocal — high, thin, and winsome — sounds just like George Harrison because it is George Harrison. The track is cool, even edgy (neither an adjective often attached to Taylor), though perhaps a bit overproduced. But these days, Taylor’s original version is probably heard less often than even “The Old North State.” The song basically flopped as a single, and then, because of reproduction rights, it ended up being rerecorded for his 1976 Greatest Hits.

It is this second version, not the original, that is so ubiquitous. This is the one we know and love. And why, you may ask, why is the version without Beatles more popular? That’s easy: The version with Beatles was about Beatles. The second version has an arrangement that never makes you think, “Hey, that’s Paul!” or “That’s so George!” It just recedes behind Taylor’s voice — it frames him, it supports him. This second version isn’t about the event of the recording, it’s just about the song. And the song is enough.

Every state has a song. Ray Charles gave Georgia “Georgia on my Mind” (just on, not in). John Denver penned “Colorado Rocky Mountain High.” Even South Dakota was immortalized by the Bee Gees in the stinker “South Dakota Morning.” North Carolina has its pick. General Johnson & the Chairmen of the Board gifted us the classic “Carolina Girls,” and remember that rap song a few years back urging North Carolina to take its shirt off and swing it around our head like a helicopter? The list goes on, but for whatever reason, “Carolina in My Mind” has become more than just part of our Carolina sound track. Call me a dissident, call me an outlaw if you must, but I am going to hereby declare, even if 1927’s General Assembly says otherwise, that “Carolina in My Mind” is actually this state’s song.

When was the last time you heard it? At a graduation ceremony? During a wedding reception? Find any fresh-faced a cappella group on a Carolina campus, and you’re bound to get a rendition. Is it a love song? Surely. Is it sappy? Perhaps. But so can be love, I suppose, and just tell me who doesn’t love love.

You know the song. Go ahead and conjure the melody. Can’t you see the sunshine? I bet you didn’t even have to look. It’s a magic trick invented by James Taylor and encoded into song. And trust me, you don’t even have to tell me what you’re thinking about now because I already know: signs that might be omens say you’re going, you’re going.

Nic Brown is the author of the novels Doubles and Floodmarkers. His writing has appeared in the Harvard Review, Garden & Gun, and The New York Times, among many other publications. Find his archived stories here.