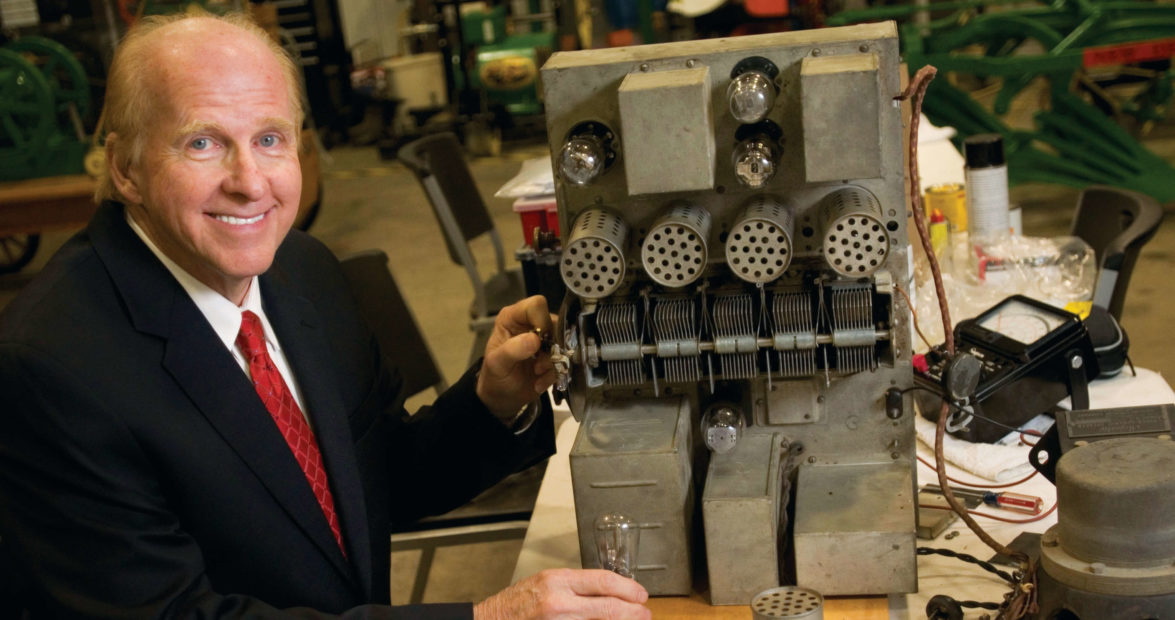 EDITOR’S NOTE: This story originally appeared in the April 2010 issue.

Jerry Neal is a tinkerer, by temperament and by trade. When he was a boy, he read all he could about inventors such as Alexander Graham Bell, Guglielmo Marconi, and Thomas Alva Edison, and then carried out his own electronics experiments based on their pioneering works.

He was still in elementary school, in the Randolph County town of Archdale, when he built his first simple telephone using a speaker salvaged from an old radio, a block of wood, a coffee can, and carbon dust ground from discarded battery cores. A later, more sophisticated model featured a metal Band-Aid box, razor blade, and length of lead whittled from a pencil.

When he was 11, Neal figured out how to broadcast a signal through the Randolph County countryside near Trinity, where his family had moved. To anyone else who happened to “tune in,” the sound would have been an annoying buzz. To Neal, it was magic. He tinkered with this rudimentary setup until he was able to fill the airwaves (if only for a few rural miles) with the music of his favorite singers, 45-rpm records spinning on a portable record player. Eventually, he hooked up a microphone, too, so his little radio station could have a D.J., but he rarely said much. He was shy in those days.

Neal came by his high-tech passion honestly. Years earlier, his father, Albert, who was superintendent of a furniture factory in High Point, had worked his way through a correspondence course in radio repair. Jerry was seven or eight when he discovered his dad’s textbooks in the attic. He immersed himself in those technical studies the way other boys got lost in the world of comics.

His mother, Bertie, did not understand. She told her friends, “My son messes with wire.”

His dad, of course, understood. He watched patiently — and answered questions whenever Jerry encountered snags — as his son’s experimentation left a path strewn with electronic pieces and parts.

“His dad told me one time [Jerry] would always tear every single radio apart,” says Linda Neal, Jerry’s wife of 30 years. “He would come in, and it would be in pieces, and he’d say, ‘Boy, are you ever going to learn to put that back together?’ And he did.”

After high school, Neal studied electronics, earning an associate’s degree in engineering from Gaston Technical Institute in Gastonia. He worked for several companies — and even launched an ill-fated enterprise to sell soil moisture sensors and control systems he had designed — before he and two partners founded a company in 1991 called RF Micro Devices (RFMD). That company marketed, designed, and manufactured powerful little radio frequency microchips that paved the way for bulky mobile phones of the time to be made small enough to slip into a pocket.

The partners, Bill Pratt and Powell Seymour, were former coworkers of Neal’s. They recruited him to find money for the startup and to handle marketing. Within a year, the company’s workforce had expanded to 10. Within a decade, RFMD was seeing a billion dollars in annual sales. Today there are 4,000 employees in 27 locations, including 1,700 at corporate headquarters and fabrication facilities in Greensboro, and the company makes and sells a range of semiconductor components used in many fields, including components for a million cell phones a day — almost half of those produced in the world.

As RFMD’s executive vice president of marketing and strategic development, Neal makes a lot of presentations, at home and abroad. Ringing cell phones irritate most speakers, but he savors the sound. Other sounds that are sweet music to Neal’s ears: a dropped cell phone crashing onto the floor, or, better still, splashing into a toilet bowl or a water-filled tub.

“You think maybe that’s another sale,” he says with a grin.

Neal says he has eight or nine cell phones, maybe 10, but uses only one or two of them on a daily basis. While his company’s success depends in part upon the proliferation of cell phones, he acknowledges that there is a downside. For one thing, he says it’s virtually impossible for him to take a real, get-away-from-it-all vacation because he is always linked by wireless technology to everyone who has his number or his email address.

RFMD’s remarkable success enabled Jerry and Linda to build a “house with a larger purpose,” one of the largest private homes in the southeastern United States. The 32,000-square-foot house stands on a hill in northwestern Randolph County. Its Early Classical Revival design includes fluted columns 32 feet tall and four feet in diameter; a central rotunda 60 feet above the floor of the entrance hall; and a cupola at the summit, which, on a clear day, offers views of places 30 miles away.

Jerry and Linda Neal do not live in Linbrook Hall. They’ve spent only eight nights there since it was built. They say they may live there some day, but, for now, they are happy and comfortable in a restored rock home nearby.

Jerry named the house Linbrook Hall, for his wife. Indeed, Jerry and Linda have come a long way from their younger days. Linda only agreed to go out with Jerry because his mother asked her if she would. Linda did not think much of blind dates, but she had worked for Neal’s father at the High Point furniture factory and thought the world of him. She had come to know Jerry’s mother well and loved her, too.

So, she accepted a sight-unseen invitation to have dinner with their son, who picked her up in an old car with a hole rusted through the floorboard. Eventually, he won her heart, worn-out wheels and all. They’ve been married 30 years.

Jerry credits Linda with giving heart and soul to Linbrook Hall, an otherwise massive structure of concrete, brick, and steel. She orchestrated the interior design, choosing the vibrant colors and accumulating most of the furniture, an eclectic mix of antique and contemporary pieces. She also is responsible for inspiring Linbrook Hall’s reason for being, he says.

The house was conceived with the idea of using it as a place where people could gather for special events, a venue where visitors might be inspired to open their pocketbooks and wallets in support of special causes.

“We talked about it being a ‘giving factory,’” Jerry says.

Even “giving factories” require technical expertise and upkeep. Neal oversees all things technical, great and small, at Linbrook Hall. About once a month, he trundles a cart loaded with lightbulbs of every shape and size through the mansion, replacing burned out bulbs.

“You really don’t have to think when you’re changing a lightbulb,” he says. “You can really let your mind rest, I suppose.”

Another routine task he sometimes undertakes (he enjoys the exercise) is loading wood into a boiler that heats water that circulates in pipes throughout the house. The water heats the air in the house. It takes about a ton of wood a day to keep Linbrook Hall toasty.

“There has not been a time in my life when I did not have a radio project going on,” he says. “I probably have 15 or 20 radio projects going on right now. My fascination right now is the restoration of 1920s radio equipment, so I’ve been buying up, really, you might call it junk, and trying to put it back in its original condition.”

Neal says he’s encountered some difficulty with the old Majestic radio at the tractor museum. He took it apart and replaced what needed replacing. The Internet, he says, makes tracking down these kinds of things so much easier than in days gone by. Still, the radio remains silent.

“I couldn’t find anything wrong with it other than it doesn’t work,” he says.

Linda says she’s pretty sure her husband will figure it out.

“He’s probably the hardest-working person I know,” she says, noting that he often stays up until midnight, and sometimes until two or three in the morning, working on one of his projects, but is always up at dawn to head to work. “He is really dedicated. If something he’s working on breaks, or is not working out, he will not give up. He will never give up.“