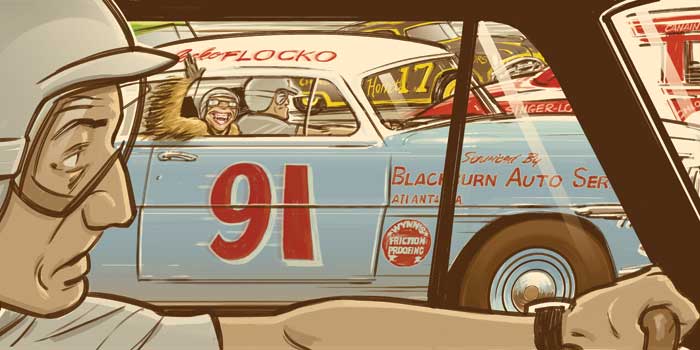 Sixty years ago this month, a man, a machine and a monkey made history. It’s comical, surreal, scarcely believable history, to be sure — but it’s history nonetheless.

Even in the vast lore of NASCAR, a sport known for its boisterous bootleggers and daredevil drivers, the true tale of Jocko Flocko, the only monkey ever to win a stock-car race, laps the field and beats them all.

And it happened on a half-mile dirt track in Hickory.

The year was 1953, and hotshot driver Tim Flock was coming off a dominant 1952 season; he won eight of the 33 races he entered en route to the Grand National points championship. But Tim’s wins sputtered as the new season began, and his sponsor, Ted Chester, was looking for a way to shake things up.

He found his answer in an Atlanta pet shop.

One day in late March or early April, Chester visited the pet shop to buy a puppy for a family member’s birthday. While there, he couldn’t take his eyes off a rhesus monkey whose name, according to a sign on the monkey’s cage, was Jocko. The marketing machine in Chester’s brain kicked into high gear, and he envisioned the monkey — Jocko Flocko had a nice ring to it, he thought — riding shotgun with Tim in his ’53 Hudson Hornet. If nothing else, he figured Jocko would be a great gimmick for keeping his young driver in the spotlight, whether he was winning races or not.

Chester bought Jocko and headed to the race team’s garage, where Tim and his crew were tinkering with the Hudson. When they saw the monkey and learned of Chester’s plan to put him in the race car with Tim, they thought their owner had gone, well, bananas.

“I thought Ted had been hittin’ the jug too much — he couldn’t be serious,” Tim said in Tim Flock, Race Driver, a biography published in 1991. “But the more I got to thinking about it, the more I liked it. Jocko Flocko could race with me anytime — if he proved he could handle the Grand National Circuit.”

Tim died in 1998, but his widow, Frances Flock, heard her husband tell the story of Jocko Flocko countless times.

“I’ve got it memorized by now,” the 84-year-old woman says with a chuckle, speaking by phone from her home in Indian Land, South Carolina.

One thing she remembers is that from the beginning, Tim had his doubts about Jocko riding shotgun.

“He said Ted came into the garage with this little monkey,” she recalls, “and Ted said, ‘I have an idea. I thought we could build a seat for him, get him a little helmet and his own uniform, and we could put him in the racecar with you. We need to do something to get some attention for you.’ ”

Frances says Tim hemmed and hawed until he finally said, “You’re the boss, but I think you’re crazy. NASCAR’s not gonna let us race with that monkey.”

“NASCAR,” Chester replied, “is not gonna know about it.”

Sure enough, nobody told NASCAR officials. Meanwhile, preparations began for Jocko’s inaugural ride: A special seat was installed on the passenger’s side of the racecar, high enough that Jocko would be able to look out the window and wave to spectators or to other drivers as Tim blew by them. Jocko had his own helmet, goggles, and racing suit, with the car number (91) stitched on the back. Then, on April 5, 1953, on the dirt track of the old Charlotte Speedway, Jocko became the first monkey to compete in a stock-car race. With Tim starting the 150-lap race on the pole, his crew smuggled Jocko into the Hudson and buckled him into his seat just before the race began.

Frances laughs as she thinks about the surprise that lay in store for the 27 drivers racing against Tim that day.

“The story goes that as they went through the first turn, one of the drivers looked over and saw the monkey, and he almost wrecked,” she says.

That was probably a common reaction that day among Tim’s unsuspecting opponents who included some of the leading drivers of that era: Buck Baker, Curtis Turner, and Herb Thomas.

Tim and Jocko led more than half the race — 87 of the 150 laps — but faded late and ended up finishing fourth, earning a $350 purse. Following the race, Tim took Jocko to the pits, where spectators clamored to pet the monkey and feed him peanuts.

“The children especially loved him,” Frances recalls. “They would come down to see him after every race.”

The winner that day in Charlotte was Dick Passwater, an Indianapolis native who drove only 14 races in 1953, but they included all eight of Jocko’s races. Now 86 and living in Sarasota, Florida, Passwater doesn’t remember noticing Jocko in that Charlotte race, but he remembers racing against Jocko that year.

“Fastest monkey in the world,” he says, punctuating his statement with a hearty laugh.

Passwater and the other drivers found the Jocko gimmick amusing. “I don’t think it had any effect on anybody,” Passwater says. “It was just something to draw attention.”

Tim believed Jocko sometimes gave him an advantage. As Tim tried to pass other drivers, the sight of the monkey staring at them broke the drivers’ concentration just long enough for Tim to gain an advantage and make the pass. Nonetheless, with Jocko aboard, Tim’s winless streak for the 1953 season continued. Following the fourth-place finish in Charlotte, they finished sixth in Macon, Georgia; fifth in Langhorne, Pennsylvania; and second in Columbia, South Carolina.

It wasn’t until Tim’s 10th race of the season on May 16, 1953, at Hickory Speedway’s half-mile dirt track, that Tim took the checkered flag, making history in the process as Jocko Flocko became the first — and still the only — monkey to win a NASCAR race. The Hudson Hornet took the lead after about 30 laps and never relinquished it, beating 26 other vehicles to win the 100-mile race.

The Hickory Daily Record snubbed Jocko in its next-day recap of the race results, reporting only that Tim had “roared to victory … beating off determined threats by many of the nation’s top drivers.” It would be difficult not to notice a monkey in victory lane, and surely by that point word had already spread throughout the Grand National Circuit about Jocko. But the article made no mention of him.

The win earned Tim a $1,000 purse. Tim used to joke about how much he had to pay his monkey codriver.

“All the other drivers at that time were concerned with the percentages they got paid from their sponsors,” Tim told Sports Illustrated for a 1984 article. “I told them that I had it easy. If I got tired after 100 laps, I’d let Jocko drive, and all I had to pay him was a banana and 5 percent.”

Traveling with Jocko proved to be a comical adventure.

“I was turned away from several hotels because they wouldn’t let me bring Jocko in, so I snuck him in a couple of times,” Tim told Sports Illustrated. “He hated maids. Sometimes a maid would come in and see the monkey, and her eyes would bulge out and she would scream. He used to jump on the maids’ backs, ride down the hall for about 40 feet and then jump off. Needless to say, I had a lot of rooms that were never made up.”

Chaos in the car

Back on the track, NASCAR, which today is known to be a stickler for following the rules, turned a blind eye to Jocko. Neither Frances nor Dick Passwater remembers the sport’s sanctioning body suggesting that Jocko might be a bad idea. And considering Tim actually had “Jocko Flocko” painted on the passenger’s side of his car, he wasn’t trying to keep the monkey a secret.

As it turned out, Jocko’s fledgling career would end soon enough. After the historic win in Hickory, Tim and Jocko finished a disappointing 32nd at Martinsville, Virginia, and 22nd at Columbus, Ohio, before arriving at the new Raleigh Speedway on May 30, 1953, for the inaugural running of the Raleigh 300.

Tim believed he could turn his season around with a win at the paved, one-mile track, and sure enough, the Hudson Hornet ran near the front of the pack throughout the race. During the final third of the 300-lap race, only one driver — Tim’s brother, Fonty — was ahead of the Hudson when disaster struck: Jocko slipped out of his seat harness.

Jocko’s curiosity got the best of him. Tim recounted what happened next in the 1983 book Dirt Tracks To Glory: The Early Days of Stock Car Racing As Told By the Participants.

“We had this chain hooked onto the floorboard that we would pull up to check on the wear on the right front tire,” he said. “Well, old Jocko had been watching me do that, and soon as he came unstrapped he went right for the hole and stuck his head through. The tire zipped him on the head, and he liked to have went crazy.”

Jocko screamed and started jumping, and it was all Tim could do to keep his car on the track. Passwater, who finished fifth that day, remembers the chaos.

“Yeah, I saw that monkey jumping around in there, but I didn’t know what was happening,” Passwater says. “He was like a bird in there. He’d be on one side of the car, and the next thing you know he’d be on the other side. … That monkey probably thought somebody was trying to kill him.”

Before it was over, Tim had a monkey on his back.

“It was hard enough to drive those heavy old cars back then under normal circumstances,” Tim once said, “but with a crazed monkey clawing you at the same time, it becomes nearly impossible.”

He had no choice but to make a pit stop and hand Jocko to one of his crew members. The handoff went smoothly enough, but while Tim was in the pits, driver Speedy Thompson passed him to take second place. Tim still finished third and won $1,200, but second place would’ve earned him $1,800.

“The pit stop cost me second place and a $600 difference in my paycheck,” Tim said. “Jocko was retired immediately.”

The next day The News & Observer mentioned Jocko in its coverage of the race, explaining that Tim took a pit stop to unload his mascot. Unaware of what had actually happened, the paper reported the monkey had to get out of the car because “the steady circling of the track made Jocko sick.”

Frances says Jocko was never the same after the Raleigh Speedway incident. He refused to eat and had to be euthanized by a veterinarian.

“Of course, everybody wanted to know where Jocko was,” she says. “Well, a little girl asked Tim about Jocko, and he told her the monkey had passed away, and she couldn’t stop crying. Tim was so tenderhearted, he said, ‘I’ve got to come up with something else.’ So the next week, when somebody asked about Jocko, he said, ‘I couldn’t teach him to sign his autograph, so I had to fire him.’ ”

Tim went on to win 22 more races in his career, including 18 checkered flags in 1955 alone. He won another points championship that year, and after retiring, he was recognized as one of the 50 greatest drivers in NASCAR history. But when Tim died in Charlotte in 1998, even The New York Times couldn’t publish his obituary without mentioning Jocko Flocko.