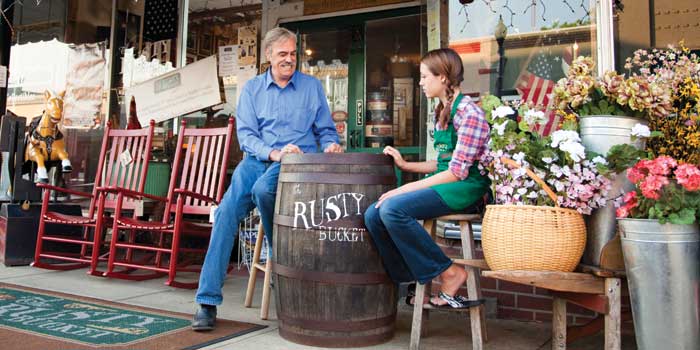 In his faster-paced Hollywood days, John Demers drove all the limousines in “The West Wing,” screeching through the streets of the nation’s capital, running red lights with pretend-President Martin Sheen in the back seat.

He’d pop up on camera sometimes and occasionally get a line in the top-rated political thrill show. The flashiest moment by far came when Demers got to send his black, stretch limo into a tailspin behind the Lincoln Memorial — all without a stunt man.

Demers hobnobbed with the famous. He jetted around the country, living out of hotels, acting, producing, being a big shot.

But all of that stopped two years ago.

As Demers lay in his hospital bed, dying of advanced diverticulitis, he promised to quit traveling and to embrace life in cozy Apex, where he could watch his children grow up, see his wife every day, and find the drama hidden on Salem Street.

The ideas that spun out of his sickbed morphed into “The Rusty Bucket Kids,” the children’s show set on the streets of Apex that stars Demers’s daughter and son — Roxanna and John Coleman — as time-traveling history students.

In the pilot episode, which has now aired on two Triangle TV stations, the Rusty Bucket Kids meet a teenage Abe Lincoln, who is just taking shape as the self-taught lawyer who would one day end slavery.

The kids don costumes suited for 19th-century Indiana, and they encourage a frustrated young Abe to keep reading, keep studying by candlelight, keep reaching for life beyond the backward frontier.

And today, when Demers walks on Salem Street past The Rusty Bucket, the real-life country store where his show takes place, you can tell he’s far happier creating his own story in his own town with his own family.

At 51, he looks like a slightly younger Ted Danson with a mustache, and when he talks about his new ideas for “The Rusty Bucket Kids” — having his kids meet Thomas Edison and Louisa Mae Alcott — you can tell that he’s shaken himself free of both disease and his craving for the fast life.

All he had to do was look around and piece a plot together out of his surroundings: the rocking chairs and checkerboard outside The Rusty Bucket, the Peak City Grill, the wooden train trestle in the woods behind his house, the engines of the New Hope Valley Railroad that carry his children into history.

“When I was sick,” he says, “I told myself, ‘If I live through this, I will see these diamonds in the rough in my own community. I will do family projects. I will pay no hotel bills.’”

Technically, Demers was born in Evanston, Illinois. But he also lived in Beaumont, Texas; Baltimore, Maryland; and Richmond, Virginia; before his family landed in Knightdale — so rural a spot in 1971 that you could drive east out of Raleigh at 55 miles per hour and get there without stopping once.

His mother was a professional actress and at one point toured with Rodgers & Hammerstein. But that’s not why they moved so often. His father worked for Holiday Inn, and the hotel chain opened new locations all around the country.

Demers’s own stage debut came at age 11, when both he and his mother took parts in the Raleigh Little Theatre’s production of “Annie Get Your Gun.” A year later, he scored the part of Artful Dodger in “Oliver,” which led to parts in local commercials. For a time, he ate ice cream with the North Carolina State University cheerleaders in spots for the now-defunct Quik Pik convenience stores.
A
round that time, he met Charlie Gaddy, the longtime television anchorman at WRAL whom locals often called the Walter Cronkite of local news. Gaddy was holding an event that included the precocious child actor, so Demers shook his hand confidently and said, “I know you’re not a real celebrity.”

As a young man, Demers spent some time in the military, took some government jobs, and started a few private ventures — including a stint owning his own limo company, which paid off in his “West Wing” period.

But by the mid-’90s, Demers knew that acting and producing suited him best, and he spent more than a decade working in television and film, often thousands of miles from his family.

That energy disappeared once Demers got sick. He went days without eating at all, losing 60 pounds, withering to a stick figure. By the time doctors diagnosed him, he needed surgery to cure his advanced diverticulitis — a swelling in the intestinal wall.

As he emerged from the hospital, doctors told Demers to remember, always, that he was living a second life.

Demers lives in New Hill, just a few miles southwest of Apex, but as he recovered, he walked down Salem Street, the larger town’s main drag.

It looks, even in 2011, like a street where you might set a production of “Our Town,” or maybe an episode of “Murder, She Wrote.” You couldn’t find a clearer portrait of Americana than on those wide sidewalks, or under those green awnings, or munching at The Pineapple Tea Room.

And as he walked, Demers always stopped at The Rusty Bucket’s big, redbrick building, resting in a green rocker, maybe playing a game of checkers on the barrel out front.

Owners Pam and Mack Thorpe checked on him between selling candles, spices, and knickknacks. And as Demers imagined his new project, he thought, “Why not here?”

Demers spent time in Richmond, Virginia, growing up, and he got married in Colonial Williamsburg. He appreciates a place that looks the same every time you go back to visit.

When you live near the tracks of a 100-year-old railroad, it’s easier to imagine yourself traveling backward through a puff of steam. So that’s exactly what the Rusty Bucket Kids do, climbing onto an engine nicknamed Steamy.

The same checkerboard that Demers fiddled with through his sickness now opens the scenery in Peak City, his imaginary town.

The trestle through his backyard woods carries the train into Lincoln’s Indiana.

And Gaddy, long retired, plays the grandfather who tells the kids the secret of time travel. Today, Demers reports, Gaddy gets recognized as Grandpa Peakssen as well as Raleigh’s Walter Cronkite.

Production occasionally shuts down a street or two, but otherwise, the locals appreciate the attention brought by Demers’s fiction. The Rusty Bucket, coming off years of recession, enjoyed one of its better years in 2011.

“People want to see the Grandpa Peakssen chair,” Pam Thorpe says, pointing to the black-and-yellow-checkered, high-back chair where Gaddy sits during the show.

It’s not “West Wing,” and his actors don’t have names you recognize, but as he pops into the shops along Salem Street, checking in on sick friends, asking how business is faring, Demers feels the richness of his second life — a set he created with the props scattered across his backyard.

Josh Shaffer is an award-winning writer for The News & Observer in Raleigh. Josh’s most recent story for Our State was “Grassroots Pork Co.” (July 2011).