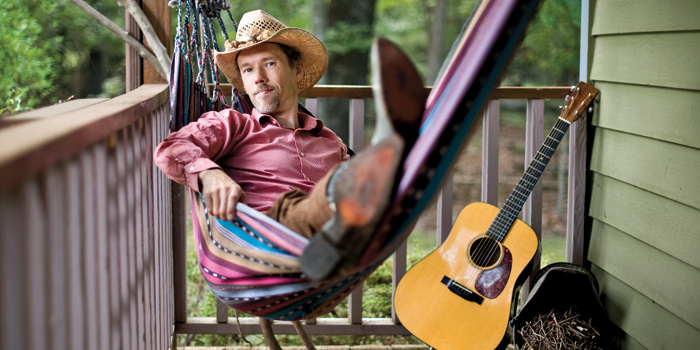 The familiar tunes of old-time music, a precursor to bluegrass, sneak up on even the most rigid of folks, slyly casting a bobber down from a man’s eardrums to his toes, pulling at his foot like a puppet string till he can’t help but tap along. And as Jonathan Byrd has learned since he first launched his career as a folk/country singer and songwriter in the 1990s, the bare-bones simplicity of old-time is as durable and welcoming as the community that nurtures its traditional place in our local culture.

Byrd is a seventh-generation North Carolinian — a tall, skinny Southern boy with faint stubble and a straw hat, whose rootsy sound resembles bluegrass legends Doc Watson and John Hartford. His stage is often humble — a brightly lit community hall, the creaky steps of a Carolina front porch, a stool at the front of a dim saloon in Texas or even Canada — and likewise, he plays simple music designed for anybody to join in or dance to.

The intimate performance life of old-time, bluegrass, and country music has created a home for Byrd unlike any he’s ever known. Despite his deep Carolina roots, Byrd’s always been a bit of a drifter — first by fortune, then by choice — since he was born in Fayetteville in 1970. His first memory is crossing the Mississippi River in a Texas-bound U-Haul. The family moved again a few years later when his father was commissioned to preach in an English-speaking church in West Germany. Like many other musicians, Byrd first found his voice singing hymns like “Amazing Grace.” Byrd returned to North Carolina in time for his adolescent years, but he wanted to “get the hell out of town” after graduating from Orange High School in Hillsborough. He joined the United States Navy, spent some time in the Mediterranean on a tank-landing ship, and then moved to Virginia Beach, Virginia, when he got out and started playing rock ’n’ roll gigs and delivering pizza.

Byrd finally came home to North Carolina in 1993 and started working at Weaver Street Market, a co-op in Carrboro. “It seeped into me a little bit that there was a cool music scene,” he says. “There was jazz on the lawn, world music, people dancing. In a lot of ways, [Weaver Street] single-handedly created this new, vibrant community in that town.”

A few years later, Byrd discovered the type of music that made him feel as if he was a part of something — something that he could be great at. After getting his first acoustic guitar, Byrd went up to the Rockbridge Festival in Buena Vista, Virginia, where he discovered and fell in love with old-time. This more traditional, pre-bluegrass style of folk music usually calls for only three consistent chords — maybe four if the guitarist is feeling fancy — that dance around a wailing fiddle and the beat of a banjo. Expansive repertoires distinguished the greats of this genre — people like Tommy Jarrell and Fred Cockerham. They knew hundreds of fiddle tunes by heart and spent years sitting around and teaching them to other musicians. “Everybody sings the same songs,” Byrd says. “There are maybe 50 tunes that you hear over and over again, songs like ‘Wayfaring Stranger,’ ‘Fox on the Run,’ ‘Rocky Top.’”

The rock ’n’ roll energy of the sound struck Byrd, intrigued by the accepting nature of the players and the legends they sang about. As Byrd attended more festivals, a new focus ignited his musical ethos.

“The words were about love or drinking or someone dying,” he says. “Very simple words, and yet, I was electrified by the hard-core drive of these people.”

Byrd resolved to contribute to the genre by adding more original songs to the canon of classics, which required reconciling the traditional style with new, compelling stories that people could grasp.

“I was inspired to write songs in an old-time style, but I said to myself, ‘These people need some new songs,’” Byrd says. “Those songs from those times were about those people, and we need some songs about us.”

His songwriting efforts gained him a significant place in the music world. In 2002, Jack Lawrence, Doc Watson’s right-hand man and one of the most influential flat-picking guitarists in the United States, recorded Byrd’s ballad “Velma,” a true story about the last woman ever executed in North Carolina — the murderer of Byrd’s grandfather. Notable DJ Rich Warren from Chicago, Illinois, added Byrd to his list of the 50 most significant songwriters of the past 50 years. The list includes Gordon Lightfoot, Joni Mitchell, and Leonard Cohen. And old-time players of all skill levels welcome Byrd’s songs into their repertoires, often mistaking them for old-time songs written years ago because of their authentic, catchy sound.

Byrd’s music, which he now technically classifies as country, plays throughout bluegrass communities worldwide, but his latest album reflects the inspiration he finds in the people and places close to home in North Carolina. Songs with familiar images, such as the Pamlico Sound, resonate with locals, but Byrd doesn’t always rely on geographical familiarity to hit home with listeners. He also delves into more personal arenas of love, death, and loneliness, such as his desire to please his father in the song “Father’s Day.”

“There’s a reality to the songs and an honesty to them that most people can hear,” Byrd says. “Even if they don’t directly identify with them, they can say, ‘That’s True.’ Even if it’s not necessarily a true story, it’s an event that very well could’ve happened, and the characters in that song are acting the way people act.”

The community that surrounds old-time, which initially attracted Byrd, still means the most to him. The enchanting, collaborative sound that comes from mixing banjo, fiddle, guitar, and other string instruments reflects the sense of partnership that first welcomed Byrd and allowed him to thrive in the industry.

“With folk music, people will put on house concerts for you, they’ll promote it to 50 of their friends, they’ll work hard to make delicious food for everybody, and then any money that comes from the door they just hand to you, no questions asked,” Byrd says. “It’s so incredible how supportive it is.”

Although the social occasion of a live performance is the accustomed medium for his style of music, Byrd’s understanding and love for this tight-knit community seeps out through his recordings in a contagious way that makes the listener feel included. Some of his songs feel familiar, even when hearing them for the first time. Some of them, the slower ones, feel lonesome or nostalgic. But all of them, in some way, stick to the soul — if not because of the tune, because of the story being told. All of them feel like home.

Waterbug Records, 2011, 10 tracks. $15. Available at jonathanbyrd.com.
Recorded in a converted-garage studio in Ontario, Canada, in a single, six-hour take, Jonathan Byrd’s most recent album, Cackalack, is the next-best thing to witnessing a private, impromptu performance by some of today’s most talented folk musicians. The original songs, written by Byrd as a tribute to his family’s seven generations of North Carolina heritage, give a sound to the timeless spirit of the people and places you find here — by way of guitar, fiddle, bass, banjo, mandolin, piano, and accordion. The title, Cackalack, is old-world vernacular for “Carolina.” In songs like “I Was An Oak Tree,” Byrd develops a simple object — in this case a piece of oak wood that evolves into a slave ship, then a piece of driftwood, then a fire log, and finally an oak tree that watches out over the Eastern shoreline — to pay homage to historic people and events. He sets his songs in familiar places — the Outer Banks and Interstate 95 South. Wooden instruments and bluesy supporting vocals keep pace in the spaces of Byrd’s clear, rootsy voice, the various strings blending behind his words like the soft crackles and occasional pops of a campfire. The mood of the tracks goes from jaunty, driving tunes, such as “Chicken Wire” and “Reckon I Did,” to sad, plaintive ballads, such as “Wild Ponies” and “Scuppernong,” giving it a dramatic truthfulness that reflects the push-pull nature of life and lessons learned.

Enjoy these tracks from Cackalack

Chicken Wire
I Was An Oak Tree
Father’s Day

Lauren Howell was an intern at Our State magazine during summer 2011.