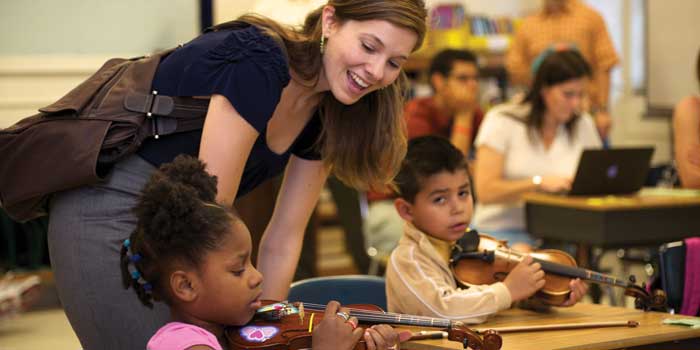 She’s left the capacity crowd on their feet. After such a rousing performance of Mozart’s Magic Flute and de Lulli’s Chopsticks in Meredith College’s Carswell Concert Hall, it’s hard to believe that a little more than a year ago, 9-year-old Ayah Eltayeb had never seen a violin.

Yet here she is, a recipient of a full scholarship to the Lamar Stringfield Music Camp, one of 24 students in the beginner orchestra, and the child with the biggest grin on her face.

Eltayeb wouldn’t have made this accomplishment if it weren’t for Katie Wyatt, a young woman with a vision that changed the lives of some of Durham’s most impoverished children in just one year. Wyatt is the executive director of KidZNotes, a three-year pilot program that introduces children from Durham’s lowest-performing schools to classical music and the joys of playing an instrument. Like Eltayeb, many of these children had only seen a violin on TV, and they definitely couldn’t read music. But Wyatt knows the value in learning to play an instrument, in being a single violin in an orchestra, in working as part of a greater whole.

Thirty-two-year-old Wyatt is a musician herself. At Indiana University, she earned degrees in both viola performance and political science, and her talents on the viola earned her a master’s degree at the Cleveland Institute of Music in Cleveland, Ohio. At a young age, Wyatt realized the power of music, particularly classical music, as a catalyst for social change.

Wyatt was able to combine her passion for the viola and community-building through the Youth Orchestra of the Americas, a multicultural orchestra of 100 gifted musicians from the Western Hemisphere. Through the orchestra, Wyatt traveled to Venezuela, where she had to reaudition for her chair within the orchestra. Fully expecting a principle position, she was shocked when the principle chair went to a 19-year-old Venezuelan girl from the slums of Caracas. The girl learned to play the viola through El Sistema, a world-famous program that brings orchestral music to Venezuela’s poorest children in hopes that the music will teach them to become a generation of social change for a struggling community.

“I was blown away by the artistic merit,” Wyatt says. “I never felt sorry for them. I was always just flat-out floored that these kids were playing like they were out of the best conservatories in the world.”

Five years later, after a stint with the North Carolina Symphony and a distinguished fellowship that put her under the instruction of El Sistema directors, Wyatt brought what she learned to the United States — to Durham.

Duke University came through with a big donation and provided an $8,000 gift of 60 violins for the kids to keep as long as they are in the program.

Sixty kindergartners through third graders from three Durham elementary schools started at the very beginning. The kids and their families committed to almost 10 hours of rehearsal a week — Mondays, Tuesdays, Thursdays, Fridays, and Saturday mornings. The kids learned about rhythm. They learned about notes. They met their violins. And they began making music.

As is natural, some kids progressed faster than others, but that’s the beauty of the program — the students become teachers, Wyatt says. “You push them in and watch them go. They get it by osmosis, by hearing better players, by having coaches constantly around them. Precision is not the number-one goal; performance is.”

The KidZNotes children performed 22 times throughout the year, even alongside the Durham Symphony in March when each child sat beside a professional and played Pachelbel’s Canon. Wyatt believes the children’s many roles in the program — as musicians, as mentors, as performers, and as friends — give them the tools necessary to live as productive members of their communities, to stay in school, and to make a difference.

She already sees the potential in Ayah Eltayeb.

“Her little brother Abdullah is a kindergartner, and she’s taught him everything she knows — making sure he can aim to play as well as a third grader, instead of a kindergartner,” Wyatt says.

Next year, KidZNotes will add another Durham elementary school and about 40 more students. Wyatt wants to add the viola and cello, the trumpet, and even some percussion to the ensemble of violins, putting the kids one step closer to sounding like a “real orchestra.”

Real orchestra or not, a Beethoven symphony or “Mary Had a Little Lamb,” Katie Wyatt and her kids are changing Durham for the better, one note at a time.

Taylor Rankin was an intern at Our State magazine during summer 2011.