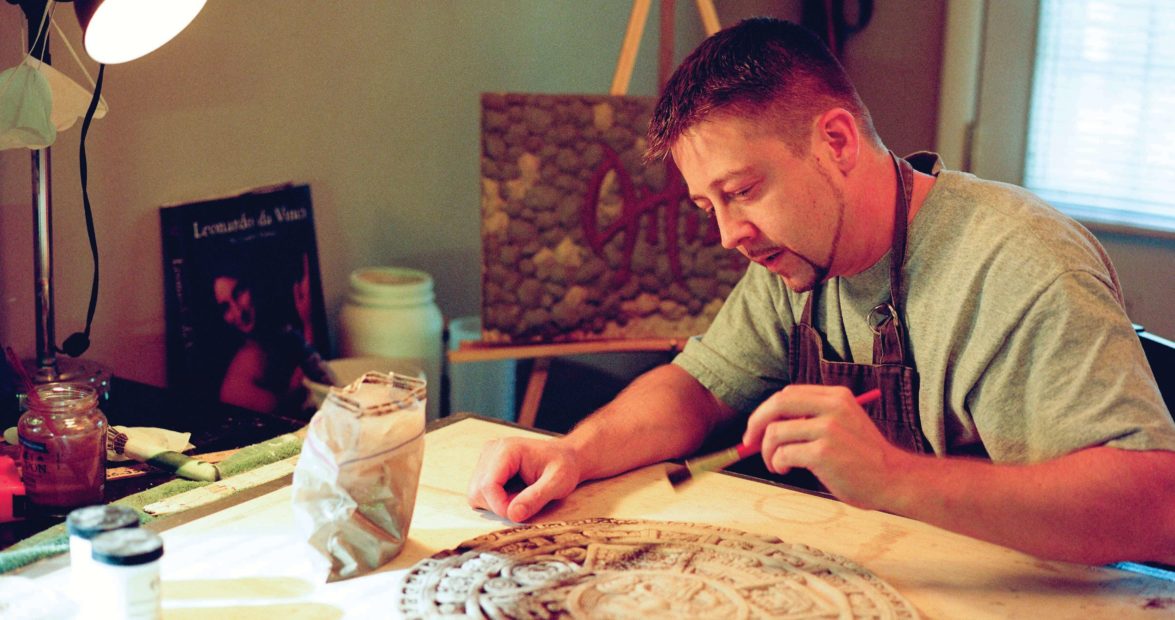 The nicks and scratches on Kevin Cagle’s kitchen table tell a story. It’s a story of commitment.

Early in the evening, Cagle sits at the table in his Carthage home with his three boys. They eat the dinner he cooked for them, and talk about the day, and make jokes, and basically hang out.

When dinner is done, Cagle, who’s raising his sons on his own, cleans up the dishes, checks homework, makes sure everyone has brushed their teeth before sending them off to bed, and gets set to go to work, at his kitchen table.

“I do all of my artwork here,” he says of the room that smells faintly of fresh basil from last night’s spaghetti.

Since 2003, Cagle has spent untold hours bent over this table, transforming clay into works of art and, he hopes, crafting the life he dreams of for himself and his boys.

Every morning, Cagle meets his mom for coffee at the house where he grew up. From there, he heads to City Barber Shop, where he cuts hair in the same block on the Courthouse Square where his great-grandfather and grandfather were dentists. He can tell you anything you want to know about the small town, best known for manufacturing the Cadillac of horse-drawn buggies in the mid-1800s.

His roots hold him fast here. But recently, in that time spent at his kitchen table, he has started looking outward. He thinks about the places that inspire his art; they are the same places that his art may one day take him and his boys, Addison, 13, Brett, 12, and Jackson, 2.

For seven years, Cagle has been creating high-relief tile carvings, works beautiful enough to adorn walls and durable enough to accent a backsplash. His specialty is producing detailed tiles depicting classic works of art, ancient civilizations, and prehistoric creatures. And he does it all using nothing but an artist’s eye, a flat board, a slab of molding clay, and a small, wooden tool typically spared for oral hygiene.

“The toothpick is mightier than the sword,” says the 36-year-old Cagle, smiling.

Self-taught, Cagle spent two years on his first creation — an impressive 30-inch by 22-inch replica of Leonardo da Vinci’s Last Supper. Once he finished it, he devoted himself to learning how to duplicate it.

“I taught myself the mold process, and let me tell you, it was nothing but blood, sweat, and tears for five years,” he says, his thick Southern drawl carrying a blend of pride and humility.

The learning curve was a long one; Cagle confesses to cracking and ruining dozens of the tiles. “By the fourth or fifth time, it’s pretty upsetting,” he says. “Trust me when I say tears — I’m serious. And sweat. And blood.”

He laughs it off. He’s getting to where he wants to be — making his living as an artist. He gestures to his first Last Supper reproduction, cracking a sheepish grin. “But now I finally have pieces I can show.”

Standing in his kitchen, not far from a collection of aprons hanging neatly on a wall hook between his workspace and refrigerator, Cagle traces his fingers over the face of the central figure of his second masterpiece, a 29-inch-square Aztec sundial. He feels the intensity of the fierce Mesoamerican sun god, then his hand glides to each of the intricate rings and glyphs that compose one of the most ancient, accurate systems of dating known to man. Cagle knows every inch of this archaic image.

So does his toothpick.

“I don’t know exactly what all of their theories were,” says Cagle, who drew his inspiration for this piece from a show on the Discovery Channel. He pauses over the various symbols — images of beasts, reptiles, birds of prey, and elements of nature — as if he’s studying them. “It sort of makes you wonder how they were able to do this so long ago. … Then again, they navigated by the stars. It’s probably stuff that would be common sense today, if we just looked up once in a while.”

In a nod to the Mayan calendar and the pop-culture furor over its prophecy of a 2012 apocalypse, Cagle’s Mesoamerican tiles are a limited edition.

The first one he produced now hangs on the wall of Casa Garcia, a local restaurant.

Cagle’s current project sits on a slightly warped easel, a thin piece of hardy board covered with recycled clays from sculptures past. “They were little pieces, mostly. Pinecones and golfers, things I could probably sell locally,” he says.

He sculpted the bare bones of an archaeopteryx onto the center of the work. Today, he’s refining the raised detail with his toothpick, fashioning it into a realistic depiction of a fossil, which dates to the Late Jurassic Period. It’s another Discovery Channel inspiration. The replica reveals a winged, bird-like beast, feathers perfectly preserved through the passing of time. For theorists who believe dinosaurs were more like birds than lizards, this could be confirmation.

“Look at an ostrich, how big and tall it is. Look at its legs. It’s a descendant of a dinosaur,” the artist says with a scientist’s conviction. He works rhythmically, without hesitation.

The process of creation

When asked his secret — how he’s able to flawlessly produce such colossal, highly detailed reproductions of an original — Cagle smiles. “There are certain things an artist should never reveal,” he says, referring to the sketches and diagrams that he has safely stowed away in one of his many invention-filled notebooks.

Despite declining to tell all, he does explain part of the process. It involves two molds: one of the dinosaur’s skull, vertebrae, and feet; the other of its outstretched wings set in a surrounding stone. The former will be inlayed into the latter in different colored clay.

“Everything about my work is handmade,” he says, from the casting to the individual fine-tuning and signature that mark each replica.

After being glazed and fired, the fossil tile will be a fireproof, waterproof, rock-like final product. Artwork etched in stone.

“I want it to look like it was dug up from the earth,” Cagle says.

The long nights bent over the table are starting to pay off for Cagle. He sells his work through his website, artileinc.com, and plans to debut his masterworks collection at the 29th Annual Seagrove Pottery Festival, held the weekend before Thanksgiving. These successes give him hope.

“This is something I want to do until the day I die, whether I make money from it or not,” Cagle says.

His ultimate goal is to pursue his art as a career. And then maybe he can travel to the places he’s only been while channel surfing and show his sons the wider world.