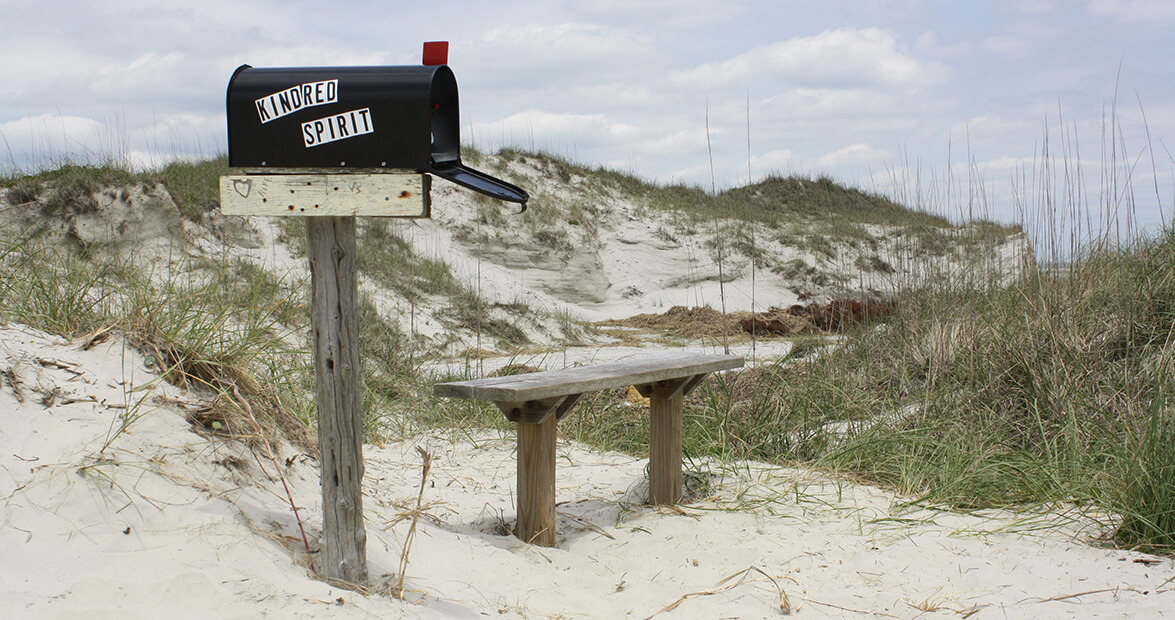 You know you’re heading in the right direction when the smell of Hawaiian Tropic sunscreen and jabber pulsating from stereo speakers begin to fade.

Your bare feet, however, will have their doubts and pester you with every step. It can’t be this far away. Ouch. Just turn around. Ouch. Please. Ouch. It’s their cadence, and it’s your own fault that you didn’t wear shoes on this 1.4-mile walk from the pier at Sunset Beach to Bird Island.

But you keep walking anyway until you see the American flag flapping in the wind, just as locals promised. You walk not just because you want to, but because you need to. Like thousands of those who have journeyed across this shoreline before you, you have something to say, something you need to get off your chest. And you’ll need someone who will listen.

You’ll meet her — well, 88-year-old Frank Nesmith thinks it’d be a woman, if it were a person, that is — waiting for you by the dunes next to a bench. She’s the Kindred Spirit, a community mailbox that holds and protects a handful of journals, a few pens, and the thoughts, fears, hopes, dreams, and grief of those who visit her.

By some estimates, more than 100,000 people have visited her over the years, which is nothing short of a phenomenon for the undeveloped, quiet haven of Bird Island. It still takes Nesmith by surprise.

“The fact that they do write in there, it’s something within them that makes them do it,” Nesmith says. He’s tended the mailbox since its beginning, some 34 years ago.

But of course, behind every smart idea is an even smarter woman.

“I’m sure it was her idea,” says Nesmith, referring to a woman named Claudia who he briefly dated in the late 1970s. “You know, when you go with a girl, you want to do what they want you to do because you might want to get a kiss.”

On a breezy Saturday before Memorial Day, we rock away the morning on Nesmith’s porch overlooking the Intracoastal Waterway as he recounts the story of the mailbox. Two of his friends who help with the mailbox, Jacqueline DeGroot and Sandy Payne, sit with us.

DeGroot, a local romance author, confirms the mailbox was Claudia’s idea. The pair regularly exchanged emails until Claudia’s passing in 2013.

“She had this mirage in her head for many years of a mailbox in the sand, and she never knew why,” DeGroot says. “Over the years, it would just pop into her head. When she came to Sunset Beach, it all started to make more sense.”

Claudia first put up the mailbox on a spit of sand on Tubbs Inlet, which separates Sunset Beach and Ocean Isle Beach. When the little island got washed away with time and the changing tides, the mailbox was moved to Bird Island in 1983.

At its new location, it began to attract many visitors. When there was still an inlet between Sunset Beach and Bird Island, vacationers would have to swim across the forceful waters or wait until low tide to walk across. It was a trek, but still, they came.

When Claudia was alive, she wished for her identity as the Kindred Spirit’s creator to remain anonymous, even to DeGroot. In one email, she wrote, “The Kindred Spirit is a way of being — not a person,” and signed it, as always, “Your Friend, K.S.”

Much of the mailbox’s magic is that those who write in its journals can remain as anonymous as they’d like to be. Many people leave no name while others include their first and last. Some sign off with a single initial. We all crave to be remembered, but, oh, how there’s power in remaining unknown, too.

A blank page is an immeasurable gift in life, and the Kindred Spirit has journals filled with them. Redemption clings to the air like salt here, where friends of the Spirit trust it enough to confess wrongdoing, admit mistakes, and seek forgiveness.

While flipping through old notebooks, you’ll find several notes in which a Kindred Spirit visitor apologizes to a loved one for a fight they had.

“This place here and now is my reality,” an entry reads from someone who had just been released from prison.

But Nesmith doesn’t forget all that he’s read in the journals. He can’t. Every person who has written to the Kindred Spirit has lived a life, each worth knowing. He always keeps a couple of filled journals on hand at his house.

“I’ll tell you what, you can go through emotions from the sky to hell reading one right after another,” he says.

Those who visit the mailbox once likely return to this sacred place time and time again.

Sometimes they return each year on the anniversary of a loved one’s death, or they come back to celebrate beating cancer. A woman even left a sonogram in the mailbox the same day she found out she was pregnant. While many entries hinge on sadness, there’s also hope. 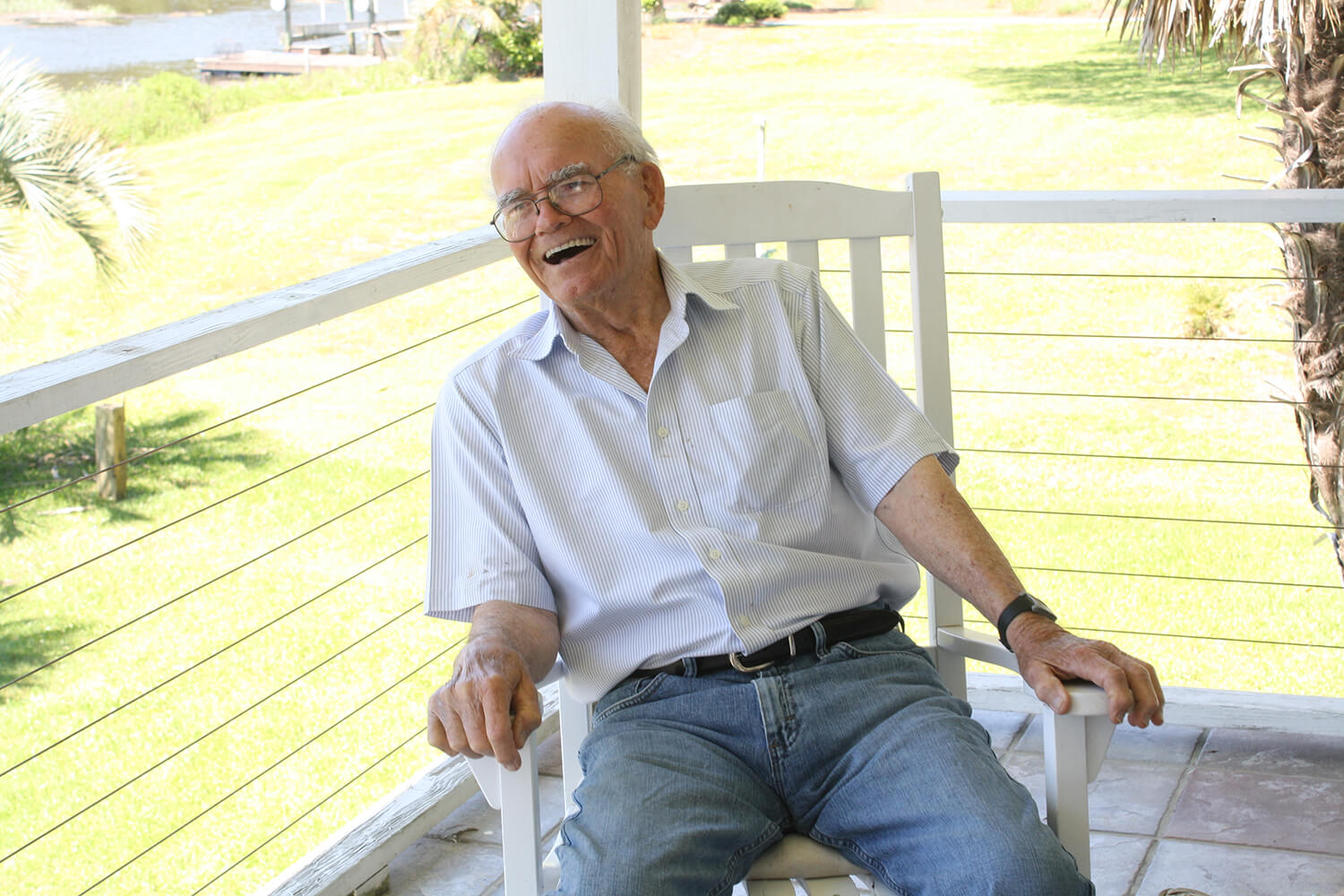 Nesmith tells the story of a husband and wife, who first met at the mailbox, later got engaged there, and built a house on Sunset Beach.

“Just because of that damn mailbox,” he trails off. “And I know that sounds like a lie, but it’s not.”

Nesmith himself met his second wife because of that mailbox.

“She was so impressed with me that she didn’t say no,” he says with a toothy smile.

Truth be told, he has met a lot people on those walks to Bird Island.

“I’m walking down the beach, and I see a young lady come by,” he says, recounting a recent trip down to the beach. “She says, ‘Frank, how you getting along?’ I don’t know who in the world she is. To tell you the truth, I don’t know if I ought to shake her hand, hug her neck, or kiss her right on the lips.” His joke is met with hearty laughter.

Nesmith doesn’t get down to the mailbox as often as he’d like to these days. The walk is hard on his legs.

“That’s when the Kindred Spirit did most of its work, in the summertime. Anyhow, it took care of itself. It’s taking care of itself now — very well.”

But he isn’t giving himself enough credit. When Tropical Storm Ana made landfall on May 10, sweeping the mailbox out to sea, Nesmith feverishly emailed and rallied people to get a new mailbox installed just days after the storm passed.

“You know, how many people have had the legacy that this man has?” Payne says of Nesmith. “This will live on way after all three of us are gone. These people may or may not have met him, but he will touch people who haven’t been born yet.”

When I finally arrive at the Kindred Spirit, I admire the smoothed driftwood post it sits on. Original to the very first mailbox, it was recovered by volunteers following Ana’s wake.

I trace my fingers along the red flag, forever perched upright, a constant reminder of the importance of what this mailbox holds.

Taking my time flipping through notebooks, I search for entries from people who were there just before me. There’s talk of grandmotherly angels, spending time with Dad, and dreams of one day competing in the Olympics. We don’t walk alone in this world.

I sit down on the bench and pause for a moment, breathing in the sea.

The journey here was long, but the message I write is short.