The 1958 Chevy Impala struggles to start in the chilly air. It ruh-ruh-ruhs, sounding like a whinnying horse before whimpering to silence. Alan Banner, his hand on the giant steering wheel, again taps the gas pedal, again turns the key, and, again, the engine begins its neighing.

“Come on,” he says as the shiny white automobile rolls backward out of the garage. Beneath the hood, the flywheel spins and spins — I think I can, I think I can — until that magic moment when the engine roars to life. It’s deep and guttural. When he gives it gas, it hums like a song. Alan shrugs off the car’s sluggish start, chalking it up to having not driven it for a few days. “You get to know the idiosyncrasies of the car,” he says. “Takes a while to warm up, but it runs good.”

We cruise down Old Mocksville Road outside Statesville, passing rolling brown pastures and subdivisions, crossing Interstate 40, and turning east onto the old road — U.S. Highway 64 — with no particular place to go. We pass modern cars with LED headlights and backup cameras; the car we’re in has old-fashioned circular sealed-beam headlamps and a dashboard refreshingly free of screens and digital doodads. It has flashy fins and chrome and whitewall tires, and it gets maybe nine to 10 miles per gallon. “If you’re gonna get a car like this,” Alan says, “you don’t really check the fuel mileage.”

Alan is 74, a retired pharmacist who’s adored old cars since he was a kid. When he turned 50, after years of working marathon hours in his drugstore, he decided to ease off the gas and indulge himself in interests beyond his career. It sounds like the classic midlife crisis: He told his wife, Sandra, that either he could get a Harley-Davidson, he could get back into flying (he’d received a private pilot’s license decades ago), or he could buy an old car. “You ain’t getting a Harley-Davidson,” Sandra told him. “And you’re not gonna get back into flying.”

Sandra took a shine to the idea of getting a classic car. “It sounded fun, and he loves old cars,” she says. “That’s one thing that we can do together.” 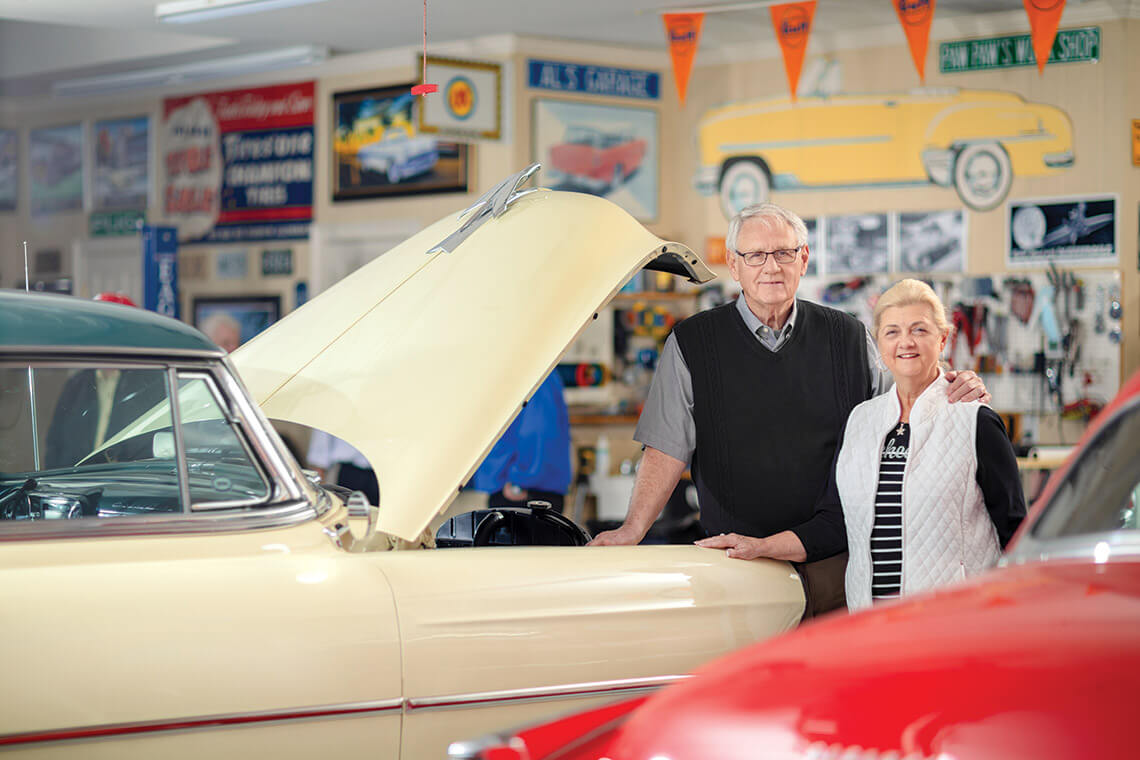 Alan and Sandra Banner have a soft spot for his yellow 1953 Bel Air Sport Coupe. It’s the first vintage car that he bought when he began collecting them at age 50. photograph by Jerry Wolford & Scott Muthersbaugh

So Alan bought a 1953 Chevrolet Bel Air and “drove the heck out of it,” he says. Later, he got another ’53 Chevy — a 210 Club Coupe, which is similar to the Bel Air but slightly scaled down. It’s the same kind of car that he drove in high school — the same model that he had when he first started dating Sandra.

Alan went on to start the Carolina Crossroads Region chapter of the Vintage Chevrolet Club of America about 20 years ago. He built a garage behind his house that shelters nine cars from the 1950s, including not only five Chevys but also two Cadillacs and two Oldsmobiles. All are in pristine condition, their paint jobs sleek and unblemished.

The car club has 34 couples as members. The men are quick to mention that their wives play integral roles in the group, riding shotgun on road trips to Flat Rock or Blowing Rock or up into southern Virginia. “We could just be a bunch of crusty old men who get together once a month and talk about carburetors and compare $12 trophies,” he says. “But our wives have brought a whole new dimension. We’re just like a big family.” 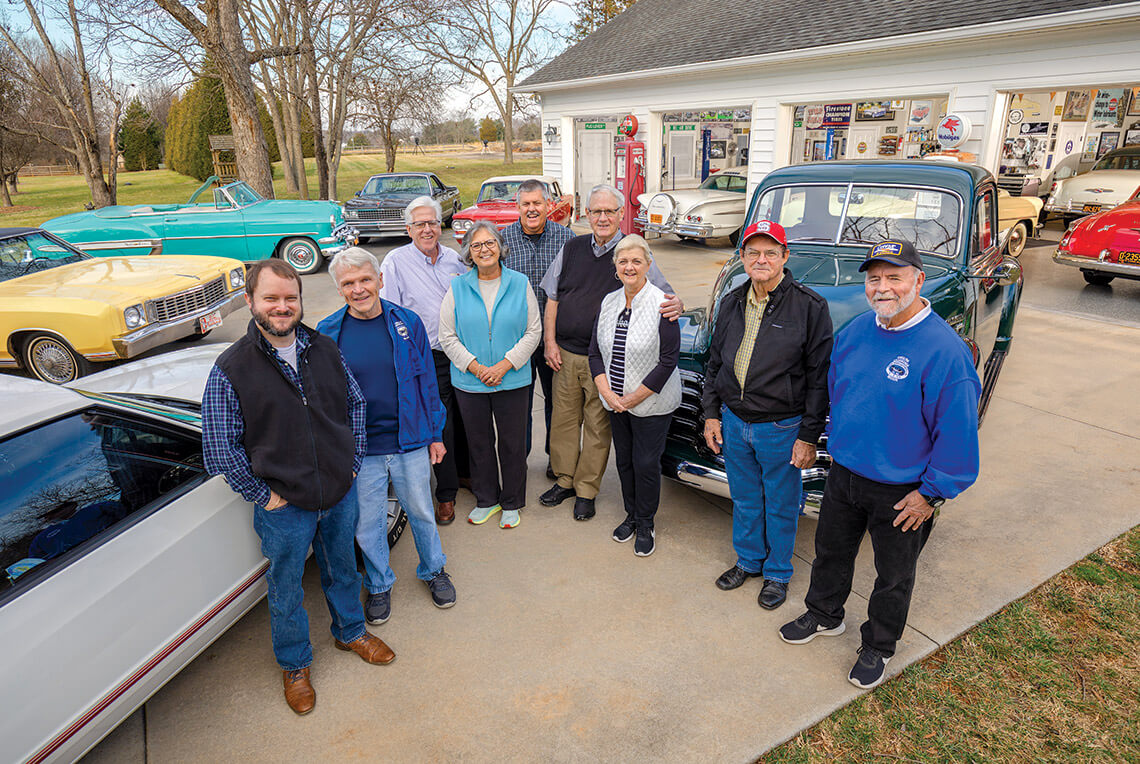 Sandra prefers to take the slow lane, and the old cars allow for leisurely drives with dear friends. She admires the beauty and the bold designs of yesteryear’s automobiles. “The old cars, they just have character,” she says. “They have personality.”

One club member, 67-year-old David Puett, used to own a 1940 Chevrolet Master Deluxe — sans air-conditioning and turn signals — that he put thousands of miles on while roaming North Carolina’s back roads. But after about 20 years, he sold it and ended up buying a black 1986 Chevy El Camino.

The El Camino, for those too young to remember, is basically a cross between a car and a pickup truck: business in front, country in back. It’s one of my all-time favorite automobiles, so when Puett offers to let me drive, I feel like a kid getting Dad’s keys for the first time. While it’s nearly 30 years younger than the Impala I’d just ridden in, the interior still looks spartan compared to cars these days. The steering wheel is hard and thin. The car makes me feel more attuned to driving rather than being coddled by high-tech comforts. I cruise along Jane Sowers Road, cross Interstate 77, and turn down some neighborhood streets. Windows rolled down, one arm on the wheel: I feel pretty darn cool. 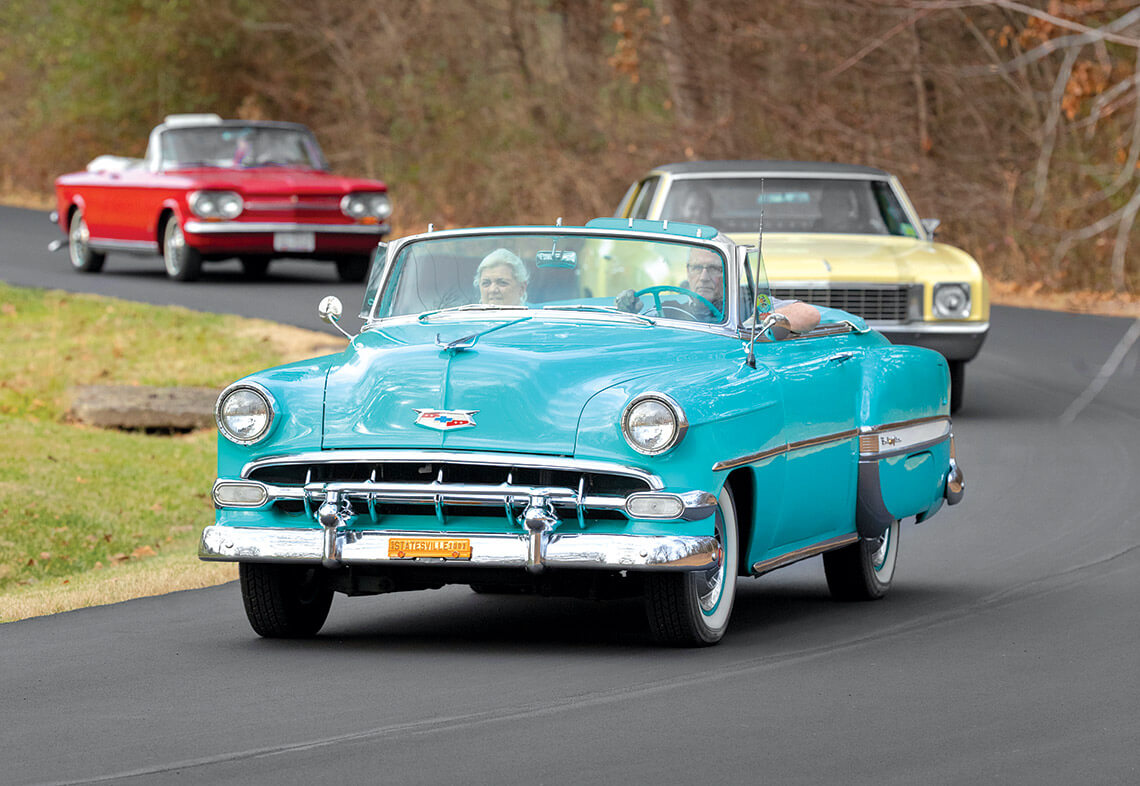 About once a month, Alan and the other members go rambling through the countryside for a picnic in Salisbury or a cruise through Mount Airy. They follow the slow roads: U.S. Highway 21 north to Sparta; U.S. Highway 64 up through Hiddenite and Taylorsville; U.S. Highway 321 to Blowing Rock. Once a year, usually in summer, the group will spend three nights in Blowing Rock, their cars adding nostalgic, steel-and-chrome scenery to the already picturesque mountain town.

Puett says that these back-road trips restore the symbiotic relationship between car and driver: Your senses are heightened, and you feel at one with the machine. “You got your windows down, you got your vents open, and the fun thing about that is that you concentrate more on driving,” he says. “My most important gauge is my temperature gauge. It isn’t the gas gauge; you keep an eye on your temperature. You spend more time driving and looking.”

On one excursion into eastern Tennessee, along a serpentine stretch of U.S. Highway 421 known as The Snake, the club’s drivers got quite the workout. Many of their cars have no power steering, Alan says, “and I’m gonna tell you, we had people come back who were physically beat.”

The cars, not surprisingly, turn heads and fire up conversations. “Oh God, everywhere,” Alan says, noting that small children see the wheeled beauties and “just grab their mamas and point at the cars.” On our jaunts today outside Statesville, people at red lights and stop signs, people in front yards and parking lots, stare and smile.

Alan takes me for a second spin in another car: not a Chevy, but a sky blue 1950 Cadillac Fleetwood Series 60. It’s cavernous and bulbous and has a trunk spacious enough to fit four golf bags and maybe even the cart. We chat about classic car movies, and I admit my affinity for Pontiacs and the ’77 Smokey and the Bandit Trans Am. Alan is partial to his ’58 Impala, the kind that Terry “The Toad” Fields drove in American Graffiti, a movie Alan figures he’s watched 50 times. Quoting great lines from old movies while cruising along the open highway is one of life’s great pleasures.

He takes me on another ride, this time in a red 1963 Chevrolet Corvair convertible with a white top. The car’s owner, 71-year-old Mike Parker, calls it a “poor man’s Corvette.” Parker bought it for its “sentimental value” — his mom, dad, and older brother each had one.

Most of the Statesville car club members don’t fancy themselves as gearheads — folks who do all their own mechanical work. They’d rather not spend gobs of time tinkering under the hood; they prefer enjoying the beauty of the cars and the thrill of getting them out on the open road. “I’ve always loved old cars, loved looking at them, loved reading about them,” says Alan, who’s also a prolific collector of car-related memorabilia. His garage walls are plastered with license plates, photos of classic automobiles, old motor oil ads, and an “Al’s Garage” sign. 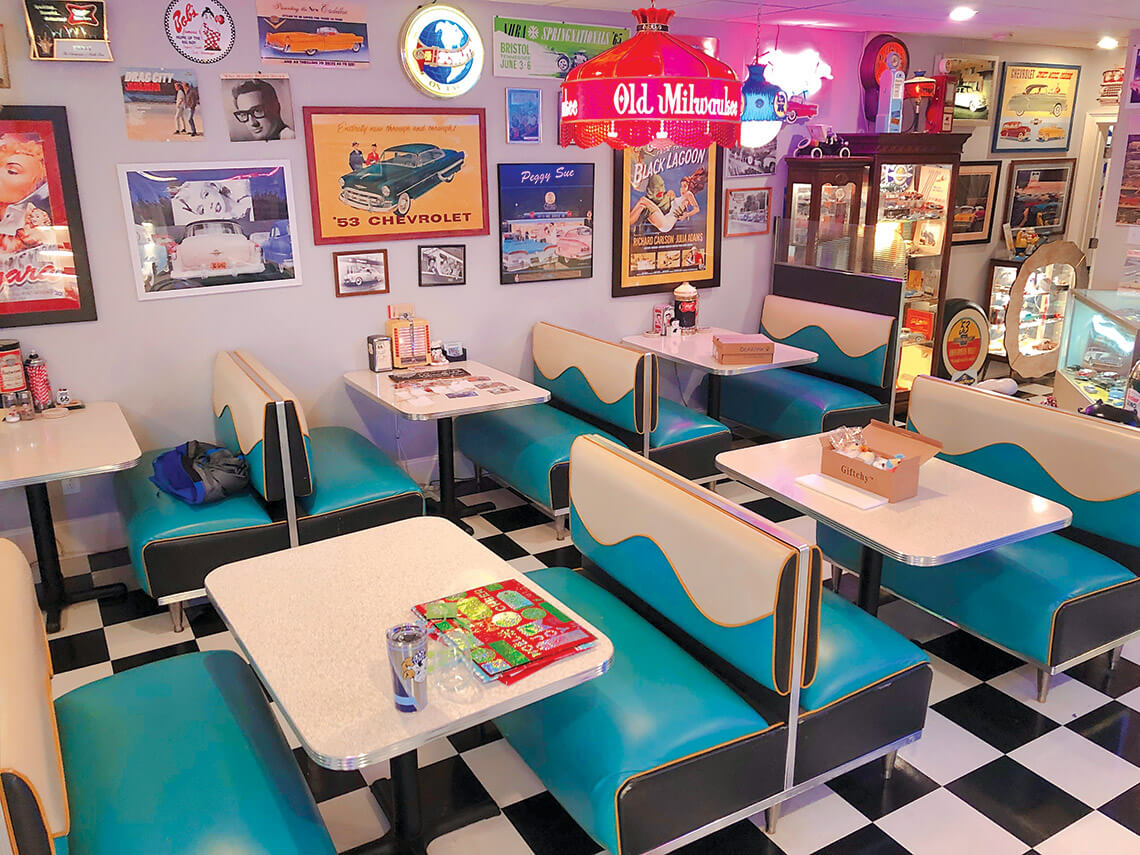 In the basement of the Banners’ home is a “man cave” that Alan calls the Bel Air Grill ’50s Diner. photograph by Jerry Wolford & Scott Muthersbaugh

Walking into the basement of his house is like stepping into a ’50s diner that doubles as a museum. It has restaurant booths, a working jukebox, pictures of Patsy Cline and Buddy Holly, lighted beer signs, and a fridge stocked with Yuengling. “If you don’t mind, Al, I’m gonna grab a beer,” Parker says, and the next thing you know, everyone has a cold one in hand, talking about favorite cars and favorite places.

As the jukebox plays the early-’50s R&B hit “Sixty Minute Man,” it’s as good a time as any to think about the next road trip. To Granite Falls or Fancy Gap, Virginia. To a good place to have lunch. To a nice spot to stay for the night. It’s always important to get the flywheels spinning, the crankshafts turning, and those shiny grilles in the wind, aiming for the horizon and taking us back.