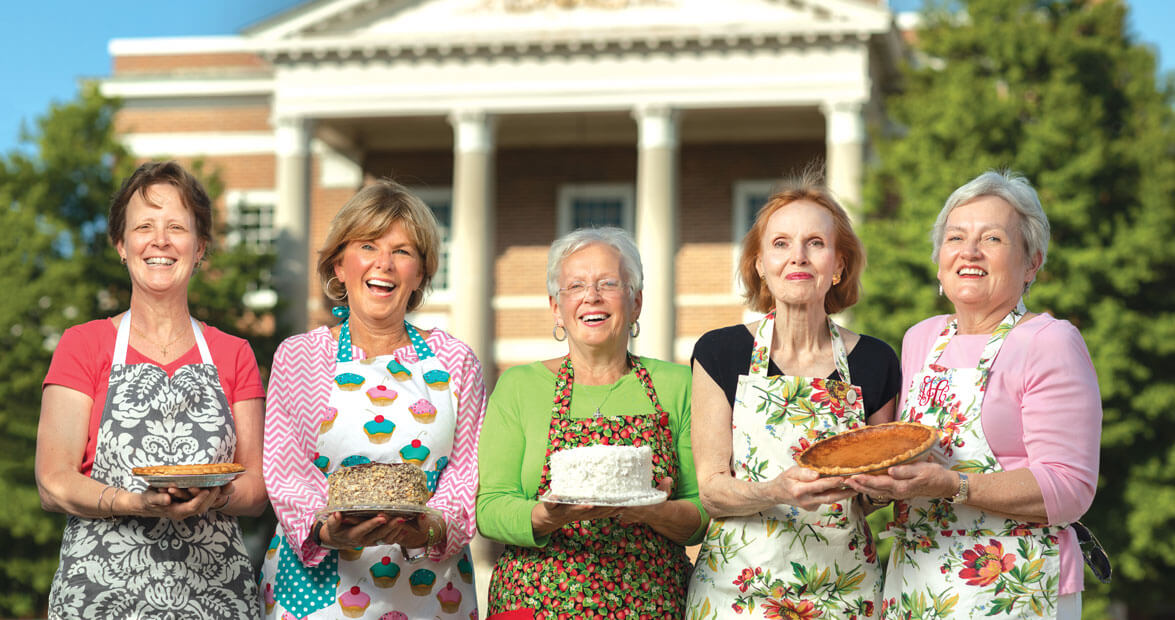 Hundreds of people are coming for lunch today, but Gloria Halstead isn’t ruffled. She gives the vegetable beef soup another stir and eyes the neat stacks of Styrofoam cups. She follows the same routine that her mother, Jane, did 40 years ago, when the ladies of First United Methodist Church first set up Parson’s Table to provide lunch for High Point Market visitors, hoping to raise extra cash for good works. That was 1978, the same year HGTV stars the “Property Brothers” were born, and long before showrooms at the international furniture market began hiring their own chefs to lure patrons to stay a little longer and spend a little more. That was back when people would come from around the country to buy furniture, but leave when their stomachs started rumbling for lunch.

A lot has changed in four decades. Today, High Point outdoes itself by hosting the largest international home furnishings trade show in the world. Online planning tools, an app, and travel concierge services assist the 75,000 attendees who pour into the small city for the semiannual occasion. Shuttles crisscross eight neighborhoods, ferrying buyers and designers among 180 buildings with 12 million square feet of exhibit space. There are pop-up events, celebrity sightings, and seminars. There’s a furniture fellowship prayer breakfast. Canapés and cocktails. There’s a hashtag.

Parson’s Table has become a well-oiled machine, comforting in its predictability.

With some 400 meals served on the busiest market days, the pace is always hectic. But it’s a special time for these women, too. Some of them have worked together since the inaugural Parson’s Table, when the owner of Council Craft Furniture guaranteed the First United Methodist Women’s Group that if they could make 50 lunches, 50 folks would show up to buy them. For the volunteers, it’s a time not just for food but also for fellowship. “This is kind of a uniting thing within our church,” says Harris, the former chair of Parson’s Table. “We have three worship services, and if you go to one, you don’t see the people who go to the other two.” The lunch shift gives everyone a chance to catch up, she adds. “There’s a lot of camaraderie, a lot of laughter.” 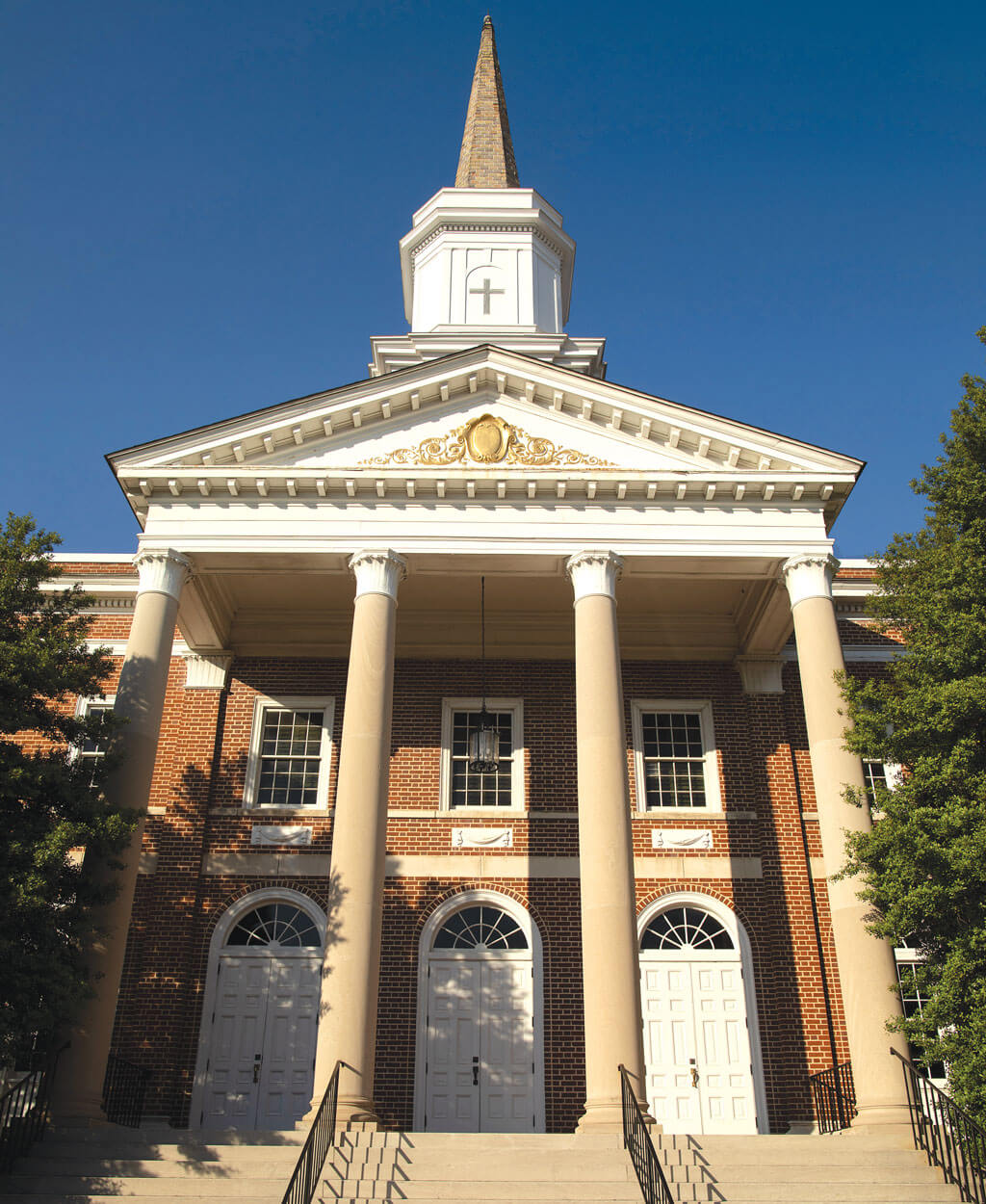 First United Methodist Church in High Point looks quiet, but in the basement, the lunch rush is in full swing. photograph by Jerry Wolford & Scott Muthersbaugh

A group that’s been cooking together this long is bound to have inside jokes and stories that cycle through the kitchen chatter year after year. Betty Cadick’s mother-in-law, for instance, was famous for an outrageous set of false teeth she carried around in a pouch.

“They were ugly, weren’t they?” Cadick says. She still has them in a drawer at home — even puts them on sometimes for a laugh. “I wore them to church one time!” she says. The ladies throw their heads back and cackle. Cadick was a Parson’s Table co-chair for nine or 10 years — she can’t remember exactly; the time blurs. There was the year all the salad ladies wore visors bedecked with ladybugs. There was the year the old church ceiling fell down and volunteers had to scramble to set up tables where people could eat without a chunk of plaster landing on their plates. There was the time Cadick’s Sunday school class used the broken sink to rinse out the salad dressing, and, well, the maintenance director had to re-mop the floors after that one.

“My mother had a real passion for this work. She’s the reason I’m here.”

But with so many women — and some men, too — volunteering over the decades, Parson’s Table has become a well-oiled machine, comforting in its predictability, even as it continues to grow and everything around it changes. The group now offers delivery service and a pop-up tent right in the heart of the market. And its members are not above tweaking their offerings to meet a need: Once, when a British gentleman requested hot tea, they brought in a kettle, even though he was the only customer to ask for it. “We try to please,” Harris says. When someone complained that the chicken salad was bland, Tuttle made batch after batch until she came up with a boost. “We used the same recipe for 20 years; it was probably time,” she admits.

Halstead stopped adding extra salt to the vegetable beef soup, but she does add a full stick of butter to the white chicken chili. “Julia Child says fat tastes good, and I agree,” she says, her blue eyes smiling. Those are the only changes she’s made, though. She still lines up the pots exactly as her mom once did, back when Halstead worked as an attorney in Washington, D.C., but drove down to help her mother pull off Parson’s Table. “She taught me everything I know,” Halstead says.

Her mother, Jane, who died in 2014, would have been proud of the $20,000 that Parson’s Table raised last year for causes including a women’s shelter, an addiction recovery village, child development programs, and a community health clinic. “My mother had a real passion for this,” says Halstead, who moved to North Carolina to help care for her mom. “She’s the reason I’m here.” So even though Halstead herself is not a member of the church, she takes her mother’s place in the soup section twice a year, serving up steaming bowls of old favorites next to the women who sang hymns and swapped recipes with her mom.

The lunch crowd has reached its peak, and a din is rising from the basement. A line forms in front of the dessert table laden with home-baked cakes — pistachio, banana, red velvet, coconut, strawberry, carrot, chocolate — as diners make their way to pay. Indecision slows their pace. At a nearby table, Shelba Cornelison takes dainty spoonfuls of vegetable beef soup, showing remarkable restraint around her slice of pig pickin’ cake, plump with mandarin oranges and pineapple pieces. The U.S. advertising manager for Bridge for Design, an international resource for interior designers, Cornelison has covered every market since she graduated from high school. “It’s fabulous. I wouldn’t miss it for anything,” she says.

Ann Smith works at the police department and doubles as a registrar at the market. Like many locals, she heard about Parson’s Table through word of mouth and keeps coming back. “It’s a great hideaway,” she says over a bowl of chili. “It’s the best-kept secret.”

Carolyn and Charles Riddle come by for sandwiches after finishing their morning shifts driving the shuttle buses around the market. Both are members of First United Methodist, and Carolyn used to volunteer with Parson’s Table. She knows all the ladies — and how much work it takes to keep this tradition going — and she feels right at home sipping sweet tea at the simple folding tables. Halstead pops over to say hello and to thank the Riddles for supporting Parson’s Table. They chat about this year’s market and markets past. Halstead heads back to her soups. Riddle smiles as she watches her walk away and says, “She looks just like her mother.”