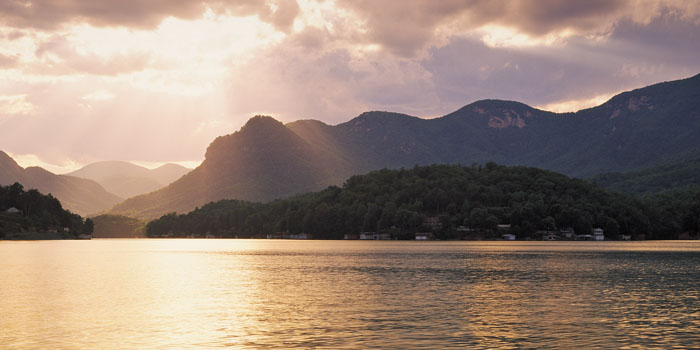 It never fails — they stand in amazement. That’s what Horst Brunner says happens every time one of his guests takes in the view atop the boathouse at The Lodge on Lake Lure. While the views of the lake from The Lodge are charming, everything opens up on top of the boathouse, making you feel as if you’ve landed in the middle of a storybook.

Today, however, part of the view is missing, as the mountains opted to take a nap under a thick blanket of fog. To an eye less trained than Brunner’s, though, the beauty of Lake Lure still shines through, with its placid, blue-green water ringed with boathouses of all shapes and sizes — one even has a rainbow painted on it.

In the newly refurbished dining room of The Lodge, an elegant, large photograph showcasing the disguised view hangs on the wall as further proof that this spectacular scene truly does exist. A construction worker snapped the photo while working on The Lodge’s recent update. The tall, stone-brushed mountains standing guard over the lake in the photo seem too magnificent to be real, but Brunner insists the shot was taken from The Lodge.

Built in the 1930s in memory of Patrolman George C. Penn, who was killed in the line of duty, The Lodge sits on a steep, wooded lot on the banks of the lake. With its wormy chestnut walls and granite millstone chimney, The Lodge evokes a timeless retreat atmosphere that makes you want to sit and read Thoreau all afternoon.

Brunner and his wife, Rebecca Bellin-Sonnenburg, have been owner representatives of The Lodge for nearly 12 years. During the recent update, they added nonintrusive, modern touches, such as wireless Internet and iPod stations. In the dining room, a revamped menu now offers more contemporary cuisine using local ingredients, such as meat from Apple Brandy Beef in nearby Wilkes County.

Last summer, truffled grits became popular. “To put truffle oil into grits, I mean, it’s a bit of genius, and it’s daring when you play with it like that. But I tell you, once you’ve tasted it, you won’t want to have grits any other way anymore,” Brunner says in his thick yet playful German accent. “And I hated grits before.”

Brunner began vacationing at Lake Lure in 1980, so he knows that conversion and change aren’t frequent here, and that’s fine by him. As someone who’s lived all over the world during his corporate finance career, he appreciates the simplicity this small Rutherford County town offers. Talk to the other 1,200 or so residents who live here year-round, and you’ll discover that they feel the same way. And who can blame them? Not many places can be quaint and spectacular all at once, but Lake Lure pulls it off.

With curvy roads outlining 21 miles of shoreline like tousled ribbon, and with statuesque mountains posturing regally above its serene waters, Lake Lure lives up to its name. Moreover, all of the town’s 13¼ square miles lie in what’s known as the thermal belt, meaning the area has an unusually temperate climate for the mountains. Lake Lure exudes a magnetic property that attracts a variety of folks like Brunner and rarely, if ever, lets them go.

The fog still refuses to lift, but that doesn’t stop Jim Proctor and his friends Edith and David Bond from going on an afternoon boat ride. A native of Lake Lure, Proctor has lived most of his life here. He resides on a property called Pine Gables, which his great-great-great-grandfather Judge George Washington Logan purchased in 1866.

Proctor is a real estate agent in town, but his connection is deeper than selling property. He was Lake Lure’s mayor for 10 years and even went on “Good Morning America” in 2007 to tout the town’s beauty.

“A lot of folks figure out what they’re good at and then go to where they can do it,” the 54-year-old says. “Well, at a very early age I figured out where I wanted to be, and I figured out how I could stay. You know, somebody with an intercultural studies degree didn’t get that to live at Lake Lure, but that’s where I am.”

The Bonds, meanwhile, moved to Lake Lure 35 years ago. David was born in nearby Bat Cave in 1952 and was delivered by his father, Dr. George Bond, who served as the town doctor for a decade. Edith is originally from Granville County.

As they ride across the silvery water that’s just a couple of shades darker than the overcast sky, they immediately turn their attention to a loon swimming in the middle of the lake, completely undeterred by the gloomy weather. Although sights like this are common here, that doesn’t make them any less exciting.

A few minutes later, David Bond points to the island where the lake’s yacht club was supposed to be. While that might sound strange, considering that only pontoons no longer than 28 feet are allowed on the lake, the initial plans for Lake Lure included an aviation field, two polo fields, a casino, a zoo, and that yacht club.

As you take in all of the natural beauty of Lake Lure’s environment, it’s easy to forget its existence is very intentional. A man-made vision brought it to life in 1926. A quarter-century earlier, a Missouri native named Dr. Lucius Morse came to western North Carolina hoping its mild climate would ease the effects of his tuberculosis. Immediately, he saw the promise of this pristine land, so he began purchasing parcels of it with the financial help of his brothers. Looking down from Chimney Rock at the Rocky Broad River flowing through Hickory Nut Gorge, Morse envisioned a lake — not just any lake, but a resort.

The stock market crash in 1929 ended those plans, leaving Lake Lure with only three projects of the development complete — the Lake Lure Inn (now the Lake Lure Inn & Spa), the Arcade Building, and the lake itself. The Mediterranean architecture of both buildings gives a nod to the Lake District of Northern Italy, a place many of the affluent investors involved with the development had visited and wanted to recreate in western North Carolina.

Although the European intent comes through in these buildings and the town hall, which was built in a Mediterranean style in 1995, Lake Lure never became the rich-man’s playground it was intended to be. If it had turned out that way, people like Proctor and the Bonds might not have an almost spiritual connection to it.

For those who respect nature and make the conscious decision to simplify their lives, Lake Lure is the rich playground it was intended to be.

Karen Mosely flips through a magazine as she works the desk at the visitor center in downtown Lake Lure. The fog has slowed down what’s usually a busy place.

Karen, a 64-year-old who dresses with an artistic flair, knows just about everything there is to know about Lake Lure. She began vacationing here 45 years ago. She and her husband, Royce, officially moved to Lake Lure from Florida seven years ago. They live near the center in a red cabin her husband’s grandmother had built in 1956.

“The first insurance that’s ever been placed on the house, we purchased,” says Mosely, who volunteers at the visitor center a couple of times a month. “It sat here for that many years and no crime, no nothing.”

When the Moselys moved here full-time, they didn’t increase the size of their home; they just winterized it to make it comfortable for year-round living. “Everybody comes out on our sundeck, which overlooks the lake. The first thing they say is ‘wow,’” Mosely says. “Our house is not necessarily impressive compared to the ones like, say, in Rumbling Bald [a gated community on the north end of the lake], but the view is spectacular.”

The views around Lake Lure were part of what convinced the makers of Dirty Dancing to film much of the 1980s blockbuster here. In 2009, after the movie’s lead actor, Patrick Swayze, died, town officials started getting calls from people wondering what Lake Lure would do to honor him.

In typical Lake Lure fashion, the town put together a memorial service for the actor and, later, a festival. “We had people drive up from Georgia for this memorial,” says Edith Bond, who was an extra in the movie. “We were amazed that so many people were still so interested in this movie.”

The service took place at Firefly Cove, facing the water where Swayze lifted actress Jennifer Grey high into the air as they practiced dancing in the movie. Although it rained during the service, the beauty of the lake made up for the dismal weather — something it’s accustomed to doing.

The fog finally breaks. As the sun shines down on Lake Lure, the glimmers off the water look like diamonds that have been stored away for much too long. The mountains seem to stand even taller, knowing that they’re finally in plain sight. More boats drift into the water. More folks are out and about doing everyday things in an extraordinary setting.

A girl sits on the boardwalk downtown reading, while a mother and daughter practice spelling words in the picnic shelter at nearby Morse Park. A grandmother pushes her granddaughter on the swings at the playground, while a young couple chases their toddlers across the grass.

Up the road at The Lodge, Brunner and his guests soak in the glorious view from the boathouse. “The position of the boathouse is probably one of the prettiest on the whole lake,” he says. “To me and to Rebecca, it means total tranquility.”

Lori K. Tate is a freelance writer and editor who lives in Cornelius with her husband, John, and their 18-month-old twins, Graydon and Margot. Lori’s most recent story for Our State was “Window to the World” (July 2011).