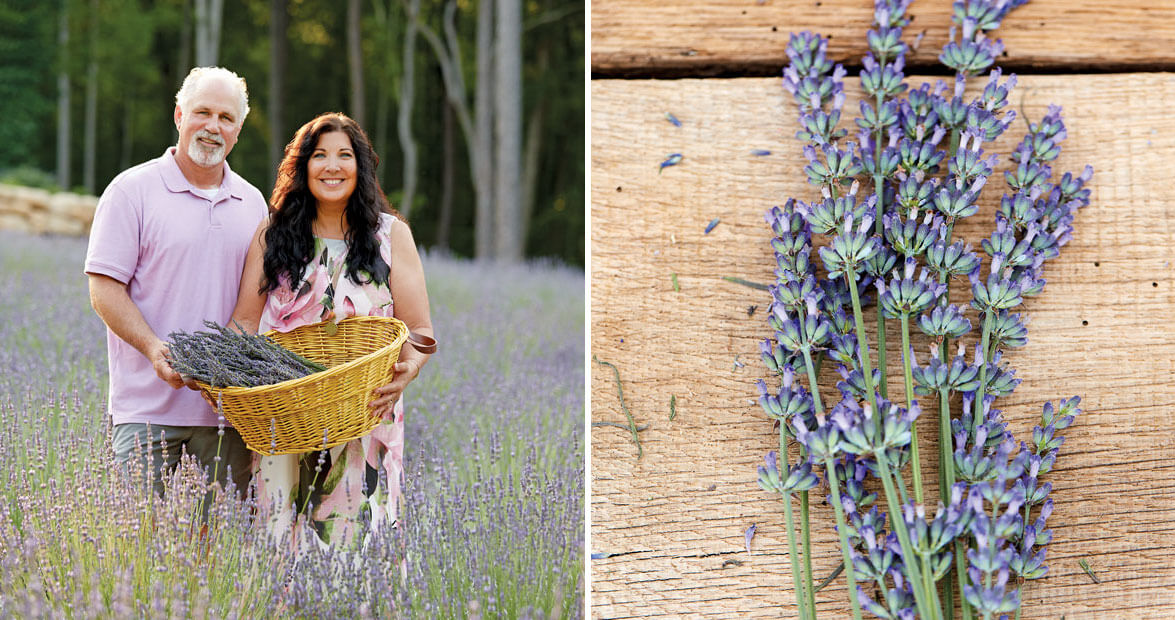 The first thing you notice about Lavender Oaks Farm is the scent – earthy and floral, intoxicating yet extremely soothing. It emanates from rows upon rows of deep purple, blue-gray, and white lavender bushes that brush the knees of visitors wandering in a happy stupor, lulled into a sense of calm by the aroma coming from the silvery-green leaves. Even the bees buzz lazily around the purple buds instead of dashing through in a pollinating frenzy.

“People stay out there for hours,” says Karen Macdonald, who owns the farm in Chapel Hill with her husband, Robert.

The children are the most captivated – little girls in pigtails and wide-eyed boys, standing not much taller than the lavender bushes themselves. One young girl visited the farm after expressing her desire to visit to Provence, France – a region famous for its abundant lavender fields. Her mother brought her to the next best place: Lavender Oaks.

“Seeing a child enjoy lavender,” Karen says, “that is the dream.”

Karen’s own visit to Provence during college tipped her off to the wonders of lavender for both body and spirit. Memories of the abundant fields and tranquil farmhouses stayed with her through the start of her career, the start of her family – she and Robert have three children – and eventually through a move in 1994 from California to North Carolina, where she and Robert started a business selling solar products.

“Seeing a child enjoy lavender, that is the dream.”

But after 22 years, they were beginning to think about their next steps. With memories of lavender fields in her head, Karen started researching to see if she and Robert could make a shared dream come true: one of running their own family farm, filled with lavender that their children and eventually grandchildren – they now have a 1-year-old grandson – could enjoy.

“We’re no spring chickens,” she says, “but it was important for us to build something for future generations.”

One night, over a dish of lavender chicken, Karen surprised Robert with her findings. The good news was that a farm could definitely happen. But it would take a lot of work.

Standing on their new property, looking out at the 42.5 acres of dense forest, Karen felt a shiver of fear. It was 2015, and the Macdonalds were getting ready to sell their house, sell their belongings, and leave their jobs. They had found the perfect place for their farm – but the land was completely forested. “There’s nothing scarier than selling everything and looking at a forest and thinking,There’s no going back,” Karen says.

The Macdonalds mostly had to learn how to grow lavender from trial and error. But with help from the Forest Service, a lavender farmer from Washington state, and local strawberry farms – who also grow plants in raised rows – the Macdonalds planted 4,000 lavender plants. They restored three timber-frame barns, each at least a century old. One became the Pavilion Barn, where visitors can relax in the shade. Another serves as a place to dry lavender, but can also be used for weddings and events. And the third became the farmhouse where they now live.

Karen called the making of the farm the “ibuprofen years” – at the end of every day, she and Robert would be filled with aches and pains. Eventually, though, the hard work paid off. Lavender Oaks Farm is now a peaceful haven where visitors can pick their own bunches of lavender from nine different varieties, depending on what’s in bloom – including Karen’s favorite, Violet Intrigue. The Farm Shoppe, located in the Lavender Barn, offers products that showcase the culinary and apothecary sides of lavender, including soaps, salves, spice rubs, and sachets. Karen also makes lavender lemonade and a vanilla cinnamon cake with lavender glaze – called the “Welcome Neighbor Cake” – from her mother’s recipe.

The plants, the lotions, and the food all come together as part of Karen’s desire to make a place where mindfulness and calm come easily. “Everybody has the need to take a moment and unplug,” she says.

Standing in a field of lavender, with purple blooms bobbing around your knees and that soothing scent in the air, you’ll find that unplugging is not so hard to do.