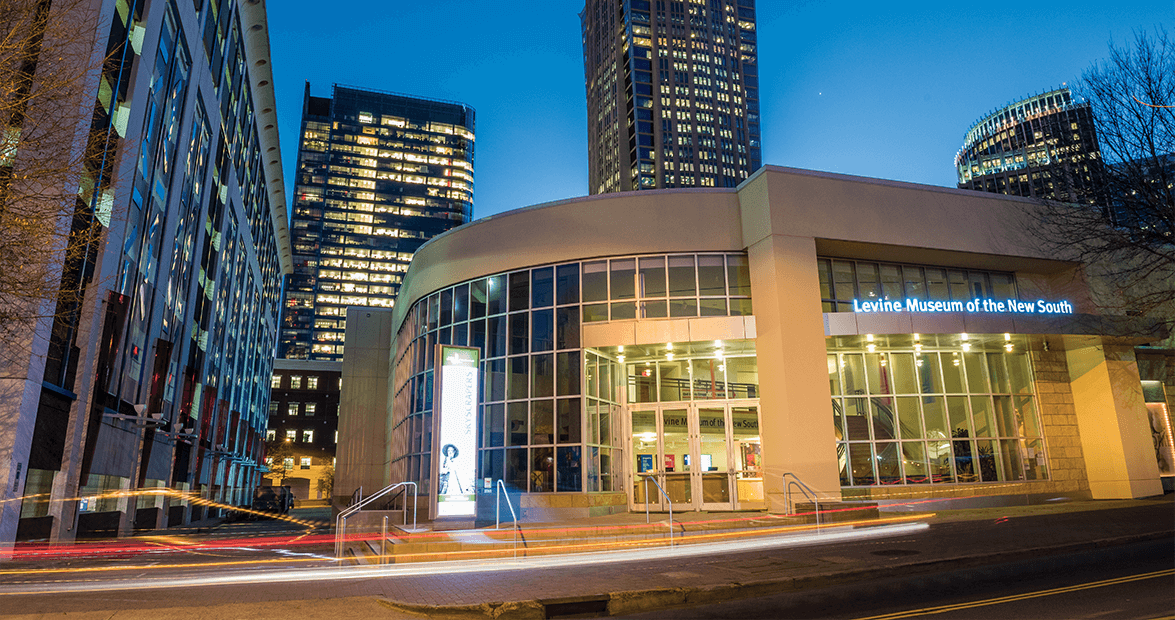 That’s the question everyone’s asking over a dinner of fried chicken, macaroni and cheese, and iced tea at the Levine Museum of the New South, where the goal is telling the story of the region’s past, and its future.

Everybody in Charlotte, it seems, is from everywhere but here. Someone has to make our new neighbors feel at home, or at least familiar with their adopted hometown — its history, people, and the major events that keep Charlotte and the South reinventing themselves. That’s where the Levine Museum comes in.

The mission of the museum’s “New South for the New Southerner” program is simple: to feed the curiosity of people who are new to North Carolina — and natives, too. There’s no shortage of historical references at the Levine, which chronicles the South’s rise from the ruins of the Civil War to today’s cultural and economic engine.

Tonight, longtime North Carolinians and recent transplants have gathered at the museum for a lesson on the political and social ascent of Charlotte women during the past 40 years.

Attendees of a certain age — those born after 1970 — are surprised to learn that newspapers used to publish gender-specific classified ads, and that women hadn’t been elected to public office or appeared on local TV newscasts until the ’70s. Yet here are Betty Chafin Rash and Beatrice Thompson, who broke gender barriers in politics and broadcasting, respectively, telling stories and reliving the days when women had fewer opportunities than men.

Standing among exhibits highlighting the Southern Christian Leadership Conference and Lebanese immigration in the region, Levine Museum historian Dr. Tom Hanchett poses a simple question: “From where did you move?”

“We’ve got India. Can anyone top that?”

“Get out your MapQuest,” Hanchett says. “It’s going to be close.”

From near and far, these new Southerners are adding fresh chapters to our region’s history. It’s OK not to know the backstory. There’s plenty of time to learn and move forward.

“This is a region that has been reinvented, reinvented, and reinvented,” Hanchett says. “That’s the story we tell at the Levine Museum. We want people to understand why we got here. Whether you’ve lived here or are the newest newcomer, you are shaping history today — but history also shapes you.”

A sip of the South

One of the most popular programs is a soda pop tasting, appropriate given North Carolina’s history with carbonated beverages. Hanchett introduces the history of North Carolina-born favorites Pepsi and Cheerwine, in addition to Mexican and Asian imports that have made their way into the South, each bringing a unique flavor to the local culture.

When the sipping commences, so, too, do the stories of a changing Charlotte. People talk to each other about their childhoods, their families, the homelands they left in search of a new life. Thirsts are quenched — both the physical kind, and curiosity about the place we now call home. It’s not necessarily what we’ve known, but we’ve gained an appreciation for where we are.

At each program’s end, the discussions continue. Transplanted New Yorkers and Ghanaians banter easily with folks from Gastonia and Concord. Cultural and historic divides dissolved a couple of hours ago. This is home, and we’ve learned valuable lessons about our place in it.