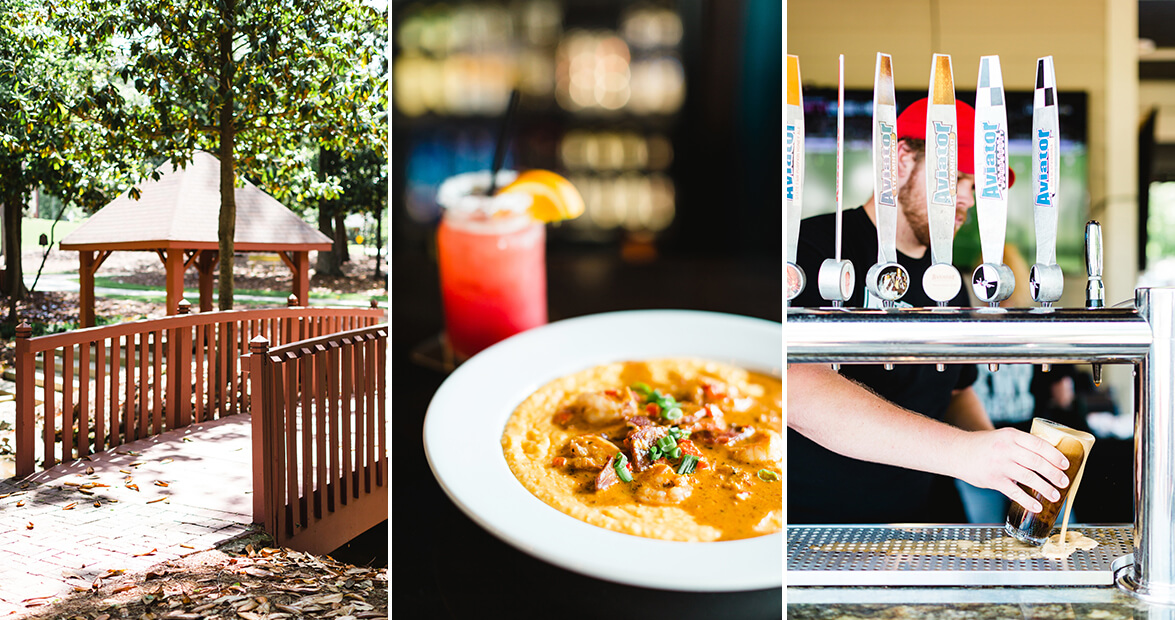 Fuel up with a cup — and grab a baguette to go

For some of the best sourdough east of San Francisco, head to Stick Boy Bread Company. Co-owner Katie Dies was one of the first employees of Stick Boy’s original location in Boone while she was a student at Appalachian State University. When she and her husband, Josh, moved to Fuquay-Varina, something pulled at the couple to create a true community gathering place that the town needed. “There wasn’t a whole lot happening on Main Street at that time, but we just thought what if?” she says. “What if it could be something fun and where people can bring their families?” They opened the bakery in 2008 in partnership with Mindy and Carson Coatney, who own the Boone location. The made-from-scratch sticky buns and cinnamon rolls quickly gained a devoted following among the Triangle crowd. “We’ve got a lot of regulars who we’ve been able to enjoy life with these last ten years, which is really neat,” Dies says.

When Fuquay Springs’ namesake, Stephen Fuquay, discovered a natural spring running through his farm in 1858, people came from all over to drink the water, which had a high mineral content and supposed healing powers. That spring still flows today at Fuquay Mineral Spring Park, a pleasant setting for an afternoon picnic or stroll. In Fuquay Springs’ heyday, a general store and hotels were built around the spring to accommodate visitors. Those no longer stand, but the park’s whimsical bridge and gazebo attract wedding parties and prom goers looking to capture the moment, making the park one of the most photographed spots in Wake County. Fuquay-Varina has sustained itself by creating a strong sense of community; in the late spring, enjoy one of several events happening around town, including WRAL Freedom Balloon Fest on Memorial Day weekend, which will feature hot air balloon competitions and plenty of live music.

Get your fill at The Mason Jar Tavern

From pickled peaches to lighting bugs, a Mason jar holds the important-but-little things close. A true Southern eatery that feeds both the stomach and the soul, The Mason Jar Tavern serves the same function as its namesake. Around here, the question isn’t “Is the glass half-full or half-empty?” Instead, it’s “Can I top that off with a splash of sweet tea for you?” The buzzy dining room brims with energy, where status and stature mean little to the lunch and dinner crowds. Everybody fits in. “There are many times in my restaurant that I’m waiting to seat a table because they’re talking to their neighbor or someone they know,” manager Jaime Adams says. There’s plenty to eat, too. Chicken ‘n’ waffles. Shrimp ‘n’ grits, Mac ‘n’ cheese. The menu reads as smoothly as syrup. And let’s talk about the syrup on those chicken ‘n’ waffles for a minute: It’s the real stuff — maple — infused with a bit of bourbon and serves as a perfect partner to the homemade honey butter. Bring your meal full circle with an order of blood orange sangria or carrot cake, appropriately served in, what else, Mason jars.

In Fuquay-Varina, where the sidewalks are meant for strolling, picturesque storefronts of historic buildings beckon. The Shoppes on Main is home to an eclectic mix of boutiques selling everything from birdfeeders to blouses in cheery colors. If you’ve ever wanted to learn what it takes to sport seersucker, Ashworth’s Clothing & Shoes will show you how. Dressing Southern gentlemen since 1937, Ashworth’s is an emporium of ties and Harris Tweed that can fulfill all of your Derby dreams short of helping you pick the winning horse. Farther down on Main Street, Mad Hatter is a small shop with a big personality and even bigger one-of-a-kind hats. Make sure to pick up a bag of loose-leaf tea to throw yourself an un-birthday party that would make Lewis Carroll proud. On the Varina side of town, get some help beautifying your home with the help of SUR Furniture, which sells timeless salvaged furniture, and Flowers on Broad Street, a florist with lush arrangements and décor.

It seems that no North Carolina town is too small for a brewery. In Fuquay-Varina, two breweries offer different experiences and capture the ethos of their respective sides of town. Fuquay’s Fainting Goat Brewing Company offers a laid-back coffeehouse atmosphere where it’s not uncommon to see two strangers strike up a conversation. “We don’t show the game. We don’t give out the WiFi password,” says co-owner Tim Reichert, who started brewing at home after he retired from the military. “We want people to have a good time and make new friends.” The Fainting Goat opened in 2015 and features a lineup of core beers, including the popular Horny Honey Wildflower Witbier and What the Buck American Pale Ale, in addition to rotating taps. The brewery showcases a new 31-gallon small batch brew during the first weekend of every month. On the Varina side of town, Aviator Brewing Company is a powerhouse that boasts a fully operational brewery, taphouse, beer shop, and barbecue joint. Soon a distilling company and brick-oven pizza will join the ranks. Aviator has seen a lot of growth since owner Mark Doble started brewing beer inside the hangar where he was storing the plane that he had built himself. On a warm day, sip a HogWild IPA or MadBeach Wheat on the porch of the Aviator TapHouse. If you wish to sample beers from across the state, head over to The Mill, a bright gathering place that doubles as a wine and espresso bar.