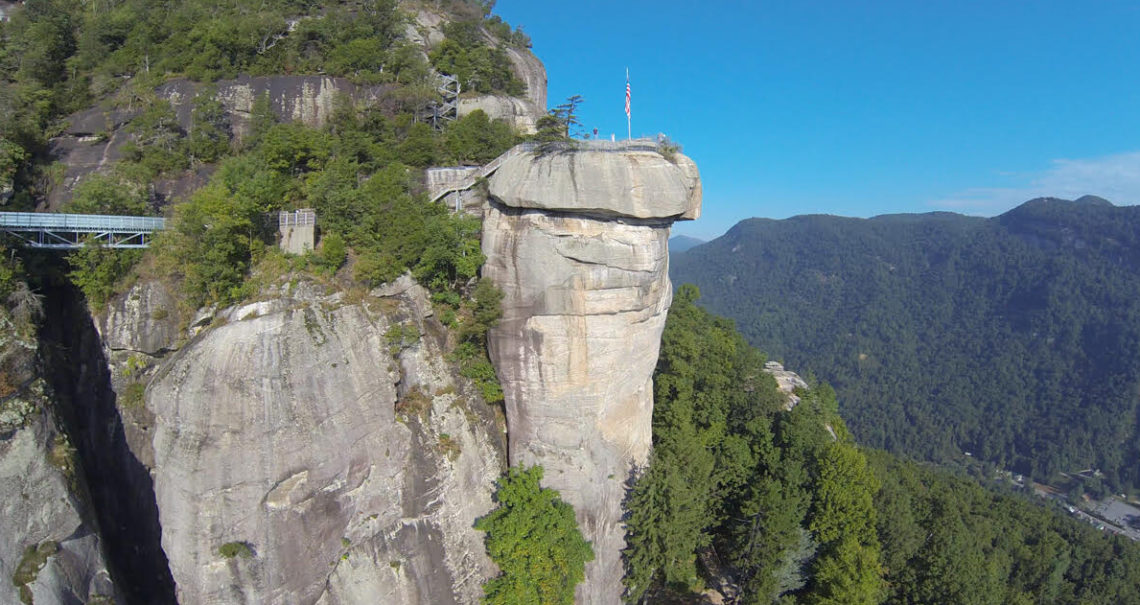 Birds wise enough to settle in the cliffs of Chimney Rock State Park seem to have it all figured out. With their nests thousands of feet above the Hickory Nut Gorge, dark-eyed junco and common raven trill and caw, swoop and glide. A pair of peregrine falcons nose-dives up to 200 miles per hour down toward the deciduous forest below, where scarlet tanagers, warblers, and vireos put on a show for delighted birders.

One can only imagine that feeling of slicing through fresh mountain air over a blanket of treetops, but at Chimney Rock, it feels possible. And you don’t even have to work for it as the birds do — if you don’t want to. “Visitors can choose their route to the top,” explains Emily Walker, the park’s director. “You can take a 26-story elevator ride through the mountain or take a scenic climb up about 500 stairs.”

Either way, park visitors find themselves on top of one of western North Carolina’s most iconic rock formations, astounded by 75-mile panoramic views. “One of the aspects that makes this view so breathtaking is you’re looking over the Blue Ridge Escarpment, where these mountains appear to make an abrupt drop into the Piedmont,” Walker says.

Some people say the sky’s the limit. At Chimney Rock, we mean it. 1,000 acres of rambunctious beauty: amazing views, six unique hiking trails, a breathtaking waterfall, and more. The best of the mountains in one place. 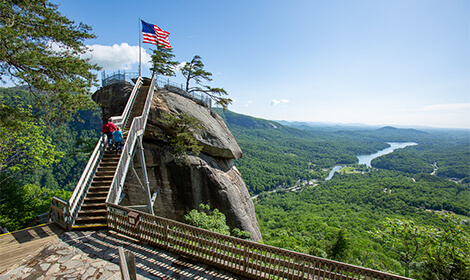 When 32-year-old physician Lucius Morse first witnessed the rugged monolith now dubbed Chimney Rock, he was in the area following a tuberculosis diagnosis. It was 1902, and the Missourian was in search of clean, mountain air and natural trails to explore. “Many people came to this area to seek healing,” Walker says.

Falling in love with the chimney and cliffs surrounding Hickory Nut Gorge, Morse shared his dream with his older twin brothers, and the three purchased the land. Their vision: to dam the Rocky Broad River and make the area a destination. 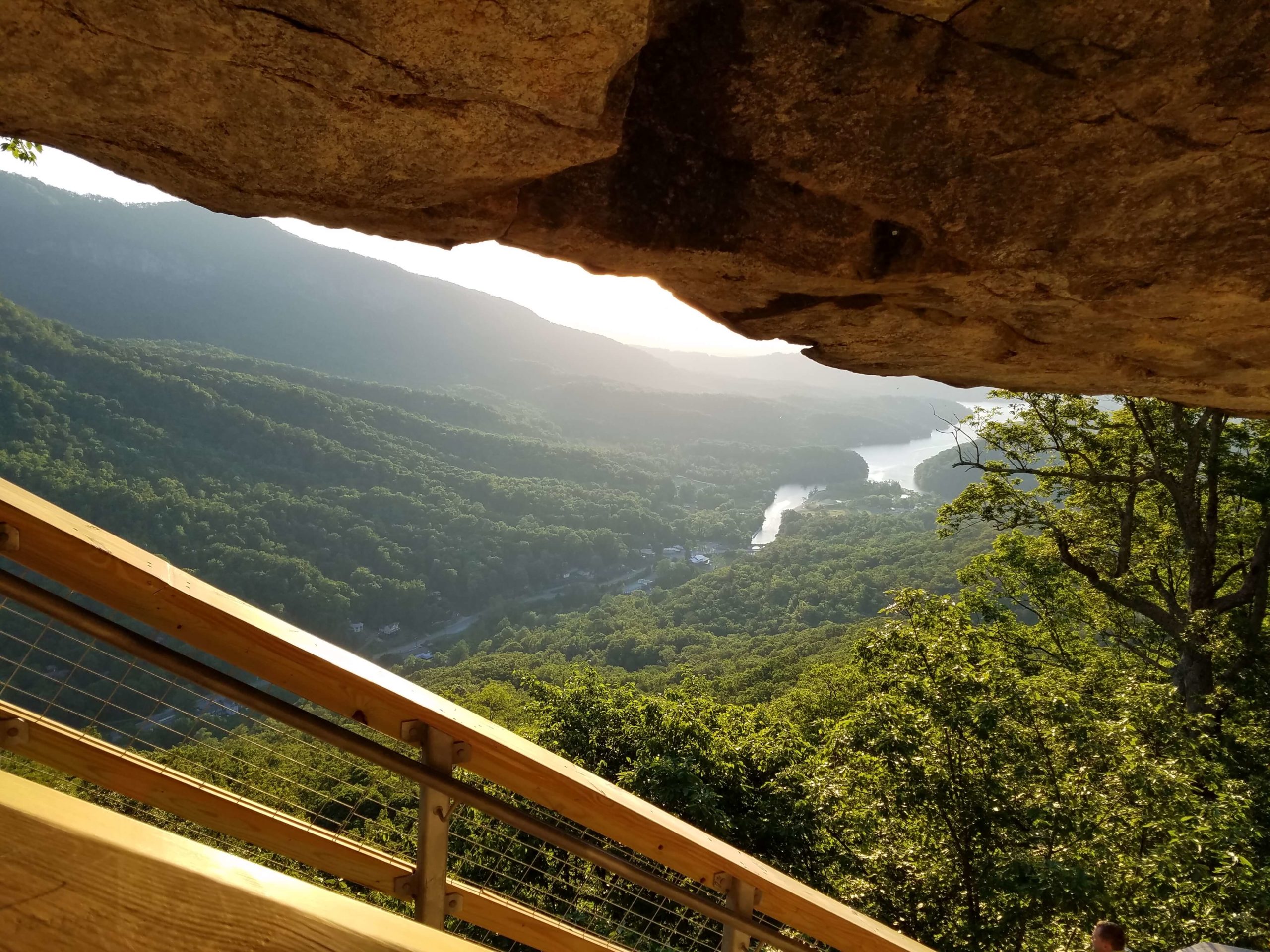 From the top of Chimney Rock, the sight of the beautiful 720-acre Lake Lure and its surrounding development reveal the brothers’ success. “There’s an annual Dirty Dancing Festival, sometimes you can faintly hear the hit songs playing all the way up in the Park,” Walker says.

Each year, more than a quarter million visitors come to Chimney Rock State Park to take it all in. According to Walker, the Morse family was instrumental in making Chimney Rock accessible to all: They built a road that snaked all the way to the chimney, accommodating cars that, at the time, couldn’t travel up more than an eight-percent grade. And an elevator, which opened in 1949, to this day transports visitors up 26 stories in just 32 seconds.

When the state of North Carolina bought the park in 2007, they made enhancements to the trails, including the main Outcroppings Trail, affectionately referred to as the “Ultimate Stairmaster.” The 494-step stairway was built over two winters with the help of a helicopter flying in and setting steel beams. “It was quite an undertaking and so incredible to watch,” Walker says. 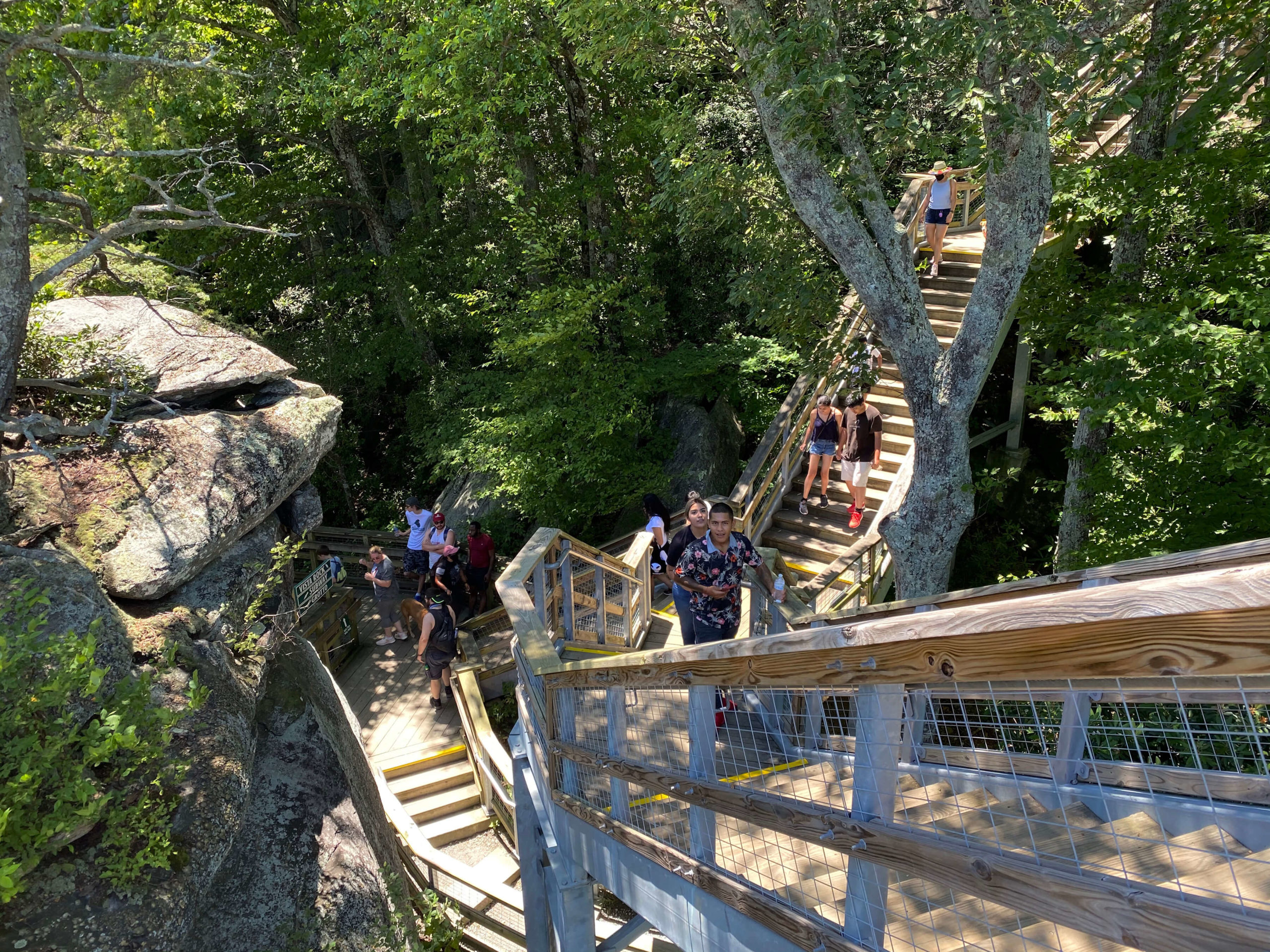 The Outcroppings Trail features nearly 500 stairs — but the view is well worth it. photograph by Chimney Rock Park

The new stairs have the added perk of giving hikers an excuse to make frequent stops along the way. Each resting point offers unique glimpses into the park: At the kid-favorite “Subway,” adventure-seekers scuttle through a short tunnel as they ascend the mountain surrounded on all sides by the Henderson Gneiss metamorphic rock that makes up Chimney Rock. “Only in the Southern Appalachian Mountains can you find this type of rock, which makes the Outcroppings Trail an even more unique route to follow,” Walker says.

The aptly named Pulpit Rock overlook comes next: This is the best place for peregrine spotting and offers sweeping views of Hickory Nut Gorge.

A grand American flag signals your arrival to the rock, the park’s trophy lookout. Take a moment to soak up the view, your reward for conquering the “Stairmaster.” Each season brings its own treasures, from spring’s delicate wildflowers to winter’s undulating slopes and natural rock outcroppings. 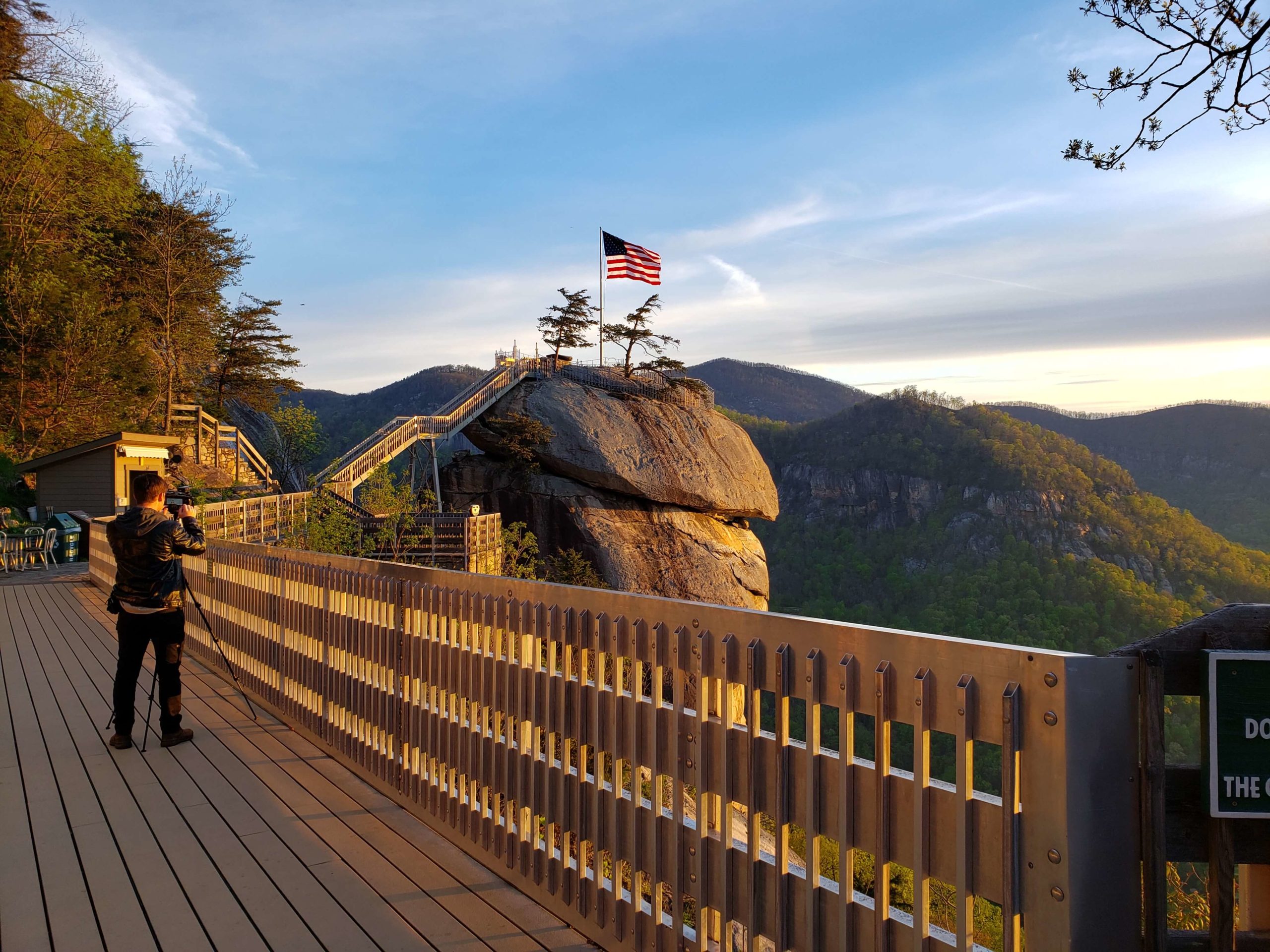 The bridge at the top is the perfect place to snap a picture of the flag on the Chimney. photograph by Chimney Rock Park

In total, six unique hiking trails delight and challenge visitors. You even have the option of ditching your car soon after you enter the park and hiking the Four Seasons Trail up to the base of Chimney Rock. At just .7 miles, the trail climbs almost 400 feet through a rich cove forest and meets the Hickory Nut Falls trail.

Whether you opt to climb Chimney Rock’s 494 steps up the Outcroppings trail or take the elevator, once you reach the chimney level, you can see the stairs across from the Rock that lead you up Exclamation Point Trail, which will wind its way up to Exclamation Point itself, with an elevation of 2,480 feet and a full view of the gorge. 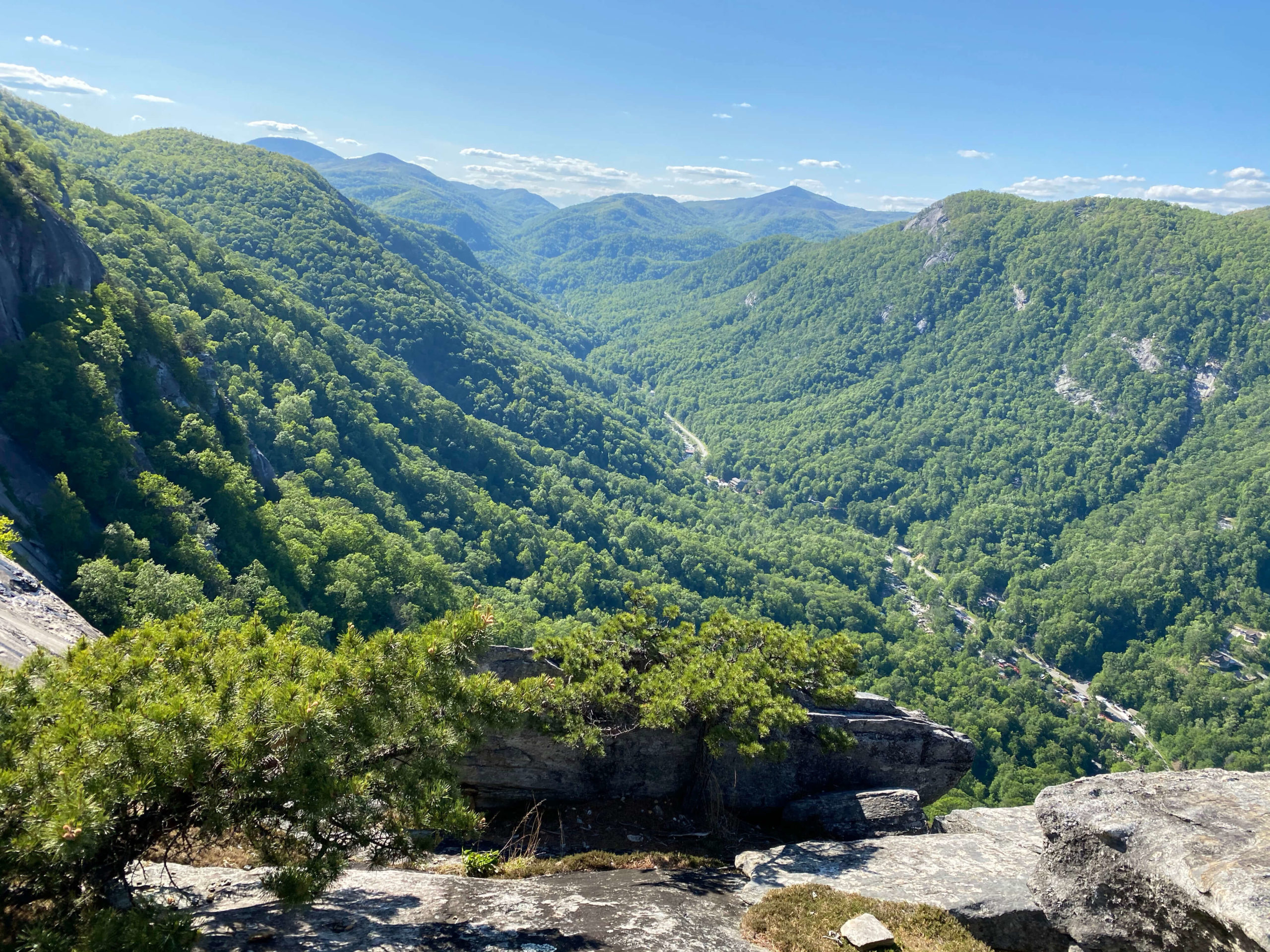 From there, another trail awaits. The clifftop Skyline Trail runs a little over a mile atop the ridge of the chimney and includes Peregrine’s Point, the chimney’s highest accessible viewpoint. There are a few uphill sections of the Skyline Trail: The path is wide, but it’s a moderately strenuous walk that rewards hikers with grand views and an opportunity to see the headwaters of Hickory Nut Falls.

Walker explains that three springs feed Falls Creek, which forms Hickory Nut Falls, the tallest waterfall in a North Carolina state park and one of the tallest east of the Mississippi. “The flow of the falls can fluctuate a bit based on recent rain amounts throughout the year, but if you happen to visit after a big rain, you’re in for a treat,” she says.

Shaded by deep forest, the 1.4-mile, round-trip hike to the base of Hickory Nut Falls — featured in The Last of the Mohicans — is the perfect way to cap off your trip to Chimney Rock State Park. Along the way, enveloped by native rhododendron and mountain laurels, keep your eyes peeled for scurrying fence lizards that share your path. 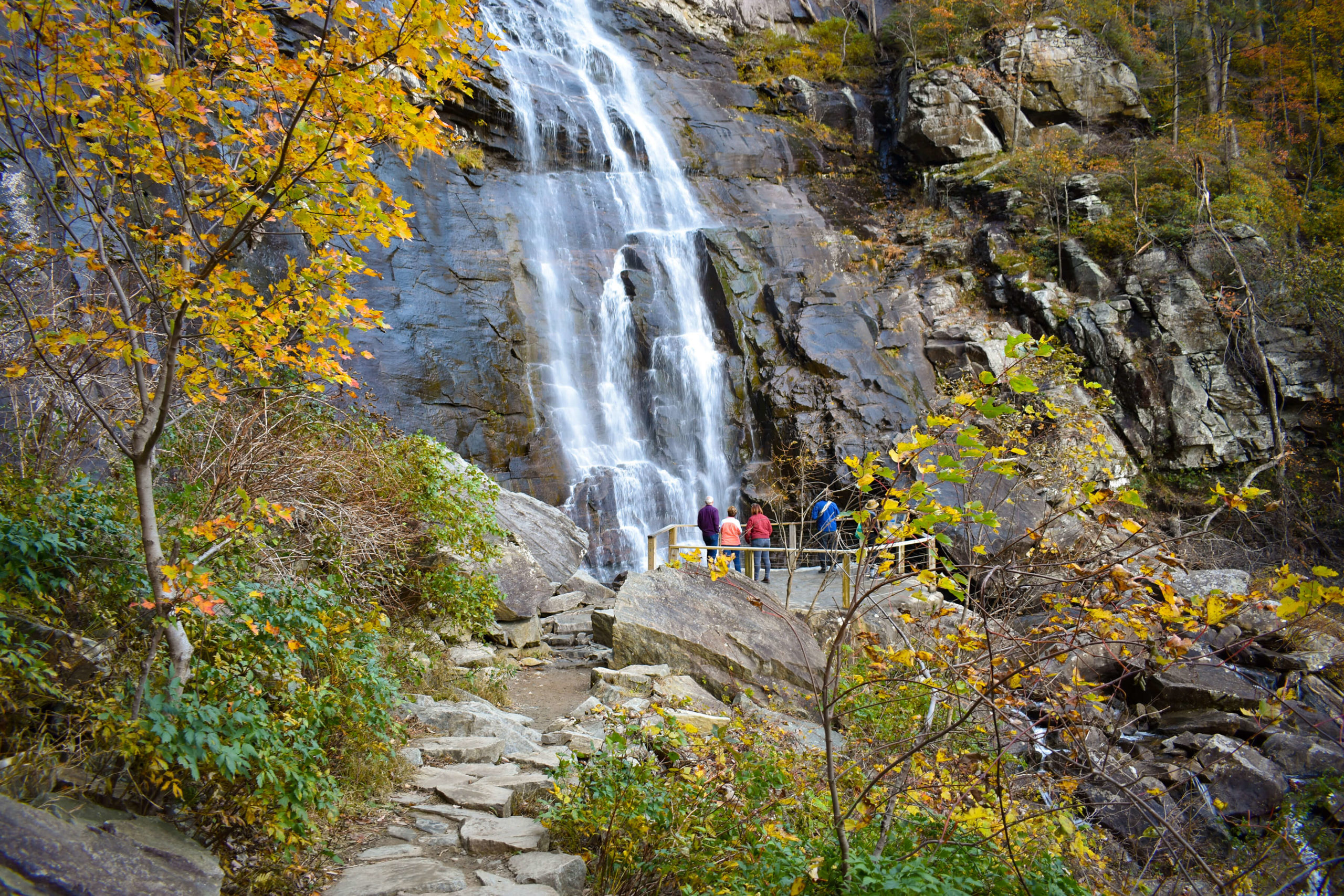 Need to cool off after climbing to the top of Chimney Rock? Stand at the bottom of Hickory Nut Falls photograph by Chimney Rock Park

Rounding the final bend, you’ll know you’ve arrived at the grand finale before you see the falls. Mist cools the air, tiny periwinkle-blue butterflies flit through the canopy, and the giddy sounds of hikers who’ve just happened upon a natural wonder give away the same conclusion Lucius Morse came to long ago: From top to bottom, Chimney Rock is good for the soul.