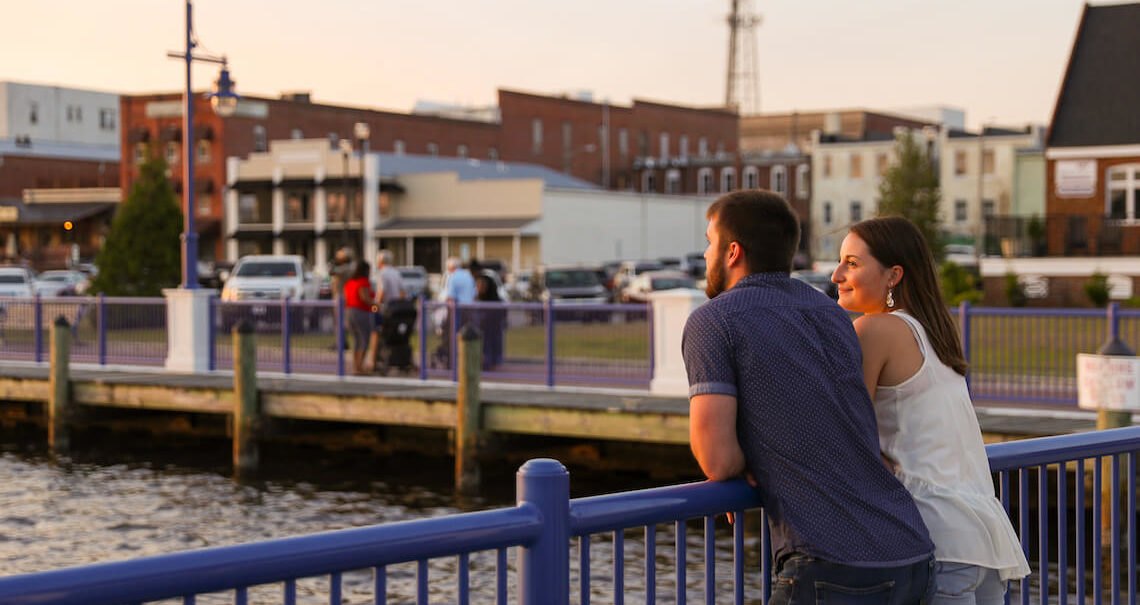 When Liane Harsh goes on vacation, she looks for places like her own shop. “It’s relaxing and happy,” she says about Inner Banks Outfitters’ perch on the east end of Little Washington’s historic waterfront. A warm breeze drifts in from the Pamlico River, and her colorful kayaks and paddleboards rock gently, inviting folks to hop in or climb on. It’s all just a stone’s throw from Backwater Jacks, a local hangout known for its unbeatable burgers. Harsh calls this small strip of a small town “the fun zone.”

Consider Washington Eastern North Carolina’s most beautiful little secret. With diverse shops and restaurants, rich history, a thriving arts scene, and the natural beauty of the Pamlico River, you are sure to find the ideal Washington-area experience suited just to you. 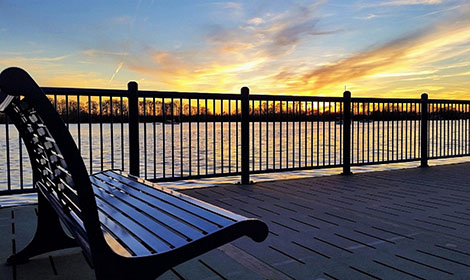 Visitors lucky enough to land in Little Washington for a weekend learn right away that fun stretches to every corner of this charming eastern North Carolina town. Read on for some of our favorite ways to take advantage of river life and small-town hospitality.

As park ranger and head of Interpretation and Education, Nick Botello knows the secrets of Goose Creek State Park. Like if you listen carefully, you can hear the pileated woodpecker species that sounds a lot like a laughing monkey. Or if you hike past the popular cypress-shaded Palmetto Boardwalk and down the Tar-Kiln Trail for a little over a mile over to Mallard Creek, there’s a quiet, hidden pier — your best bet for reeling in a freshwater bass. 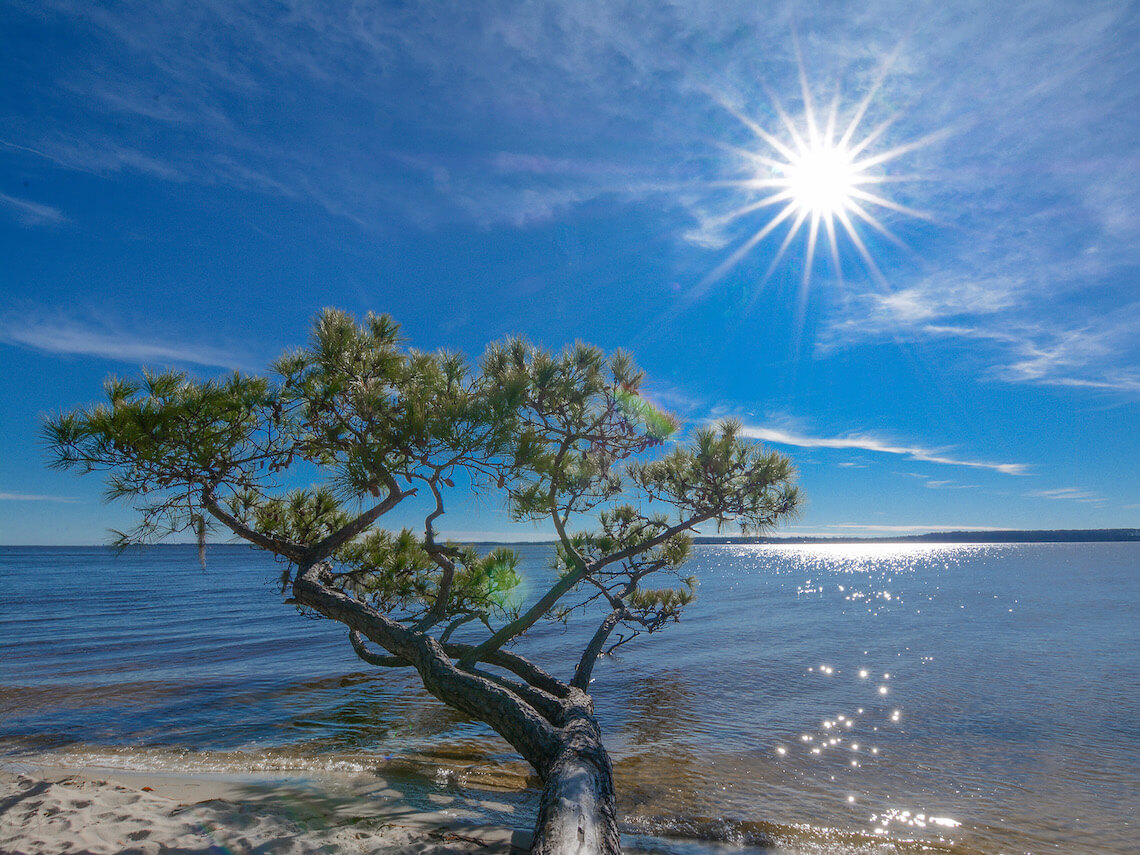 “The Palmetto trail crosses over swampland that is now becoming a marsh because of hurricanes that have pushed into the fresh water,” Botello says. “It’s an interesting transition if you know what to watch for. If you see trees, it’s a swamp, and you might see box turtles, beavers, and even river otters. The areas with tall grasses are marshland.”

After a morning of hiking and fishing — bring the whole family; the park is dog-friendly — cool off in the protected areas of the swim-beach, and then spread your towel to soak up the sunshine on the sandy shore.

Paddle over to Castle Island

From kayaks to bikes, there are lots of possibilities for outdoor recreational rentals at River Vibes on South Market Street. But why pass up the opportunity to take off on a paddle boat? How else can your family of four pile into a boat and end up, just 15 minutes later, on an island complete with swimming, sunning, sandcastle building, and endless picnic spots? “We even have a dog life jacket!” says owner Jennifer Schmitt, who opened River Vibes with her family earlier this year.

After you return from your Castle Island adventure, celebrate your paddling success with a Castle Island smoothie, made from fresh peaches, pears, and apricots. “Smoothies are our specialty,” Schmitt says.

Learning to sail is all about harvesting the wind. And with a little “time on the tiller,” anybody can be a better sailor, says Kevin Clancy, who runs the Little Washington Sailing School on the Pamlico River. For adults in town for the weekend, he offers morning sessions: For $25 per hour, you can join a trained instructor aboard the 14-foot Vanguard 420, a collegiate racing boat, and learn the basics of wind direction and how to steer with a tiller.

Sailing through the harbor with his students, Clancy likes to point out Little Washington’s historical treasures. “Before the U.S. was even built, this was a center of commerce,” he says. “One of my favorite things is the cannonball house, where you can still see the cannonball stuck in the house on the waterfront from when the Union brigade sailed up the Pamlico River and occupied Washington.”

At Inner Banks Outfitters, zen-seekers of all levels are up and at ’em for the 8 a.m. stand-up paddle board yoga class. “You get the benefits of paddling, stretching, and yoga all in one because you’re on the water, which adds a whole new balancing element,” Harsh says. “Being out on the water is the great equalizer for yoga. When you’re on a paddleboard, nobody is good at it!”

In addition to paddle boards, Inner Banks offers kayak, golf cart, and bike rentals, so if an hour on the water makes you hungry for more, hop in a kayak and take off into the protected waters of Runyan Creek for turtle and bird sightings. Or paddle toward the harbor district: “When you’re out on the water looking at Washington, it’s an adorable town,” Harsh says. 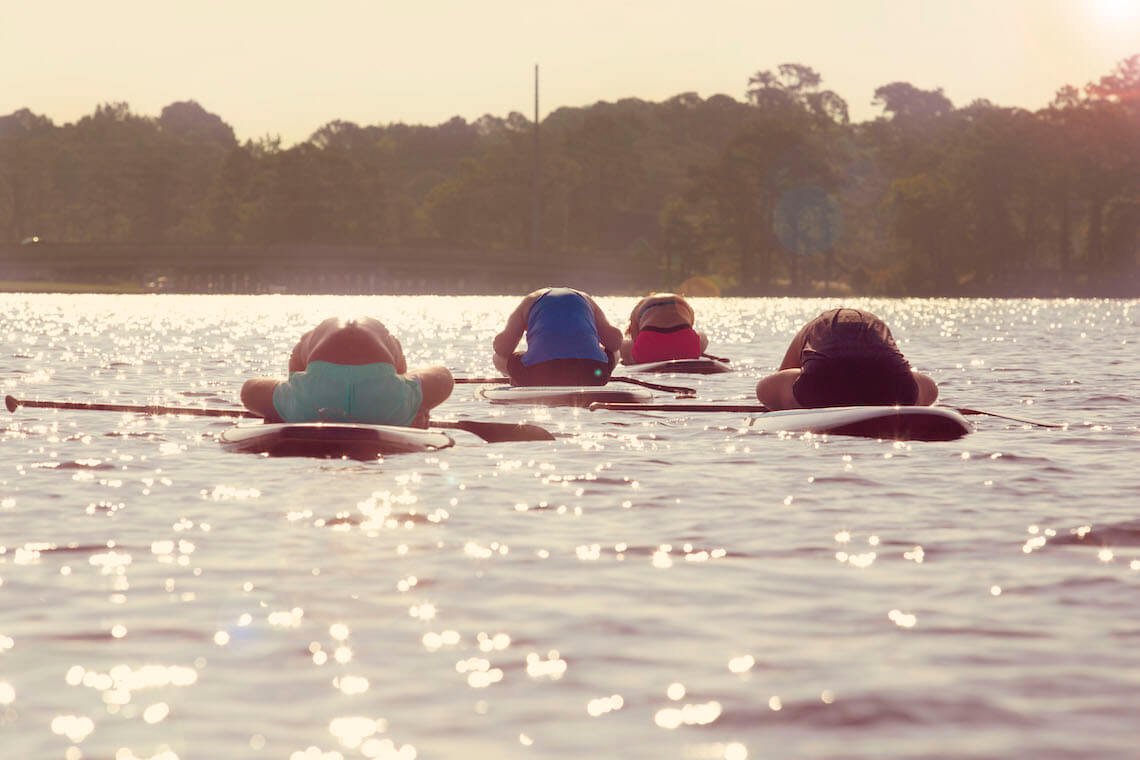 Yoga on the river. photograph by Christina Hinrichs

On two wheels, you can bike downtown and through the historic Washington Park neighborhood. “You can totally do Washington on a bike,” she says. “The small roads almost seem like sidewalks. Our goal is to be a full-service rental. We’ll do the work so you can come out and play.”

Whether by land or water, Harsh suggests ending up at Backwater Jack’s tiki bar. For the ultimate treat, she orders a basket of fried oysters. “It’s the greatest; they’re lightly breaded and perfectly fried, and with lots of outdoor seating, you can always get a spot with a good view of the river.”

Roll on the river with a River Roving Boat Tour

On Wednesdays through Fridays at 10:30 a.m., the River Roving pontoon boat takes off from the North Carolina Estuarium, six passengers listening intently as the captain gives them a behind-the-scenes tour of the Tar-Pamlico River. “Yes, it’s one river with two names,” says Estuarium Director Tom Stroud. “There are different theories out there, but nobody has a real clear understanding of why.”

After passing Castle Island — once home to an alleged early-1900s brothel, Stroud reveals — the captain heads up Bear Creek and points out a couple of bald eagle nests in the woods. “We’ll usually see osprey, great blue herons, and occasionally dolphins,” he says.

The tours run about an hour and a half, and while there’s no charge, reservations are required. Don’t leave before wandering through the world’s first estuarium, an interactive center that was opened in 1998. “Estuaries, where salt water and fresh water mix, form a unique habitat that’s especially important for a lot of the ocean’s fish species,” Stroud says. “North Carolina has more estuarine waters than any state on the East Coast.”

Cap your day with a stop at the local’s favorite Cups and Cones on Water Street. Take your cone (or cup!) straight to the front porch and secure a coveted spot in a rocking chair overlooking the river — a sweet spot for a sweet treat.