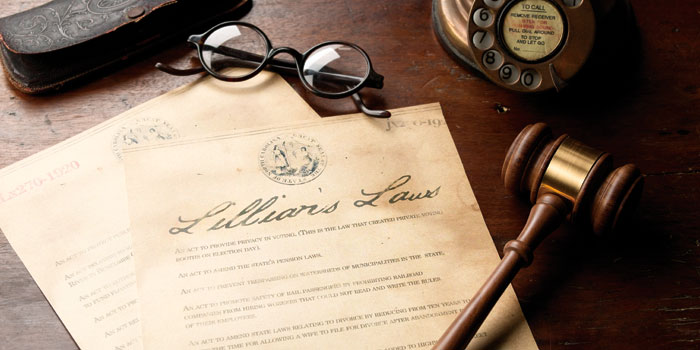 Miss Lillian’s election victory was one that most politicians could seek only on their knees or in their fondest dreams. When the votes were counted, she had racked up 10,368 while her losing opponent had a measly 41. And the story gets even better.

Miss Lillian was Lillian Exum Clement of Asheville, a normally reserved, bespectacled woman who claimed she never set out to set records, but did she ever.

She was the first female lawyer in the state to open her own law office, even though she never attended law school. When she won her first criminal case, the newspaper reporter covering the trial made such a big deal of her being a woman lawyer that he forgot to name her client or the criminal charge. She became the first female member of the North Carolina General Assembly and the first female legislator in the South at age 27, even though she couldn’t vote. The voters were all men because her victory was before the ratification of the 19th Amendment, which gave women the right to vote.

One of the first bills she introduced in the State Legislature prohibited railroads from hiring illiterates to be firemen, brakemen, and flagmen. That bill became law. She was the first lawmaker to sponsor a bill to grant voters privacy booths with a secret ballot, an act that caused an anguished outcry from the old pols who said such a policy would deny candidates an opportunity to buy votes (although they didn’t use those exact words). That bill failed once but later passed.

Clement was also the prime author of legislation that:
1. Reduced from 10 years to five the time required for a woman to win a divorce from a husband who abandoned his family.
2. Mandated that yellow caution lights be added on installation of red and green traffic signals.
3. Allowed the state to take over a home for wayward (and pregnant) teens.
4. Granted the state permission to sterilize mentally incompetent individuals.
5. Required the state to conduct tuberculin testing and inoculation of dairy herds to ensure that North Carolina had “pure milk.”

Of the 17 pieces of legislation she sponsored, 16 became law. Not bad for a woman who never really wanted to be in elective office. She had to be talked by men into becoming a candidate, was not overly keen on the suffrage movement, and, in fact, abandoned her public career after one term and returned home to embrace her role as a wife and mother. She might well have accomplished more in private and public life, but only four years after her historic election to the Legislature, she became ill after the birth of her daughter and died of pneumonia a month before her 31st birthday.

No one ever accused Clement of being timid or disinterested in public policy. She had ample determination, energy, and intelligence to help elevate the status of women, even though at times, she seemed to go out of her way to not call attention to her goals. When she opened her one-person law practice, the shingle above the office door listed the male-sounding name of L. Exum Clement.

Eye on the future

Lillian Clement was born in 1894, the daughter of George Washington Clement, who worked for George Vanderbilt as one of the builders of the Biltmore house. She attended a one-room school in Black Mountain until her teen years, when her father began working for the Vanderbilts and she began expressing an interest in the law. Edith Vanderbilt learned of that interest and encouraged young Lillian to pursue her dream.

That wasn’t an easy path for a young woman in the early 1900s, but her doggedness was not to be denied. With only limited secretarial training, she secured her first job at age 14 as a clerk with the Buncombe County Sheriff’s office. For eight years, she worked there during the day and studied law at night under the guidance of two Asheville lawyers. She passed the bar exam in 1916 on her first try, the only female in a class of 69 students, and she scored higher than most males in the class. She opened her one-person law practice in 1917 at age 23.

She impressed her fellow attorneys. The political movers and members of the bar in Asheville coaxed her into becoming a candidate for the General Assembly three years later in 1920, the same year women secured voting rights. Some speculated whether the lawyers in Asheville really felt she was the best choice or whether they felt she would be a calming influence in the controversial suffrage movement that was the hot topic of the day.

Clement was interested in aiding the cause of women, she said, but not as a trailblazer or rabble-rouser. Rather, she said, women should expect to advance quietly and with dignity. “I am by nature very conservative,” she told the newspapers, “but I am firm in my convictions. I know that years from now there will be many other women in politics, but you have to start a thing.”

Her first campaign fit that plan. She didn’t make much of a fuss over her candidacy or the suffrage cause. She spent a grand total of $25 during her campaign to defeat two Democratic primary opponents, watched her Republican opponent quit the race, and then clobbered the lone Independent candidate.

She went to Raleigh in January 1921, three months shy of her 27th birthday, to find that male legislators didn’t know exactly how to handle her presence. She became known as Brother Exum and Honorable Exum to her colleagues with little public recognition about her being a woman, although the men of Raleigh were polite in their conversations and several offered her free dinners.

She dug into legislation with serious intent in her own quiet way even as she learned that public office has its drawbacks and voters are not always polite. One weekend while Clement was back home explaining why she wanted the state to take over the Asheville facility that housed wayward girls and unwed mothers, people splattered her with raw eggs and vegetables and called her a Jezebel for wanting to help sinful females. When that happened, Clement discarded her prepared speech and spoke sincerely. It is better, she calmly told the angry crowd, to be hit with eggs than with stones, like women from Biblical times.

“I am reminded,” she told her audience as she wiped stains from her dress, “of a time long ago when people were passing judgment on a woman when weapons were not eggs but hard stones. It is not for you or I to condemn or cast the first stone, but rather [for us] to render aid to the unfortunate so they may go their way and sin no more.” Those words calmed her angry audience, and a short time later, her colleagues in Raleigh approved her proposal. On another occasion, an irate voter in Asheville was so upset with Clement that he broke her nose when he punched her in the face.

It seemed to be love instead of anger, however, that brought her home after one legislative session. She married Asheville newspaperman Elias Stafford during her term in office and didn’t campaign again. She retired from public office but not public life. She returned to her law practice and served as a director of the State Hospital in Morganton and as an officer of the Business and Professional Women’s Club in her hometown, until she became ill.

No more women served in the State Legislature for two years following Clement’s departure. But she made her mark — since 1925 there has been at least one female legislator each year. In 2010, 39 women held legislative seats, 34 in the House and five in the Senate.

Lillian Exum Clement, intended or not, led the way for others.

Ned Cline lives in Greensboro and is a former reporter for The Charlotte Observer, editor at the Greensboro News & Record, and Neiman Fellow at Harvard University.