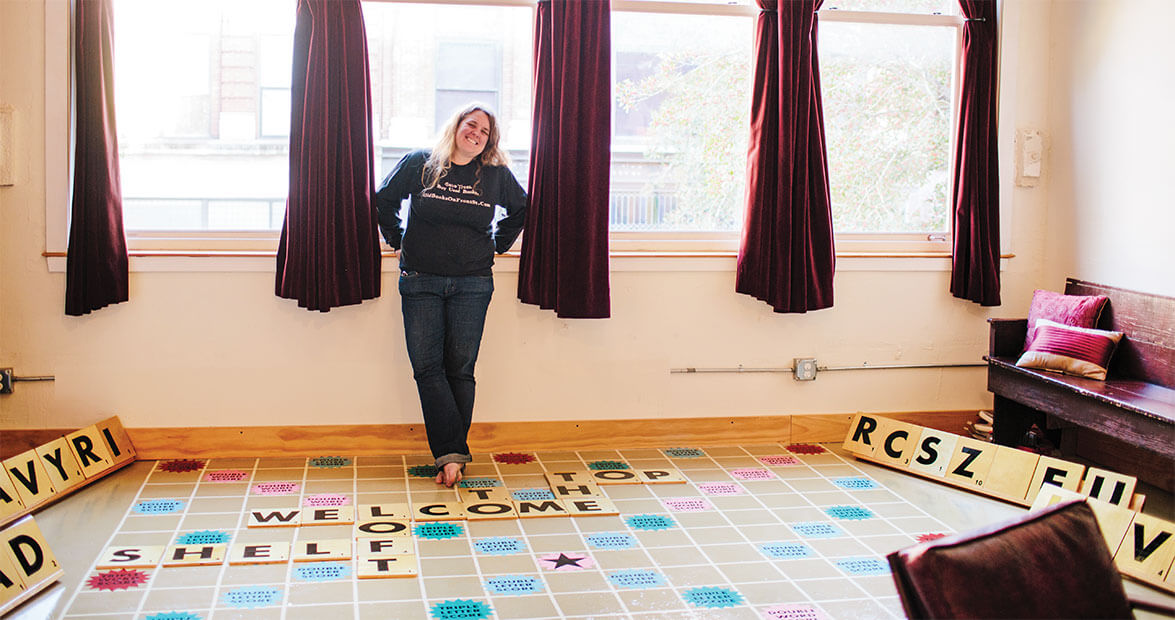 Gwenyfar Rohler woke up one Sunday four years ago with an idea. The second floor of her bookstore, Old Books on Front Street, was covered in hideous subfloor paneling. She intended to turn the space into a nightly rental and had been dying to do something about the floor: tile, paint, decoupage. Then, it hit her: “I woke up and I said, ‘We are going to build a life-size Scrabble board on the ugly, ugly subfloor.’”

The first week of the project didn’t go quite as planned. She tried to make the floor level and square, when it was clear that this 100-year-old building was neither level nor square. By the end of the week, she was sitting on the floor in tears. At that point, she said to herself, Gwenyfar, you have gotten through six years with this building by embracing its true character. Why are you forcing this? “And when I took a deep breath and embraced that, then the whole project moved forward,” she says.

Now, the 256-square-foot Scrabble board is a favorite of guests at Gwenyfar’s loft, Top Shelf. With a full kitchen, bathroom, and room for up to six people, the loft is a unique concept in downtown Wilmington, and in the state. It’s not every night that you get to sleep in a bookstore, after all.

When two professors from Chapel Hill brought their family to Top Shelf, they thought for sure that their school-age kids would fall in love with the giant Scrabble board. But the kids didn’t even touch it. Instead, they spent all weekend fighting over the manual typewriter. When their mom was getting everyone ready to leave on Sunday morning, the 11-year-old said, “Mom, we can’t go. I haven’t finished typing my novel.” 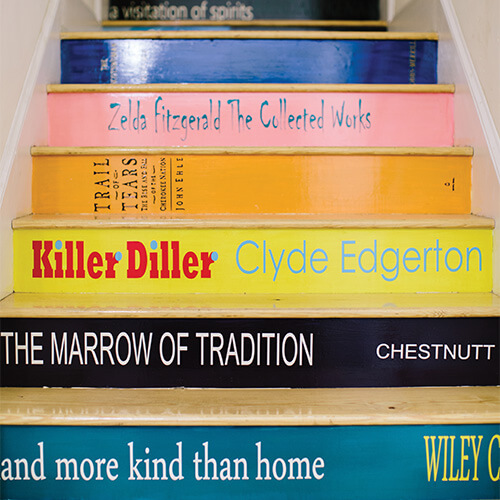 A staircase of books leads to the rental loft above Gwenyfar Rohler’s bookstore. photograph by Millie Holloman Photography

“That’s when those six years of work came together for me,” Gwenyfar says, laughing. When Old Books on Front Street moved to its current location in 2010, Gwenyfar spent six months renovating the store downstairs, but it was six years before the loft took shape. The last building her store was in had a loft, and Gwenyfar liked the idea of having someone there overnight. But, she says, “I didn’t just want to have a loft. It kept emerging as a way to showcase and pay homage to the really great writers of North Carolina.” Little by little, she went about crafting a North Carolina-themed literary retreat: There’s an ever-growing state map of North Carolina writers; thousands of books — all by North Carolina writers — are available to read there or to purchase for the trip home; and each step of the colorful staircase leading to the loft bears the title of a book by a North Carolina writer.

Without a TV in the loft, it’s these touches that provide hours of entertainment, unplugged from the demands of technology. “I think, for a lot of people, it is a novelty in this day and age,” Gwenyfar says. “It is, in a way, a place really out of time, compared to what you’re going to get at any other hotel, or even any bed and breakfast. We’re very different, and there’s something appealing about it.”

Appealing not just to couples looking for a downtown getaway close to the beach, as Gwenyfar expected, but also to families on vacation and locals wanting to celebrate an anniversary, have a girls’ night out, or just see what it’s like to spend the night in a bookstore. After strolling down the Wilmington Riverwalk, just steps away, or spending the evening absorbed in a game of giant Scrabble, the stained-glass windows that line the tops of the bedroom walls provide a sense of peace inside this “sacred space for the written word,” as Gwenyfar calls it. In the morning, guests wander down to the bookstore before the first visitors trickle in. Gwenyfar is waiting with coffee and conversation.

“There is something magical about books, something that is hard to quantify and hard to put into words,” she says. “It has a feeling of magic for people, and that is why story continues to consume us. And it continues to draw people.”