For David (left) and Saro Vay, Valentine’s Day is one of their busiest of the year. “Why buy a dozen roses when you can get a dozen heart doughnuts?” David says. photographs by Joshua Vasko

When brothers David and Saro Vay decided to open a doughnut shop in Lexington in 2017, they wanted a name that reflected their beloved hometown. Their first storefront had housed a barbecue joint called The Red Pig during Prohibition, a history that’s represented in both the name and the crimson wall at the back of the shop. Families fall in love with the Vays’ cloudlike doughnuts that can be filled with custard, cream, or jelly on the spot. “I get kids who come in here and ask for a hug,” Saro says. “Life is a little bit easier when you provide sweets and a smile.” 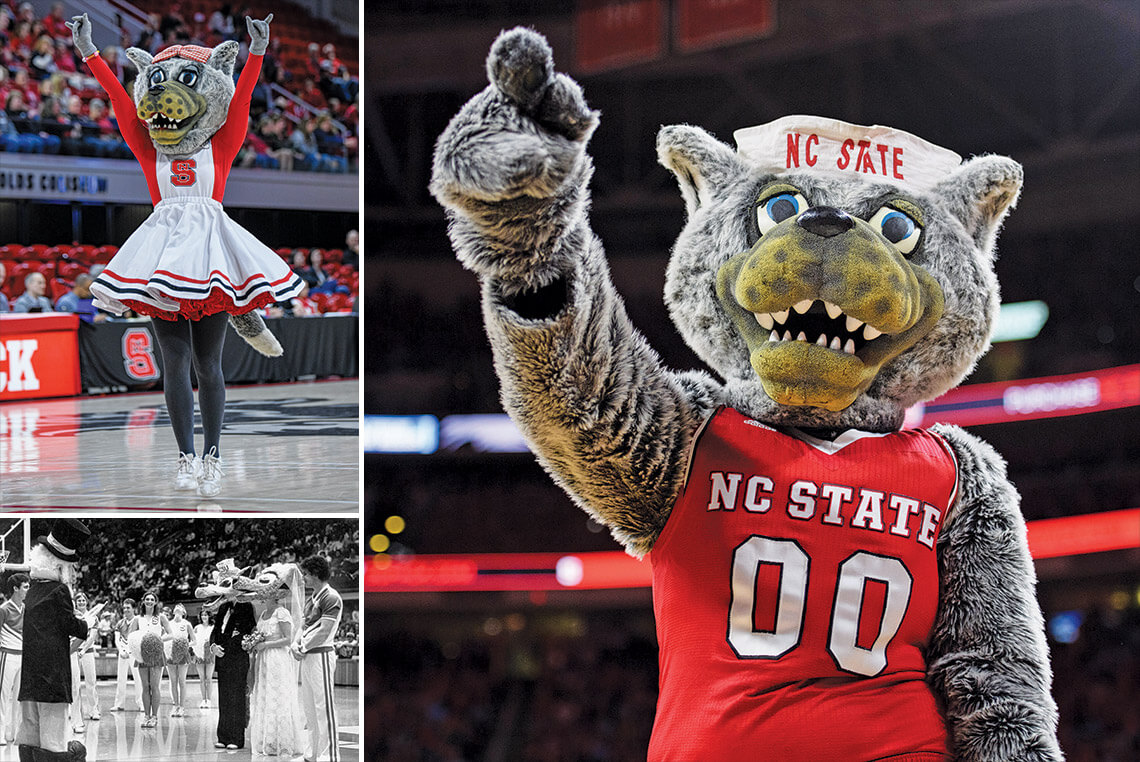 On February 28, 1981, nearly 12,000 basketball fans witnessed the marriage of Mr. and Mrs. Wuf, North Carolina State University’s mascots, in Reynolds Coliseum. The two had been known as mister and missus for years, and during halftime of a game against Wake Forest University, they made it official. Mrs. Wuf walked down the aisle to a slow version of the NC State fight song, and, in a ceremony consisting of few words and many hand (or paw) gestures, Wake Forest’s Demon Deacon united the happy couple in “canis matrimonium.” 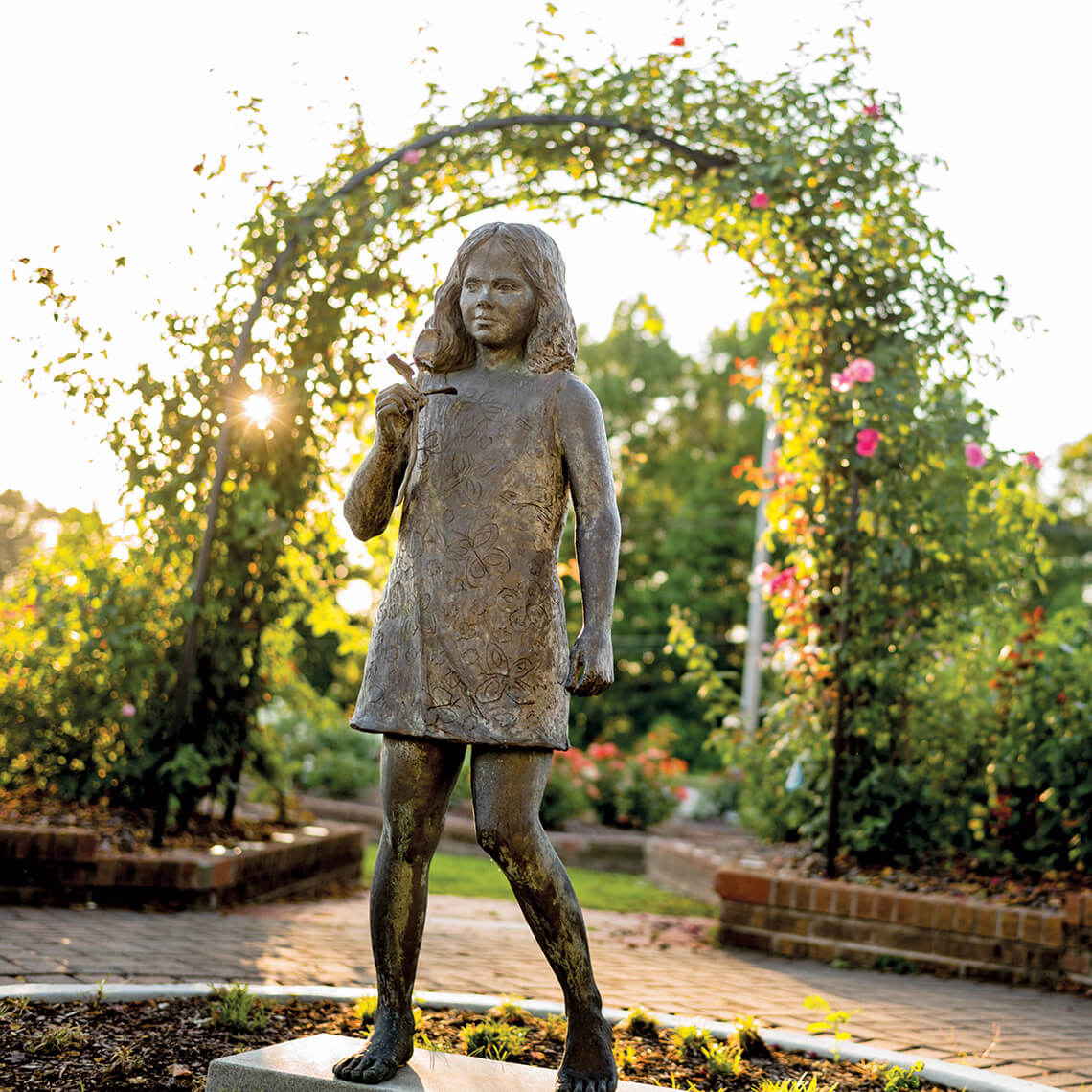 In the Fragrance Garden, Wilson sculptor Sherrod Duggan’s Child With Rose stops to smell the grandifloras. photograph by Charles Harris

… and pink, and yellow, and white. At the Wilson Rose Garden, nearly 1,200 roses in every color and more than 180 varieties are lovingly tended by a group of volunteers known as the “Deadhead Society.” The community has been involved in growing the garden since its beginning, when the late Dr. Rufus Swain, who became enamored with roses after receiving some from a fellow teacher, planted bushes at the Wilson Public Library in 1992. Soon after, Wilson residents raised money to transform a former landfill on Herring Avenue into what is now one of the state’s largest public rose gardens. The group planted the first 120 bushes, donated by a local nursery, in 1995. From May to October, volunteers lead tours through 60 flower beds, past sculptures, a gazebo, a fountain, and rose-studded arbors and trellises. 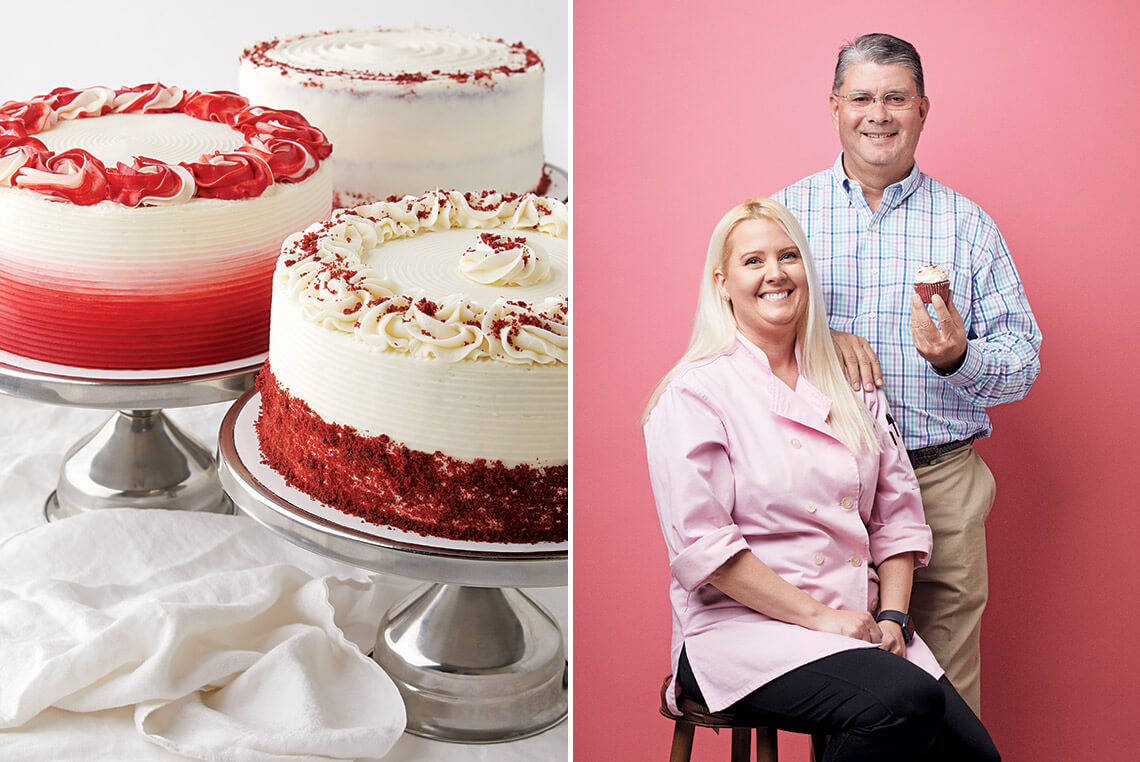 Clarissa and Tim Woolard serve their red velvet cake and around 25 other flavors by the “hunk” — a double slice that weighs about one and a quarter pounds. “Everything we do, we try to make it oversize so that you have to share it,” Tim says. photographs by Alex Boerner

Tim and Clarissa Woolard’s bakery began not with cakes, as it’s now known for, but with cookies: Clarissa’s mother’s prized peanut butter chocolate chip recipe. At first, the plan was to make just cookies, but then Clarissa’s mom taught her how to bake and ice cakes and cupcakes, too. When the Woolards opened a storefront, Clarissa created lunch and dinner menus, drawing on skills that she learned from Tim’s mother, another excellent cook. “That’s where ‘Confection Connection’ came from,” Clarissa says — “the connection with both families and what it means to gather together over the love of food.” At their shop in Greenville, the Woolards witness all kinds of connections: engagements, birthdays, and baby showers; parents meeting the new boyfriend or girlfriend. “In eastern North Carolina, people express their love with food,” Tim says. “If you love ’em, you feed ’em good.”

A Labor of Love

The Maude Moore Latham Garden is a tribute to one of The Dreamers, five local women who helped bring Tryon Palace back to life. In 1944, Latham established a trust for the restoration of the colonial mansion, and was later appointed chairwoman of the Tryon Palace Commission. She died in 1951, just a year before renovations began. A lifelong member of the Garden Club of North Carolina, Latham was memorialized in a formal garden at the palace, where carefully planned paths wind through clipped hedges and beds of spring tulips, summer annuals, and fall chrysanthemums, planted each year by gardeners who share her passion for this place. 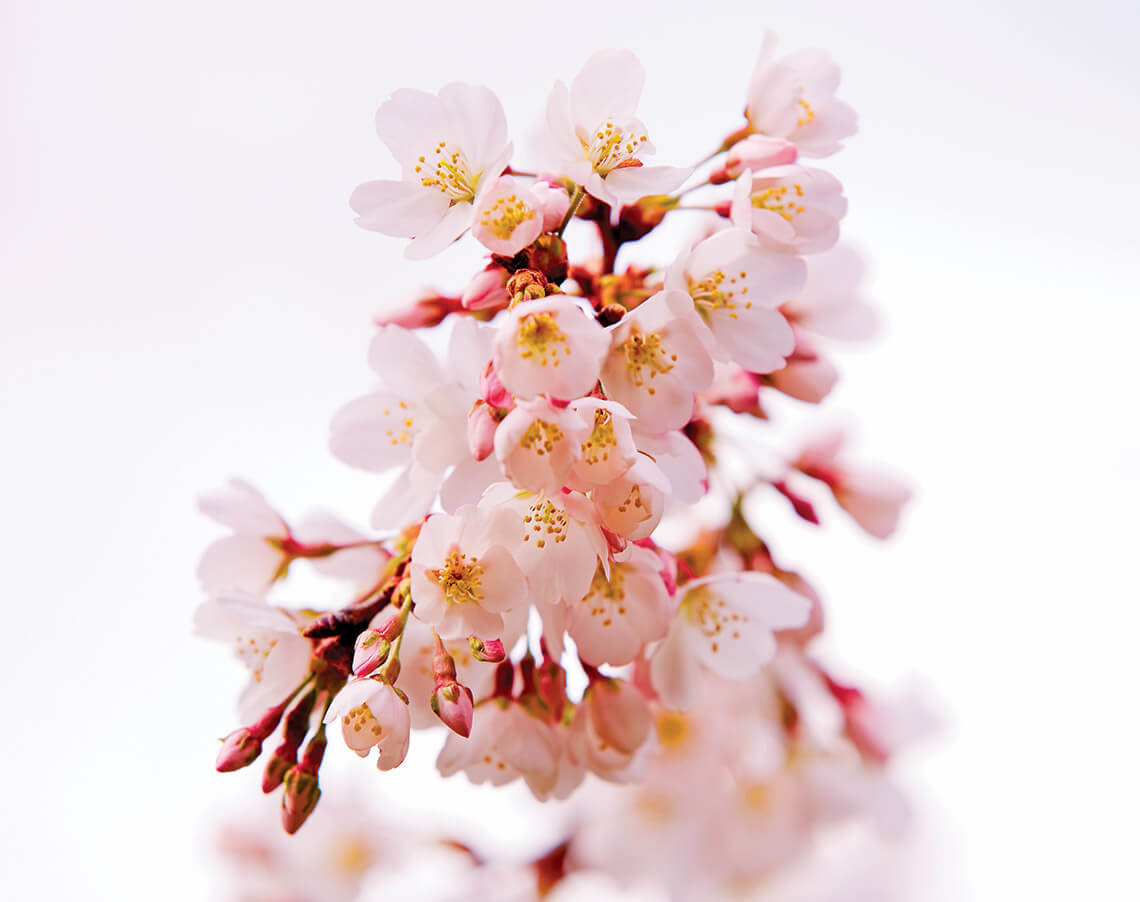 During the spring, flowering cherry trees at the Tanger Family Bicentennial Garden in Greensboro put on a spectacular show. Their pink petals open into delicate blooms for just two weeks before they wither and drift to the ground like snow. In Japan, where there are more than 200 native species, cherry blossoms are a symbol of the fleeting nature of life. During the 1,000-yearold tradition of hanami — literally “watching blossoms” — people gather beneath the trees to eat and drink with friends and family in celebration of life, love, and living in the moment.

Sunrises and sunsets at the coast transform the Carolina blue sky into a multicolored masterpiece, best admired with toes in the sand or from Kure Beach Pier (right). photograph by WRIGHT AND ROAM

Long Walks on the Beach

From sunrise to sunset — and during starry nights in between — beachgoers and anglers walk the 711 feet to the end of Kure Beach Pier. Since it was built in 1923, this pier, the oldest on the East Coast, has been destroyed and rebuilt again and again. Today, vacationers who visited the pier as children years ago share the experience with their own children and grandchildren. The wooden floorboards and rails may be newer, but the joys of walking out over the Atlantic are the same: casting a line for flounder, bluefish, drum, and king mackerel, or gazing out at miles of ocean and an endless pink-and-purple horizon. 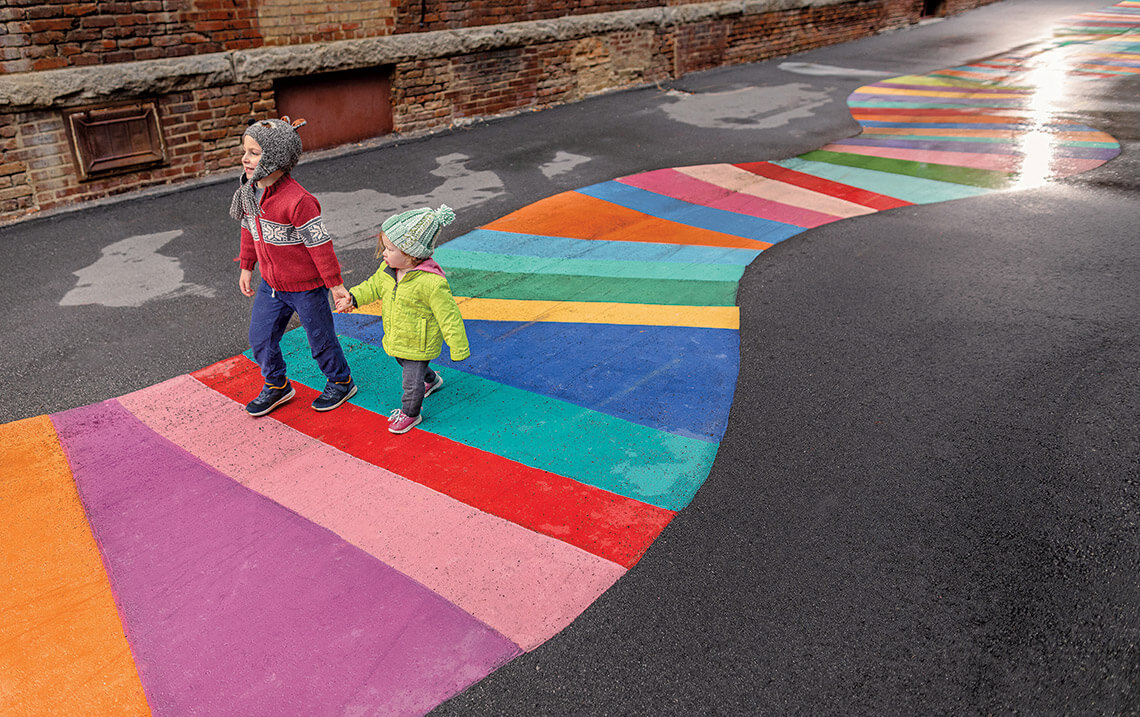 A Point of Pride

With each step on this colorful walkway, the alley off of West Washington Street in downtown Greensboro grows a little brighter. In 2019, as part of an effort to put art in unexpected places, Downtown Greensboro, Inc., commissioned local painter Gina Franco to create a path that zigzags through what’s now known as Rainbow Alley. The once-dreary alley is now a popular photo op, along with dozens of other public art installations throughout the city representing people from all walks of life. 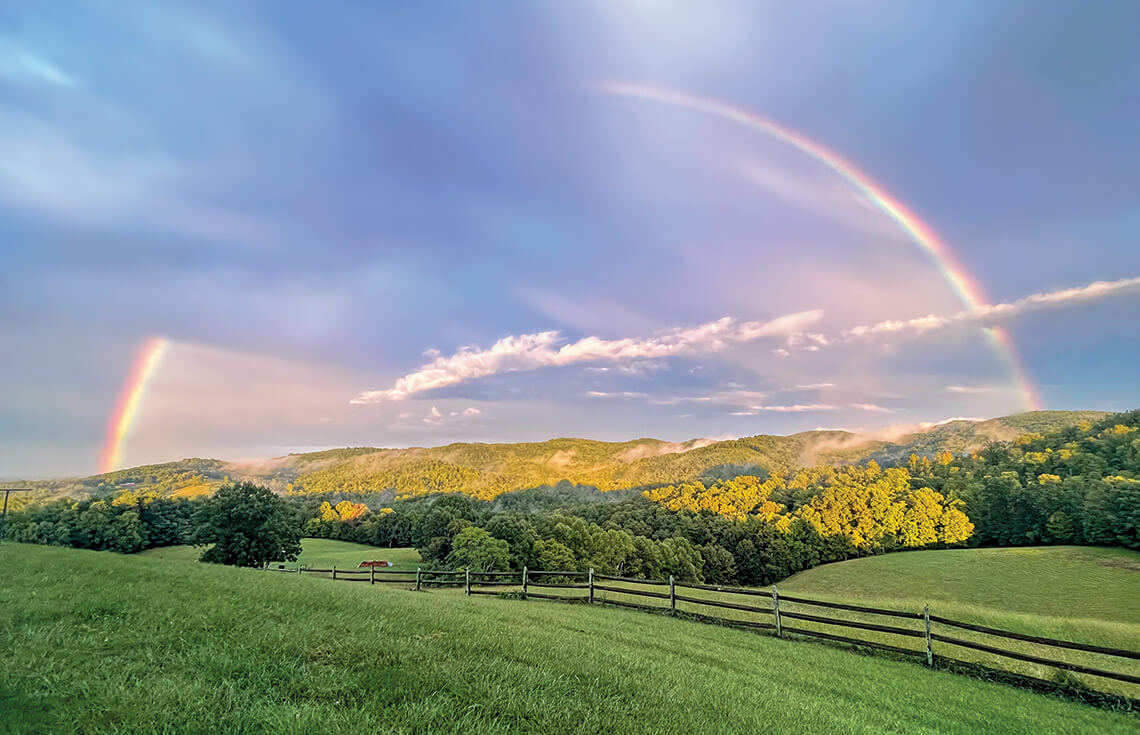 What A Wonderful World

The colors of the rainbow — “so pretty in the sky,” as Louis Armstrong sang — blend together in perfect harmony. They celebrate all forms of love and create something beautiful. The treasure at the end might not be a pot of gold, but it’s equally as precious: a place where North Carolinians show their appreciation for their home and each other in countless ways. Whether they’re baking and cooking, tending gardens with care, beautifying their hometowns, or sharing intimate or celebratory moments with friends and family, partners and neighbors, you know what they’re really saying: “I love you.”