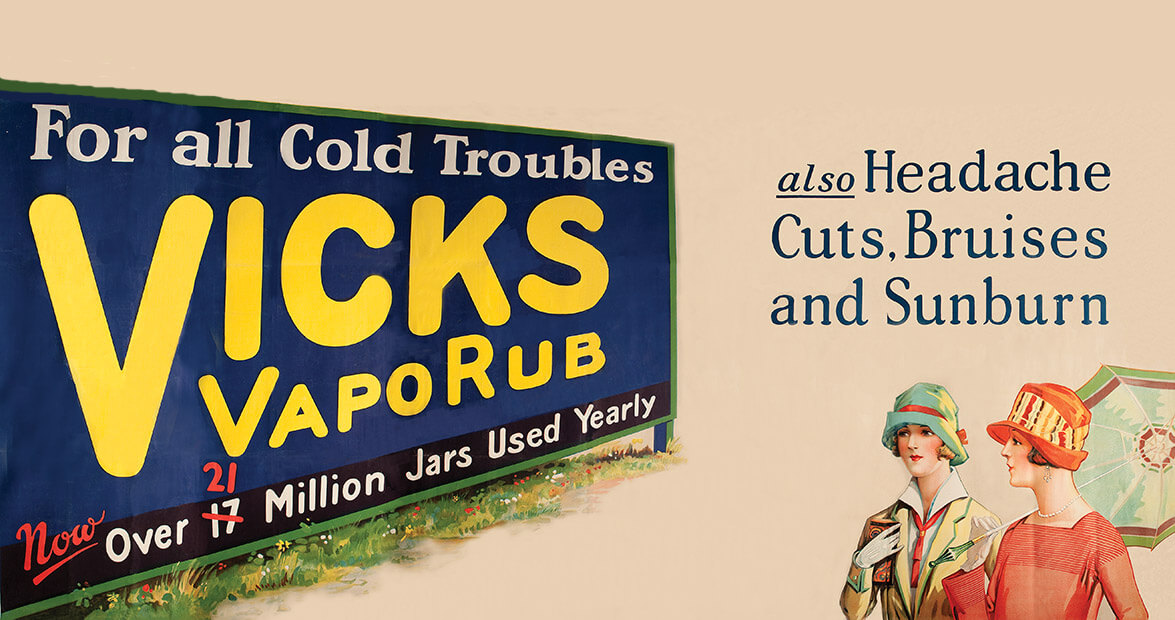 Pharmacist Lunsford Richardson made Vicks a household name throughout the nation, but his popular product did not do the same for him.

Even in his native North Carolina, where his most celebrated of chemical concoctions has been right under our stuffy noses and on our congested chests for generations, the mention of Richardson’s name elicits blank stares from all but those who study and cherish history. Richardson’s salve, Vicks VapoRub, helped the world breathe easier during the devastating influenza pandemic of 1918 and during the countless colds and flus of our childhoods, yet most of us couldn’t pick Lunsford Richardson out of a one-man police lineup, much less a who’s who of medical pioneers.

Why didn’t Richardson — by all accounts a creative inventor and smart businessman — ever become as famous as those vapors packed into the familiar squat blue jar?

Because his name wouldn’t fit on the jar.

That’s one version of the story. According to company and family lore, Richardson initially dubbed his promising new product Richardson’s Croup and Pneumonia Cure Salve. Realizing that this name didn’t exactly roll off the tongue nor fit when printed on a small medicine jar, Richardson changed the name to honor his brother-in-law, Dr. Joshua Vick. Another account suggests the inventive druggist plucked the name from a seed catalog he’d been perusing that listed the Vick Seed Co.

The truth may never be known. What is known, though, is that Lunsford Richardson created a medicinal marvel for the ages, the likes of which may never be equaled.

A Johnston County native born in 1854, Richardson loved chemistry and hoped to study it at Davidson College. The college’s chemistry program at the time wasn’t as strong as he’d hoped it would be, so he studied Latin instead, graduating with honors in three years. He returned to Johnston County and taught school, but it wasn’t long before the young man’s love of chemistry got the best of him. In 1880, he moved to Selma to work with his physician brother-in-law, Dr. Vick. It was not uncommon in those days for doctors to dispense drugs themselves, but Vick was so busy seeing patients that he teamed up with Richardson, allowing him to handle the pharmacy duties for him. Richardson relied on his knowledge of Latin to help him learn the chemical compounds required to become a pharmacist, and that’s when he began to experiment with recipes for the product that would become Vicks VapoRub.

It wasn’t until Richardson moved to his wife’s hometown of Greensboro in 1890 that his magical salve and other products he created began to take off.

“He was a man of great intellect and talent,” says Linda Evans, community historian for the Greensboro Historical Museum, which has an exhibit devoted to Richardson and Vicks. “Druggists at the time fashioned their own remedies a lot, and he created a number of remedies, in addition to his magic salve, that he sold under the name of Vick’s Family Remedies. He was obviously a man of such creativity.”

These products sold with varying degrees of success, but the best seller in the lineup of Richardson’s remedies was Vick’s Magic Croup Salve, which he introduced in 1894. And by all accounts, necessity was the key to its success.

“He had what they referred to as a croupy baby — a baby with a lot of coughing and congestion,” explains Richardson’s great-grandson, Britt Preyer of Greensboro. “So as a pharmacist, he began experimenting with menthols from Japan and some other ingredients, and he came up with this salve that really worked. That’s how it all started.”

Another version of the story suggests that all three of the Richardson children caught bad colds at the same time, and Richardson, dissatisfied with the traditional treatment of the day, which included poultices and a vapor lamp, spent hours at his pharmacy developing his own treatment.

Richardson’s salve — a strong-smelling ointment combining menthol, camphor, oil of eucalyptus, and several other oils, blended in a base of petroleum jelly — was a chest-soothing, cough-suppressing, head-clearing sensation. When the salve was rubbed on the patient’s chest, his or her body heat vaporized the menthol, releasing a wave of soothing, medicated vapors that the patient breathed directly into the lungs.

Vicks in the mailbox

In 1911, Richardson’s son Smith, by now a successful salesman for his father’s company, recommended discontinuing all of the company’s products except for Vick’s Magic Croup Salve. He believed the salve could sell even better if the company stopped investing time and money in the other, less successful remedies. He also suggested renaming the salve Vicks VapoRub, according to the company’s history timeline, to “help dramatize the product’s performance.” Richardson agreed, and a century later, the name’s still the same.

Meanwhile, Richardson intensified his marketing efforts by providing free goods to druggists who placed large orders and publishing coupons for free samples in newspapers. He also advertised on billboards and sent promotional mailings to post office boxes, addressed to Boxholder rather than the individual’s name, thus earning him the distinction of being the father of junk mail.

In 1925, Vicks even published a children’s book to help promote the product. The book told the story of two elves, Blix and Blee, who rescued a frazzled mother whose sick child refused to take nasty-tasting medicines. Their solution, of course, was the salve known as Vicks VapoRub.

As successful as the marketing campaign was, nothing sold Vicks VapoRub like the deadly Spanish flu outbreak that ravaged the nation in 1918 and 1919, killing hundreds of thousands of Americans. Loyal Vicks customers and new customers stocked up on the medicine to stave off or fight the disease. According to the company’s history timeline, VapoRub sales skyrocketed from $900,000 to $2.9 million in a single year because of the pandemic. The Vicks plant in Greensboro operated around the clock, and salesmen were pulled off the road to help at the manufacturing facility in an effort to keep up with demand.

As the flu spread across the nation, Richardson grew ill with pneumonia in 1919 and died. Smith took over the company. Vicks continued to grow, buying other companies until Procter & Gamble bought it in the 1980s. Through the years, Vicks continued adding new products to its arsenal of cold remedies: cough drops, nose drops, inhalers, cough syrup, nasal spray, Formula 44, NyQuil. And whatever success those products attained, they got there standing on the broad shoulders of Richardson.

Richardson will never be a household name, but his salve has held that status for more than a century — and may do so for the next hundred years. And for Richardson, were he still around, that ought to be enough to clear his head.

Vicks users have claimed the salve can cure and heal many maladies. Even though Vicks doesn’t say the salve works for these problems, people still believe.

Toenail fungus: Rub the salve on your toenails, cover with socks, and sleep your fungus problems away.
Cough: For a similar fix to a nagging cough, some believe rubbing Vicks on the soles of your feet can fix the problem.
Dandruff: Rub Vicks directly on the scalp, and your flakes may just disappear.
Chapped lips: Petroleum jelly is one of the ingredients in Vicks, and some say the ointment can help heal cracked lips.
Mosquito bites: If you smooth Vicks on the red bumps on your legs and arms, it can supposedly take the itch right out.
Warts: Dab Vicks on the wart, cover with duct tape, and it may fall off in a few days.