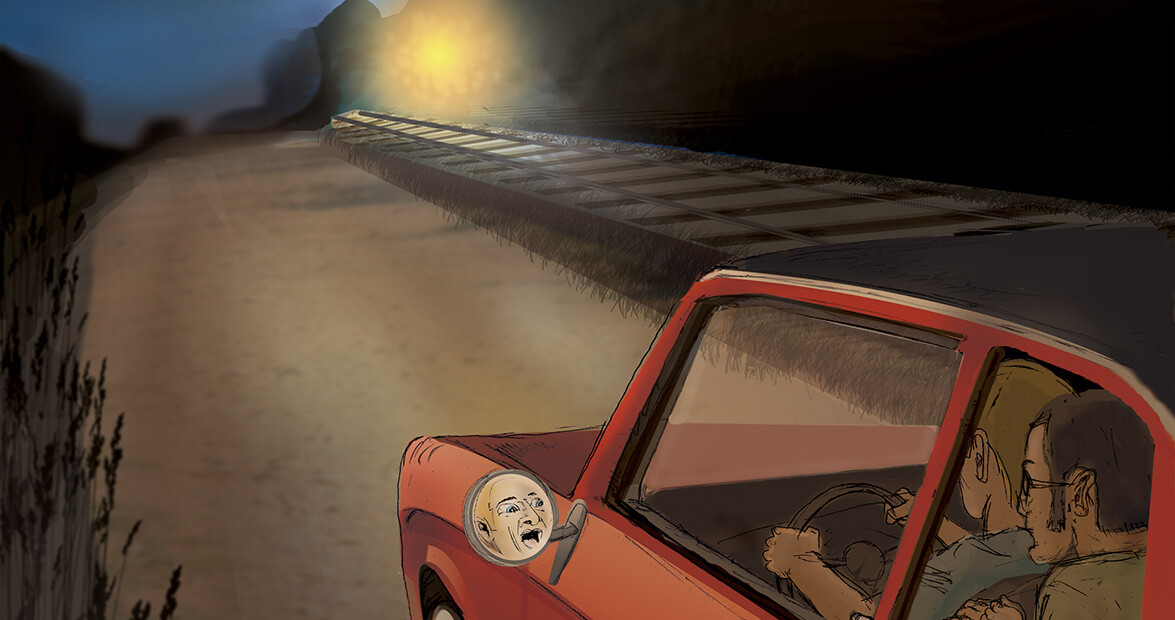 My youngest daughter once asked me before her nightly bedtime story, “Daddy, do you believe in ghosts?”

Her eyes opened wide as I pulled the covers over us and began the tale of Joe Baldwin and the mysterious Maco Light.

Maco is a crossroads at the intersection of U.S. Highway 74-76 and N.C. Highway 87 in rural, northeastern Brunswick County. More than a century ago, railroad workers knew it as Rattlesnake Grade, a dirt path crossing just down the tracks from the low trestle over Rattlesnake Creek. It was later known as Farmer’s Turnout, one of many whistle-stops along the Wilmington and Manchester Railroad between Wilmington and Augusta, Georgia.

The mystery light is said to be the ghostly lantern carried by Joe Baldwin, a brakeman for the railroad who was killed in a tragic accident near Maco on a summer night in 1867. According to legend, Baldwin was on the last car of his train when it suddenly uncoupled and began coasting down the track. Realizing another fast-approaching train would soon collide with his car, he scrambled to the rear deck and began madly swinging his lantern to warn the approaching engineer. It was too late. The violent collision decapitated Baldwin, and he spent the next century haunting the nearby tracks, swinging his signal lantern before him in search of his severed head.

When I was a teenager in the early 1970s, the road trip to Maco was an irresistible adventure for my friends and me. On otherwise boring Friday nights, we piled into my best friend’s Chevy Nova and made the 40-minute journey up N.C. Highway 87 from Southport. With the radio blaring rock music, we cruised toward the Maco crossing, then slowed to search the darkened roadside for the unmarked tracks. There, we turned down a narrow, overgrown, dirt path that ran parallel to the rails into the darkness. A quarter-mile or so off the highway, we stopped the car and killed the headlights.

We made the trip many times, usually with the same result — not much happened. No mystery light. But it didn’t matter because we were in the middle of nowhere having fun, just waiting in the dark. We had plenty of time to scare each other with stories we’d heard from people we knew who’d seen the light themselves.

Witnesses who saw the eerie phenomenon described an amber light that suddenly appeared out of the darkness. It hovered waist-high above the train tracks, wavering like a swinging lamp as it advanced closer and closer. Just as it reached the observer, it disappeared, only to reappear farther up the tracks and with greater intensity.

Over the years, attempts to explain the mysterious specter included distant car headlights; swamp gas; and St. Elmo’s Fire, a weather phenomenon that some say causes balls of fiery light to appear in the sky. Ultimately, each of these theories was discounted. The Maco Light predated the automobile by several decades, and anyone who saw it move up and down the tracks rejected the swamp gas theory.

According to the Wilmington Railroad Museum, the first sightings date back to 1873; for years afterward, travelers passing through the area reported seeing a mysterious light. It disappeared for a time after a powerful earthquake struck Charleston and the South Carolina Lowcountry in 1886, but sightings resumed shortly thereafter.

President Grover Cleveland’s train stopped in Maco on a trip through the area in 1889. When he asked the conductor why the signalman used two lights instead of one, the conductor told him the story of Joe Baldwin, explaining that two lights were needed to distinguish real trains from Baldwin’s ghost lantern. The president was intrigued, and he later shared the tale with colleagues in Washington, D.C., introducing the legend of the Maco Light to a national audience.

Sightings continued through the years. In 1925, the light apparently chased two farm boys into the woods. In 1946, Wilmington Morning Star photographer Pete Knight staked out the Maco tracks and returned with a blurry photo that ran in the paper with the caption, “There was a chunk of ectoplasm as big as life.” Life magazine ran a feature about it in 1957, prompting visits from famous psychics, university professors, and a team of investigators from the Smithsonian Institution. A “machine gun detachment” from Fort Bragg was deployed to hunt down the light in 1960, with no success.

The dirt road beside the Maco tracks also became a popular destination for weekend dates. Some remember first seeing the light’s eerie glow during hayrides sponsored by Cape Fear Presbyterian Church in Wilmington. In Haunted Wilmington and the Cape Fear Coast, Southport native Brooks Newton Preik writes about seeing the Maco Light while dating in the 1960s: “It was the eeriest thing I ever saw in my life.”

When the Seaboard Coast Line Railroad removed the tracks through Maco in 1977, the mysterious light disappeared for good. After a hundred years of unexplained encounters, the brakeman’s lantern was snuffed out, no longer casting its glow through the swamp forests by the old rail bed. Joe Baldwin moved on.

Or was it Baldwin, after all? While researching the antebellum railroads of the region, Wilmington native James C. Burke may have uncovered the true origin of the Maco legend. Burke found no record of a Joe Baldwin working for the railroad at any time during the 1860s. He did, however, find well-documented accounts of a Charles Baldwin, who was injured in a train accident near Maco on January 4, 1856 — a full decade before Joe Baldwin’s reported demise. Charles was not decapitated, but he did die from head injuries on January 7. For a brief time, he was buried in St. James Cemetery in Wilmington. His remains were later moved to an unknown location, and his headstone was lost.

My friends and I made our last trip to Maco on a cool autumn night in 1974, six of us crammed into that two-door Chevy. Like so many times before, we edged down the narrow, dirt path and stopped the car under a pitch-black sky. We sat inside, talking and joking, until we were interrupted by a shrill scream from the front seat: “Look! What is that?”

There, straight ahead in the distance, was the unmistakable, yellow glow we’d heard about all our lives. Amid earsplitting screams from my friends in the backseat, my heart pounding, I tried to focus on what I saw. The light moved slowly down the tracks toward our car.

“We couldn’t believe our eyes at first,” remembers Keith Caroon, the driver. “We watched it come toward us; then it went out. When it reappeared, it was even brighter and closer. Everybody kind of freaked.”

I still recall the amazing exit Caroon managed with that Nova. With high brush on one side and tracks on the other, there was no place to turn the car around. “I’ll never know how I was able to back out of there in a straight line at full speed,” Caroon says.

Today, a trip to Maco reveals very little of its ghostly past. The highways have been widened, new homes and businesses have moved in, and the path of the old railway lies hidden in the brush. A few submerged stumps are all that remain of the old trestle over Rattlesnake Creek, and the site is now privately owned — trespassing is prohibited. Maco has no museum, no historical marker, no visible remembrance of the mysterious light. None except a nearby neighborhood street named for the famous Tar Heel spirit: Joe Baldwin Drive.

To learn more about the railroads of North Carolina, visit the Wilmington Railroad Museum.