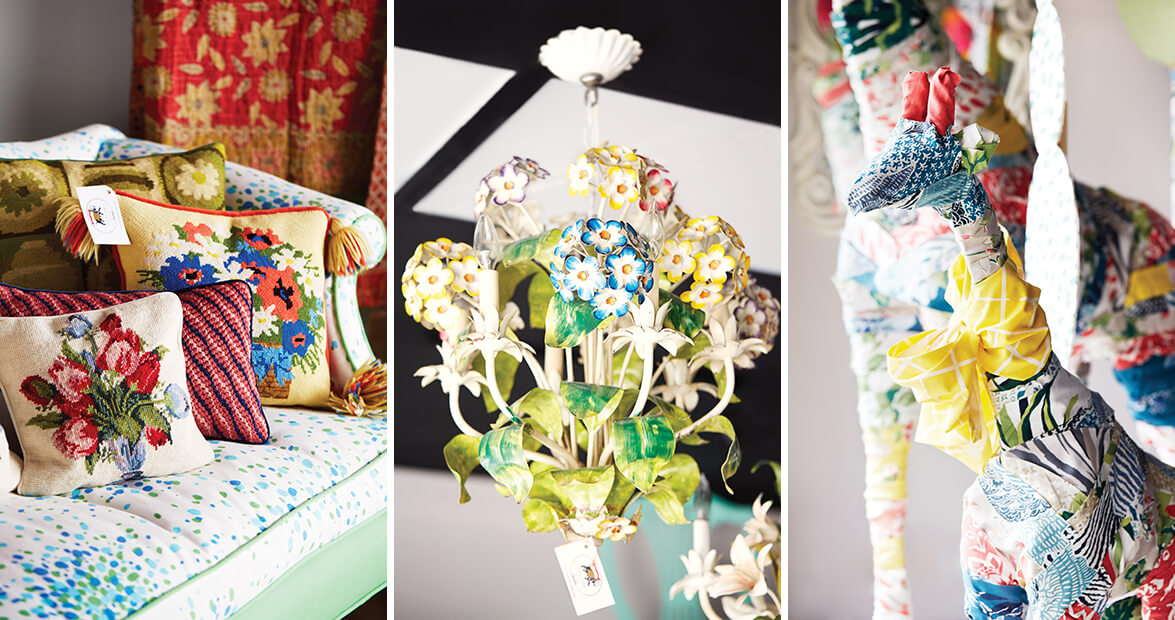 “McLarty’s is the drugstore where everyone came to get their orangeade,” designer Jason Oliver Nixon says. “We love the history.” A film company purchased the original, rewired, 12-foot “PRESCRIPTIONS” sign in bright red-and-white cursive. Appropriate, then, that bright colors are the signature of Madcap Cottage and its owners, the self-named Madcap Gents: Jason and his partner, John Loecke. Nearly everything — lamps, furniture, fabrics, wallpapers, linens, pillows, and decorative objects — is rendered, re-covered, or arranged in a riot of bright colors. Best of all, unlike many of downtown High Point’s delectable-looking but off-limits showrooms, any ol’ layman or passerby can enter Madcap’s happy world. 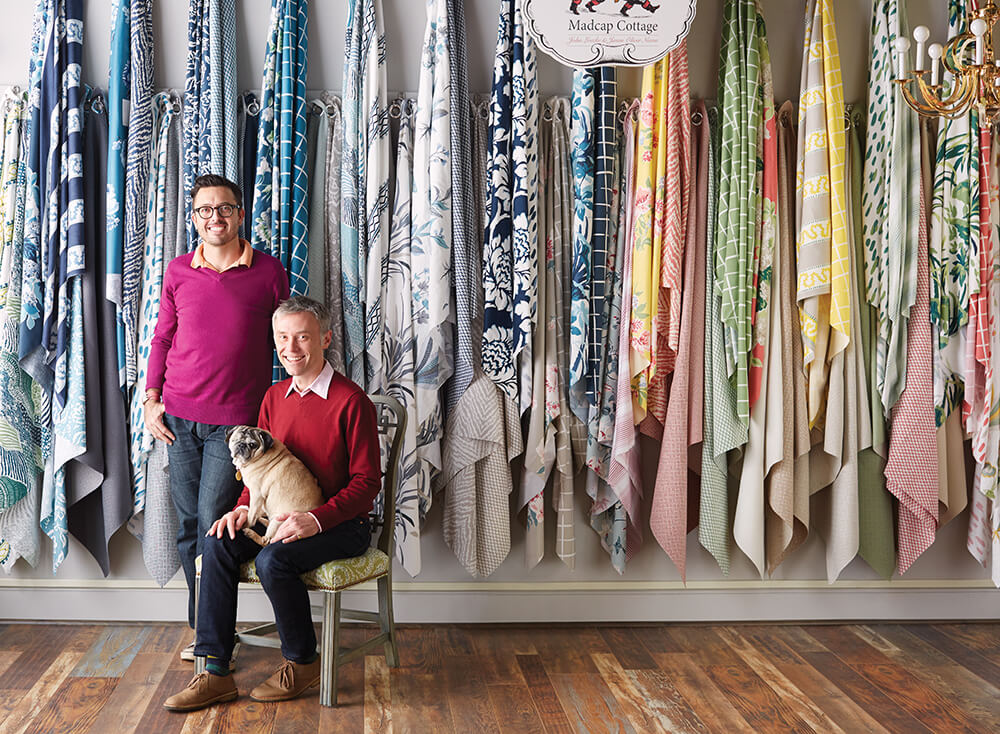 “Why is High Point a city that’s only open 20 days a year, and then only open to certain people?” Jason asks. He and John are determined to break the rules: Everything at Madcap Cottage is for sale every week, and not just “to the trade.” “Why shouldn’t High Point be a year-round design center?” he asks. These hypotheticals are reflected in the gents’ trademark mantra: to demystify and democratize design. Former magazine editors and television producers, the pair had regularly visited High Point for the furniture market, tacking on a few extra days for playing in and traveling the state. But after spending a month in 2013 working on the Adamsleigh showhouse in the nearby Sedgefield neighborhood, the two realized that, after 23 years, they’d “maxed out” of New York. High Point won as the relocation destination. They were sure of their decision after watching interviews with renowned urban planner Andrés Duany, who spoke on High Point’s potential. “We wanted to be part of that dialogue and conversation,” Jason says.

Yes, Jason and John are decorating a major global jewelry executive’s home, a beach house in Sarasota, Florida, and a Georgian-style house outside Washington, D.C., and creating bedding, pillows, and window treatments specially for the Home Shopping Network. But they’re here, in downtown High Point.

“We want to make High Point a design hub,” Jason says. “Every day we wake up with this dream team of elves with amazing capabilities” — a k a craftsmen of every ilk in and around High Point — “at our fingertips and say, ‘Hey, let’s try something new.’” 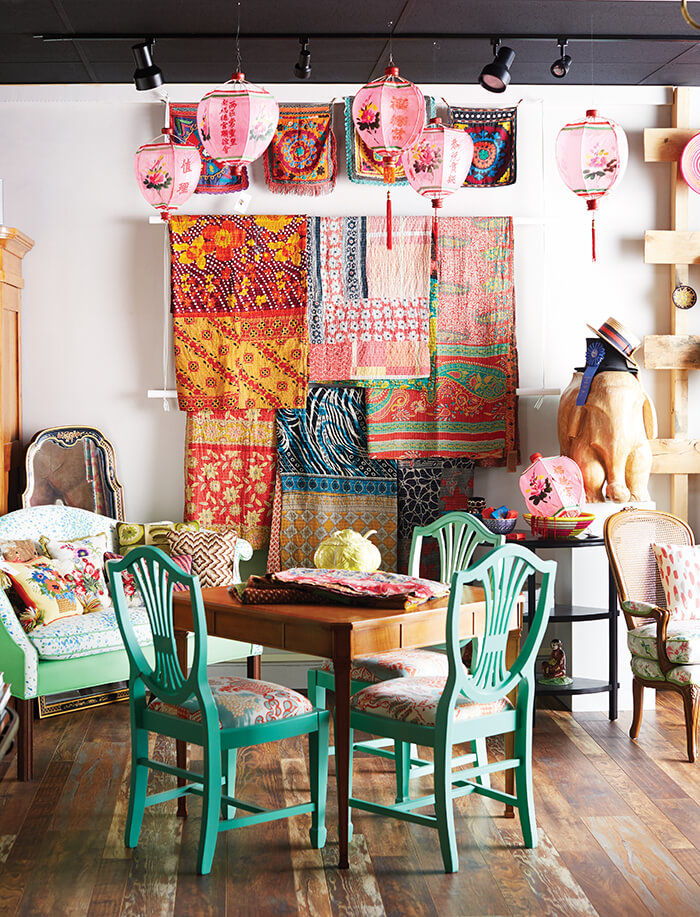 Madcap Cottage’s colorful vintage designs are inspired in part by antiques shops and cafés in small towns across the state. photograph by Stacey Van Berkel

Because much of their inventory is vintage, “something new” might be a mid-century sofa re-covered with six colors and patterns. Madcap’s philosophy is that houses — and how they’re decorated — should be fun. “We have dogs; we drink wine,” Jason says. “We’re not your people if you want really sleek.”

Floor to ceiling, Madcap Cottage lives up to its throwback adjective meaning fancy-free.

In this cottage, you can schedule an hour with a designer, browse through samples at the fabric and wallpaper bar, or simply drop in and pick up a vintage gift. The soaps, chocolate, peanut brittle, and bath bombs are sourced from across the South; the makeup bags (with bright orange zippers) and dog collars (that can go in the dishwasher) are made in High Point. As Jason says, “Madcap Cottage is a design laboratory where you never know what we’re going to cook up.”

Indeed, outside the cottage, you might see a bed passing by on a skateboard, part of a video the gents are working on. Inside, the brightly papered walls are on wheels, changing to accommodate public design seminars. Madcap Cottage lives up to its throwback adjective meaning fancy-free. As does full-of-quips Jason Nixon. “We’re obsessed with needlepoint,” he says, and, “We’re very much about diminutive,” and, “Florals are our thing.”

Jason knows his stuff. Which is why, when he says, “Life is short, and every touch point should be exceptional,” followed by, “I copy-edit street signs. Why doesn’t Starbucks have an apostrophe?” I know it’s probably time to pack up my pen. Lest I stick around for the champagne that’s undoubtedly in the cottage fridge.