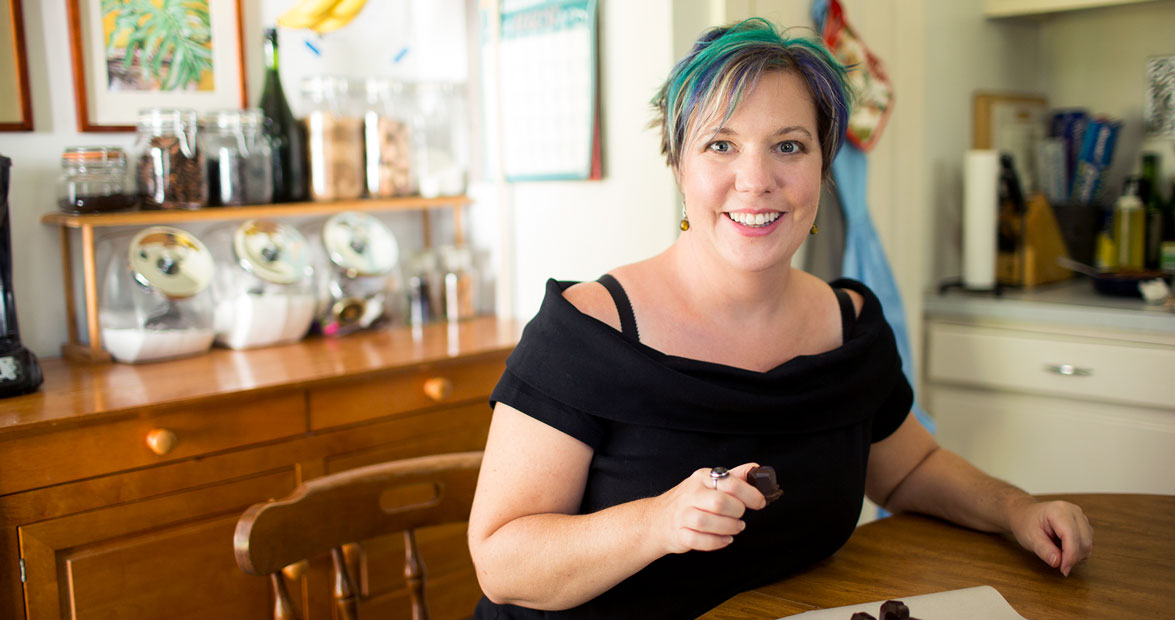 You can’t fake good chocolate, and you definitely can’t fake ingenuity. No one would dare accuse Jennifer Farrow of either. As the owner of Jenni’s Ugly Chocolates in Greenville, Farrow turns silky chocolate and delightfully unexpected flavor combinations into the perfect gourmet experience.

Making chocolate began as a hobby for Farrow. But soon, tinkering with chocolate turned into research, and research turned into learning a very particular science: tempering chocolate to achieve a firm texture, a dark glossy coating, and a satisfying snap in each bite.

But while technique is important, it’s the fillings that make Farrow’s chocolates special. She uses local ingredients to create flavors so piquant that the chocolates sing: cream and butter from a dairy farm just down the road from her house; local honey, pecans, and sweet potatoes; and even liquor from nearby distillers.

Experimenting with flavors drew Farrow to chocolate and provided an outlet for creative expression — she came for the problem-solving and stayed for the art. Beyond the craft itself, she also loves packaging and merchandising her creations. “What keeps me engaged and looking forward to challenging myself further is that there are so many more things that I can do,” Farrow says. “I can push this further not only on the culinary side but also on the artistic side, and that’s very exciting to me.”

It took months for Farrow to perfect Sweet Potato Crunch, the Food and Drink category winner for the 2018 Made in NC Awards, which will be formally celebrated on November 10. Flavors that she thought were shoo-ins, like strawberry, got lost in the chocolate — until sweet potato came along and surprised her. The deep notes of the chocolate rounded out the savory essence of the sweet potato in such a beautiful way that the combination quickly became a favorite.

“If I were to describe Sweet Potato Crunch, I would say it’s like having Thanksgiving dinner with your quirky uncle who tells all the best jokes,” Farrow says. The filling is everything you’d want from a sweet potato mash: creamy and buttery and topped with brown sugar, accented by rich chocolate, bright toffee, a hint of vodka, and crunchy pecans.

It was these unexpected flavors that won Farrow the Made in NC Award. Considering that she’d entered the contest just for fun, the victory came as a surprise. Now, the demand for her chocolates is greater than ever, and to fill the new influx of orders, she plans on upgrading to a larger space, getting new machinery, and developing a website.

Regardless of what happens next, Jenni’s Ugly Chocolates is sure to retain its signature pluck and personality. And maybe a little poetry, too: For Farrow, the beauty of chocolate is its transience. “Some of the most invigorating and wonderful feelings that we can have and experience in our life are fleeting,” Farrow says. “And so it’s just a moment, just a bite. A rush of flavors, and then it’s gone.”