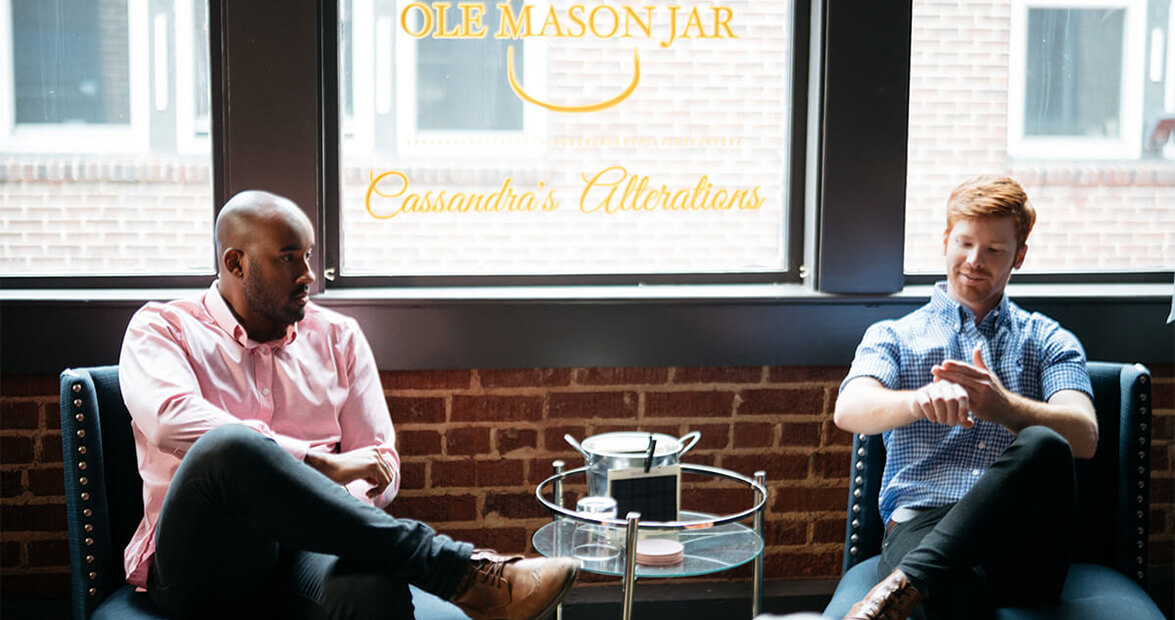 Ole Mason Jar comes from humble beginnings; the idea was conceived in the dorm room of co-founders — and college roommates — Filipe Ho and Bradley Rhyne. Though neither of the young gentlemen had professional experience to start a successful menswear company, they had a clear vision of an upscale apparel brand and were determined to bring it to life.

In 2013, the men revisited that vision and founded Ole Mason Jar. The company focuses on bringing manufacturing back to North Carolina, while also giving back to the community through philanthropic work and providing a menswear experience normally only found in major U.S. cities. Read Our State’s interview with co-founder Bradley Rhyne below to learn how Ole Mason Jar strives to be a feel-good company, both physically and figuratively.

OS: Tell me how Ole Mason Jar first got started.

Rhyne: We launched in 2013, but as for how we got started, we have to go back a few more years. The co-founder and I are both from North Carolina; we went to Appalachian State University. We were roommates in college and we both really liked fashion. We both really enjoyed clothing and shirting, but felt there was a need for clothes that fit a little bit better, and we never really liked the fabrics available at your typical big box retail stores. We’re entrepreneurial drive, so we said, “Lets start a company right out of school.” But when we graduated in 2007, we realized that we didn’t really know anything about the real world, so we decided to get “real” jobs and learn some more and maybe come back to the idea. Five years later we came back to it, and we launched in 2013. Now we’ve been in business little over four and a half years.

OS: What’s the story behind the name?

Rhyne: When we were thinking about what we wanted to embody the brand, the thing that we kept coming back to was tradition. We want staples — things that are going to last a really long time. We want to keep things very simplistic, a vintage look and feel to them, what’s old is new… That was the embodiment of our style. So, as we were thinking about what this company is — what’s symbolic, what’s versatile, what’s something that represents a throwback of a time that one was — incidentally I was sitting at my grandmother’s house. She was canning green beans in a mason jar, and it was like a light bulb in my mind. The Mason jar; that embodies all! It’s simple, it’s versatile, you can use it for a ton of different things.

OS: Were you always interested in entering the clothing business?

Rhyne: Personally, no — if you had told me when I was in high school that I would one day own a clothing company, I would have laughed. I’m a finance guy, I majored in finance. But there’s also a big creative part of me — I love photography and art and things like that. But Filipe, his family moved to North Carolina from Hong Kong. He traveled over the world as a child and he has always had an interest in fashion. But we both wanted to solve problems in the industry. Also, even 10 years ago there weren’t a lot of brands with a story — it was all just generic. We want to be a brand that goes with a story. We want to create something that people are going to feel a connection to, in addition to providing great fit and quality. We also just love North Carolina, so hey, let’s make as much as we can in North Carolina.

OS: Is that why you chose to establish your business in Charlotte?

Rhyne: A big reason is that I grew up right outside of Charlotte, and got a job there after college. But I also think we saw something in Charlotte that seemed to be fitting. Granted, we went through the economic recession shortly after we got out of school, but by 2013, we had this unique opportunity where there was a big market in Charlotte but it wasn’t New York or L.A. It’s not too big of a market that’s already oversaturated in companies that do the same thing. So we’re really one of the first menswear companies headquartered here in Charlotte.

OS: Is there a different experience when it comes to shopping at your retail store versus online?

Rhyne: This is definitely something that I’m very passionate about, because everybody says brick and mortar retail is dying, or at least declining. I do think that’s true, but I believe that if you can create an experience and a reason for somebody to come to your store, then that’s what’s going to keep people from resorting to buying online. The customer that comes into our store gets one-on-one attention. People that work in the store are fully passionate and invested the brand, and are educated in menswear. We’ve got drinks, bourbon and scotch on hand, so guys can come in and just relax. We’ve got a vinyl record player and they can put on the record. We’re right in the middle of uptown Charlotte, so it’s kind of a haven for people to shop and relax and make conversation. They can enjoy themselves in an environment that’s sometimes not even about menswear. It’s essentially a mancave right in the heart of uptown Charlotte.

OS: Some consumers might feel the prices of Ole Mason Jar shirts are higher than competitors’ prices. How do you respond to those questions?

Rhyne: That’s very valid! How do you justify the price point to everyone? Some get it, but some don’t. But with our product, you are getting something that is locally made, sourced, and something that has a story. When you’re wearing that shirt and somebody compliments you on it, you’re actually able to tell the story of the shirt. So that’s one reason, and then the second reason I think would be the fact that we can make a shirt that fits well but it doesn’t have to be super snug, but fits better than something you’d get off a rack. It also has to do with the high quality of the fabric. So I think that if you have a competitive product next to our product, and you felt them side-by-side, you can see and feel the difference.

OS: What is the most rewarding part of running Ole Mason Jar?

Rhyne: It’s rewarding to be able to make our products here in North Carolina, and also giving back to the state. We support lots of different philanthropies here in Charlotte — Second Harvest Food Bank is a big one — constantly donating clothes, and things that like that. To be able to use this platform to actually at least make a little bit of a difference is pretty cool.

OS: What else would you like North Carolinians to know about Ole Mason Jar?

Rhyne: The main thing is that we hope to be viewed as the full embodiment of North Carolina. But I’d love for people to know that it isn’t a brand that is just for North Carolina either; it’s for everyone. I hope that’s something that we continue to grow and we can kind of be a flag bearer for North Carolina, and something our state as a whole can be proud of.