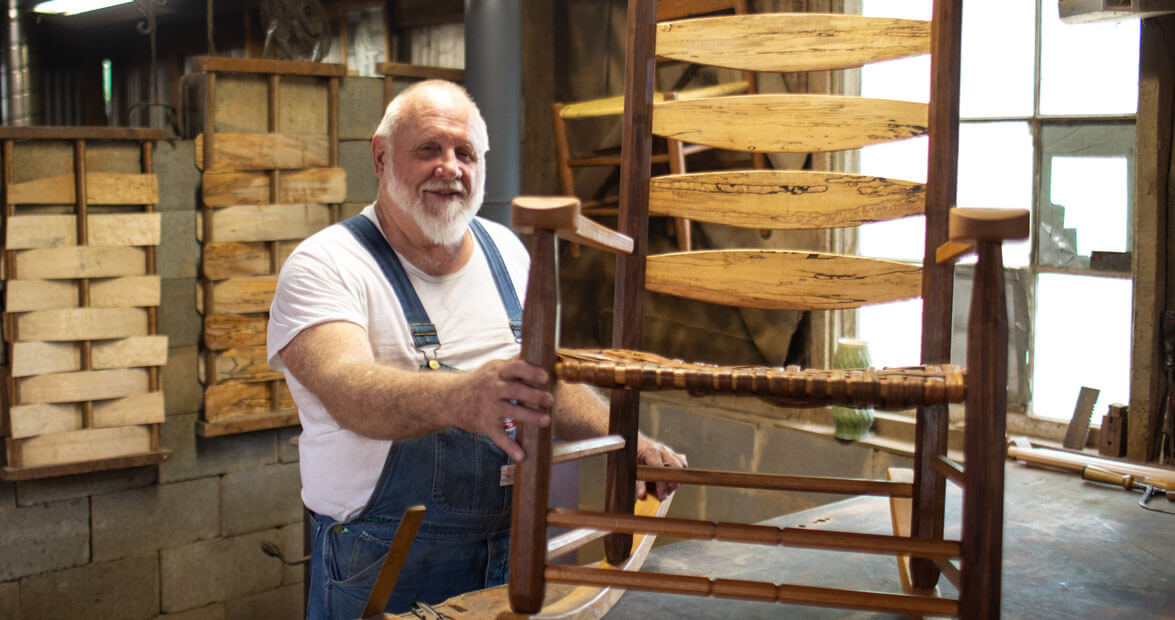 When he’s not out in the woods, you can usually find Lyle Wheeler tinkering in his Wilkes County woodworking shop. It’s in his blood, after all.

“I come from a long line of good ol’ boys that were makers,” Wheeler says. “Throughout history, they were blacksmiths, woodworkers, wagon makers, furniture makers. Growing up, they were always making something, and I saw it a lot as a young boy.”

But it wasn’t until the late 1970s, when he read a story on making chairs by hand in The Foxfire Book, that he fully connected with the trades that his family had practiced. In 1983, he began making rocking chairs in the traditional style — using hand tools from the late 1800s and native Appalachian hardwood. He soon sought out old-time chair makers in Wilkes County, who taught him more about regional-style seat weaving with hickory bark and white oak.

Today, he sells Wheeler’s Chairs at high-end craft shows throughout the Southeast, builds chairs on commission, teaches woodworking and blacksmithing at the John C. Campbell Folk School several times a year, and is a longtime member of the Southern Highlands Craft Guild. And he’s passing along the family tradition.

“I was guided by my family’s example more than anything,” Wheeler says. “I have some of the tools my great-grandfather used, and I use them every day. I have a grandson who has been introduced to those tools, so now there’s seven generations of us who’ve used the same saw.”

We talked to Wheeler to learn more about his passion for traditional chairmaking and his one-of-a-kind ladderback rocking chairs.

OS: What is your process for building a rocking chair?

LW: I start out with pretty lumber. When I look at it, I can see the chair at the end of the board. I can see what’s happening in all of the steps. I don’t use stain; I let the wood speak for itself. I do use a two-part finish of linseed oil and varnish, with a little bit of turpentine in there as a vehicle. I get the frame built, I put the finish on it, and then I weave the seat, usually with the bark of a hickory tree. Then I put finish on the seat and attach the runners and arms.

OS: Where do you source your materials?

LW: I use native Appalachian hardwoods; it’s the only material I work with. As Granddaddy would say, “If it doesn’t grow around here, we’re not going to fool with it.” I source my material at local sawmills, and I try to get as local as I can get here in Wilkes County.

OS: Why is it important to you to source locally?

LW: Around here, we’ve got the greatest abundance of quality hardwood trees in the world. They’re right around here, they’re grown here, and sometimes I know the people that fell the trees, sawed ’em, dried ’em. And I always know the people I’m buying from. If it keeps their sawmills going, it keeps our economy going here.

OS: What sets your chairs apart from others?

LW: My chairs are unique because I use a traditional style of work — hand tools, mostly. And I’m mixing up the species of wood. For example, walnut and maple go really well together. The mixture of the species and getting the contrast in the chairs is important to show off the quality and the desirability of the wood itself.

OS: What does making chairs in the “traditional style” mean?

LW: A particular philosophy I have behind my work is to work in a traditional style using traditional tools. It’s old-school. I’m stuck in the 1860s to 1890s as far as the tools, the technique, and the style of chair that I make. The hand tools from that period were the best quality that we ever had, right before the Industrial Revolution in the South, when tools began being manufactured by machines in factories. They mostly came from New England, some from the Southern states. They were the best quality tools that were ever made. They have not been excelled in since then. I search those tools out, and I use them exclusively in what I make.

OS: What makes one chair better than another?

LW: It has to do with the aesthetics of a piece, especially in a rocking chair. There’s a lot of engineering in a rocking chair that differentiates one from the next. The curvature of my runners — the radius that I use — has been developed so that when you sit down, it pulls you into the chair. Other chairs you could sit in and feel like they want to pitch you out — the radius is not correct. So getting one together is very gratifying in that you’ve accomplished a piece of art that has great utility.