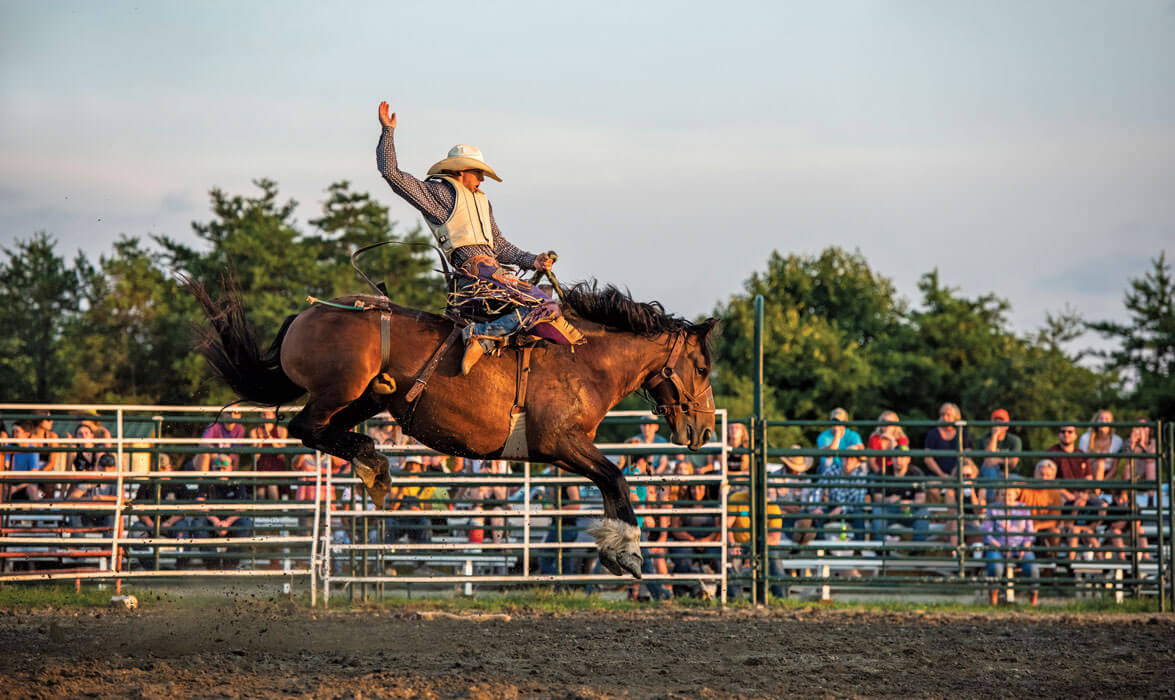 The bull wins handily. It’s really no contest. There’s maybe two seconds of wild, furious bucking, and then the cowboy is tossed easily from the bull’s muscular back, landing facedown in the dirt, his Stetson floating to the ground a few feet away. It’s not a fair matchup — that much is clear as the bull makes his victory lap around the ring, charging and snorting, running close to the green fencing that separates the fans from the action. When he gets close enough to the fence to kick up mud on the spectators in the front row, you begin to comprehend just how large this animal is. Maybe 1,500 pounds, just shy of a ton, built like a commercial refrigerator with legs and horns. Do the math, and you realize that the 150-pound cowboys don’t have a chance. And yet they line up, one after the other, eager to get their shot at the impossible task of riding this wild animal for eight seconds.

The bravest of them all will ride bucking broncos and wild bulls, trying to hang on for eight seconds.

It would be easy to mistake the scene for small-town Wyoming, or maybe even some sort of Hollywood interpretation of a time and place when men and women still rode horses and worked ranches, but this is the Madison County Championship Rodeo, the longest-running rodeo in North Carolina. Here, in a rare flat spot among the steep, green mountains surrounding Marshall, the cowboy way is alive and well.

“Rodeo started with a group of cowboys on different ranches, showing each other how they doctored their cattle,” says Kenny Treadway, a ranch owner and third-generation “rodeo man” who produces the Madison County Championship Rodeo. His grandfather and father put on the first version of this show in Marshall more than 50 years ago. “The roping events, that’s how you’d give an animal medicine. Wild horse riding came from breaking horses. It’s a Western tradition we like carrying on.” 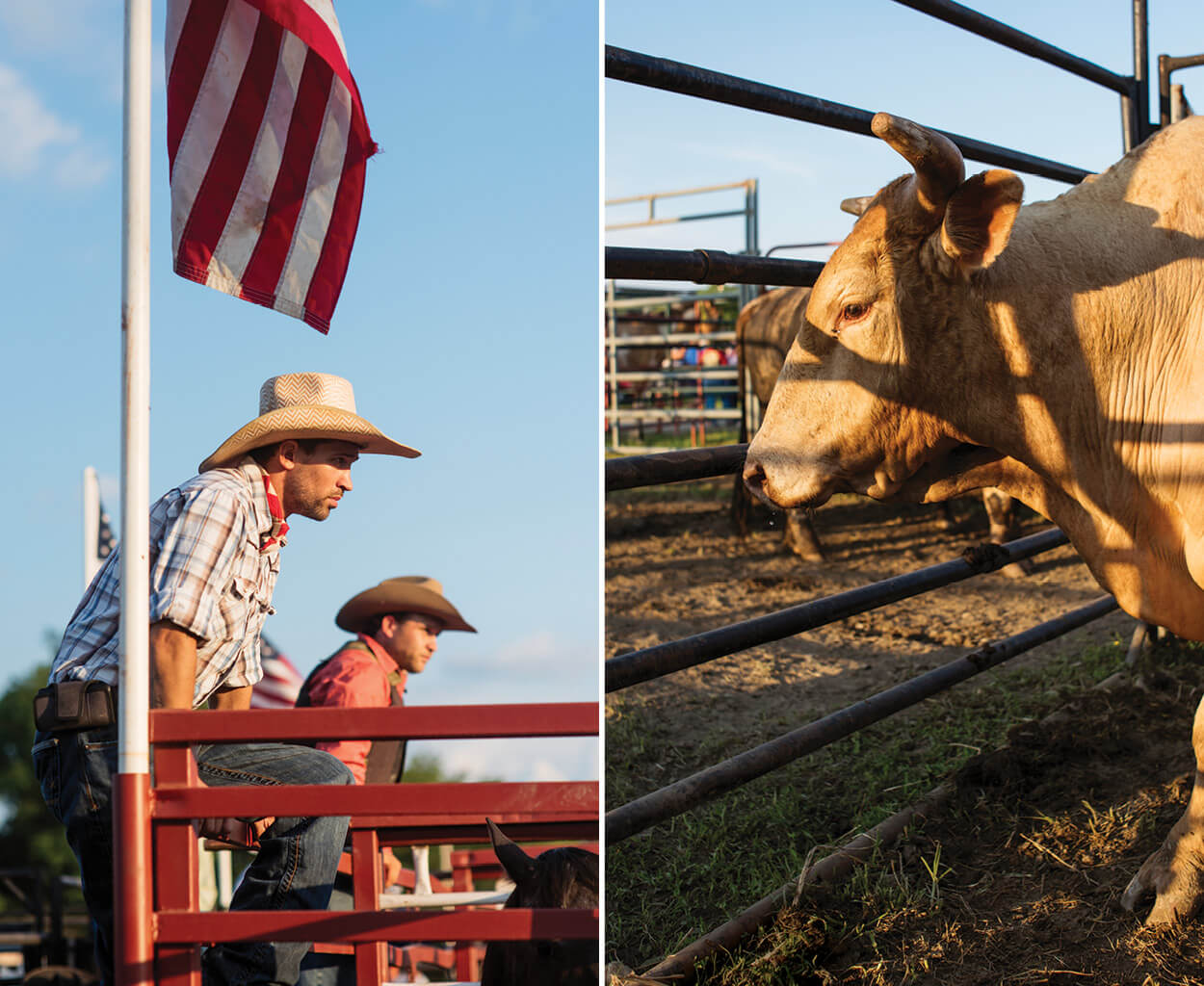 A typical night at the rodeo might include eight to 10 events, each designed to showcase riders’ skill in roping, wrestling, racing, and more. All of the events are exciting, but perhaps none more so than the bull riding, for which Brandon Presnell (opposite) has earned a champion belt buckle. photograph by Jack Sorokin

The Madison County Championship Rodeo begins with a prayer and a young woman riding a galloping horse around the ring, blonde hair flowing behind her and an American flag flying above her head. All of the cowboys participating in the rodeo stand in the middle of the ring, their hats pulled down low. Their jeans are dusty, their vests covered in sponsorship patches. There’s a full slate of events on the docket for the night. Little kids will ride sheep, women will race barrel horses, a few men will try to wrestle steers to the ground, and the bravest of them all will try to ride bucking broncos and wild bulls, doing their best to hang on to the beasts for eight seconds.

“Think about cowboys back in the day, talking about how they could ride any animal with four legs and hair,” Treadway says. “And one says, ‘Let’s see you ride this bull here.’”

Cowboys are still challenging each other in the same way today, and they’re doing it all over North Carolina, which has a proud professional rodeo pedigree. Most spring and summer weekends, the Southern Rodeo Association hosts competitions throughout the Carolinas and into Virginia, Tennessee, and Georgia. Treadway can rattle off half a dozen professional cowboys who cut their teeth at North Carolina’s rodeos. J.B. Mauney, one of the greatest bull riders of all time, is from Mooresville and did his time in the Southern Rodeo Association. 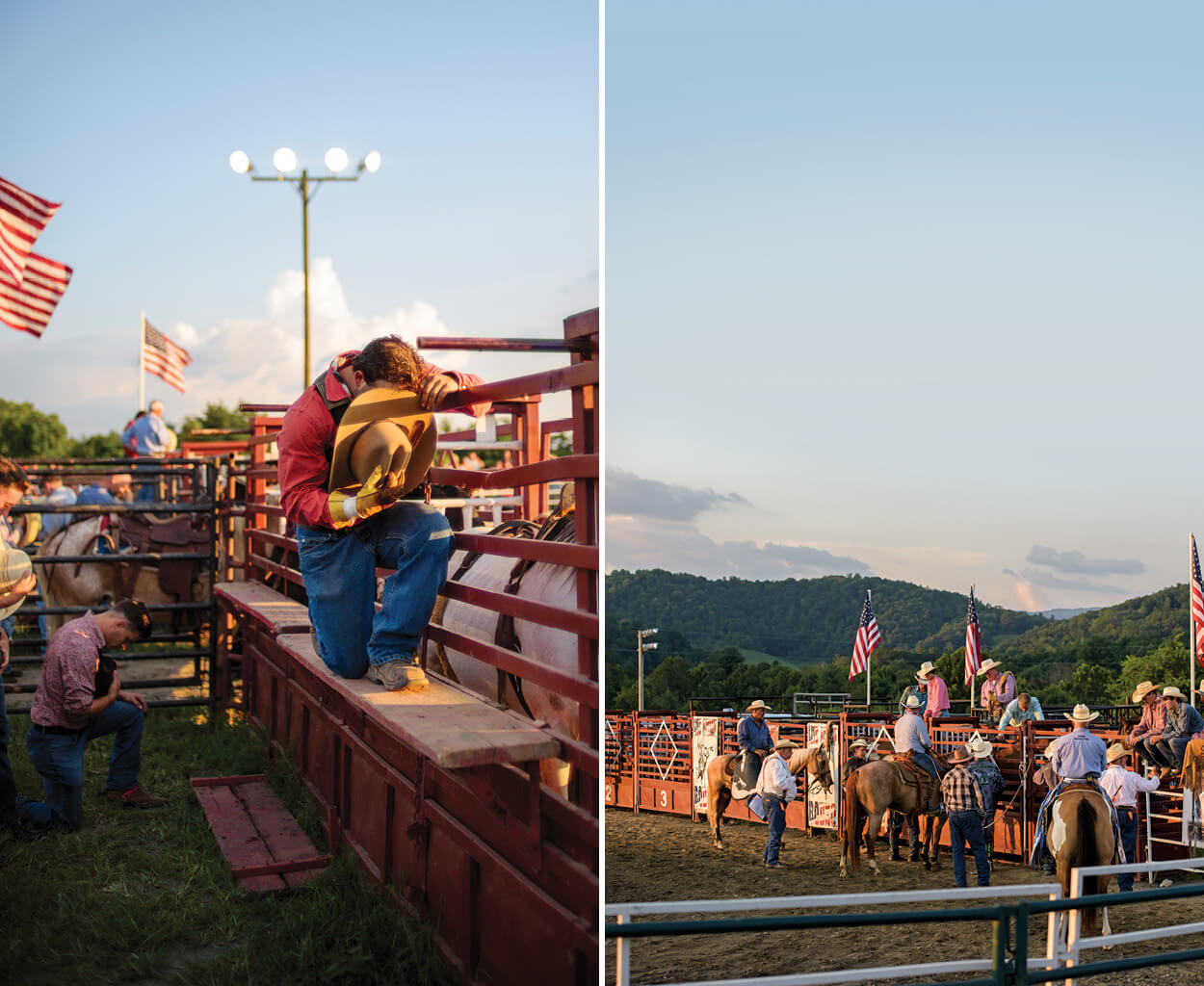 The rodeo kicks off at 7:30 with the introduction of the cowboys and the American flag. Then, a hush falls over the fairgrounds as riders and spectators bow their heads for a group prayer. The first rider of the evening takes a knee on the back of the chutes, where he’ll soon mount a bucking horse. photograph by Jack Sorokin

Small-town rodeos like the one in Marshall aren’t affiliated with any professional association, but they offer a place for young cowboys to ride, perfect their skills, and maybe win a little money.

“It’s like minor league baseball,” Treadway says. “This is where kids go to see if they have what it takes to be pros.”

Stephen Hall was one of those kids who came up through the Marshall rodeo. He honed his skills on some of Treadway’s toughest bulls until he was good enough to earn sponsorships from Western-wear stores and hit the professional rodeo circuit, traveling six months out of the year from West Virginia to Oklahoma and down to Florida.

“A bunch of us started doing it in high school,” Hall says. “We traveled in a Ford Windstar van and picked up stragglers along the way. At one point, there were 19 cowboys staying in a two-bed motel room in Kentucky. We’d do four rodeos in a row, then head home Monday. You lived fearlessly, and you lived out of your car.”

The Madison County Championship Rodeo is full of young cowboys just beginning their own journeys into the rodeo circuit. They have a short window to achieve success: The act of riding broncos and bulls is so hard on a person’s body that most cowboys give it up by their early 30s. It’s a young man’s game, Treadway says. “When you get older, you just don’t bounce anymore.”

Hall, a former helicopter mechanic, is an Army recruiter now. He recently retired from riding bulls after a series of injuries culminated with a fractured vertebra when a bull came down on his back. But he still remembers the first time he got on a bull. “It was scarier than going to Afghanistan,” he says. “It only lasted two seconds, but I was hooked. You’re getting on a 2,000-pound animal and cutting loose. You can’t top that adrenaline rush. Some people turn to drugs, but my drug is bull riding. It’s addictive as all get out.” 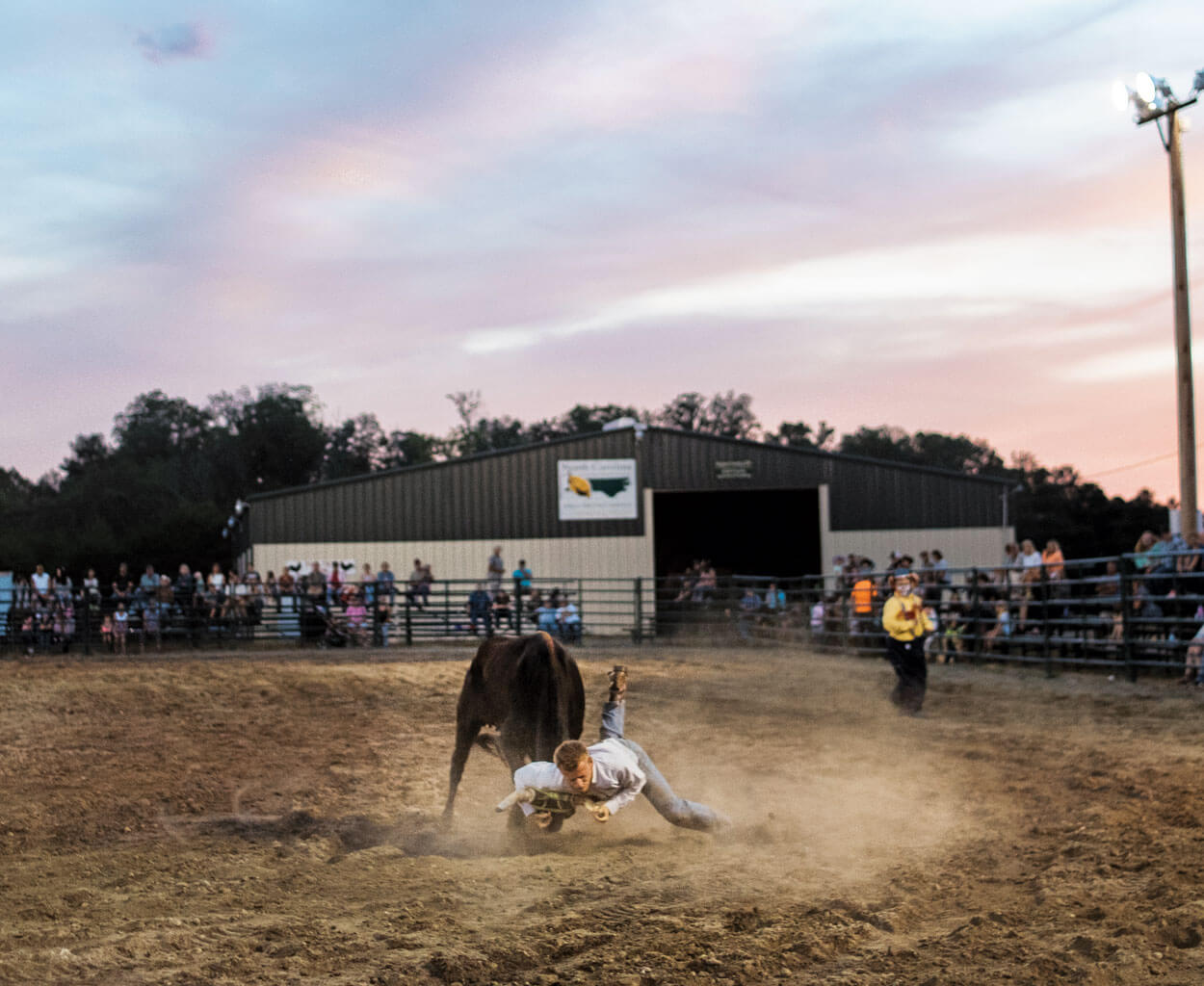 Tonight is a slow night at the rodeo, with maybe 100 people in the stands. There was a flood in the concession stand building, so Treadway improvised and commissioned a couple of teenagers to sell cans of Cokes and candy bars out of the back of a truck. Between the events, a rodeo clown named Cowpaty entertains the crowd. 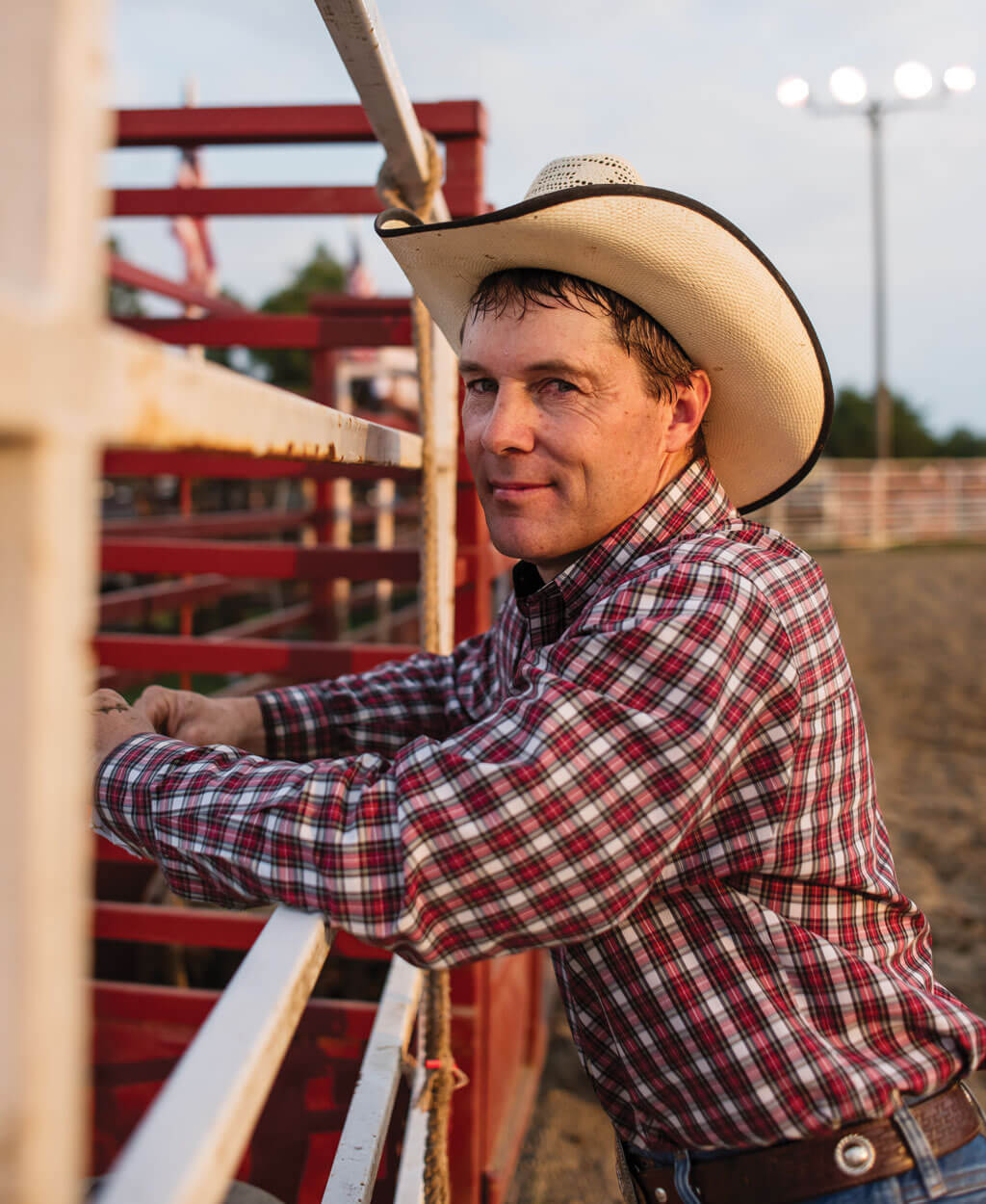 Kenny Treadway has been steeped in cowboy culture for as long as he can remember. His father and grandfather started this rodeo on the Fourth of July more than 50 years ago. Today, Treadway is proud to preserve Old West traditions like bronc riding, which began as a way for cowboys to showcase their skill in breaking wild horses. photograph by Jack Sorokin

Three or four cowboys take their shots at various bulls, and none of them are particularly successful. They’re each quickly bucked off, and as soon as they hit the ground, other men, called bullfighters, work to distract the animals, giving the cowboys a chance to get to safety. Justin Gurley is one of those bullfighters, regularly putting himself between bull and cowboy after the rider gets bucked. Gurley, who lives in Yancey County, grew up in the rodeo and was riding bareback horses and bulls by the time he was in his early teens. “My uncle had this young colt that I was dying to ride,” he says. “He bucked me off, and I thought that was the funnest thing ever.”

Gurley spent some time riding broncos, but before long, he found his place as a bullfighter. “I’m insurance for the cowboy. It’s a rush, just like riding a bull. For about 90 seconds, it’s just you and the bull, and you’re trying to get as close as you can to the animal without getting hurt. You gotta be willing to take a hooking for anybody.”

What does it take to be a good bullfighter? “A lack of sense,” Gurley says.

The bronc riding goes a little better than the bull riding. Instead of bullfighters jumping in to distract the wild, victorious bulls, there are “pickup men,” stern-looking cowboys with pressed shirts and white Stetsons riding horses of their own, ready to wrangle a bucking bronco that casts off its cowboy.

What does it take to be a good bullfighter? “A lack of sense,” Gurley says.

If it’s the bull’s size and strength that make bull riding so impressive, then it’s a bronco’s speed and ferocity that get your attention. These horses can be smaller than the pickup men’s horses, but lightning fast and full of so much pent-up energy that they leap off the ground. A couple of cowboys are able to hang on to their broncos for the full eight seconds, making it to the whistle. The most impressive is Levi Robinson, a 21-year-old from Burnsville who rode his first bull the day he graduated from high school. “I figured there was no better day to do it than the day you graduate,” Robinson says. He quickly moved to riding wild broncos, which is a little more technical than riding bulls, he says, but the adrenaline rush is the same. “You’re on a 1,000-pound animal that’s trying to knock you off. It’s impossible to explain. It’s like trying to tell someone how to drive a car. Until you do it, you just don’t know.” 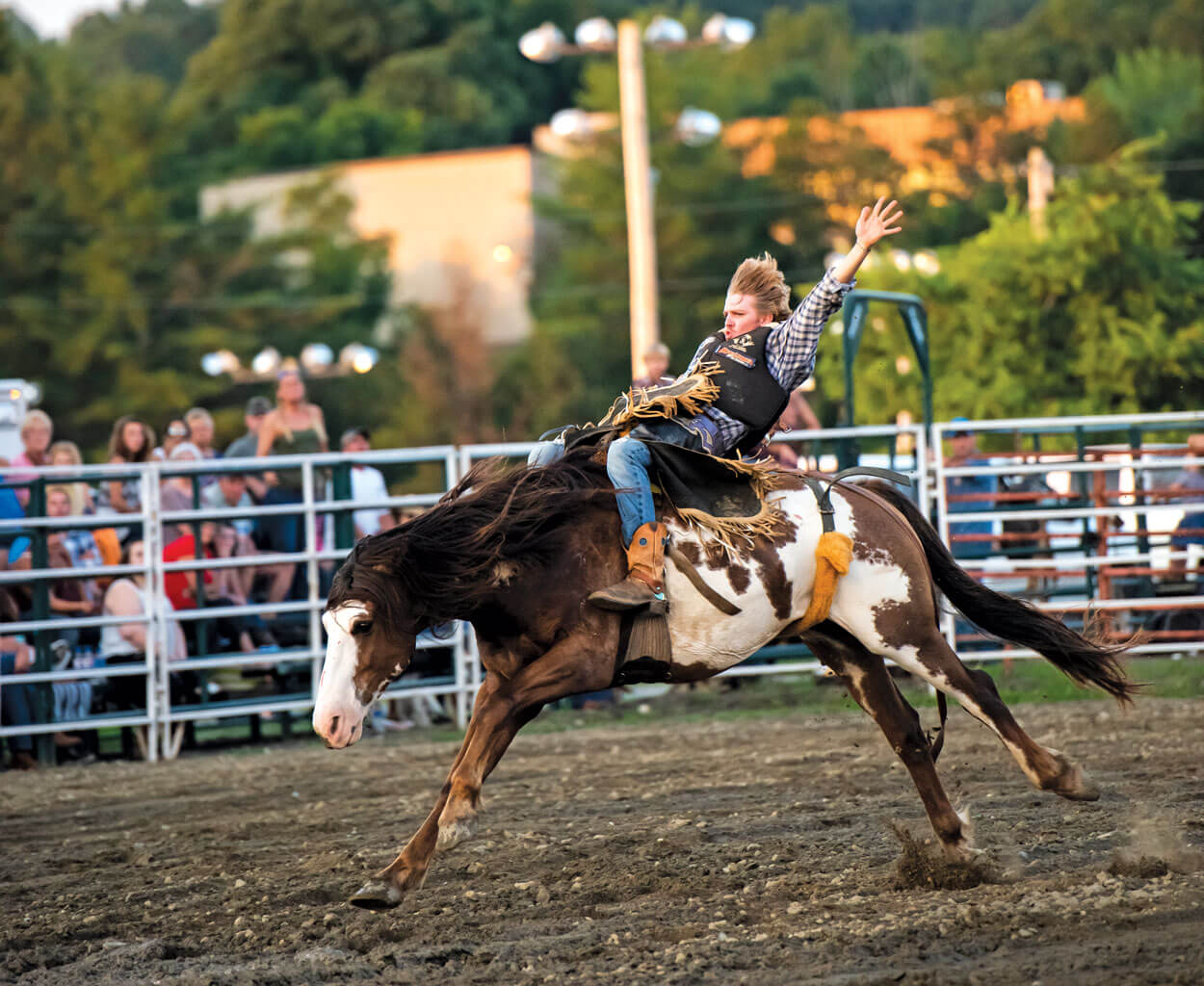 Last year, Tyler Stroud took home the champion belt buckle for bull riding. He rides broncs, too. In both events, he must keep one hand in the air — no touching the livestock, the rigging, or himself. Skill and bravery like his bring generations of locals back year after year. “The people of Madison County have always supported this rodeo really well,” Treadway says. photograph by Jack Sorokin

Robinson was a football player in high school and gravitated to rodeo to fill that competitive space in his life. “I’ve never done anything harder. To ride a bronc right, and stay on for eight seconds, there’s not much I could compare it to.”

He’s the current points leader in the Madison County Championship Rodeo, which means he’s stayed on his broncos for longer and used his spurs better than anyone else he’s competed against throughout the season. He’s good, especially considering that he didn’t grow up riding like most of his competition, but he has no aspirations to turn pro. Like most of the cowboys here, Robinson may have been drawn to the rodeo because of the adrenaline rush, but he stays in it because of the culture it represents.

“Some of the rodeos you go to, you find people who are there just to say they’re a bull rider. They’re in it for the money, or to prove something,” Robinson says. “But the rodeo in Marshall is full of farmers and cowboys. They’re not about the money or the spotlight. It’s about cowboy culture and keeping that culture alive for the next generation.

The Madison County Championship Rodeo’s regular season runs through October 5. Events are held every other Saturday at 7:30 p.m.