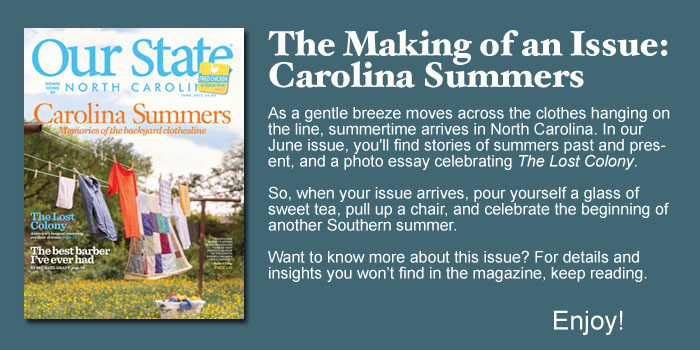 As a gentle breeze moves across the clothes hanging on the line, summertime arrives in North Carolina. In our June issue, you’ll find stories of summers past and present, and a photo essay celebrating The Lost Colony, America’s longest running outdoor drama and the keeper of the story of North Carolina’s first settlers. So, when your issue arrives, pour yourself a glass of sweet tea, pull up a chair, and celebrate the beginning of another Southern summer.

The Other Side of the World

We receive dozens of story ideas every month at Our State magazine. The editors discuss each one to see which might make it through to the next phase of publication. Most are good ideas, but many get weeded out because we’ve done them in recent issues. This month, though, writer Jeremy Markovich came to us with something we’ve never heard of – the idea of following a line across the ocean to find out what’s on the other side. We agreed, and within a few weeks, Jeremy introduced us to Malika Squalli – from a small town in Morocco, directly across the ocean from Carolina Beach – and he told a great story that made us think differently about the other side of things. Exclusive video: Hear more from Jeremy Markovich about writing this story.

In our business, we tell true stories. So each of the articles that you see in the magazine goes through an extensive fact-checking process. For Michael Graff’s story on barbers, he had to make a call to his mom to check his facts. She reminded him of the spelling of some of his childhood barber’s names, and even reminded him of a few he’d forgotten. And in this case, she went one step further. As you read his story, you’ll notice a photo of Mike in the barber’s chair, getting his very first haircut. Just goes to show, like Mike’s story says, we can always count on mom.

Following a career in advertising and commercials in New York, George Cochran, featured in this month’s Carolina Culture department, moved to North Carolina and began teaching photography and film at Central Piedmont Community College in Charlotte. When he transitioned from still photography to film, the first project he produced was a film about himself going into film, which he made for $75,000. It was a hit, and from it he launched a new career.

Battening Down the Hatches

As you’ve read here before, many of our stories are researched and written months before they’re published. Leah Hughes visited Atlantis Lodge in Pine Knoll Shores last August, at the height of hurricane season, and with Hurricane Irene in sight. “It was interesting to watch people prepare for the hurricane,” she said. “You would think that they would be rushing around and frantic, but they calmly did what they needed to do — boarded up windows, brought in patio furniture, secured boats — just like it was another day.” Irene hit land a day after Leah left Pine Knoll Shores, and while it took out a pier just down the beach from Atlantis, the lodge itself did not sustain much damage.