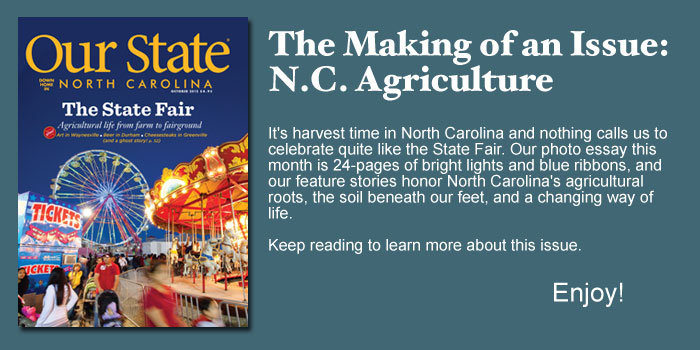 When Scott Huler’s story on soil arrived, it became the job of Associate Art Director Joseph Edwards to figure out how best to represent the complexity of North Carolina’s dirt. He called scientists at the North Carolina Department of Agriculture, who promptly shipped him soil samples. From those, he and photographer Matt Hulsman developed the soil sculpture you see as the opening spread in the story. Click the left and right arrows on the slides below to see behind-the-scenes at the photo shoot.

The dirt beneath our feet

Our State‘s editors are constantly traveling the state looking for story ideas. The best ideas for the stories come from stepping out from behind the desk and experiencing life in North Carolina. When this agriculture issue was in its infancy, Editor-in-Chief Elizabeth Hudson and Associate Editor Leah Hughes made a trip to Greene County to better understand farming life and how it is changing in North Carolina.

While on that visit something else also happened. Standing in a field, Elizabeth reached down and picked up a handful of dirt. A eureka moment followed as she thought about the soil of North Carolina and how different the sandy loam of eastern North Carolina is from the red clay of the Piedmont. She snapped a photo and sent a tweet. Almost immediately, writer Scott Huler tweeted back that he, too, had been thinking about the soil. In fact, he’d become a little obsessed with it, sharing with Elizabeth the fact that there are more than 500 different types of soil in North Carolina alone. From that interaction, the full story grew. That tweet is below and the story is on page 140 of the October issue. 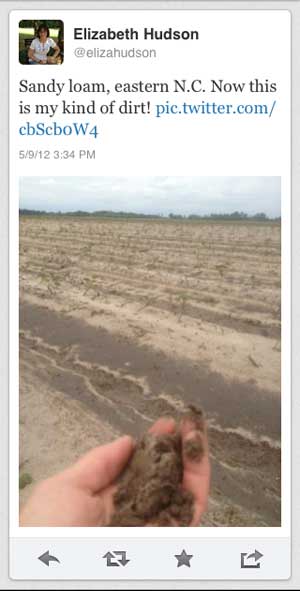