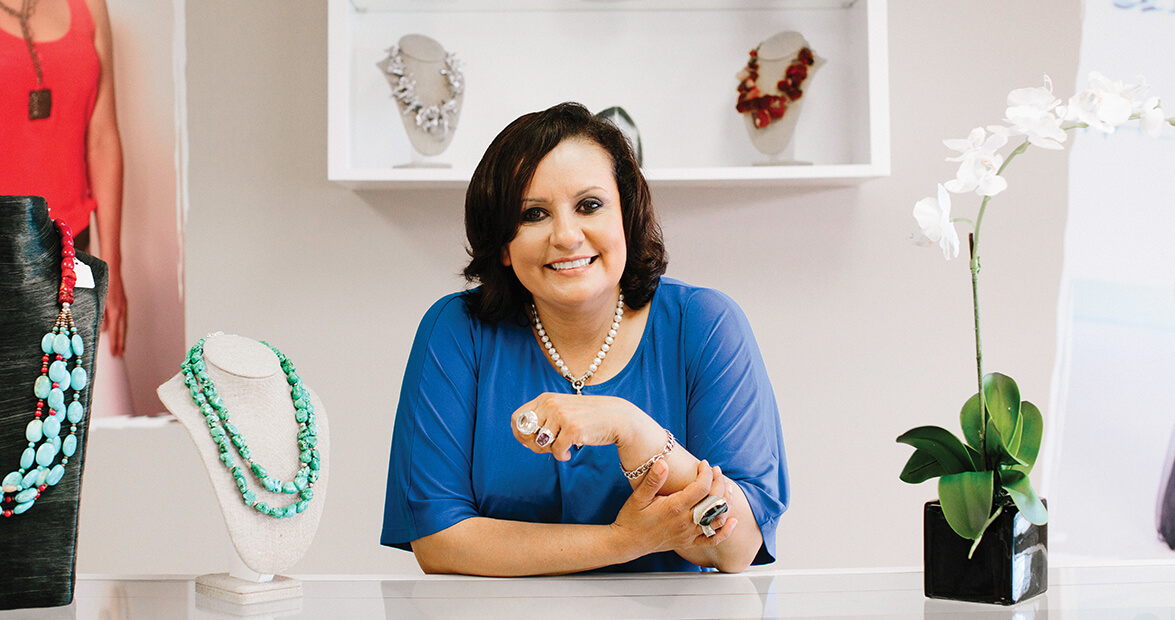 She stood there at the ritzy Hollywood party with her mouth agape, surrounded by celebrities and face to face with Joe Mantegna as the veteran actor raved about her work and promised to put it to good use.

“I can’t believe this,” Ileana Rojas-Bennett thought to herself as she smiled at Mantegna. “What is going on in my life?”

What was going on was overnight success. And it only took 20 years.

Rojas-Bennett, a jewelry artist from Costa Rica, is connecting the worlds of high fashion and showbiz to the Greenville suburb of Winterville, where she operates a small, downtown storefront with an ever-growing reach.

But Maleku Jewelry is about more than glitz and glamour. Rojas-Bennett has used money from sales of her gemstone-and-metal rings, earrings, bracelets, necklaces, and cuff links to help members of Costa Rica’s dwindling Maleku Indian tribe, from which she is descended. She has already brought running water to one of the tribe’s villages and is working on a second.

“When you actually do things from your heart,” she says, “you can do amazing things.”

Rojas-Bennett, a former Spanish teacher who still teaches part time, has only been making jewelry since 2007, when she got started by taking a basic jewelry-design class at Pitt Community College. That followed two decades of dabbling in cake decoration, stained glass, and fused glass as she attempted to master a marketable artistic avocation.

This one has caught on.

On the red carpet

When five of her pieces were selected, Rojas-Bennett was swept into the fashion industry. From the Miami show, she was invited to supply pieces for a similar function in New York.

She has since had her work featured on runways the world over.

Kerry Bannigan, CEO for Nolcha, an advocate for independent designers, says her success is not just because of the jewelry.

“It’s the constant persistence,” Bannigan says. “She’s in the right places. She also has a story behind her product.”

Perhaps the biggest break came when, on the recommendation of celebrity stylist Spry Lee Scott, Rojas-Bennett was asked to provide jewelry items for the swag bags given to stars at this year’s Academy Awards. She and part-time assistant Vicki Ebert worked night and day to make 165 gemstone-and-pearl bracelets, in addition to specially designed necklaces and cuff links, in time for the Oscars.

Conservatively, Rojas-Bennett estimates she gave away about $35,000 in products and labor.

The results were immediate. Members of the cast of Argo wore her cuff links as they went onstage to accept the Oscar for best picture. Cas Anvar, one of the film’s cast members, recently tweeted @malekujewelry: “Emerald cuff links are stunning. I can’t wait for the right outfit and occasion to put them to good use!”

Rojas-Bennett’s shop sits one turn off of Main Street in a town of about 8,500. She married a North Carolinian she met during what was supposed to be a three-year teaching exchange in 1993. She has no plans to move unless her business outgrows her space.

She stays involved locally by teaching eighth-grade Spanish at Arendell Parrott Academy in Kinston and by providing free jewelry-design instruction to area students.

“North Carolina is my home,” Rojas-Bennett says. “It’s like I always tell people: I’m half from Costa Rica because I grew up there, but I did all my career here.”

The star-generated PR has proven invaluable for both Rojas-Bennett’s business and her cause. She visits the Maleku tribe as frequently as possible to provide much-needed supplies while reconnecting with her heritage.

As she sees it, the two pursuits complement one another.

“Some of the celebrities will take the jewelry to a point that whatever they wear, other people are going to want,” says Rojas-Bennett, who has already been invited back to next year’s Oscars. “And that’s what, in the end, you want if you want to help and do the things that I want to finish doing.”