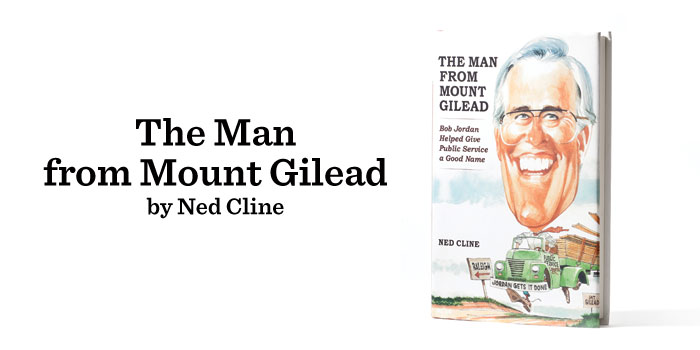 Many of North Carolina’s most memorable political leaders come from small, rural communities. Recent examples include Jim Hunt, Jesse Helms, Terry Sanford, Sam Ervin, and Kerr and Bob Scott. The Man from Mount Gilead, a new book by veteran newsman Ned Cline of Greensboro suggests that Robert B. “Bob” Jordan should be on that list.

Following his 1954 graduation from North Carolina State University and military service in Germany until 1957, Jordan devoted his career to public service — first on the Mount Gilead Town Board, then as chairman of county planning, as UNC trustee, and later as a founding member of the UNC Board of Governors, then as a state senator, as lieutenant governor, and finally as the 1988 Democratic nominee for governor.

He didn’t win the governor’s race against Republican Jim Martin, but he made his mark as a man of principle, integrity, decency, responsibility, candor, and compassion by helping maintain North Carolina’s reputation as a “progressive plutocracy.”

The book traces Jordan’s family roots; extols the serenity of rural Montgomery County and the folksy congeniality of Mount Gilead; chronicles Jordan’s education achievements and his marriage to Sarah Cole of Raeford; details his expansion of the Jordan family’s fledgling lumber business into a Southern powerhouse; and cheers his rise up the ladder of local, state, and national leadership.

In the process, it also sketches the many political personalities who contributed to North Carolina’s steady transition from a 1950s bastion of Democratic dominance to today’s rousing two-party battleground.