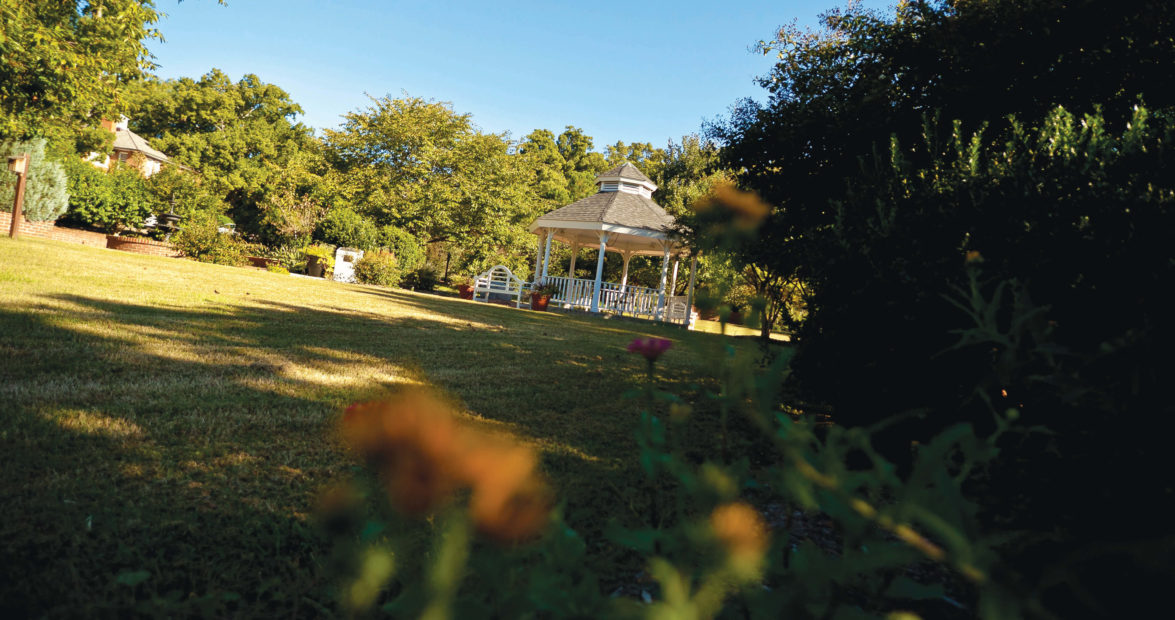 On sunny days, Lori Blake leads a handful of children down the redbrick path of the Martha Franck Fragrance Garden, guiding them through a burst of roses, lilacs, and asters swarming with bumblebees.

As their science teacher, she rarely describes the blooms as pink, purple, lush, or vibrant — even when the plants grow six feet tall and drop petals in her hair. She doesn’t ask the children to consider whether a real monkey might enjoy jumping into monkey grass, or how an oversize leaf can look just like an elephant’s ear when it flaps in the breeze.

The children Blake shepherds through the plants were born blind, became blind, or see the world as a sliver of light.

To students at the Governor Morehead School for the Blind in Raleigh, a flower isn’t something you arrange in a vase or pin to a lapel. It’s a keyhole that leads into the outside world, a curiosity you turn over in your hands to feel the smoothness and moisture. It’s something you bring to your nose to understand the difference between sweet and bitter.

So when Blake takes her students on outings to the garden’s leafy middle, she’ll pick a crape myrtle pod and crack it over their hands, letting the seeds trickle through their fingers. She’ll pull up a sprig of rosemary and split it, filling the air with the kitchen-cooking scent of focaccia bread. She’ll take them to a limestone sculpture and have them run their hands over the cool, white rock, and if they flinch at the sound of passing traffic, she’ll reassure them with, “Sweetheart, we’re 25 feet from any cars.”

In the middle of central Raleigh, with a railroad track just at the edge of campus and a pair of busy streets near enough to hear backfiring cars, blind children find safe space to explore at their leisure.

On an autumn Wednesday, Blake leads a pair of low-vision students under low-hanging crape myrtle limbs and asks them to find signs of autumn.

“Here’s some of the seed pods still sleeping on the tree,” she tells 16-year-old Nick, who laughs and shakes a branch, showering Blake with pods.

Blake laughs back. “No telling what’s in my hair now! Nick, want to knock on the birdhouse?”

He follows, his footsteps eager and sure.

In 1935, the Alabama activist had long since overcome the deafness and blindness that left her almost without language as an infant and graduated with a bachelor’s degree from Radcliffe College — then a women’s annex for Harvard University. By the time she came to Raleigh that year, Keller had blossomed into a celebrated lecturer and writer, speaking nationwide on behalf of women’s suffrage, worker’s rights, and aid for the disabled.

One person in the audience for her Raleigh speech was Martha Franck, a garden club leader from Durham. With her halting voice, Keller planted a seed in Franck’s brain. Over and over, Franck dreamed of a traveler searching for a flower based only on its smell. As the dream persisted, an idea grew. She would create a new garden for the blind, a place that would let the sightless experience the natural world through scents, sounds, and textures.

Garden visitors see Franck’s enthusiasm today, chiseled on a black wall in the garden that shares her name: “O God of the open air! …” begins her poem. “In the garden we walk with thee.”

Franck’s garden opened in 1960 at its original location, the Adult Rehabilitation Center for the Blind in Butner. Now in Raleigh, it continues to grow through a partnership between the Governor Morehead School and the Garden Club of North Carolina. That cooperation proved vital after the Adult Rehabilitation Center moved to Raleigh in 1984, leaving the garden behind in Butner. In 1996, the sanctuary for the blind got another boost, this time from Hurricane Fran.

After the storm flattened several large trees on the Morehead School campus, garden club members agreed to make a new Martha Franck spot in Raleigh their top project. As the project chairman in Whiteville, Sara Brooks recalls visiting similar gardens all over the country, including Niagara Falls, and scouring horticulture books for ideas. But the goal was clear: create a feast for all five senses.

“When you pick a flower or a leaf, you’re going to bring it right to your nose,” she says. “Fragrance comes in different ways: the roots, flowers. After a nice rain, it can really smell. It can really make the fragrance pop out.”

Donations poured in. Brooks often came home and found a box of gardenias on her front step. She still loves the banana shrub in the Martha Franck garden, which smells like bananas well into autumn, and the lilacs, grown tall in the decade since she planted them. But when the garden opened at the Morehead School in 2001, Brooks’s most precious memories came from people rather than plants.

“I was sitting on the grass with some of the kids,” Brooks recalls, “and I said, ‘We’re the ones who fixed the garden for you.’ They said nothing and took my arm. They couldn’t see me, but they could feel me. They’ll get next to your heart.”

Opened in 1845, the Governor Morehead School is the eighth-oldest school for the blind in the country, and most people in Raleigh have never been to its campus. Few residents could tell you that a bust of Helen Keller stands there now or that 54 children attend class on the campus, hidden between Hillsborough Street and Western Boulevard.

One challenge with blind children is getting them to move, let alone explore, says Barbria Bacon, director of the Morehead School. They stick to familiar territory and move tentatively through it. A train whistle is so much louder to a child who can’t see, a car’s squealing tires so much more foreboding. Walking outside is often like walking into a stranger’s house in the dark.

“If you close your eyes,” Bacon says, “you hear things buzzing around you. You hear the wind. Some visually impaired children are even afraid of the wind. These are all things you want them to experience, and to experience while feeling safe.”

In the garden, children learn to navigate the path by the feel of brick on a tennis shoe. They step onto the grass — softer, squishier — and they know they’ve wandered off course.

With a teacher’s help, blind students rub the leaves of a hardwood tree, stroke the bark of a pine, feel the grit of a concrete wall or the cold smoothness of a limestone sculpture. They sit on a bench and hear a mockingbird’s cry or notice the legs of a moth as it lands on their arms. They pick a sprig of rosemary, then sage, and recognize how the first sprig smells so much more pungent.

The world takes shape inside the Martha Franck Fragrance Garden, inviting a curious mind to take inventory of its variety. What if you had never seen a tree and had to learn its qualities by hand? What would you make of a thick trunk as you wrapped your hands around it or the ruts in its bark as you traced them with your finger?

Not long ago, Blake led her students through the garden and asked them to take photographs. Many of the children held a camera for the first time, and Blake offered hints on how to hold it, how to aim it, how far away to stand.

She displayed the results in the hallway outside her classroom: a portrait of the white gazebo, a picture of the sun shining between magnolia leaves, shot by teenage Nick.

Blake entered the photos in the 2010 national Rachel Carson Sense of Wonder Contest put on by the United States Environmental Protection Agency, and their work appears online along with their names: Cassidy, Louis, Nicholas, Wenisha, Regis, Katelyn, Kimberly, and Celso.

Note especially the poem by Louis, age 14, who describes his experience in the garden. Blake shows it off like it’s her own son’s art, stuck to the refrigerator with a magnet:

A lot of leaves fall on me,
While I’m standing under an oak tree.
I hear birds chirping up in the sky,
I wish I could see them with just one eye.
I hear the leaves all falling down,
I touch the grass and plants.
I feel something crawling on me,
I think it may be ants.

Louis can’t see the trees, the sky, the leaves, or the bugs, but they speak to him inside the garden — ambassadors from a larger, richer world.