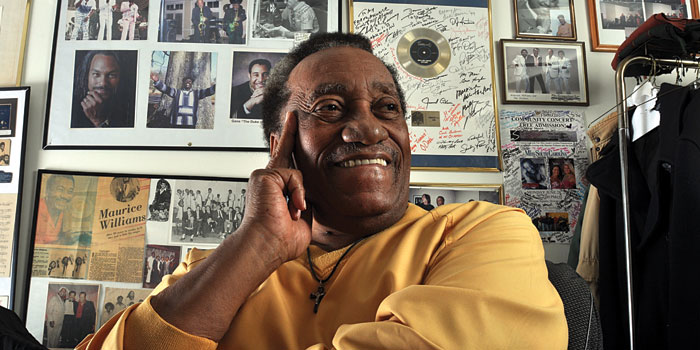 Maurice Williams was desperate to keep Mary Shropshire’s company, begging and pleading with his sweetheart to extend the night’s courtship.

But in 1950s America, 10 p.m. meant it was past time to go their separate ways. No more sharing hopes and dreams. The teenagers needed to head home or face the wrath of their parents.

Williams wished the evening didn’t have to end so soon, but he found inspiration in his frustration. Putting his feelings to paper, Williams’s words became “Stay,” a 97-second, chart-topping hit and beach music staple.

“(Mary) was the one I was trying to get to stay a little longer,” says Williams, 74, who lives in Charlotte. “Of course, she couldn’t. So I got up the next morning and wrote ‘Stay.’”

Top of the Billboard

Churning out a hit record required inspiration and determination, which Williams needed to get the tune right. The lyrics needed clarity: Were they too sappy? Maybe they were too strong. He filled his trash can with wadded sheets of paper. Mary’s younger sister — a precocious 8-year-old — loved the tune.

“What happened to that song with the real high part to it?” she asked.

The sister was an avid music fan and record buyer. If she liked it, maybe there would be more like her. Williams shopped the song to Ember-Herald Records in 1960, where owner Al Silver demanded a condensed version with a flat introduction, reasoning it would earn more airplay and grow on DJs and listeners. “Stay,” with Shane Gaston’s falsetto striking the signature note, is the shortest song to reach the top of the Billboard charts. More than 50 years after its debut, the song sticks with listeners.

Even as a kid, Williams wanted to be successful in music. He was an eager student and learned to play piano at 10 from his sister Carol. His skills and personality drew neighborhood kids to impromptu jam sessions at his home. Like many African Americans who migrated to secular music, Williams honed his skill in church, but his real talent was song writing, and he developed it at every opportunity.

Williams, the last of the original Royal Charms (who later changed their name to The Zodiacs), is best known in the United States, and “Stay” is his masterpiece. More than 8 million copies of the 1987 movie sound track for Dirty Dancing include the tune. The Who’s Who of music icons, including The Four Seasons, Jackson Browne, and Cyndi Lauper, have recorded the song.

“Stay” isn’t Williams only claim to fame. “Little Darlin’,” an ode to Shropshire he wrote at 15, landed the Royal Charms a deal with Nashville-based Excello Records in 1956. The song peaked at No. 11 on the R&B charts with the Royal Charms and went to No. 1 on the pop chart for the Diamonds, a Canadian band. It later made the movie sound tracks of American Graffiti and Ishtar. Another tune, “May I,” written in 1964, was also a hit.

Since his first hit, Williams has toured Asia and Europe and still draws a large audience. But he’s lived in the same home in west Charlotte since 1965 and plays piano at New Emanuel Church of Christ. Fans walk up to shake hands or share stories about how his music has touched their lives.

“It’s fantastic,” Williams says. “It makes you feel good to be part of that time, especially to have something last that long.”

He and Mary Shropshire didn’t last long — she’s now a teacher in Augusta, Georgia. But Williams still tours the country and croons the song that made him famous.

Herbert L. White is editor of The Charlotte Post. His most recent story for Our State was “Piano Lessons” (December 2010).