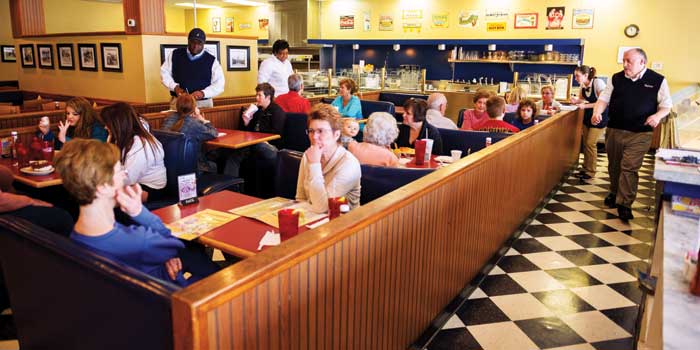 It’s noon on a Saturday — although, honestly, it could be most any day of the week — and 97-year-old Helen Starnes has her mind on lunch.

Today the High Point woman will eat at an old favorite, Mayberry Ice Cream Restaurant, where she hasn’t dined since, um, yesterday. She’ll have a grilled cheese sandwich on sourdough bread with potato chips and wash it down with a glass of ice water. She’ll finish with a bowl of peach ice cream.

“That’s me, a creature of habit,” Starnes sheepishly admits with a chuckle.

No offense, ma’am, but that’s not a creature of habit — that’s a creature of obsession. Not that there’s anything wrong with that.

“She’s been coming here since way before I was even involved with Mayberry,” says co-owner Mike Rankin, who began working at Mayberry in 1976. “She’s here every day during the week, and you can pretty much set your watch by her.”

Joining Starnes for lunch is her baby brother, 93-year-old Bruce Weavil, also of High Point. He began coming to Mayberry with his sister nearly a decade ago, after his wife died. Because he still drives, Weavil picks up his sister and drives them to Mayberry, where they are warmly welcomed by the staff — who know them by name — and by other diners.

Like his sister, Weavil already knows what he’s going to order. “I usually get a grilled cheese on sourdough,” he says, “but occasionally I mix it up a little bit and get a salad. I’m going to get a salad today.”

“Oh yes,” Weavil says, almost sounding insulted by the question. “We get a bowl of peach ice cream every day. They don’t even ask us; they just get it for us. I bet it’s already up over there at the counter right now. All they have to do is just bring it to us.”

That’s one of the perks of being a regular at a small, laid-back restaurant like Mayberry. You can walk in and tell the staff, “I’ll have my usual.”

And they’ll know exactly what that means.

In his decades of working for the Mayberry chain, Mike Rankin has met a lot of customers like Helen Starnes and Bruce Weavil. Well, maybe not quite like them — eating lunch at the same restaurant six days a week is a tad extreme — but regular customers who frequent Mayberry more than once a week are not the least bit unusual, he says.

“We’ve got certain customers where I can tell you that a particular car’s going to be parked in a particular space at almost the same time almost every day,” Rankin says. “They’re going to sit in the same place at the same counter stool every day, and most of them order the same thing. You can see their car coming and say, ‘Here comes Bob, and Bob’s going to get a cup of coffee, a cup of bean-and-bacon soup, and a hot dog all the way.’ He may eat it three times a week, but that’s what he likes.”

Because there’s such a down-home familiarity at Mayberry — and because the North Carolina-based chain’s retro decor and small-town aura conjure up a nostalgic feel of the 1950s or ’60s — you might assume the restaurant derives its family-friendly name from the fictional town made famous by “The Andy Griffith Show.”

Your assumption would be wrong, according to Rankin.

“Everybody you talk to, that’s the first thing they think: ‘Where’s Andy? Where’s Barney?’ ” he says. “A lot of people think that, but that’s not where the name comes from.”

The story Rankin has always heard involves the wife of a former Mayberry owner.

“I was always told that she made up the name Mayberry,” he says. “There was a particular flower she liked that bloomed in May, and it had berries on it, so that’s where the name came from. That’s what I was told, but whether or not that’s true, who knows?”

As for the rest of Mayberry’s name — Ice Cream Restaurant — it’s pretty clear where that came from. The restaurant offers a wide variety of soups and sandwiches — its bean-and-bacon soup is legendary. But the owners thought enough of their ice cream that they had to put it in the name of the restaurant. That ought to tell you something.

The High Point location, for example, has more than 30 flavors of ice cream, as well as specialty desserts, such as banana splits, hot-fudge sundaes, and old-fashioned milk shakes so thick you can eat them with a spoon. And for ambitious eaters — or small groups who don’t mind sharing — there’s Mayberry’s mountainous Lock, Stock & Barrel, which includes eight scoops of ice cream, four scoops of sherbet, slices of ice cream cake, a banana, multiple toppings, whipped cream, English walnuts, and an inverted ice cream cone to top it off. Indigestion pills not included for overindulgence.

The ice cream connection at Mayberry can be traced to when the restaurant chain was established in 1969. It grew out of several dairy bars that were in operation. The High Point location, for example, was previously Lindale Dairy Bar, and it was one of the city’s favorite spots for ice cream. Helen Starnes — she of the six-days-a-week Mayberry habit — remembers taking her children there back in the 1940s, when they were “tee-niny.”

Then her grandchildren joined the tradition.

“I’m 51, so I’ve probably been coming here that many years because I’ve been coming since I was in an infant seat,” says Ann Reece, Starnes’s granddaughter. “And when we were a little bigger, we would be in a booth, and the adults would drink coffee, and my cousin and I would get those little creamer cups off the table and drink those.”

Not surprisingly, when Reece had children of her own, she began bringing them to Mayberry, too.

“My sons (Walt and Harrison) have been coming here since they were babies,” she says. “We lived in Florida for their childhood, but anytime we would come home to visit, it was a tradition to bring them with Granny to Mayberry.”

Of course, families aren’t the only ones who establish traditions at Mayberry. Delbert Jones of Climax is part of a group that frequents the restaurant on Sunday evenings after church.

“We go just about every Sunday, and we’ve had as many as 23 people from our church to go at one time,” Jones says. “We just eat and fellowship, and we have a great time. Sometimes they have to run us out.”

Rankin, who began working at one of Mayberry’s Winston-Salem stores when he was only 15, has seen a lot of families and groups establish similar traditions through the years. He started out washing dishes — “with no intent of ever owning or operating a restaurant,” he says — and gradually worked his way up the chain. He went from dishwasher to cook, to ice cream scooper, to waiter, to assistant manager, to manager, to owner. During Mayberry’s heyday, when the chain had 42 restaurants spread throughout North Carolina and Virginia, Rankin was the chain’s troubleshooter, going to the locations that needed an experienced manager to get the restaurant operating properly.

Mayberry went through some organizational changes in the late 1970s and early ’80s, and eventually the chain began to dwindle. Today only seven Mayberry restaurants remain, three of which Rankin co-owns with his business partner, James Speight. Those restaurants are located in High Point — the one Rankin’s wife, Rita, helps run — and in Winston-Salem. Mayberry stores also operate in Thomasville, Reidsville, Burlington, and Greensboro.

Rankin says the Mayberry restaurants in existence today thrive in part because they have employees who remain as loyal to Mayberry as its customers. At the High Point location, for example, manager John Hansley has worked for Mayberry for 38 years. Ever the company man, when asked about Mayberry’s success, he says it’s due to old-fashioned friendliness and good food.

“Probably our No. 1 thing is consistency,” Hansley says. “Like our bean-and-bacon soup — it’s the same as it was 30 years ago. A lot of places change their menus over the years, but we haven’t really deviated much. If you got chicken salad here 30 years ago, it’s gonna taste the same today as it did back then.”

Rankin agrees. There’s just something about Mayberry’s continuity from one generation to the next that resonates with customers.

“To me, it’s about making memories,” he says. “I love seeing an elderly customer with their little grandchild, sitting at the counter sharing a milk shake together — that’s a memory. That kid’s gonna grow up and say, ‘I remember when Pawpaw brought me here. And we had a milk shake together.’”

Jimmy Tomlin lives in Greensboro and is an award-winning writer for the High Point Enterprise. His most recent story for Our State was “Fastest Monkey in the World” (May 2013).